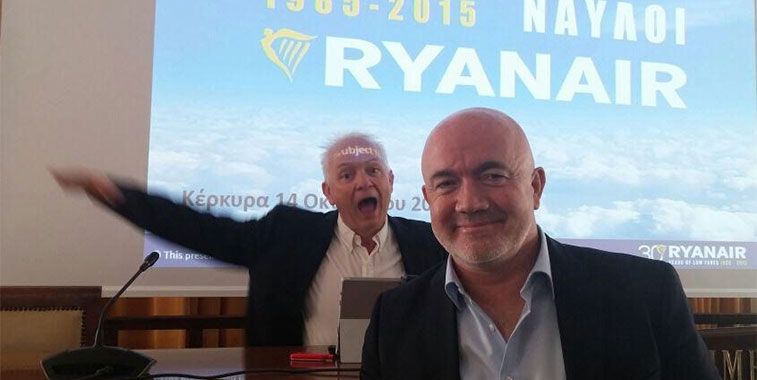 Ryanair’s Eddie Wilson (Chief People Officer) and David O’Brien (CCO) in Corfu on Wednesday, announcing Ryanair’s 75th base (and fourth in Greece), which will see the ULCC operating to 21 destinations from the island airport next summer, up from 13 this summer.

Ryanair this week announced that Corfu in Greece would become the airport’s 75th base from April 2016, and fourth in Greece, with one 737-800 allocated to the airport. Ryanair already has bases in Athens, Chania and Thessaloniki. The Irish ULCC began flights to Corfu from London Stansted in July 2011 and had launched an additional 14 routes before this summer.

Frankfurt Hahn and Oslo Rygge flights were suspended before this summer leaving 13 routes. However, flights from Billund ceased at the end of July as part of the airline’s change in operations in Denmark, while Bremen services end in early November. Flights to Rome Ciampino will be swopped for flights to Rome Fiumicino, one of the airline’s 11 planned new routes for next summer. Ryanair’s other new services for next summer are weekly flights to Bratislava, Budapest, Katowice, Poznan, Rzeszow and Warsaw Modlin plus twice-weekly flights to Birmingham, Cologne Bonn, Pisa and Venice Treviso. As a result Ryanair will operate to 21 destinations from Corfu next summer, which according to the airline will generate around 300,000 passengers per annum. So far all of these routes are known to be operated only on a seasonal basis.

Corfu Airport has seen passenger traffic growth in each of the last four years, including double-digit growth in both 2013 and 2014. As a result the airport handled a record 2.38 million passengers last year, finally surpassing the previous peak achieved in 2002. 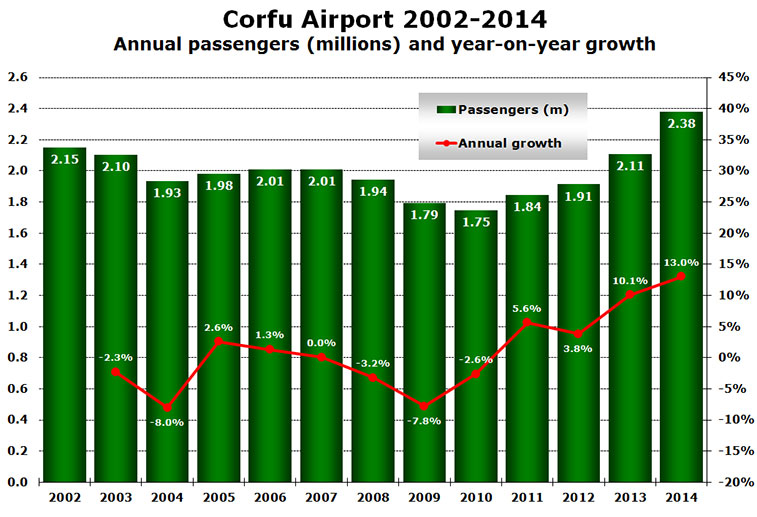 The airport suffers from extreme seasonality as a result of being primarily an airport for northern European holiday makers. Using anna.aero’s SVID calculator, Corfu Airport scores an extreme 122.73. In the first eight months of 2015 passenger numbers are up 3% compared with 2014, with traffic up in every month. 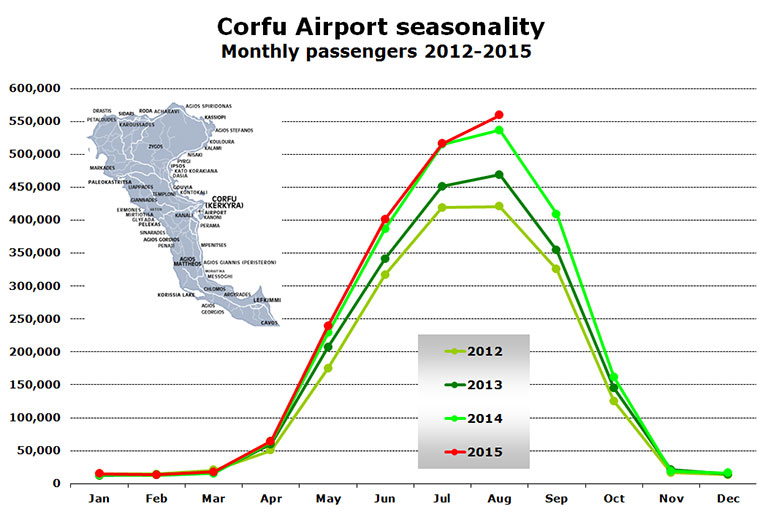