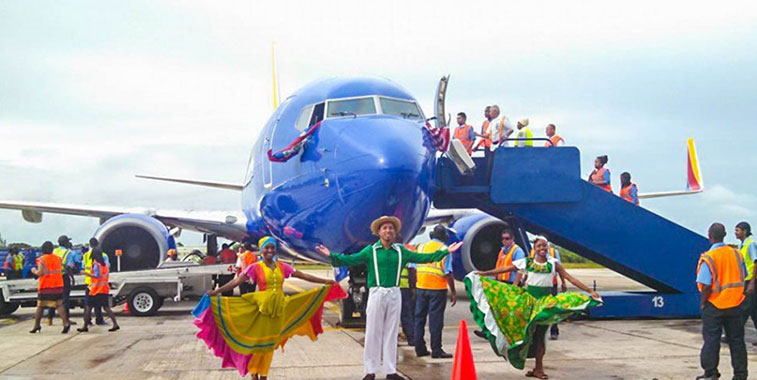 On 15 October, Southwest Airlines commenced services from Houston Hobby to Belize City. The 1,519-kilometre sector will operate daily and be flown by the airline’s 737-700s according to OAG Schedules Analyser data. The inaugural flight was met in Belize City with traditional dancing. Passengers at San Jose del Cabo were greeted at the gate with a free glass of beer before boarding for Houston. The airport was promoting the hashtag #CABO to promote the launch of services and also the region. People were also given a free Los Cabos goodie bag. Gary Kelly, Chairman, President and CEO of Southwest Airlines, along with Annise Parker, Mayor of Houston, greet and check the boarding cards of passengers boarding the first commercial international flight from Houston Hobby to Cancún, 1,273-kilometres away. Not only were passengers greeted onto the first international flight to Cancún at Houston Hobby by the Mayor and Southwest Airlines CEO, but they were also welcomed onto the new $156 million international pier at the airport by a mariachi band. The airport staff also got into the spirit by wearing special t-shirts captioned with ‘Houston, you have an option’ to highlight that the city now has two international airports.