Air Serbia is double the size of its predecessor Jat Airways; Zurich overtakes Paris to become number one route from Belgrade 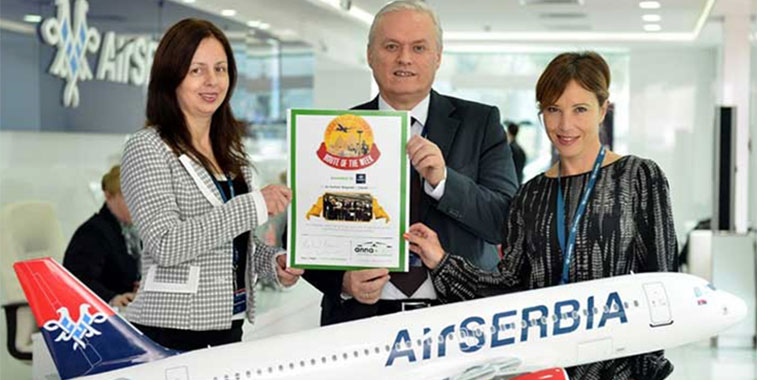 At the end of last year, Air Serbia received the Route of the Week Award in recognition of the airline’s launch of services between its hub in Belgrade and Zagreb in Croatia. Dane Kondić, CEO, Air Serbia commented on the award win by saying: “This award is highly symbolic for us, as it recognises the importance of the Belgrade-Zagreb route from the perspective of an international industry expert and for this we are thankful.” Currently, the link between the two cities is the carrier’s 12th largest route.

After its first full year of operations in 2014, Air Serbia recorded a net profit of €2.7 million, while total revenue increased by 87% to €262 million, and passenger traffic grew 68% to 2.3 million. During 2014 the carrier also introduced eight new A319s and two A320s into its fleet, and refurbished five existing ATRs. Formerly called Jat Airways from 2001-2013, and Yugoslav Airlines before that, Air Serbia was born when the former agreed a strategic partnership with Etihad Airways and the Government of the Republic of Serbia on 1 August 2013 as a direct result of the then ailing carrier trying to find economic support. Etihad signed a five-year contract for management of the newly founded airline, in which the MEB3 carrier would obtain a 49% equity share of the now Air Serbia. The aim of the new carrier is to become a regional leader, and to resume its place among the world’s best airlines. 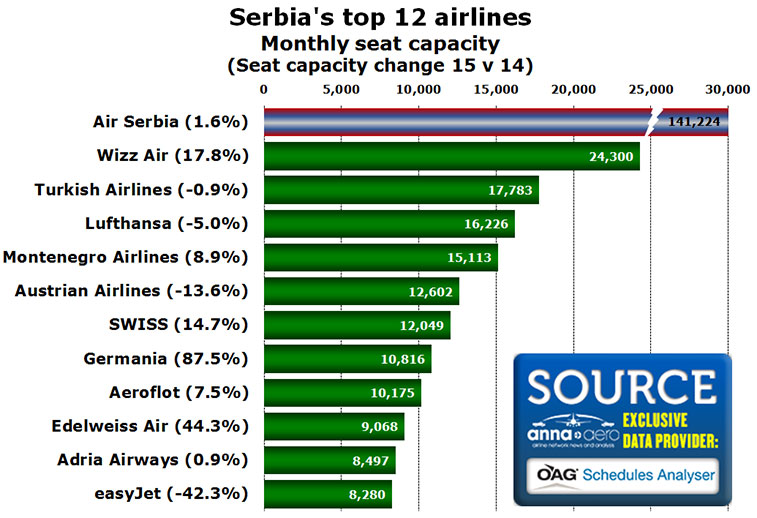 Air Serbia is twice as big as Jat

Over the past 12 months, Air Serbia has only recorded a growth in capacity of 1.6% based on OAG data. However, between 2013 and 2014 for the same time period analysed, the carrier grew by 48% meaning that over the past two years, the financial support of Etihad has helped the airline double in size in relation to its predecessor, Jat Airways. Overall, Air Serbia has nearly a five times bigger operation than Serbia’s second largest carrier Wizz Air, whereas two years ago, the then Jat Airways was only 1.8 times bigger. The result demonstrates just how much of an effect Etihad’s financial support has had in making sure that Air Serbia has reached its aim of becoming the regional leader in Serbia. 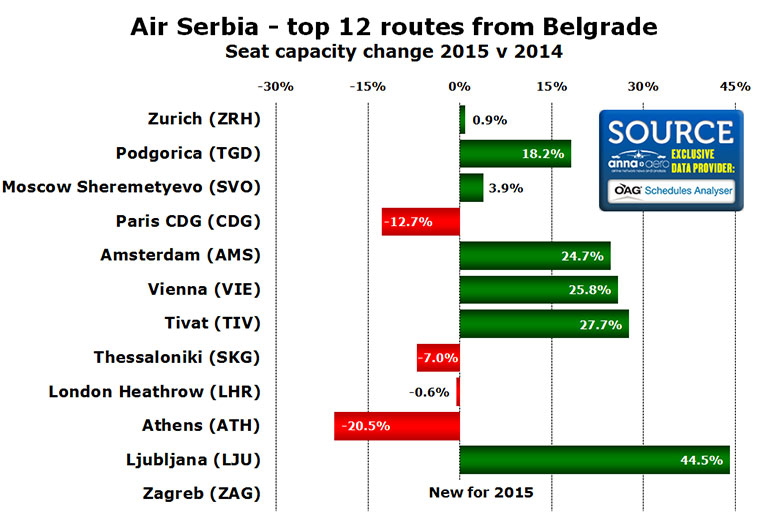 With a total of nearly 8,500 monthly seats on offer from Belgrade, services to Zurich have become the number one route for Air Serbia, helped by Paris CDG, which was number one last year, seeing a decrease in capacity of nearly 13% which is approximately just over 1,000 seats. Of the top 12 routes, the number one for growth was Ljubljana which now has an extra 1,700 seats a month according to OAG Schedules Analyser data. Overall, Air Serbia’s capacity is up 1.6% when compared to the same time period of last year, with Zagreb being the only new route.

Budapest and Larnaca services to end…

Despite a major turnaround and rebrand, it’s still not enough to make services to Budapest and Larnaca financially viable, with both routes ending on 25 October. In a statement about the cancellation of both routes, Dane Kondić, Air Serbia CEO, commented: “Air Serbia continuously evaluates its network to ensure it is in line with passenger demand and is commercially sustainable. These decisions will enable us to place greater focus on key areas of the business that demonstrate the strongest potential for sustained long-term growth”. Services to Budapest launched on 30 March last year, while Larnaca operations were inherited from Jat Airways’ network, where it had been a main feature for more than a decade. 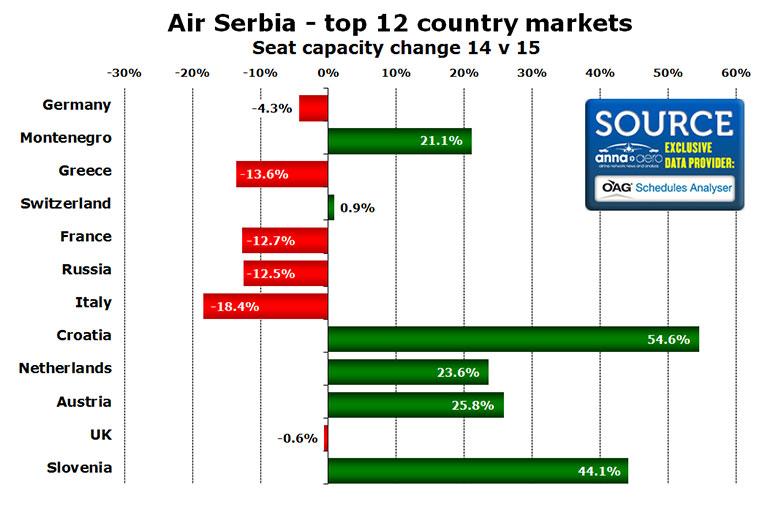 Croatia is the best performing market for growth

After recording growth in seat capacity of nearly 55%, Croatia is the best performing country market for Air Serbia in relation to growth this October. The only country market to see a growth close to this percentage is Albania. The 25th most popular country market for the airline from Serbia has recorded a growth over the past 12 months of 54%. At the other end of the spectrum, the worst performing country markets for growth are Macedonia and Romania, both of which are down 65% and 73% respectively. The only two country markets which see over 10,000 seats a month on offer from Serbia are Germany and Montenegro. Last year Greece, which then was also the second most popular country market, was also served by 10,000 plus seats per month based on OAG Schedules Analyser data. However by witnessing a nearly 14% decline in seat capacity, the country market with Serbia is only served by 9,600 seats. 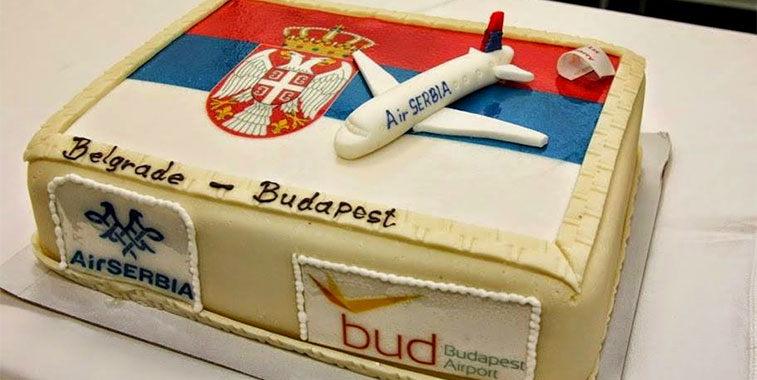 Services to Budapest, which launched on 30 March 2013, will cease to operate after 25 October. The short 303-kilometre service was operated daily using the carrier’s 62-seat ATR 72-200s. The airline Belavia will continue to operate services between the Hungarian capital and Belgrade according to OAG Schedules Analyser data.