Lufthansa and airberlin under growing pressure as German market growth picks up; Ryanair and Emirates both growing fast While Lufthansa celebrates 25 years of operations back in Berlin, airberlin is celebrating its major base at Düsseldorf with the recent unveiling of an “airdüsseldorf” branded A321. Germany’s two biggest carriers are both facing difficult times. Lufthansa is developing its low-cost subsidiary Eurowings to help fight against LCCs across Europe while airberlin, with its complex business model, continues to cut capacity as it searches for sustainable profitability.

Germany is Western Europe’s most populated country (with around 81 million inhabitants) and its most powerful economy. However, it ranks second behind the UK when it comes to annual passengers through its airports. Last year, Germany’s major airports processed over 208 million passengers (the UK handled over 240 million) an increase of 3% over the previous year. Demand for air travel grew strongly in Germany throughout the 1990s but since then has seen dips associated with ‘9/11’ and the global financial crisis in 2009. Since 2009 growth has been solid rather than spectacular with passenger numbers up only 9% between 2008 and 2014, not helped by the imposition of an environmental tax on all passengers. 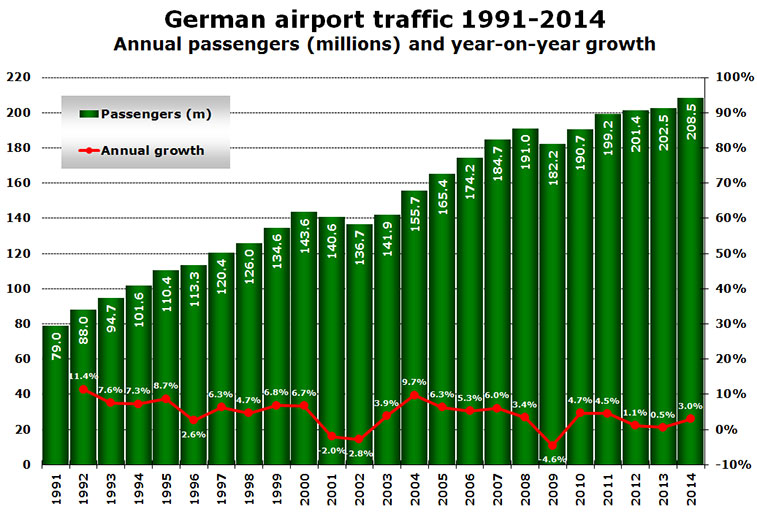 So far in 2015 (to August) passenger numbers at the major airports are up a healthy 4.6%. This is being driven by international traffic; demand to other European countries is up 5.0% while international traffic beyond Europe has grown by 6.2%. Domestic traffic is up just 2.1% with high-speed trains (and high-speed motorways) providing a viable alternative on a number of routes.

Among Germany’s top 20 airports just two are not reporting growth in 2015. Curiously both Bremen (down 2.2%) and Münster/Osnabrück (down 8.8%) have seen domestic traffic increase, but this has not compensated sufficiently for a decline in international passengers. Interestingly, growth is being driven by the smaller regional airports rather than the main hubs. All four of Germany’s busiest airports are growing more slowly than the national average of 4.6%. The country’s newest airport at Memmingen is also, so far this year, the fastest-growing (+13.8%). Two airports at which Ryanair is the dominant carrier, Frankfurt Hahn and Weeze, are both reporting growth of around 9% this year, highlighting the carrier’s growth in the German market. 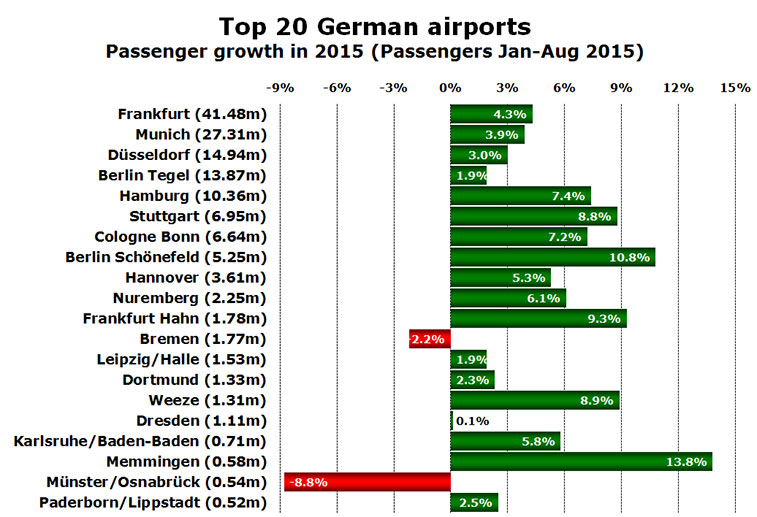 Analysis of government statistics for 2014 and 2013 reveals that Spain remains the leading international travel market for passengers from German airports. Spain is well ahead of Turkey, the UK, Italy and the US for annual passengers. Among the top 20 country markets in 2014 are five that are outside of Europe (shown in bright green). These are led by the USA followed by UAE, China, Egypt and Canada. Last year saw 16 of the top 20 country markets reporting growth with the exceptions being Sweden (-3.1%), Russia (-1.7%), Norway (-0.9%) and USA (-0.5%). Greece (+17.2%) and Denmark (+11.1%) were the only country markets to register double-digit growth among the top 20 markets. 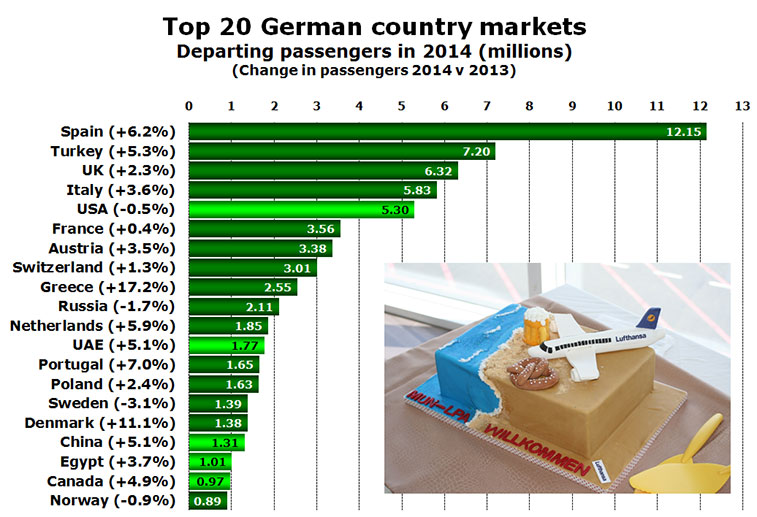 Analysing schedule data for May 2014, May 2015 and May 2016 reveals which airlines have been growing fastest in Germany this year, and which are currently expected to grow fastest next year. While Lufthansa which saw a small decrease in seat capacity this May, is set to grown marginally next year, airberlin has the dubious distinction of being the only airline to show a capacity reduction in both years. germanwings’ abrupt change in fortunes (from 20% growth to 20% decline) can be explained by the emergence of Eurowings which will gradually be taking over many, if not all, of the airline’s routes. With Berlin Schönefeld becoming a designated base later this week and expansion at several other German airports such as Cologne Bonn, Ryanair is planning significant growth in Germany for next summer. 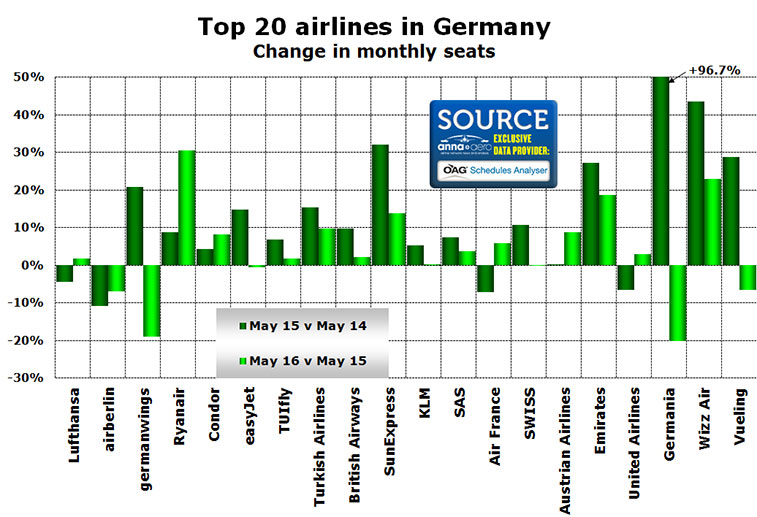 Emirates’ significant growth in both 2015 and 2016 is achieved primarily through the use of more A380s rather than other wide-body jets in its fleet. Given Germania’s rapid growth in 2015, its apparent cuts in capacity in 2016 may be due to not having all of its schedule data sorted yet. Meanwhile, Wizz Air is the only carrier among the top 20 to record more than 20% growth in both May 2015 and May 2016.

More infrastructure on the way (eventually)

To cope with further growth in air travel demand Germany’s busiest airports are enhancing their infrastructure. Frankfurt recently started work on T3 (which should be opened in 2022), while Munich has finally been given permission to build its third runway. And at some point Berlin’s new airport may even become operational. 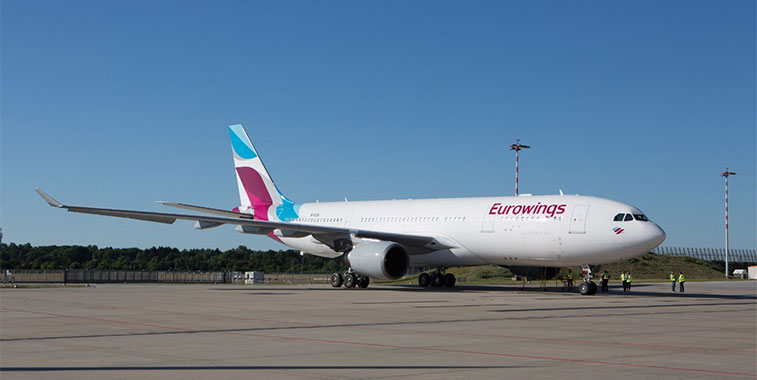 Eurowings will initially complement germanwings by opening a new base in Vienna (using A320s) and operating long-haul services from Cologne Bonn (using two A330s from SunExpress and one 767 from TUIfly). A320s in Eurowings livery have been operating on behalf of germanwings with germanwings flight numbers since February.