On 23 October, Chinese President Xi Jinping and British Prime Minister David Cameron visited Manchester Airport to announce a new direct link between the UK’s third largest city and Beijing. The route will be flown by Hainan Airlines with a four times weekly schedule and be flown by the carrier’s A330s. At the same time, it was also announced that China would invest £130m towards a ‘China Cluster’ at Airport City Manchester. The investment will provide a commercial base for Chinese businesses arriving in the UK and offering a wide range of high quality office premises. The China Cluster will be based around two campuses within the Airport City development – Wuhan Square and Shenzhen Gardens – together totalling 45,000 square metres. Charlie Cornish, CEO of Manchester Airports Group (MAG), said at the press conference: “Today’s announcements are clear evidence of the vital economic role that Manchester Airport plays both nationally and regionally within the UK. The North is playing a leading part in heralding a golden era of economic co-operation between the UK and China and we are delighted that His Excellency Xi Jinping and the Prime Minister, the Rt Hon David Cameron were able to join us in unveiling Airport City’s £130 million ‘China Cluster’ investment and also Hainan’s new direct scheduled services to Beijing.” On 21 October, KLM and Air Malta inaugurated their code-share agreement. The code-share, which started this summer, saw KLM placing its code and flight numbers on flights operated by Air Malta between Malta and Amsterdam. Commenting on the agreement Joseph Galea, Air Malta’s Deputy CCO said: “We are very excited with this new code-share agreement. Since July, when we started operating this code-share, we have had a very good response from our mutual customers. Both Air Malta and KLM share the same service commitment towards their customers and this agreement was a natural step for us after launching the code-share with Air France last year. This code-share comes at a particularly significant time for Air Malta, when we are celebrating our 40 years of operations to Amsterdam Schiphol. Seen cutting the cake are: Bruce Dönszelmann, KLM’s VP of Alliances, and Joseph Galea, Air Malta’s Deputy CCO. 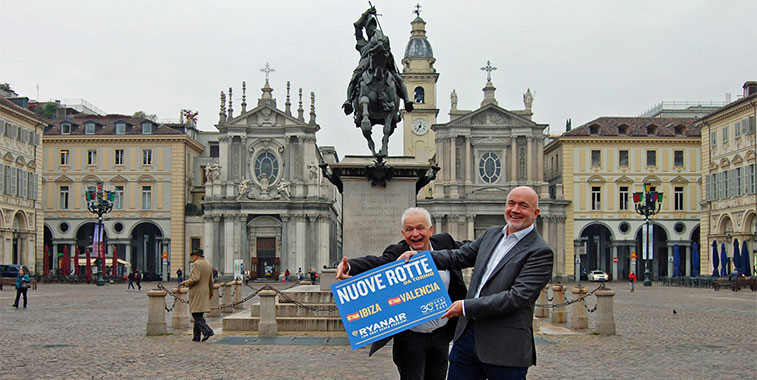 On 28 October, Ryanair announced that next summer it would commence two new routes from Turin to Ibiza and Valencia in Spain. Celebrating the news in Piazza San Carlo in Turin are Eddie Wilson, Chief People Officer, Ryanair and David O’Brien, CCO Ryanair. On 27 October, Flybe commemorated its first year of operations at London City Airport by adorning a tree installation with 365 hand-crafted purple origami aeroplanes containing a host of prizes. Travellers passing through the airport were encouraged to visit Flybe’s aptly named ‘Tree of Flight’ to select a celebratory paper plane in a bid to win a prize, which included free flights, Flybe teddy bears and model aircraft. On hand to cut the cake celebrating the anniversary were: Paul Willoughby, Regional GM for the UK South, Flybe, and Matthew Hall, CCO London City Airport. On 22 October, easyJet announced that it would start seven new routes from Naples next summer to Amsterdam, Barcelona, Cagliari, Lyon, Menorca, Prague and Vienna. In addition to these new routes, the airline also committed to basing a fourth aircraft at the airport. On 25 October, British Airways inaugurated A380 services on its route between London Heathrow and Miami. The Floridian airport celebrated the inaugural A380 service by carrying out a ribbon cutting ceremony and having a cake. On 28 October, Monarch Airlines announced that for the month of November 2015 it will be known as ‘Mo-narch’ in support of Movember; the global campaign, which creates positive change for men’s health through raising awareness and education. For the first time in the company’s history, the iconic ‘spotty M’ will be replaced with a tache version and three of the aircraft in the airline’s fleet will be sporting upper lip-holstery for the month. Supporting the campaign by showing off his tache is Andrew Swaffield, Monarch Airlines CEO. On 17 October, Iasi Airport opened its new terminal. Called T3, it is part of a larger project designed to modernise the whole infrastructure of the airport. The building is 3,600 square metres, has six check-in desks and a processing capacity of 320 passengers during rush hour. The building was completed in less than eight months and cost €11 million.