Dubai Airport is the fastest-growing in the world this winter as measured by additional weekly seats when compared to the start of the winter season 12 months ago. Helping the airport to achieve this title is Sichuan Airlines, which on 4 September launched twice-weekly flights to Dubai from Chengdu via Yinchuan.

With the Northern Winter season (W15/16) having commenced on Sunday 25 October, anna.aero decided to take a detailed look at which airports, airlines and countries have seen the biggest year-on-year change in available seat capacity (in absolute terms not percentage terms) at the start of the winter season, compared with the same time period a year ago. This analysis comes when over 100 new routes are starting across the globe in time for the start of W15/16. Airlines are constantly adjusting their planned capacity so this analysis is really only a snapshot, and a similar analysis done for the first week of December or January would produce different figures, though the rankings are likely to be broadly similar.

Dubai Airport is #1 however Istanbul is the fastest growing city

Although Dubai is the number one airport in relation to additional seats on offer at the start of the W15/16 season, helped by the recent arrival of Sichuan Airlines’ twice-weekly service from Chengdu via Yinchuan, it is Istanbul as an overall city destination that has the biggest increase in overall seat availability. Between the city’s two airports, Istanbul is reporting an additional 138,000 seats compared to Dubai’s extra 87,000 seats. What should also be noted is that Istanbul Sabiha Gökçen has also recorded the biggest increase in seat capacity for its size at nearly 25%. As can be seen from the graph, seven of the top 10 airports that are reporting the biggest net increase in seats for the start of W15 are located in Asia, with Los Angeles and Istanbul’s two airports in seventh, fourth and sixth being the only airports outside of the region. Within the top five, three of the airports are hubs for three of the biggest airlines in the world, Emirates at Dubai, Turkish Airlines at Istanbul Atatürk and Qatar Airways at Doha. What is interesting to note is that Atlanta has seen the least amount of growth in relation to its current capacity when compared to other airports in the top 20.

Orlando Airport is the fastest-growing hub in North America when compared to Los Angeles and Atlanta, while Istanbul Sabiha Gökçen is Europe’s fastest-growing. Coincidentally, the Turkish airport was also named as the airport which had achieved the biggest growth in the over 10 million passenger category in the recent European ANNIE Awards. What should also be noted is that despite Dubai growing more than Doha and Abu Dhabi in terms of additional seats, the fellow two MEB3 hubs are showing growth percentages that are greater than the world’s largest international passenger airport. 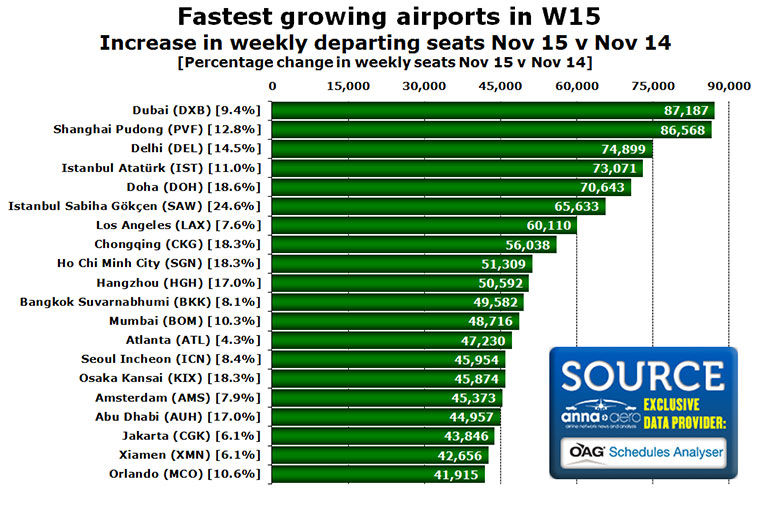 Helping contribute to Istanbul Sabiha Gökçen’s title of being the fastest growing airport within the top 20 is Borajet Airlines which added a thrice-weekly service to Batumi on 4 September. Also contributing to this growth was national carrier Turkish Airlines, which has added service to Bahrain and Venice this summer from the airport.

Of course within aviation, not all airports can be winners. At the other end of this ranking are the airports with the biggest decrease in weekly seat capacity, with the title at the start of this W15/16 season going to Moscow Domodedovo. The airport, one of three to serve the Russian capital, is showing a net loss of 37,000 seats when compared to the start of W14/15, while fellow Russian Airport St Petersburg is down by nearly 21,000. However, in relation to existing capacity, Tehran Airport has seen an overall decrease in seat capacity of approximately 35%. One surprising addition to the decrease list is Guangzhou in China, which is down by 21,000 seats. However, this only represents 3.2% of the airport’s capacity.

Now although some airline schedule tweaking is still occurring as the northern hemisphere heads into the winter season, it still comes as a surprise to see Ryanair at this moment in time recording a larger increase in net seats than its US alter ego, although it is only by 500 seats at this point which means that Southwest could still grow more than the Irish ULCC. Last year Southwest was recorded as the largest growing airline in relation to additional seats going into the start of W14. However, this was due to its absorption of AirTran Airways. When we compare the two airlines in relation to percentage growth however, Ryanair’s is nearly twice the amount of Southwest. However, when compared to net seat increase it just shows how much bigger the American carrier is than its European counterpart.

When looking into the Asia region, we see that the number one airline for growth is Xiamen Airlines with 53% growth, or 258,000 extra seats. The carrier has expanded rapidly this summer and has introduced new markets to its route network, helped by the introduction of the 787-8 into its fleet.  Earlier this year, anna.aero was fortunate enough to be invited to the launch of Xiamen Airlines first European service to Amsterdam from Xiamen. Later this year the carrier will add services to Sydney from Fuzhou on the 29 November, and from Xiamen on 5 December. 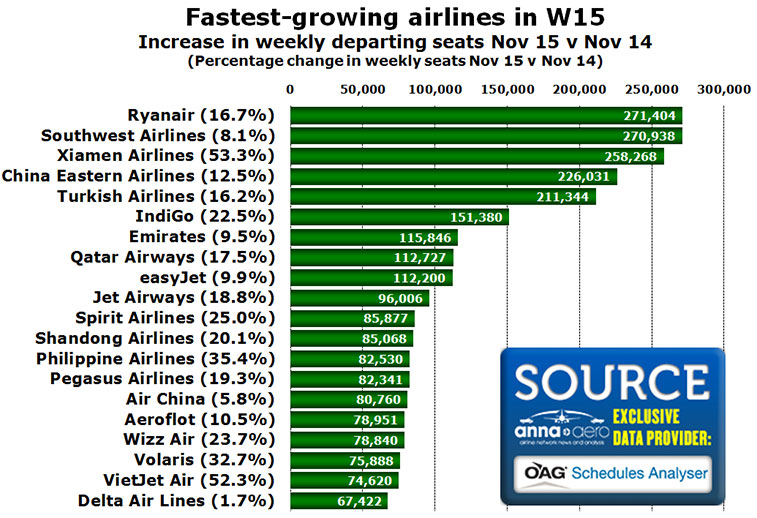 When we look at the big MEB3 battle, we can see that only Emirates and Qatar Airways have made it into the top 20, with Etihad Airways just missing out finishing in 21st with an additional 67,392 seats. However all of them have been outperformed by Turkish Airlines, which has added nearly 100,000 more seats than its nearest rival Emirates. What can also be taken from this data is that with Emirates adding 115,000 seats to its network this winter, just under 30,000 seats have been lost by other carriers at Dubai as the Emirates hub is only recording a growth in net seats of 87,000. Both Amsterdam Airport and Xiamen Airlines celebrated winning the Route of the Week award earlier this year for the launch of the carrier’s service from Xiamen. Going into the start of the W15/16 season, the airline is recording a growth of 53% in its seat availability. The result means that in relation to net seat increases, the airline is the third largest growing carrier going into this winter season.

China is #1 once again

In case anyone was in any doubt about where civil air transport was growing fastest, the analysis by country market makes it clear. It’s China, which is up by over 900,000 weekly seats when compared to the start of W14/15. Once again, the US is recording the second largest increase in seats, the same position it achieved last year when anna.aero did this analysis. What is interesting in this analysis is the development of the Indian market, which is up 11% when compared to last year, where it only achieved 4.0% growth. 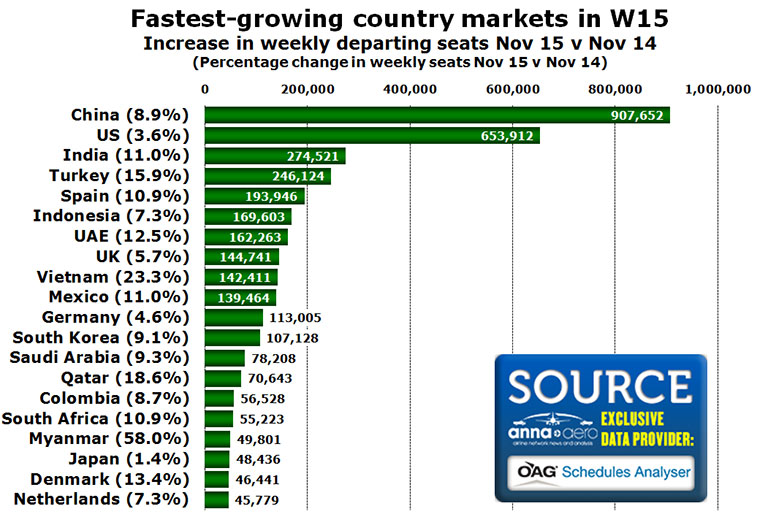 Chicago Mayor Rahm Emanuel officially opened Chicago O’Hare’s latest new runway on 15 October. Runway 10-Right/28-Left is located on the far south airfield and is expected to handle primarily flights arriving from the west, and is expected to handle 11% of the airports daily arrivals. Overall going into the start of the winter season, US seat capacity is up 3.6% which is just over 650,000 seats, while Chicago O’Hare’s capacity is up 3.8%, or 31,700 seats.