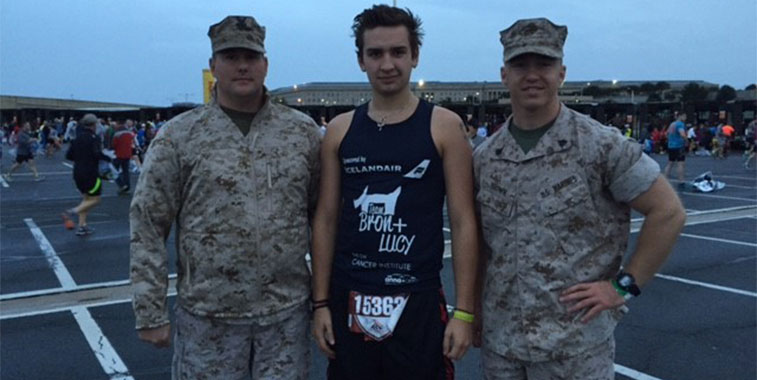 Icelandair, forever launching new routes on both sides of the Atlantic, most recently to Orlando in September, was the exclusive sponsor of anna.aero’s TeamBron in Washington DC’s 40th Marine Corps Marathon on 25 October, raising a considerable sum for the George Washington University (GW) Cancer Institute, a research organisation with global benefits.

anna.aero’s  “TeamBron” raises money for a variety of cancer causes in celebration of the life of the publisher’s 12-year-old daughter, Brontë, who lost a long battle with leukaemia in 2011.

As its name suggests, the Marine Corps Marathon is organised by the US military and fittingly starts and finishes at the Pentagon. That aside, the course, while featuring more hills than most marathons, isn’t as particularly gruelling as you might expect and, in fact, majors on a tour of all the obvious Washington DC monuments and sights. This didn’t prevent the regular father-son TeamBron crew (anna.aero Publisher Paul Hogan and Max – a student of Marymount University in Arlington VA) logging some pretty dreadful times on the day. 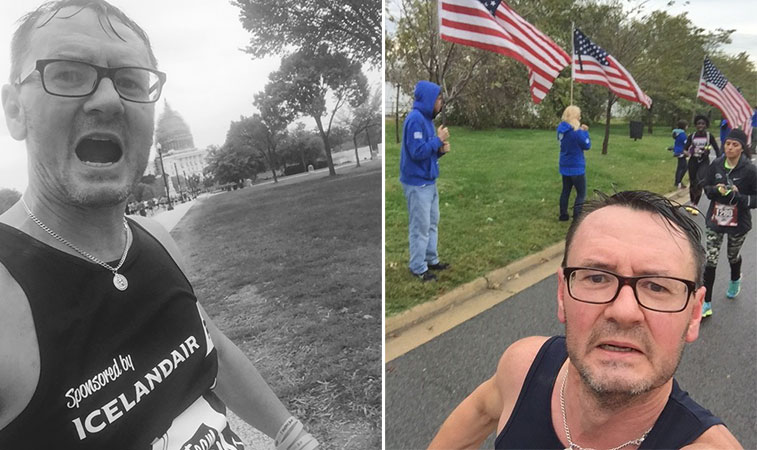 Selfie destruct: The anna.aero Publisher looks like he’s going to die here and also seemed to have switched his camera to black and white as his brain dissolved, but the Marine Corps Marathon isn’t as gruelling as you might expect and takes in all the main sights. However, directly across the Potomac from Reagan Airport is a spectacle only the runners see: “The Wear Blue Mile” comprises American flags each draped with a black ribbon, bearing the name of a fallen military member.

“I missed my family cheering station at Watergate and had to run backwards 500 metres to find them,” grovelled the 50-something anna.aero Publisher. However, even assuming he lost the best part of 10 minutes on this task, it doesn’t quite explain how he put in his dismally slow time of 4 hours 29 minutes – his 10th fastest time in his 10th marathon. “The worst aspect of this is that I wasn’t racing against the other 30,000 entrants, I wanted to beat Budapest Airport CCO, Kam Jandu, who completed the Chicago Marathon earlier this month in a time of 4 hours 27 mins. Raising the money is all very well, but this is the first time I have lost to my wicked adversary. I’m inconsolable,” said the aging, but not particularly mature, publishing executive. 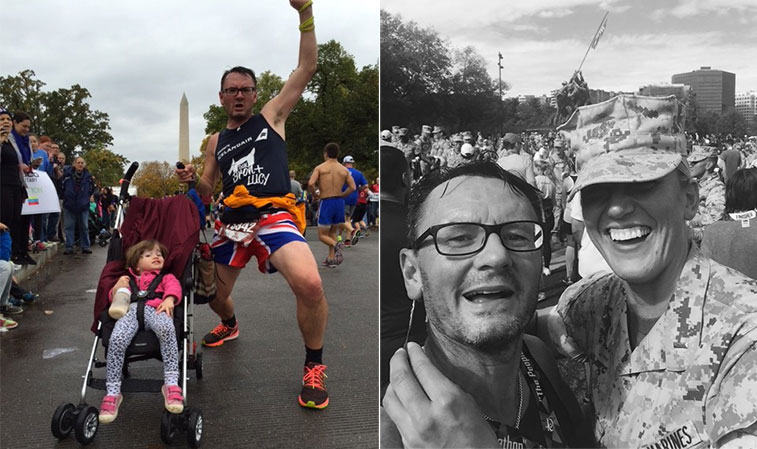 The Publisher’s daughter Queenie B (the B is for Brontë) was right to look underwhelmed by anna.aero’s poor late arrival on The Mall at mile 19. The Marines provided a warmer reception – and a medal to treasure – at the finish in the shadow of the Iwo Jima monument (from which the logo of the Marine Corps Marathon takes its inspiration).

With 14 current North American destinations, and two more to launch next year (Chicago O’Hare and Montreal), Icelandair is now a major recognised brand in North America, especially in Washington DC where the Metro system is heavily decorated with Icelandair advertisements enticing customers to make an Iceland stopover en-route to its 20 destinations in Europe. “The team received constant shouts of ‘come on Icelandair’ which was a bit curious when we first heard it and we looked around to see who they were shouting at. When we realised it was for us we became immediately proud to represent an airline which continues to expand its route network in such a creative and enterprising way.” (Although Hogan also later expressed concern that the many spectators in the American capital didn’t all think that Icelandair representatives were as slow as the anna.aero team were on the day.)

“We’re all incredibly grateful to Icelandair – the CEO himself, Birkir Hólm Guðnason, engineered this sponsorship package together with Thorsteinn Egilsson, General Manager – The Americas, and Michael Raucheisen, Marketing & Communications Coordinator, Icelandair USA Marketing. anna.aero thanks Icelandair, George Washington University Cancer Institute thanks them, and the benefiting families thank them for their generosity, and for being such great characters and sports,” said Hogan. 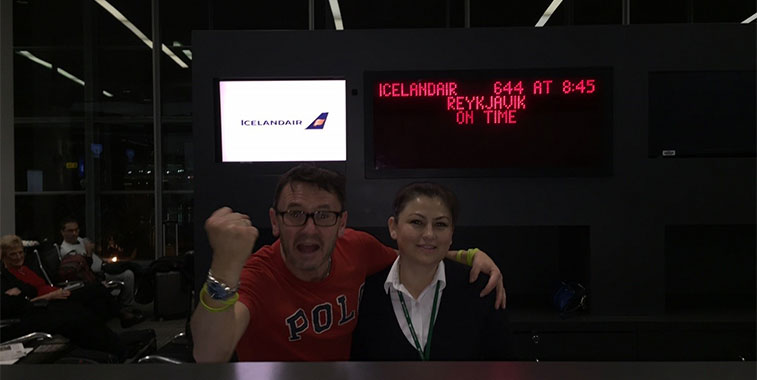 Just go now: The Icelandair ground crew at Washington Dulles look distraught at the Hogan send-off. Unfortunately, his own Marine Corps Marathon performance was not as punctual. With 16 North American destinations in service or about to launch, Icelandair is now a major recognised brand, especially in Washington DC where the Metro system is heavily decorated with Icelandair advertisements enticing customers to make an Iceland stopover en-route to its 20 destinations in Europe.