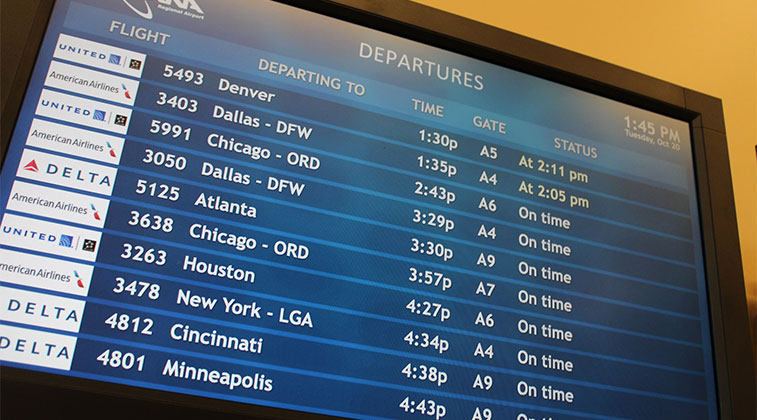 After sponsoring the Sixel Airports Conference, Northwest Arkansas Regional Airport and its Airport Director Kelly Johnson will be hoping for a few more destinations on this departures board in the months to come. With three gates still free for a new or existing customer to use at the regional airport, perhaps one of the 10 airlines attending the event will deliver the next new route to Northwest Arkansas.

In a corner of Arkansas, the northwest corner to be precise, Sixel Consulting Group (SCG) held its bi-annual Airports Conference this week, giving 45 small and medium-sized US airports the opportunity to talk air service development with 10 US airlines, ranging from behemoths like American Airlines and Southwest Airlines to regional carriers like Cape Air and Glo. The event sponsor and local facility, Northwest Arkansas Regional Airport, was also able to showcase its small, but perfectly formed, terminal which currently handles 1.3 million passengers per year. As official media partner, anna.aero’s Editor Marc Watkins attended this US domestic route development conference last week to learn more about the event, as well as informing the airport delegates on how anna.aero can help promote air service development opportunity and success to the network planning community. Access all areas. The Sixel Airports Conference programme kicked-off with a tour of the impressive, 1.3 million annual passenger handling, Northwest Arkansas Regional Airport terminal on the Tuesday afternoon. Part-time tour guide and Airport Director Kelly Johnson (she wears many hats) informed the visitors that the airport is home to the only two travellators in this part of Arkansas! 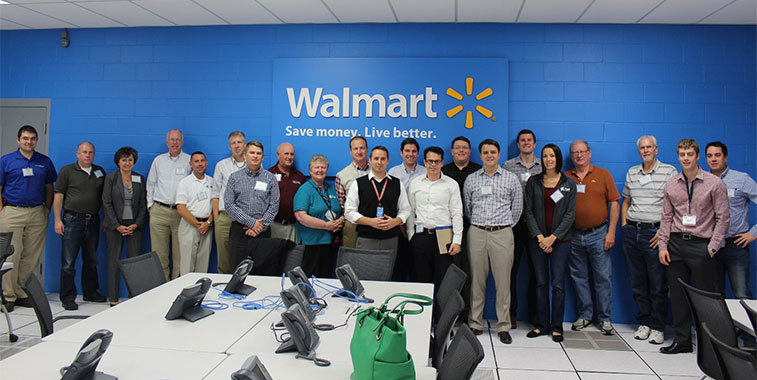 For those of you that don’t know, Bentonville in Northwest Akansas is the home of Walmart – the world’s biggest retailer ‒ with 5,000 stores in the US alone. On the first afternoon of the conference, delegates were able to visit its modest HQ and to experience its Emergency Operations Center. Thanks to Walmart’s Emergency Operations Centre team, and in particular Lucas McDonald (a former TV weatherman), for their insight and time. 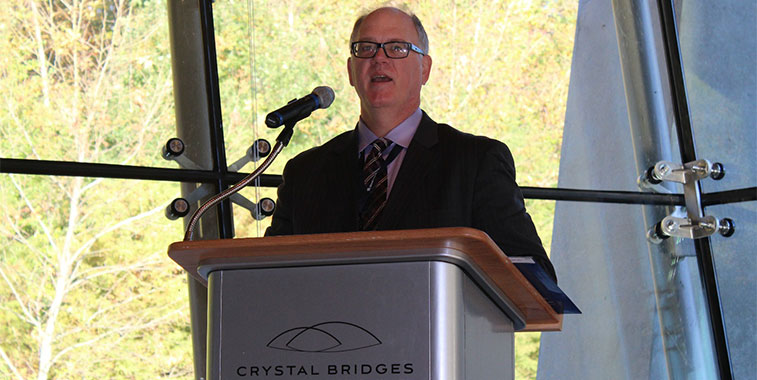 The second day of the Sixel Airport Conference was opened by Mark Sixel, President of the Sixel Consulting Group, who thanked delegates and sponsors for creating a record attendance at the event. The venue for the morning’s activities was the splendid Crystal Bridges Museum of American Art. Delegates were able to wander through the halls and soak-up some of America’s finest native art. 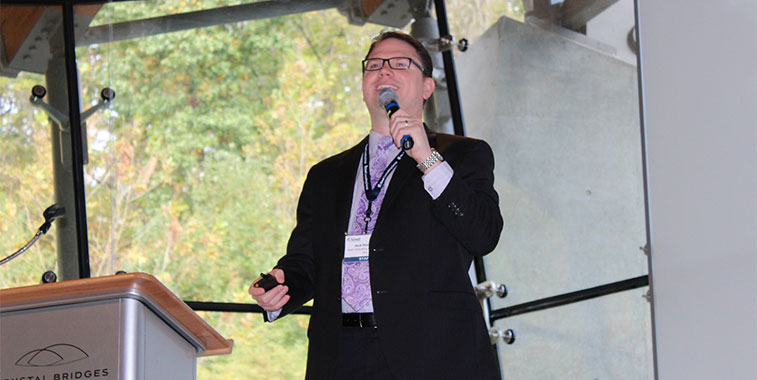 The first concurrent session on the Wednesday afternoon was titled ‘Building Your Airport Brand from the Inside Out’ which was presented by Jeremiah Gerald from Sixel Consulting Group. While he covered concepts including getting the airport’s logo right, his co-presenter Eric Peterson from Architecture Alliance told the full house that airport building itself also needs to reflect its brand position and that each one needs to adopt its own sense of place. 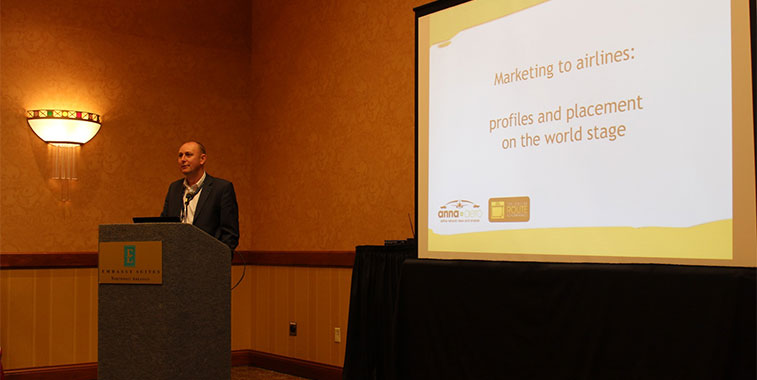 anna.aero’s Editor Marc Watkins gave the attending small and medium-sized US airports an insight into how the website and newsletter can help promote their air service development priorities to US and global airlines’ network planners. Essentially it boiled down to two things – cake and fire truck water arches! 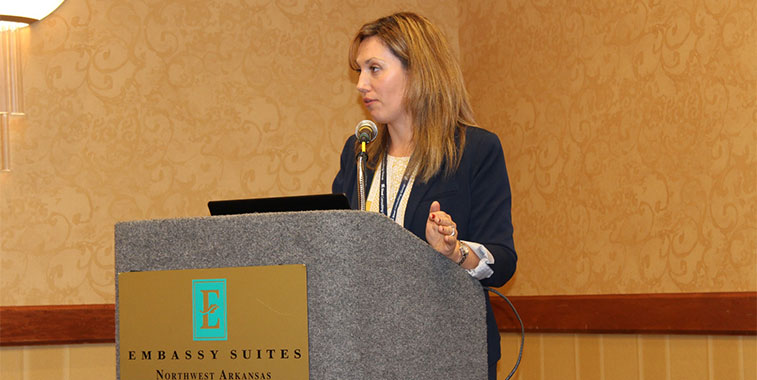 Yuliya Crane from Sixel Consulting Group had the unenviable job of following anna.aero’s Watkins. Her presentation was concerned with data analysis and forecasting, and how airports can better understand and quantify their market. It also covered what information airlines are looking for when making a new route decision. She told delegates that airport catchments are elastic – for example, the catchment for long-haul routes will be bigger than those for low-cost services to popular, well-served destinations. 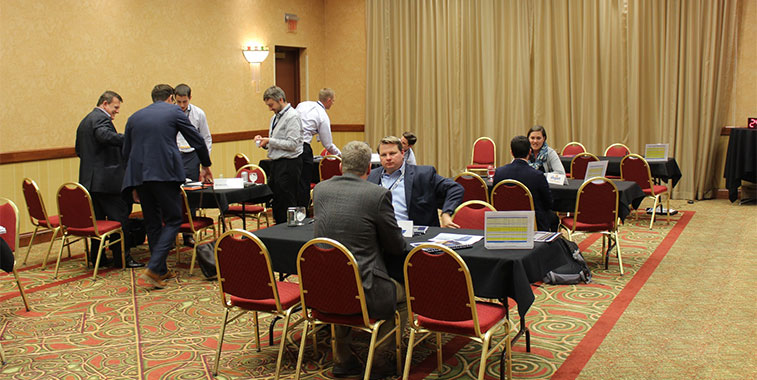 Although the educational seminars were drawing plenty of delegates to the separate conference room, the real business – the one-to-one meetings between the gathered airline and airport attendees – was taking place in an adjoining room. Hundreds of individual route development discussions took place over the Wednesday and Thursday of the event. 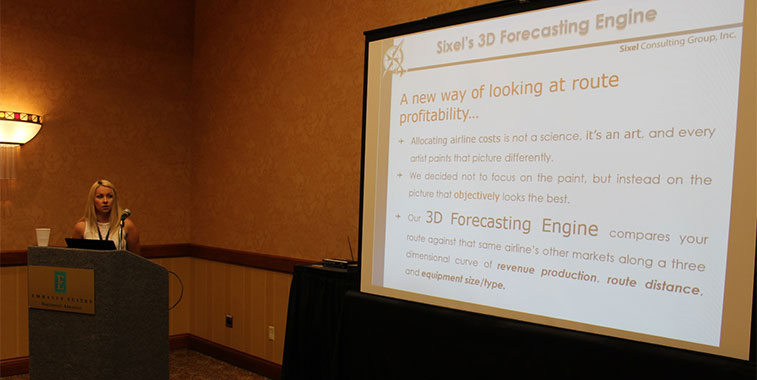 Ilona Cambron used the event in Northwest Arkansas to debut the Flight Profitability Tool which is being launched by Sixel Consulting Group (SCG). Using the tool, your route network gets a monthly profitability grade of A, B, C, D or F depending on how your routes are performing. Naturally, SCG would be only too happy to help airports ensure that they make the grade and don’t flunk out. 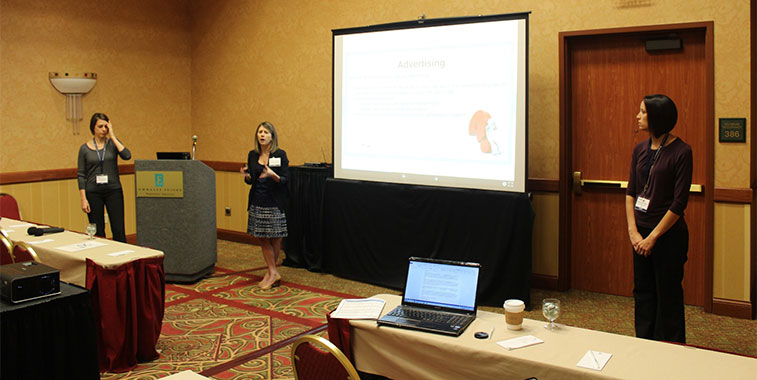 My airport just announced new air service. Now what? Well Sixel Consluting Group’s Sabrina LoPiccolo, Elizabeth Flores and Melissa Galvan Peterson were only too happy to tell you how to handle that on the third and final day of the conference. Their collective advice was to work with the airline marketing team to discuss a roll out plan and to decide who will be creating the advertising for placement. This session was followed up with another 25-minute presentation entitled ‘What to do when the incentive/honeymoon period is over’ which covered the next stage of the start-up phase of a new route.