Turkish Airlines continues to help make Istanbul Atatürk the airport with the widest network of destinations in the world. In the last 12 months the Star Alliance carrier has added new service to over a dozen destinations, including Miami, Karlsruhe/Baden-Baden, Porto and Taipei. As a result, Turkey’s busiest airport now has non-stop flights to almost 260 destinations.

Last week anna.aero revealed which airlines, airports and country markets were seeing the biggest volume increase in seat capacity this November compared with last November. This week we split the world into three geographic regions (Asia, Europe and North America) and analyse the available schedule data to determine which airports in each region have seen the biggest net increase in destinations served this November compared with last November. It should be remembered that this is just a snapshot, and that a similar analysis for any other of the winter months would probably produce slightly, but not significantly, different results.

After a dominant ‘win’ last year, Istanbul Atatürk has again managed to report the biggest net increase in destinations served this winter. Last year the winning margin was 10 routes, this year just one, with Gran Canaria in the Canary Islands running the Turkish mega-hub close. In the case of Istanbul’s biggest airport that brings the number of destinations served non-stop from the airport this winter to a whopping 258, more than any other in Europe (Frankfurt is second this winter with 229 routes), and the most of any airport worldwide. 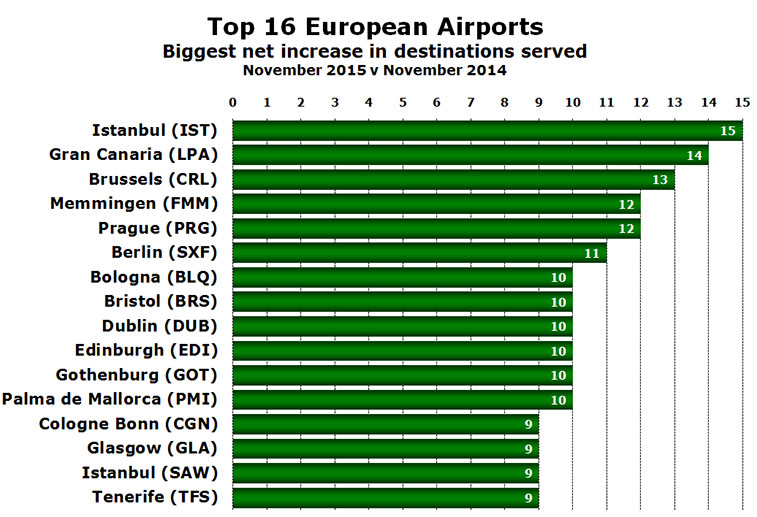 Fully 12 of the top 16 airports for network growth this winter are Ryanair bases; Bologna, Bristol, Brussels Charleroi, Cologne Bonn, Dublin, Edinburgh, Glasgow, Gothenburg, Gran Canaria, Palma de Mallorca, Tenerife South and the airline’s most recently opened base at Berlin Schönefeld. The only airports that are not Ryanair bases are the two Istanbul airports plus Memmingen and Prague. 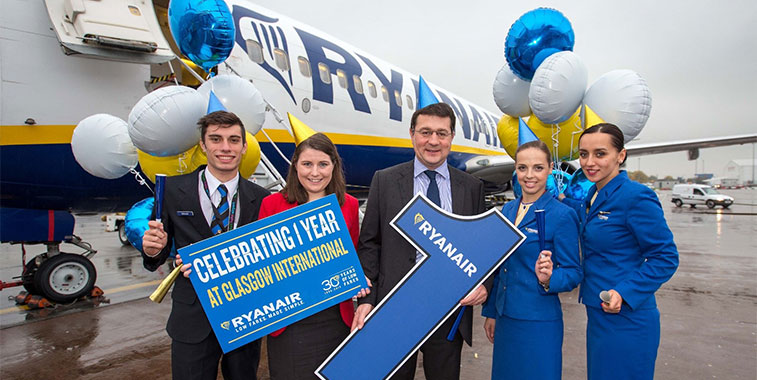 Ryanair has a base at 12 of the 16 fastest-growing European airports (for network expansion) this winter including Glasgow, where the ULCC recently celebrated its first anniversary and launched a route to Berlin Schönefeld, its newest base, and the airport ranked sixth for the biggest increase in destinations served this winter.

In North America (which in our analysis also includes Mexico and the Caribbean) the abolition of the Wright Amendment in October 2014 has seen Dallas Love Field Airport offer an ever-growing range of destinations to its customers. Since last November the number of destinations reachable non-stop from Love Field has increased by 17 from 34 to 51, all of them still in the US. New destinations include Boston, Charlotte, Detroit, Memphis, Portland, Pittsburgh, Salt Lake City, San Jose and Seattle. 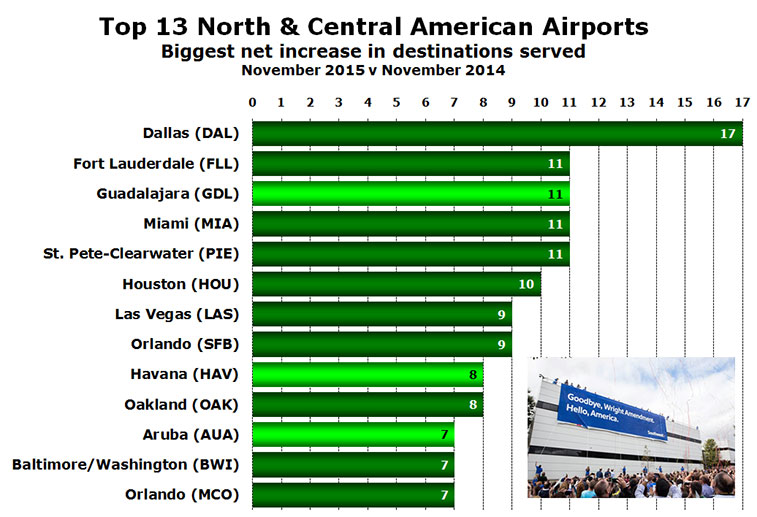 There is a four-way tie for second place with three airports in Florida and one in Mexico all gaining a total of 11 new destinations since last November. In fact, with both Orlando airports also making the grade, Floridian airports account for five of the top 13 fastest-growing US airports this winter, as measured by network size. Apart from Guadalajara, two other non-US airports (highlighted in bright green) also make the top 13; Aruba and Havana.

As with Ryanair in Europe, many of the leading airports in this region benefit from the presence of Southwest Airlines. Houston Hobby has certainly benefitted thanks to the launch of international flights with Southwest in recent months. 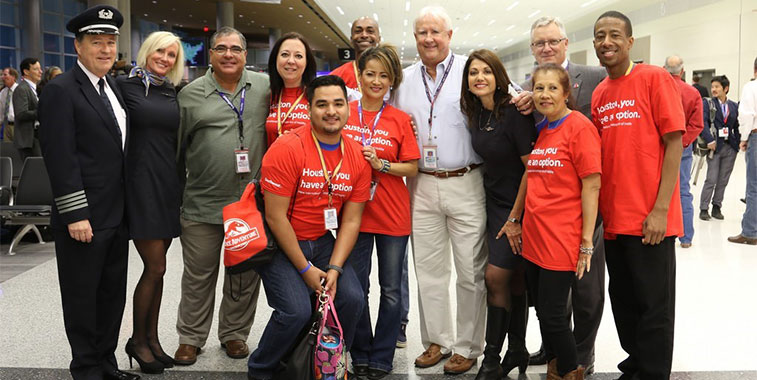 The recent launch of international services from Houston Hobby Airport in Texas by Southwest Airlines led to the airline handing out t-shirts with the slogan “Houston, you have an option”. The legendary US LCC launched routes to Belize City, Cancún, Mexico City, Puerto Vallarta, San Jose (in Costa Rica) and San Jose del Cabo on 15 October 2015.

Chinese airports continue to dominate the rankings in the Asian region this winter. Last winter they claimed 10 of the top 12 positions, while this year the figure is 13 of the top 16. Despite this dominance though, the airport with the biggest net increase in destinations is Osaka Kansai Airport in Japan. Its range of non-stop destinations served has grown from 59 last November to 78, for a net gain of 19. Most of Osaka Kansai’s new routes are to destinations in China, though most are served with less than daily frequency. 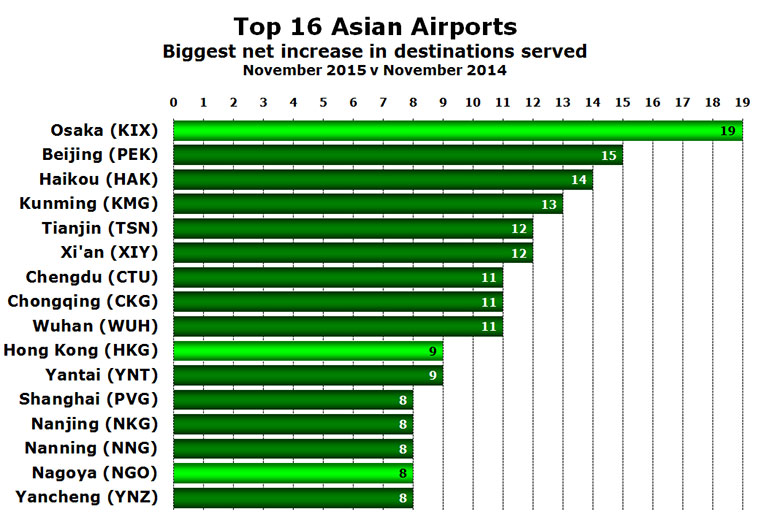 Despite already being connected to 214 destinations with non-stop flights last November, Beijing’s main airport (and the world’s second busiest in terms of annual passenger throughput after Atlanta) increased its network to 229 destinations. Hong Kong and Nagoya are the only two other non-Chinese airports (shown in bright green) to make the rankings. Shanghai Pudong increased its network by a further eight destinations to take it to 177 in all, second only to Beijing among Asian airports. Japan Airlines resumed service between Osaka Kansai and Los Angeles on 20 March 2015. The daily 787 service became the airport’s third US destination after Honolulu and San Francisco. The Japanese airport has seen its range of destinations served non-stop grow from 59 last November to 78 thanks primarily to an increase in connectivity to Chinese destinations.