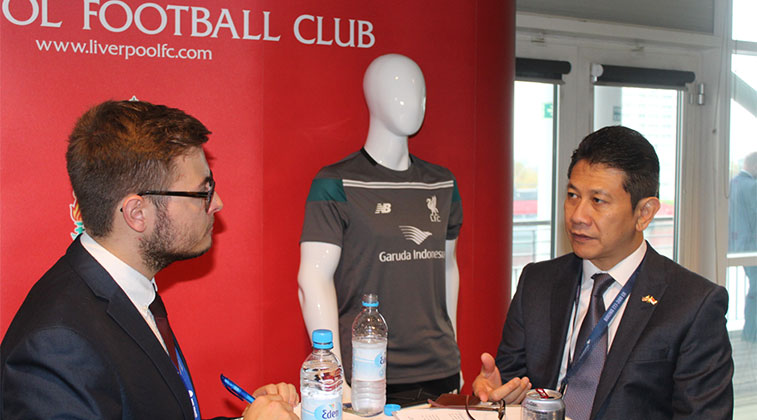 anna.aero’s second meeting of the day was with Jubi Prasetyo, Garuda Indonesia’s GM for the UK & Ireland. In his discussion with Jonathan Ford, Prasetyo highlighted that hopefully the airline will consider making its services to London Gatwick non-stop in 2016.”

At the 2015 World Travel Market exhibition in London, anna.aero’s Assistant Editor, Jonathan Ford, met up with Garuda Indonesia’s GM for the UK & Ireland, Jubi Prasetyo. The SkyTeam member has recently welcomed its ninth 777-300ER into its fleet which brandishes the SkyTeam livery. The carrier joined the Alliance in March of last year, before commencing its services to London Gatwick, a route which has now been operating for 13 months. By the end of 2015, the carrier will have a total of 187 aircraft. During their discussion, one of the key messages was how well the Gatwick route has been performing, with the hope of making it a non-stop service in 2016. Another topic was also how the carrier does not just offer a service to passengers, but an experience. Recently the airline picked up the Skytrax Award for having the world’s best cabin crew, the second year in a row it has won the title.

aa: “So services between Jakarta and London Gatwick have now been operating for over a year. How has this route been performing and are Garuda Indonesia happy with the results so far?”

Jubi Prasetyo: “Well firstly it has taken 12 years for us to be able to get this service back into the UK so this time we have returned with a completely different product that is not just a service but an experience on the new 777s that we have. The route has been performing as we have expected and we have seen strong loads between 75%-80% which is very promising to see within the first 12 months. What is of interest though is how well the route between London Gatwick and Amsterdam has been performing. We have seen that weekend breaks have been very popular and flights have shown to have a load factor of around 90% during that part of the week.”

aa: “So as this route is performing to a satisfactory level for Garuda, is there the possibility that we will see services operating non-stop between Gatwick and Jakarta in the near future?”

JP: “We hope so, the aim at the moment will hopefully be to have a non-stop service to London during 2016. The market for this option is currently being studied along with Amsterdam also being served without the add-on of Gatwick.”

aa: “Currently your service operates into London Gatwick, with this being the only UK route that the airline has. What are the main UK markets where passengers originate from for this route?”

JP: “A majority of our passengers are from the south-east. However, our UK catchment is anywhere from Birmingham and below. However, we do have a code-share agreement with KLM which allows our UK passengers to be able to connect onto the service at Amsterdam to then continue the journey onto Jakarta. We are also open to self-connections through GatwickConnect which allows passengers in the north of the UK and Ireland to self-connect onto the flight via Gatwick. However, we do stress that we do have a minimum connection time for passengers who take this option.”

aa: “So we have seen that a majority of passengers originate in the south-east. With this area of the UK in mind, why did the airline decide to choose London Gatwick over London Heathrow?”

JP: “So far we have a market in the South-East and around Gatwick so we are happy to have made this decision. Heathrow is a hard airport to get access to if you do not already have slots. Secondly, Gatwick provides just as good UK connections than Heathrow provides so from an operational point of view it just made sense to serve Gatwick.” 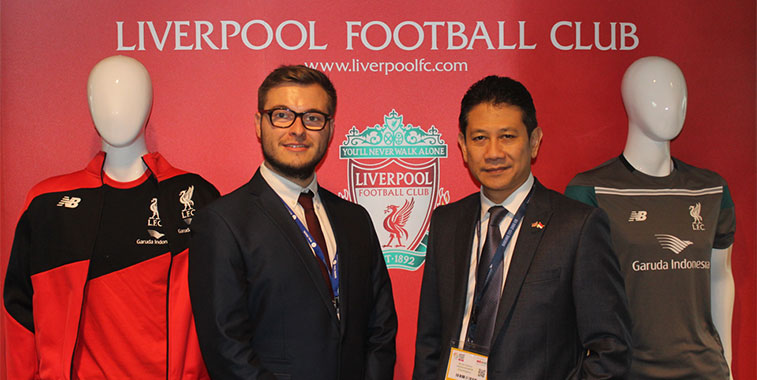 anna.aero’s Jonathan Ford, and Garuda Indonesia’s UK & Ireland GM, Jubi Prasetyo help to promote Liverpool Football Club which the airline is a key sponsor for. While also in discussion with Ford, Prasetyo highlighted that Garuda Indonesia does not just offer a service, but an experience to its passengers on its new 777 flights from Gatwick.