anna.aero meets with WOW air CEO, Skúli Mogensen, at World Travel Market to discuss why the carrier has decided to go long-haul 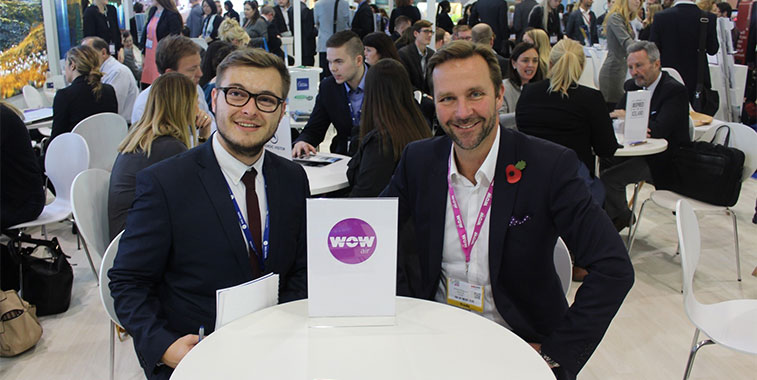 anna.aero’s Jonathan Ford, met with WOW air CEO, Skúli Mogensen, at World Travel Market this week. The day before both met, the LCC announced that it was to incorporate A330s into its fleet to be able to develop new links to Los Angeles and San Francisco. Mogensen confessed to Ford that although the airline’s growth was thriving, it would be a challenging time ahead for further growth as capacity in Iceland is limited currently.

During this year’s World Travel Market at London’s ExCeL Centre, anna.aero’s Assistant Editor, Jonathan Ford, met up with WOW air CEO, Skúli Mogensen. The biggest announcement recently for the Icelandic based LCC was that it has confirmed services to San Francisco and Los Angeles which will start in time for next year’s summer season. With that confirmation, the airline has also committed to three A330s. Although these aircraft have been purchased so that these routes can operate, the A330s will also be used on services to Boston and Baltimore/Washington, and also potentially on the airline’s new routes to Toronto and Montreal.

anna.aero: “Skúli, WOW air has this week announced that it is going to be starting flights to San Francisco and Los Angeles. What was the decision for the carrier to start flights to these airports? And why has the airline decided to incorporated wide-body aircraft into its fleet?”

Skúli Mogensen: “Yes that is correct we are going to be commencing services to Los Angeles and San Francisco from early summer time next year. The decision by WOW air to make this move strategically is because now is the right time to do so. Iceland is perfectly located to act as a transatlantic hub between Europe and the US which is evident due to our current services to Boston and Baltimore/Washington performing so well. They are achieving between 90%-92% load-factors, with numbers continuing to rise. We have hit on the right business model. Prices connecting to the US West Coast have been high, so now is the perfect chance to take action on this great opportunity. We will also be starting services to Toronto and Montreal next year.”

aa: “There you have mentioned that WOW air will be using Iceland as a hub in relation of connecting Europe and North America. So how much of WOW air traffic is directly to and from Iceland?”

SM: “How things are looking at the moment and going into next year, we expect that Iceland as an originating and arriving destination will be around 20% or less of our overall traffic.”

aa: “In respect of being a hub, you will also be operating alongside Iceland’s national carrier Icelandair, which also operates a hub system from Reykjavik/Keflavik Airport. What is the airline’s relationship with the airport?”

SM: “We have a great relationship with the airport. What the main issue is with Reykjavik/Keflavik is that it’s already close to being full. We are aware that the airport is introducing significant growth by developing  extra capacity but this is not due to be online until 2020 or 2021. So it’s going to be a challenging time to grow in Iceland in the near future at the rate at which we are growing now.”

aa: “With that in mind, could WOW air possibly be looking into opening hubs outside of Iceland?”

SM: “We will always be looking at adding additional hubs to our network. We are not married to Iceland. It’s why we are called WOW air and not WOW Iceland. We are constantly looking at the opportunities in being able to do this.”

aa: “When WOW air looks at airports to choose to fly to, what is it that you look for in that airport that makes you think this will be a good business opportunity?”

SM: “We are always looking at new opportunities for the business, such as the wide-body fleet, which we have had on the radar for about 12-18 months. So we incorporated the A321 last year to be able to look at route opportunities to airports such as Boston, which allowed us to test the transatlantic market. One benefit that we have is that we are still relatively small and can be optimistic about the airports which we would like to serve, and we are able to launch a market at relatively short-notice. What I believe though is that when looking at an airport we do not have to try and serve primary airports, as secondary airports over the past decade have themselves become primary hubs. Take Gatwick and Heathrow for example. The low-cost market has been able to grow Gatwick from being a secondary airport to a primary airport. I always think of Gatwick as being better than Heathrow, and now it shows that primary airports could adjust to the low-cost carrier model.”

aa: “Coming back to the wide-body fleet for a second – you tested the transatlantic market on the A321 and it was successful, so what was the deciding factor for you to pick the A330?”

SM: “We looked into various options when it came to deciding what wide-body aircraft we should use on long-haul operations. One of the main reasons for the A330 was because we are already operating an Airbus fleet. Therefore we are able to move crew across the fleet more easily as they are used to working with Airbus technology. With the A330 though, the main decision was to do with increasing the capacity and range. With that we can maximise loads, and with that increase the yield.”

aa: ”Finally we have seen that BA has started flights to Reykjavik/Keflavik with promoting the various onward connections available from Heathrow, particularly towards Asia. Now that you are adapting A330s into the fleet, could WOW air potentially develop links to this market which is not served at all direct from Iceland?”

SM: “We are always looking at the opportunities of new markets but at the moment are focus is on transatlantic operations. But anything is possible.” 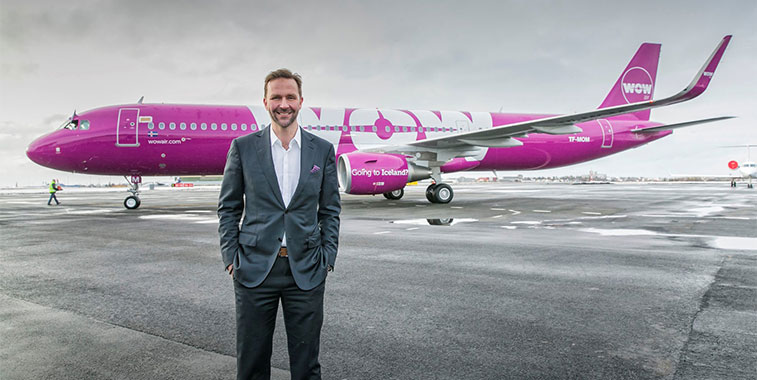 Skúli Mogensen is seen posing with one of WOW air’s A321s. Soon the airline will adopt a third aircraft type into its fleet when it will receive A330s next year to help start services to San Francisco and Los Angeles, as well as to help increase caapcity to Boston and Baltimore/Washington.