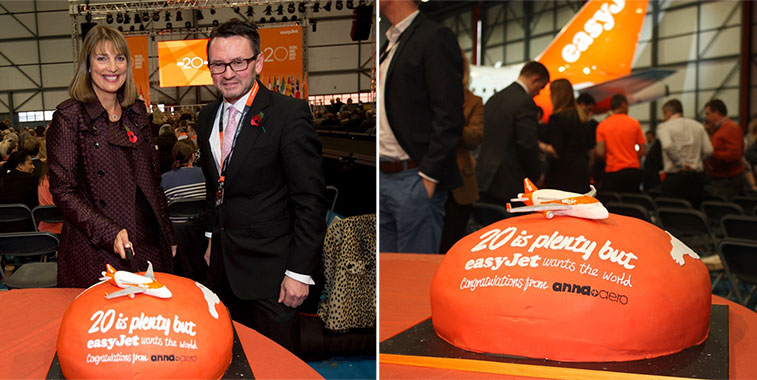 The cake with 20:20 vision: easyJet CEO Carolyn McCall cuts the 15kg cake presented by the anna.aero publisher, Paul Hogan (it was chocolate inside at McCall’s specific request). In terms of slices McCall would later tell the 600 birthday guests that, despite its pre-eminence, easyjet only had an 8% share of European markets: “We have a long way to go, growing 7-8% every year…”

10 November, Hangar 89, London Luton Airport: anna.aero was invited to easyJet’s HQ and birthplace for its 20th birthday party along with 600 other media and stakeholders, an event which marked an extension of the network from its first route (to Glasgow) in November 1995 to 788 routes today.

Besides a big retrospective of the last 20 years, including a rare and cordial appearance by founder, major shareholder and easyJet brand-owner Stelios Haji-Ioannou, the most important future-looking announcements were:

On course to 70m annual passengers

easyJet’s latest financial year results (ending 30 September 2015) are expected within the next week or so, but anna.aero’s data elves couldn’t be bothered to wait for that and have already come up with a passenger traffic forecast for the last 12 months: While the ever-posher LCC will get close to 70m annual passengers, anna.aero’s prediction is that it will fall just short of that milestone – at around 68.8m. 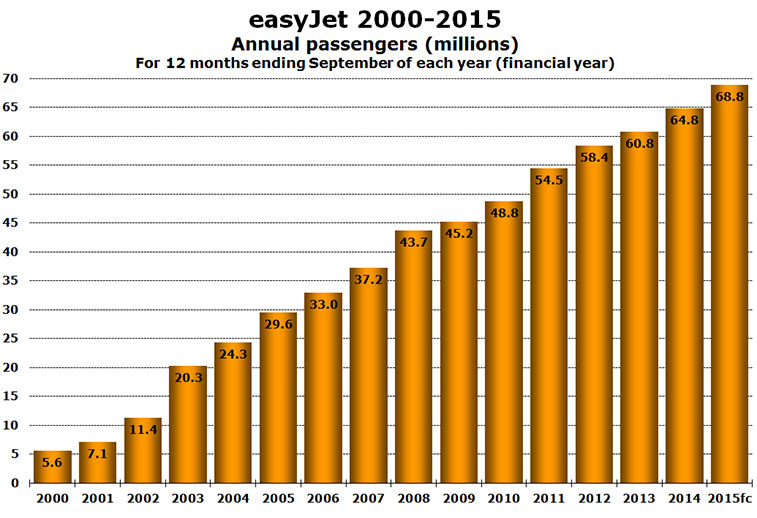 This figure is based on annual seat count of 75.4 million for the 12-month period from 1 October 2014 and a predicted year-long load factor of 91.3%. Whatever the actual result, one thing is clear, easyJet will deliver another new record performance year in terms of ‘bums on seats’. Inside the actual hangar bit of Hangar 89 the easyJet boss addresses the birthday party audience of 600 invited stakeholders and media, while more staff watch pressed against the windows. Behind McCall the stage was packed with representatives from all of easyJet’s 26 bases – some 30,000 employees and contractors now work for the 20-year-old easyJet with some 11,000 directly employed.

Barcelona and Venice base additions

easyJet currently has 26 bases spread across Europe, with just less than half of them in the UK. A further five bases are in France (Lyon, Nice, Paris CDG, Paris Orly and Toulouse), three in Italy (Milan Malpensa, Naples and Rome Fiumicino), and two each in Germany (Berlin Schönefeld and Hamburg), Portugal (Lisbon and Porto) and Switzerland (Basel and Geneva), with Amsterdam being the other. In 20 years easyJet has closed just three bases; those at East Midlands (which it inherited from Go), Dortmund, and Madrid, with Fiumicino scheduled to be downgraded from base status next year. (There was also the “mysterious” Doncaster Sheffield base which opened in 2010 and only lasted a year – our data elves are unsure as to whether the LCC ever considered it a base.) Base #27, Barcelona, and #28, Venice Marco Polo, were both announced in June 2015 and are due to open in February 2016 and April 2016 respectively, with the latter purported to be replacing the base in the Italian capital. 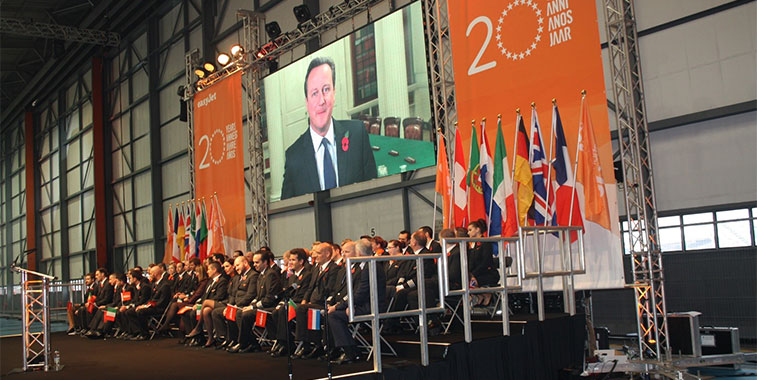 Analysis of the airline’s number of flights during the first week of August for the last 13 years, shows how the airline has continued its trend of becoming less UK-centric, with the share of departures from UK airports falling from almost 60% in 2003 to 33% in 2015 – the lowest share the UK has achieved in the period being analysed. Spain, which had been the airline’s second biggest country of operation for most of the last decade, fell behind both France and Italy in 2013, partly as a result of the closure of the Madrid base, but also reflecting the poor economic state of the Spanish economy. Despite weekly frequencies being added again in Spain since 2013, its marginal growth has come at a slower pace than that of Italy and France, and as such the gap has widened, with the former now a clear second with 14% of total weekly frequencies (France has 13%). 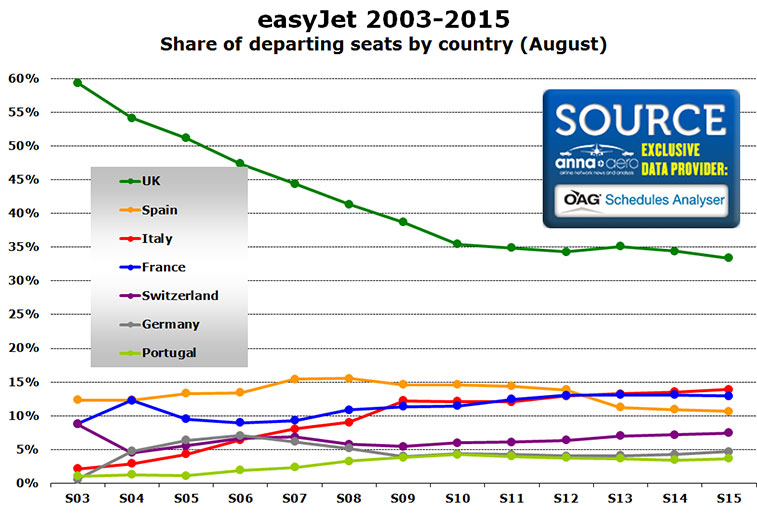 Germany, contributed to by the opening of the airline’s Hamburg base, is perhaps the star performing market over recent years, growing from 4.0% of weekly frequencies in S12 to 4.7% in August 2015. However, the German market still has a long way to go to get to its peak share of weekly frequencies of 7.1%, which was recorded in S06, when it was bigger than both Switzerland and Italy. With Amsterdam finally registered as a base, the Netherlands contributes the remaining 273 weekly frequencies or 2.6% of base activity.

In August this year easyJet was operating flights on just over 700 airport pairs (according to OAG Schedules Analyser data), up from over 650 the previous summer. The average weekly frequency on these routes is 7.3 (slightly more than daily), with London Gatwick to Amsterdam being the highest frequency route in summer, with 44 weekly departures, an average of over six flights per day. In addition, the airline serves a number of routes only during the winter period.

anna.aero’s data elves have been looking at their databases and we believe easyJet launched around 1,000 routes in its first 20 years. As with many other LCCs, not all the routes have been a long-term success and in some cases have been withdrawn after only a few weeks/months – although testing and experimentation – sometimes in instances where there is little more than a ‘hunch’ that a market can be stimulated, is a hallmark of the pioneering spirit of the low-cost airline model.

So, while easyJet, and airlines the world over, are sneered at, questioned and criticised by journalists who can’t even fiddle their own expenses correctly, such brave market-making is applauded and saluted from the anna.aero armchair. However, over the years we may have inadvertently poked fun at easyJet once or twice and at least one (fortunately former) CEO once threatened to sue us. Today we hereby unreservedly apologise for any past comment or gestures which may have caused offence and we promise that it won’t ever happen again – well, not for ages. What’s his secret? The easyJet founder and brand owner made a rare re-appearance at the 20th birthday party. Legend has it that easyPizza is laden with a special blend of peperoni and lashing of garlic which ensure that the easyJet brand owner will stay looking forever young.