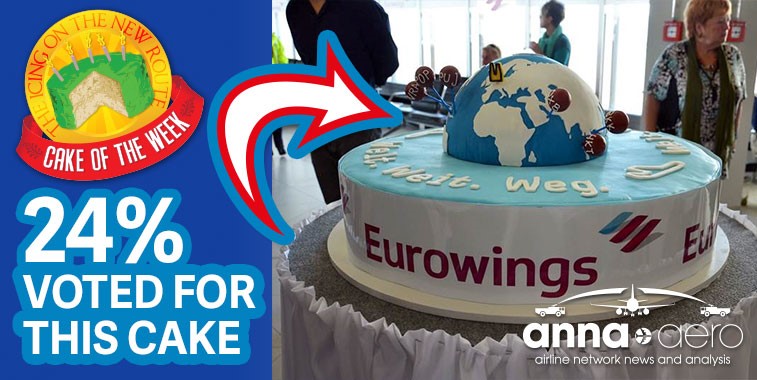 Nearly a quarter of every vote cast in Cake of Week W15/16 Part II was made in support of this monster of cake from Cologne Bonn Airport, created to celebrate the start of long-haul, low-cost flights from the airport by Eurowings. With over 1,800 votes it was 400 votes ahead of its nearest rival – Poland’s Warsaw Modlin Airport.

With around 10,000 votes carefully considered by airport and airline staff, interested members of the public and just the plain weird, the two weeks of public voting for the Cake of the Week W15/16 Part I and Part II has seen you the reader pontificate over more than 30 baked beauties. The sheer scale of the vote shows us that the network planning community – many of whom are in congress in Singapore this week at the 137th IATA Slot Conference – still loves cake!! Besides fabulous cakes, we were also sent numerous new route FTWAs – see our Fire Truck Water Arches Part II results here.

Nevertheless, here’s last week’s results, which saw Cologne Bonn Airport’s cake for Eurowings’ long-haul, low-cost route launch to Varadero (plus further destinations coming on-line through W15/16)  triumph. With nearly 400 more votes than its nearest rival – the Warsaw Modlin culinary centre piece baked for the arrival of Ryanair’s new Malaga service ‒ the German airport saw off the challenge from last week’s 12 other entrants. N.B. The airport names which are underlined are the bakers of the cakes in question.