Public vote winners Iasi Airport get their hoses out to celebrate last week’s Arch of Triumph win; Part II results and this week’s winner too 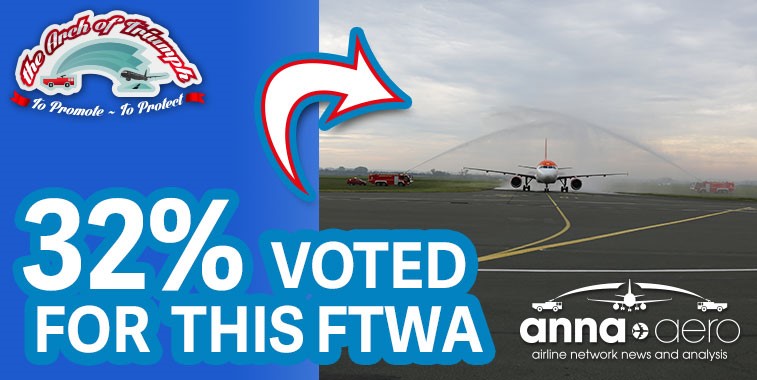 Marking with natural French style the beginning of easyJet’s new route from Lisbon, Lille Airport has picked up the second of the two public votes at the start of the W15/16 operational season. Second place went to Southwest Florida Airport, while third went to Dunedin Airport in New Zealand, highlighting the true global appeal of this weekly competition.

Following the start of the W15/16 season, we gave our readers, the power to vote for the best of the 28 fire truck water arches (FTWAs) that were sent to anna.aero over the first two weeks of the winter season from airports around the globe. Over the last seven days over 30% of voters have decided that Lille Airport provided a master class in FTWA delivery for new route celebrations in the second week of W15/16 – marking with French style the start of easyJet’s new route from Lisbon, launched on 27 October with thrice-weekly flights. Besides amazing FTWAs, we have also been sent numerous fantastic new route cakes – see our Cake of the Week Part II results. N.B. The airport names which are underlined are the creators of the FTWAs in question. 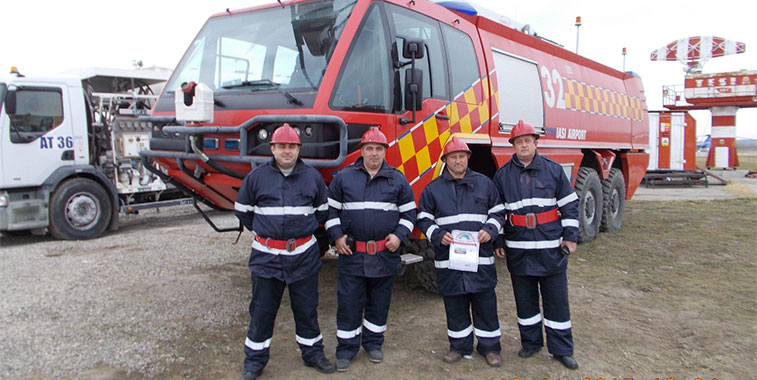 Last week, Iasi Airport in Romania won the FTWA public vote Part I, having amassed 40% of all the votes cast. The winning Arch of Triumph was created for the Blue Air launch to Paris Beauvais, beating itself into second place (this was for the TAROM launch to Munich). Celebrating the win (and the second place) were Iasi Airport firefighters: Daniel Zaharia, Ionel Caraiman, Vasilica Nita and Ioan Calinciuc.

Back to normal business this week, with the anna.aero judges back on duty (and with two sending their scores in from the 137th IATA Slot Conference in Singapore) and casting their eight eyes over the FTWAs sent in. With a score of 35.2, this week’s winner – Bologna Airport in Italy, with its FTWA for the launch of Emirates’ Dubai service – has failed to register on the leader board, so intense is the battle for the #1 spot as we race into the final few weeks of competition. An average score from all four judges of 8.9 or more is now needed to break into the Top 10 FTWA-providing airports in the world. With around six weeks to go, the title is still up for grabs, particularly as we have at least 350 more new routes to be launched between now and December 31st (according to anna.aero’s New Route Database). Keep Monitoring!! 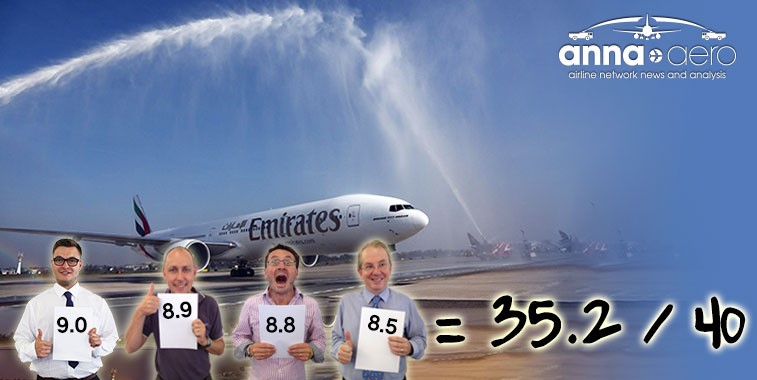 Bellissimo Bologna for this MEB3 beauty….

Judge’s Comments:  While this FTWA has done enough to secure the weekly title with a creditable score of 35.2, it has failed to make it onto the overall leader board, such is the standard of the Arch of Triumph 2015 competition, with just about six weeks to run. Still, securing your first MEB3 carrier will sweeten the pain in Bologna… 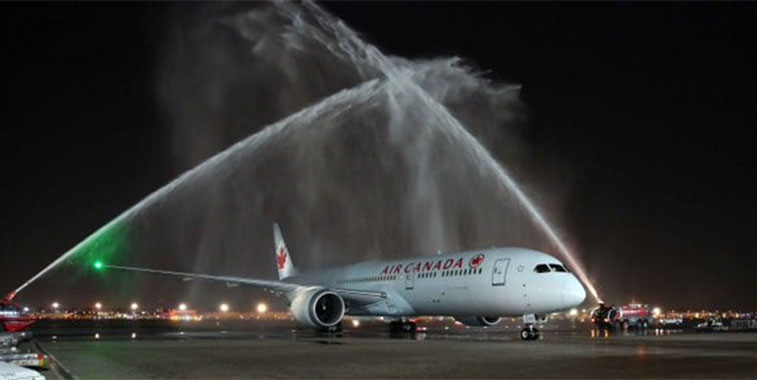 Watering the maple leaf in Dubai…

Judge’s Comments:  They water a lot of the vegetation in Dubai to keep it looking lush under the scorching temperatures…and it seems the Air Canada maple leaf is no exception. 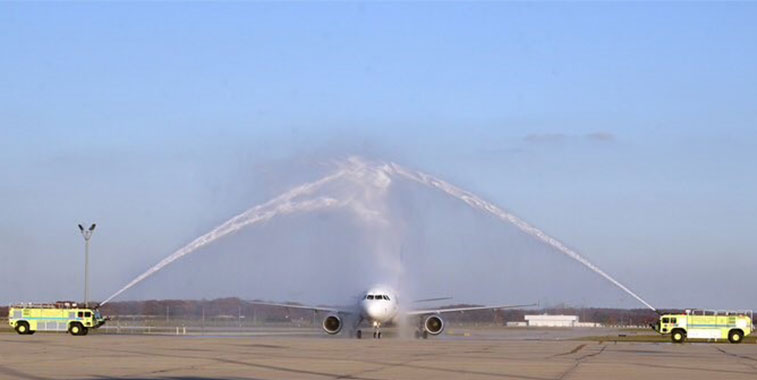 Judge’s Comments:  Coordinating details like…are we going to use two water jets or one…when thinking about your route launch FTWA is critical. Failure to do so just ends up making you look silly and unprepared…especially when if you had got it right, particularly with a double arch FTWA, it could have put you in contention for a weekly win or even the 2015 top 10… 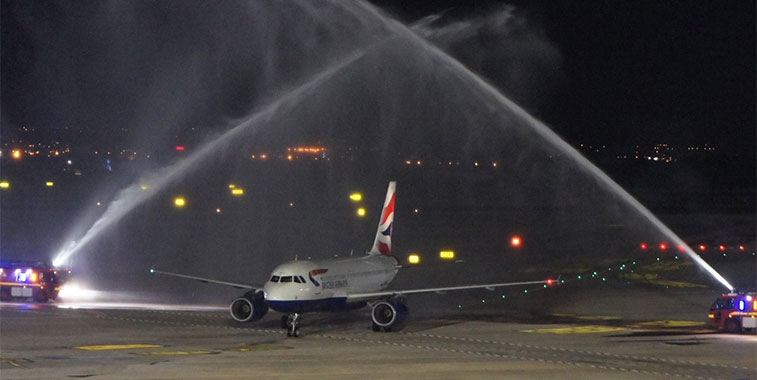 Judge’s Comments:  The lighting is perfect in this FTWA from Valencia to catch the full drama of attracting a big new airline. However, perhaps the firefighters in Spain thought that it was Alitalia and not British Airways starting flights – hence the Roman Cross FTWA? Or should that be Etihad Italy… 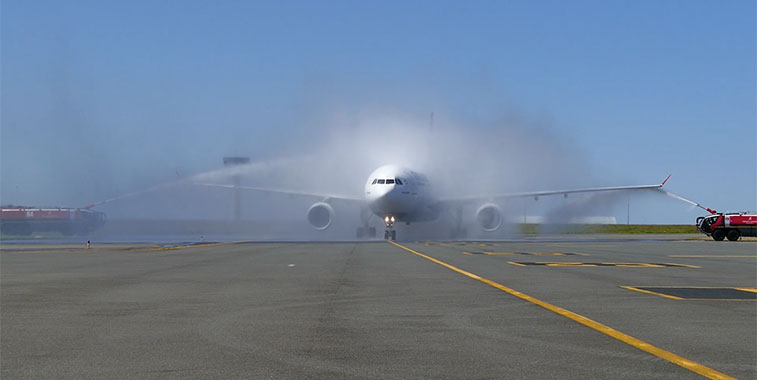 Judge’s Comments:  We have seen plenty of aircraft fuselages getting a good old wash on their inaugural flight, but what we have here in Durban is truly unique – the wing-wash FTWA. Perhaps the Turkish Airlines captain requested the full wash and wax so his aircraft looked nice in the pictures that were going to be taken once he got to the terminal.