On 5 November Memphis Airport continued its passenger traffic rebuild with the addition of double-daily New York LaGuardia services from American Airlines. Other carriers like Southwest Airlines and Allegiant Air are helping to fill the capacity void left by Delta Air Lines at the Tennessee airport.

As an airport being de-hubbed is not a pleasant experience. It’s kind of like being ditched by your first serious girlfriend as a teenager – you think the world has ended. However, these decisions, hard as they are, are a natural consequence of airline consolidation, practiced particularly in the US. Here, the large network carriers or the ‘US Big Three’ (USB3) – namely American Airlines, Delta Air Lines and United Air Lines ‒ have had to take the capacity hatchet to the oversupply of hubs which existed when the likes of Continental Airlines, Northwest Airlines, and most recently US Airways, were once on this now shortened list of true hub and spoke US carriers.

Of course, with the end of any relationship hopefully comes the beauty parade of new potential lovers – courting with the likes of Allegiant Air, Frontier Airlines and Spirit Airlines – all of which are offering something exciting, fresh and different – point-to-point rather than transfer traffic. This is seemingly the case at airports like Memphis (de-hubbed by Delta in September 2013), Cleveland (de-hubbed by United in February 2014) and Cincinnati (still technically a Delta hub, but staring down from the de-hubbing precipice), who seem to be on the network rebuild again after years of frequency and capacity decline.

Capacity climb out for Cleveland

With an annual traffic in 2014 of 7.61 million passengers, Cleveland is the biggest of the three airports being analysed. This traffic figure is significantly down on the 9.72 million which passed through its doors in 2009 – the year before our first capacity snap-shot below. However, in years not too long ago (1999 to be exact), the airport was handling a yearly throughput of around 13 million. The airport’s biggest routes (Sep 2014 – Aug 2015), according the Bureau of Transportation Statistics (BTS), were Chicago O’Hare (411k – served by American and United), Atlanta (306k – Delta, Frontier and Spirit) and Chicago Midway (Southwest Airlines). While United (formerly as Continental Airlines of course) is still the main player in Cleveland, it is now only twice as big as the #2 airline at the airport (American), rather than the six or seven times larger it was in 2010. While Southwest has stayed largely static, Spirit and Frontier have both greatly improved their respective standings. It should be noted that for the purposes of this analysis that capacity from Continental (United) and US Airways (American) have been merged into the larger entity in both years for all three airports.

After years of decline, it seems that last November (2014) represented the low-point in terms of weekly frequencies (931) and weekly seats (92,033) for Cleveland, with this month’s weekly figures showing a perceptible increase (964 frequencies; 97,314 seats). However, this year’s numbers represent only 57% and 84% of the weekly frequency and capacity figures which were achieved in November 2010 at the Ohioan airport. On 30 April, Cleveland Airport welcomed JetBlue Airways – including an impressive cake and a ribbon cutting ‒ and the arrival of new services from Boston and Fort Lauderdale. Next month, Delta Air Lines will be adding a weekly service from Orlando.

Memphis on the mend

Memphis is now the smallest of the three airports being evaluated, with an annual traffic in 2014 of 3.6 million passengers. This figure is significantly down on the 10.23 million passengers which used the airport in 2009 – the year before our first capacity snap-shot below. However, in other recent years (2000 to be precise), the Tennessee airport was processing around 12 million passengers per annum. The airport’s biggest routes (Sep 2014 – Aug 2015), again according to the BTS, were Atlanta (403k – Delta), Dallas/Fort Worth (191k – American) and Charlotte Douglas (175k ‒ American). Delta maintains its status as the #1 capacity provider in Memphis this November, however American is pushing it hard in second spot, especially after the recent launch of services from New York LaGuardia. Southwest is now a serious capacity provider in the largest city in Tennessee, prowling in third place behind the oneworld carrier in terms of weekly seats. Allegiant, which had no services to Memphis in 2010, is now the fifth largest carrier at the airport in terms of weekly capacity.

Similar to Cleveland, it seems that last November (2014) represented the bottoming out in terms of weekly seats (45,780) for Memphis, with this month’s figures showing marginal growth (up to 47,459). That said, the airport’s airlines must be using larger aircraft on fewer flights than they did 12 months ago, as weekly frequencies are down year-on-year (526 vs 578). However, this year’s numbers represent only 30% and 39% of the weekly frequency and capacity figures which were achieved in November 2010 at Memphis.

Although still listed by the airline on its website as a hub, Cincinnati has seen its capacity trimmed by #1 tennant Delta year after year (the airport is the SkyTeam airline’s eighth largest hub). The Ohioan airport was originally the biggest of the three airports being assessed, with an annual traffic in 2005 in excess of 23 million passengers. Less than 10 years later, this figure has now dropped to the 5.91 million result which was recorded in 2014. Over half of this throughput had been lost by 2009 (10.62 million) – the year before our first capacity snap-shot below. The airport’s biggest routes (Sep 2014 – Aug 2015), again according to the BTS, were Atlanta (313k – Delta and Frontier), Chicago O’Hare (255k – American, Delta and United) and Charlotte Douglas (162k – American and Delta). Unlike the other two airports, at Cincinnati the weekly capacity low-point was in November 2012 (72,265 seats), although the gains up until November 2014 (77,173 seats) seem to have plateaued in November 2015 (76,874 seats). Indeed, the number of weekly frequencies is at the lowest point this year (948) versus figures from any other time over the last five Novembers. However, this year’s numbers represent the highest share of those recorded in 2010 of the three analysed airports, with November 2015 delivering 72% and 83% of the weekly frequency and capacity figures which were achieved in November 2010 at Cincinnati.

Of the three airport’s being analysed, it is at Cincinnati where the dominant airline in 2010 has re-trenched the least when consulting this year’s numbers, with Delta still commanding over 50% of weekly seats and frequency – probably why the airline still chooses to call the airport a hub. That said, newcomers Frontier and Allegiant have both made significant in-roads at the airport, with Cincinnati for the latter now being its biggest non-destination market in terms of weekly seats (after Las Vegas, Orlando Sanford, St.Pete-Clearwater, Phoenix-Mesa, Punta Gorda and Fort Lauderdale). For these three airports at least, it just goes to show that there are plenty more fish in the sea. 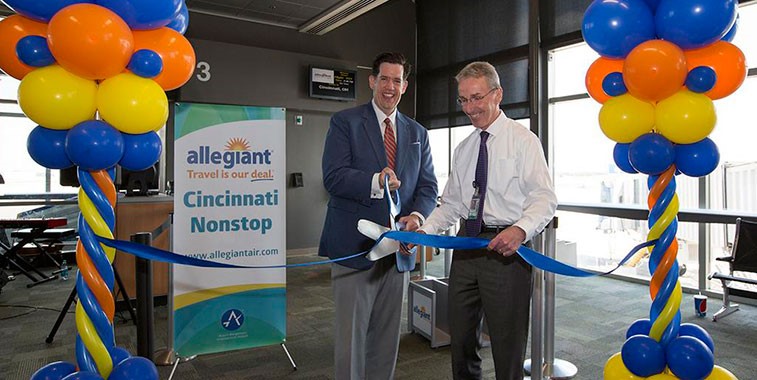 On 4 June, Allegiant Air launched twice-weekly services from Cincinnati to Austin-Bergstrom – a seasonal service that will be restarting on 18 February and will become a year-round route. That said the airline still operates to eight US destinations in November from the Ohioan airport and is now the fourth largest carrier in terms of weekly seats.