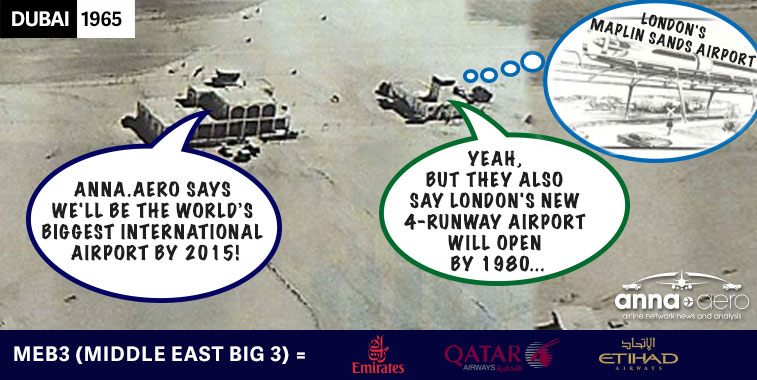 Even in their wildest dreams did anybody really ever really think that world hub domination would emerge from the backwaters of Dubai, Istanbul or Shanghai? It just goes to show that, whatever the analysts think, nobody really has a clue what’s around the corner in 2035…maybe a south Atlantic global mega-hub at the new Saint Helena Airport (HLE)?

Apparently under pressure from the French and German transport ministers, the European Commission is considering whether or not to use the next round of commercial aviation agreements with Qatar and the UAE to tackle the alleged subsidies to the global carriers in those countries, namely Emirates, Etihad Airways and Qatar Airways. Emirates has already responded by writing to several governments with its views. Needless to say, as in the US, the matter is likely to rumble on for some time.

Fourfold increase in capacity in 10 years

This week anna.aero looks in more detail at the development over the last decade of operations by the MEB3 carriers (Emirates, Etihad and Qatar Airways) into Europe, from their bases in Dubai, Abu Dhabi and Doha. All three carriers have seen the number of annual flights to Europe grow every year without fail, even during those years of economic recession in Europe. Between 2005 and 2015 both Emirates and Qatar Airways have increased their annual flights by just over 14,000, while Etihad has increased its flights by almost 9,000. The smallest of the three carriers, Etihad in 2015 operated around the same number of flights to Europe as Emirates did in 2006. 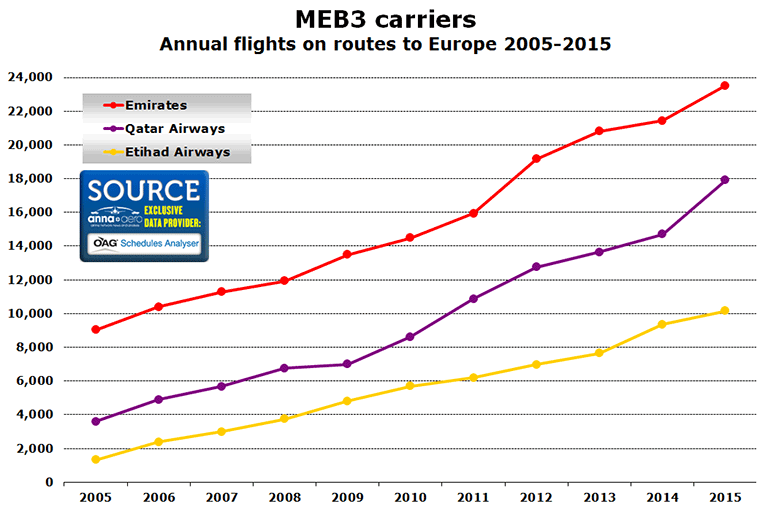 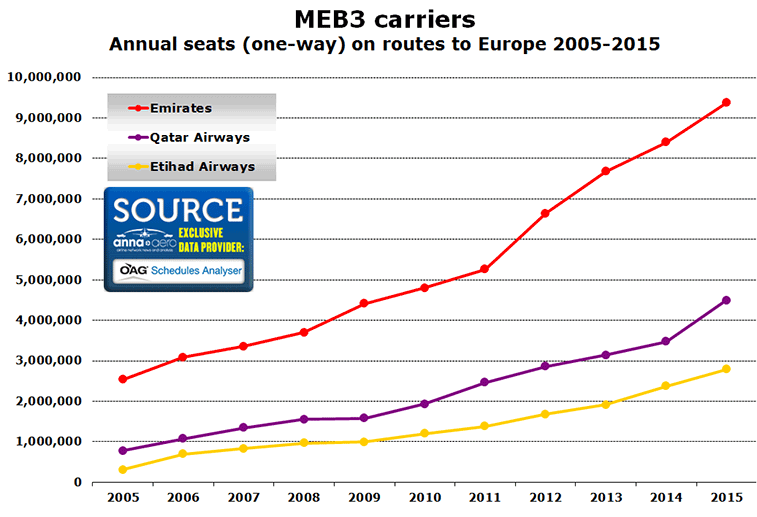 A closer look at which European country markets are best served by the MEB3 carriers reveals that, unsurprisingly, the UK leads the way, with 88% more seats offered in 2015 than the next biggest market, Germany. Since 2005, the UK has seen an increase of over 2.6 million annual one-way seats. The German market, with an additional 1.7 million seats, has seen more growth than Italy (1.5 million more seats) and France (1.2 million more seats) during the last decade. 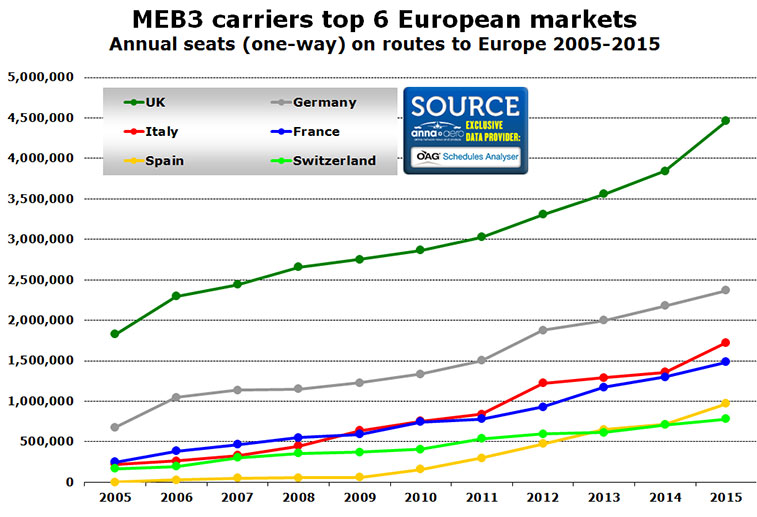 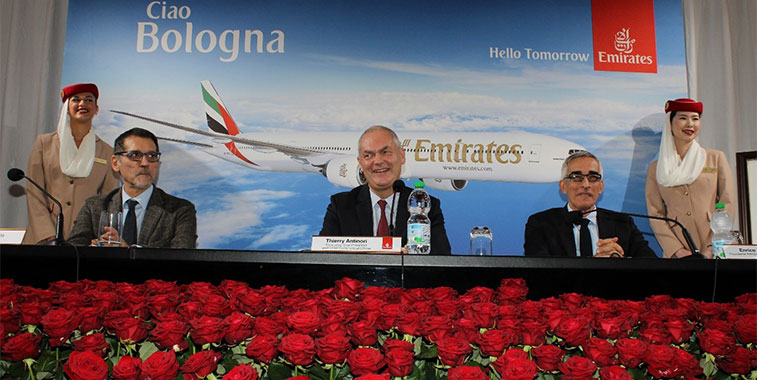 On 3 November Bologna in Italy became the 47th European airport to be served by at least one of the MEB3 carriers, in this case, Emirates. Celebrating the launch in front of a packed audience were: Mr. Virginio Merola, Mayor of Bologna; Mr. Thierry Antinori, VP and CCO, Emirates; and Mr. Enrico Postacchini, President, Bologna Airport. Bologna became the fourth Italian airport to be served by the MEB3 carriers. Only Germany (with five airports) and the UK (seven airports) have more cities connected to MEB3 hubs.

Using OAG Schedules Analyser data for week commencing 17 November 2015 shows that the MEB3 carriers now operate to 48 airports in Europe spread across 28 countries. Of the 48 airports, 16 are served by all three carriers while a further 11 are served by two of them. In eight countries more than one airport is served, with the UK leading the way thanks to services from a total of seven airports, two more than are served in Germany. Italy recently went from three airports to four with the launch of Emirates flights to Bologna. While many EU member states are served by the MEB3 carriers, some are not. At present there are no flights by these carriers to Estonia, Finland, Latvia, Lithuania, Luxembourg, Slovakia or Slovenia.

Birmingham and London Gatwick are the only airports served by just one of the carriers, with as many as three daily flights. This will soon change as Qatar Airways has announced plans to serve Birmingham from the end of March 2016. In addition, Emirates will join Qatar Airways in serving Istanbul’s second airport at Sabiha Gökçen from mid-December.

While Dubai in particular has become a destination in its own right, it should be remembered that the majority of passengers on these airlines are using Abu Dhabi, Doha and Dubai as hubs to get from where they are to where they want to be. European cities clearly generate a lot of outbound traffic to destinations across Africa, Asia and the Middle East, as well being destinations for passengers originating in those parts of the globe.