Turkish Airlines to fly in airport CEOs from all its 46 African destinations to ACI Airport Exchange Istanbul! 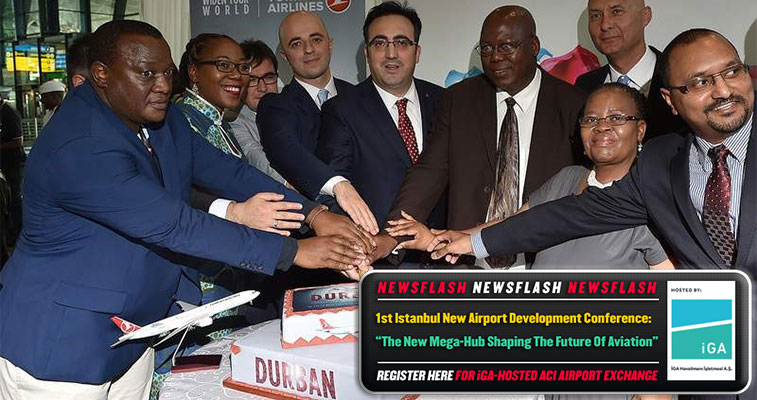 Reflecting Turkish Airlines’ intensive interest in Africa, where it has most recently opened its 46th destination (to Durban), the Star Alliance airline has agreed to provide free tickets to all airport CEOs across its African network so they can attend ACI Airport Exchange in Istanbul 8-10 December to learn about its brand new mega-hub, and get Turkish business more involved in African airport development.

This year ACI Airport Exchange is being hosted by İGA Havalimanı İşletmesi A.Ş., the company building Istanbul New Airport, the new €10.2 billion mega-hub which will be dominated by Turkish Airlines when it opens in 2018. Therefore the event is very much shaping-up to be a showcase of Turkish airports expertise, especially as the programme includes “The 1st Istanbul New Airport Development Conference” – one of seven specialist conferences around an exhibition of over 120 companies, many of whom are suppliers to the new airport.

Turkish Airlines’ motivation to bring its African airport partners to Istanbul builds upon Turkish government policy which views Africa as a priority interest as it estimates the continent will become a $30 trillion economy by 2050. Turkish Airlines’ expansion (it has just-announced Madagascar and Mauritius as destinations 46 and 47), and Turkish exporting businesses, are closely harnessed to this official policy, especially Turkey’s thriving airports sector which is keen to play a central role in the redevelopment of African airports.

Indeed Serdar Yildirim, the new Director General of DHMI, the state airports organisation and sovereign landlord of all 55 Turkish airports (including all those in Istanbul), says DHMI wants a leading role in building and operating new African airports in partnership with skilled Turkish construction firms and airport operators. DHMI’s plan is to export the Public-Private-Partnership model which has transformed the Turkish airports landscape, including the Istanbul New Airport. 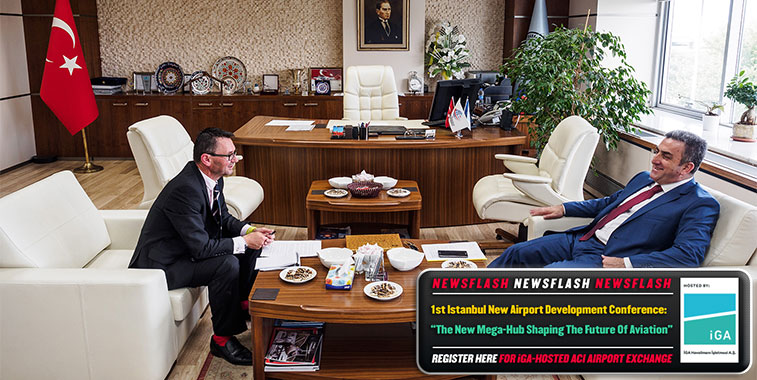 Serdar Yildirim (right) the new Director General of DHMI, the Turkish state airports organisation: “The Istanbul New Airport-hosted ACI Airport Exchange will serve as a platform and shop window for Turkey’s substantial airports capability.” (Yildirim was commenting days after Limak, a leading partner in the new airport, won the $4 billion tender for a new terminal at Kuwait International Airport.)

Turkish airport PPP is also a ready-made model that Dr Temel Kotil, the Turkish Airlines CEO, enthuses about: “We have practiced building airports and now we can build them everywhere – today TAV (operator of Istanbul Ataturk and many other Turkish and foreign airports) and Limak (a central partner in Istanbul New Airport) are global players.”

And there are already real examples in Africa of how the Turkish PPP model is bearing fruit, including the new terminal for Mogadishu’s Aden Adde International Airport which was inaugurated by Turkey’s President Erdoğan in February. The build-operate facility is managed by Favoli Airport LLC – a partnership between Turkey’s Kozuva Construction and Cetin Group – it has a concession to operate the air terminal for 20 years.

There are real examples in Africa of how the Turkish PPP model is bearing fruit, including the new terminal for Mogadishu’s Aden Adde International Airport which was inaugurated by Turkey’s President Erdoğan in February.

“We’re already operating twice daily to Mogadishu which has some 40 flights per day from a combination of all airlines – there should be 100 flights soon – it’s really becoming accessible,” says Turkish Airlines’ Kotil who thinks there are many more African cities which could be receiving Turkish Airlines’ services, often starting with 2-3 weekly frequencies.

“Anybody serving Africa has a good profit – yields are two or three times higher than in Europe on every single flight, sometimes traffic may be tiny, but the profit is high. As the market grows this will change, yield is going to halve, but in 20 years Africa is going to be like heaven.”

DHMI’s Yildirim is similarly enthusiastic: “It’s time we took our potential outside of the borders of Turkey…our first target is Africa, there are huge opportunities there…our scope is on Africa, and African attitudes to the presence of DHMI, and its Turkish partners, are very good.”

Kotil agrees that the advent of Istanbul New Airport will also encourage traffic by other competitive airlines at the mega-hub, but he says this will also further increase Turkish Airlines’ African dominance: “My message to other airlines, whether code sharers or Star Alliance is: Fly to Turkey more! We need feed – we are going to get it from ourselves – but we also welcome other airlines – for every 100 passengers they bring I will get 50 customers from these lovely ‘other’ airlines who will fly on to Africa.” 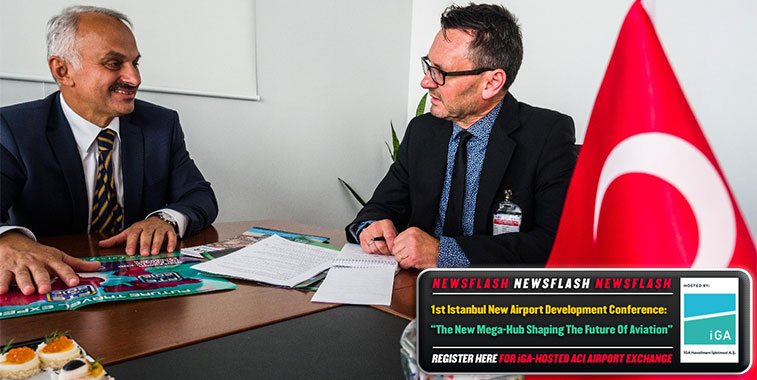 Turkish Airlines’ CEO Dr Temel Kotil tells anna.aero why Africa is so important: “Yields are two or three times higher than in Europe on every single flight, sometimes traffic may be tiny, but the profit is high. As the market grows this will change, yield is going to halve, but in 20 years Africa is going to be like heaven.”