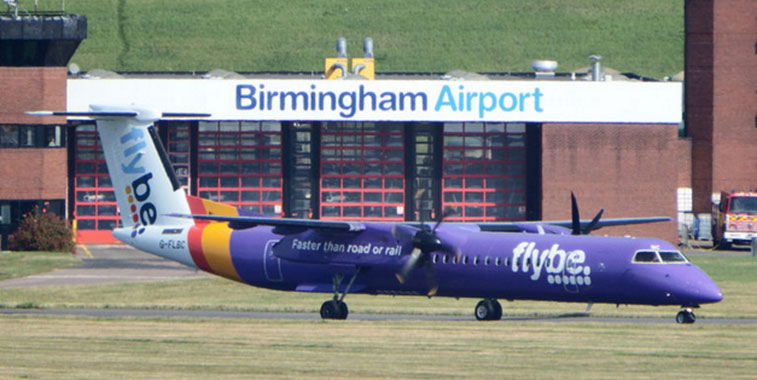 Birmingham is Flybe’s biggest base. According to OAG Schedules Analyser data, Birmingham will remain Flybe’s biggest base during the course of W15/16, despite a 2.1% decline in seat capacity. One factor leading to this result is due to the airline no longer operating services to Cologne Bonn, Reykjavik/Keflavik, Hamburg, Oslo Gardermoen, Toulouse, Bordeaux, Florence and Porto from the facility this winter like it did in W14/15. From March however, the carrier will reinstate services from the UK’s second city to Knock in Ireland, while a service to Rotterdam will commence next September.

For the six month period up to 30 September 2015, Flybe recorded an adjusted pre-tax profit of £21.1m, which is impressive when compared to the loss of £1m it made during the same period in the year before. Flybe currently has a total of 72 aircraft in its fleet, made up of 20 Embraer jets, 50 Q400s and two ATR 72-600s which are operated by SAS on Scandinavian regional services. Route development at Flybe has been intense over the past few years as the regional carrier has tried to become profitable. Within the past 18 months, the now teenager airline (Flybe turned 13 this year under its current brand) has opened bases at Aberdeen, Bournemouth (closing in March 2016), Cardiff, London City and London Southend if Stobart Air-operated services are also included into the mix. 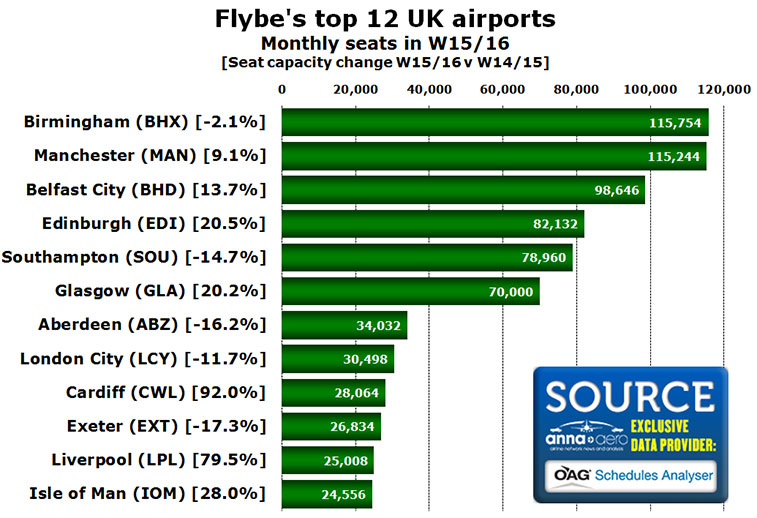 Despite recording a 2.1% decline in seat capacity when compared to the same period of last year, Birmingham remains Flybe’s number one airport in relation to available seat capacity. The UK’s second largest city currently holds a 0.4% margin over the airline’s second largest base at Manchester, which has coincidentally reported a growth in seat capacity of 9.1%. What is interesting to note however is that as a result of Flybe opening a base at Bournemouth, the carrier’s Southampton base, which was once the airline’s largest hub, has seen a capacity decline of nearly 15%, allowing bases at Edinburgh and Belfast City to overtake the south coast base to become Flybe’s third and fourth largest bases respectively. Elsewhere in the top 12, one of Flybe’s newest bases, London City, is recording a decline in seat capacity going into the start of the winter season of nearly 12%, while Cardiff in ninth position is showing a growth of 92%, a direct result of the carrier basing two E190s at the Welsh facility during the summer. 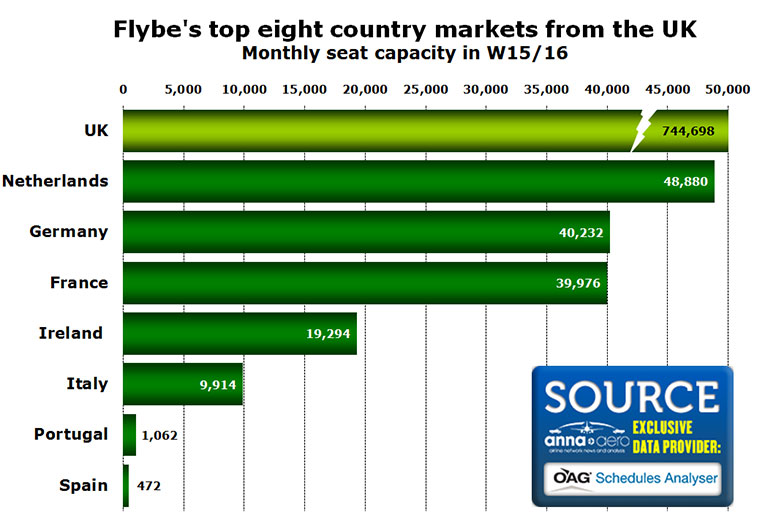 After recording a growth in capacity of 35% when compared to the same period last year, the Netherlands has become the fastest growing country market from the UK, helped by services to Amsterdam from Liverpool and Bournemouth launching during the summer. Nonetheless, it is the UK domestic market (highlighted in light green) which is the most dominant for Flybe, making up 82% of overall seat capacity for the regional carrier this winter, and has recorded a growth of 8.0% when compared to last year. According to OAG Schedules Analyser data, the country markets of Belgium, Norway and Iceland are no longer served from the UK by Flybe.

On 18 May, Flybe opened a base at Bournemouth Airport with two 78-seat Q400s. The regional carrier commenced a total of nine routes from the base to Amsterdam, Dublin, Glasgow, Jersey, Manchester and Paris CDG as well as seasonal routes to Biarritz, Deauville and Toulon Hyères. On the announcement of the new base back in November of last year, Paul Simmons, Flybe’s CCO, said: “We are pleased to be opening based operations at Bournemouth Airport. Bolstering regional connectivity remains our number one aim. Serving the Dorset coastline builds on Flybe’s strong regional presence.” However, what was controversial about the base was that it was opening just 39 kilometres away from one of the carrier’s largest hubs, Southampton. But just six months after based operations commenced, Flybe announced that it was to close its Bournemouth venture, with Simmons commenting: “We have decided to consolidate the business network that was in place at Bournemouth into our Southampton base. This will enable more frequency and more choice to our customers through consolidating our south coast operation into one airport.” To understand a reason for this consolidation, anna.aero has taken a closer look at the performance of Flybe’s Bournemouth routes since they began. 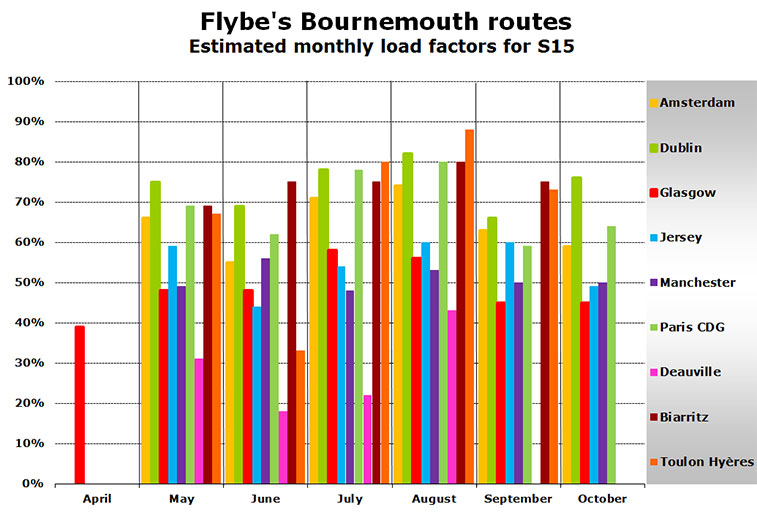 By conducting a cross comparison of the Civil Aviation Authority’s (CAA) passenger statistics for Bournemouth with a capacity analysis provided by OAG Schedules Analyser data, anna.aero has been able to calculate the estimated load factors of Flybe’s Bournemouth routes. This analysis has not taken into account however if any flights were cancelled during the time period. One route which stands out as a poor performer is the connection to Deauville. Over the four-month period in which it operated (service ended in August), the link to the northern French facility averaged a load factor of 29%. In relation to passenger figures, the link has in total carried 2,597 people, while a total of 9,204 seats were on offer during S15 between the two airports.

On the announcement of the base opening, Paul Knight, MD at Bournemouth Airport announced that the new base would add an additional ‘300,000 passengers’, yet from CAA data, just under 110,000 people have actually passed through the facility on Flybe services since they commenced up until 31 October. The final services from the airport will end on 27 March, with Glasgow and Jersey ending in January. What can be seen from the cross compared data is that not all of the routes from Bournemouth performed badly. Biarritz achieved an average load factor of 75%, the best of all routes served from Bournemouth by the carrier, however this may be due to the fact that the route was only served weekly, while the remaining eight routes witnessed more frequencies. As for the other routes, Amsterdam achieved an average load factor of 65%, Dublin (74%), Glasgow (48%), Jersey (54%), Manchester (51%), Paris CDG (69%) and finally Toulon Hyères achieved an average load factor of 68%. However we at anna.aero know that it takes more than just healthy load factors to contribute to a route’s profitability.

Doncaster Sheffield base to open in March 2016 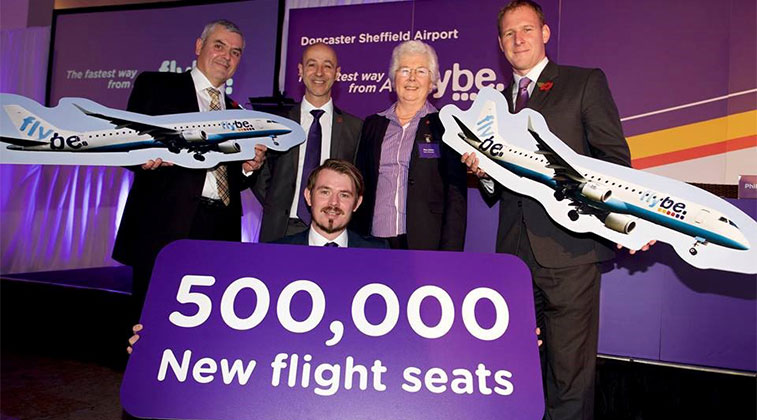 Doncaster Sheffield’s magnificent eight. Flybe recently announced that from March 2016, it would open its newest base at the Yorkshire facility, with two E195s being stationed at the airport. The two aircraft will operate services to Paris CDG, Amsterdam, Berlin Tegel, Jersey, Newquay, Malaga, Alicante and Faro.

On 10 November, Flybe confirmed its eight new routes which it will be starting from Doncaster Sheffield Airport from March 2016. Steve Gill, MD at Doncaster Sheffield, commented on the news by saying: “This is fantastic news for the Sheffield City Region. We have worked extremely closely with the Flybe team to ensure that the route network meets the needs of the region.” A breakdown of Flybe’s Doncaster Sheffield schedule can be seen in the table below.

Although none of the new routes from Doncaster Sheffield will face direct competition from any other scheduled carriers, Thomson Airways does offer flights to Alicante, Faro and Malaga from the airport. Apart from Berlin Tegel and Newquay, the remaining six routes will face strong indirect competition from fellow Yorkshire airport Leeds Bradford, which is a base for Ryanair and Jet2.com, with both operating multiple weekly frequencies to the destinations mentioned. It’s also worth noting that Flybe is not operating services to Belfast City from Doncaster Sheffield, however the Northern Ireland airport is served by the airline from Leeds Bradford. Recently the airline ended its ‘Shuttle’ service which operated from Leeds Bradford on a Jersey-Southampton-Leeds Bradford-Aberdeen rotation.

Despite announcing eight routes from Doncaster Sheffield next summer, it’s not just the Yorkshire base that will see new services. Norwich will see flights to Alicante and Malaga resume on 28 and 29 March respectively, while Birmingham sees services to Knock and Rotterdam being launched. Manchester will welcome Rotterdam as well, while Edinburgh will also see services to Knock be launched. Finally Cardiff will see a seasonal service to Verona launch on 23 April. 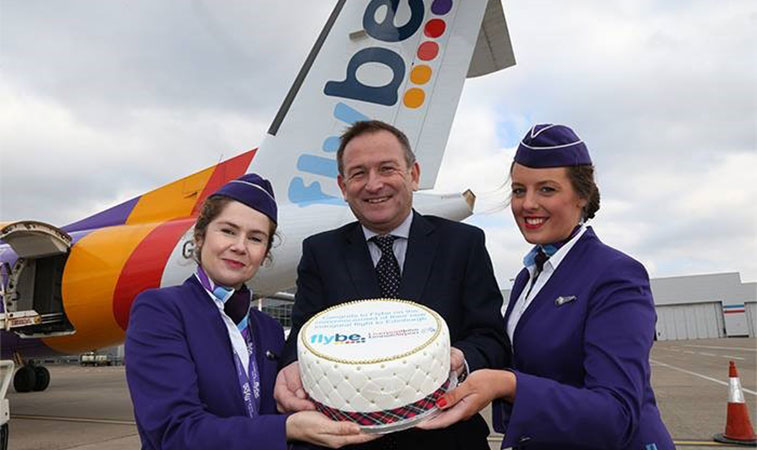