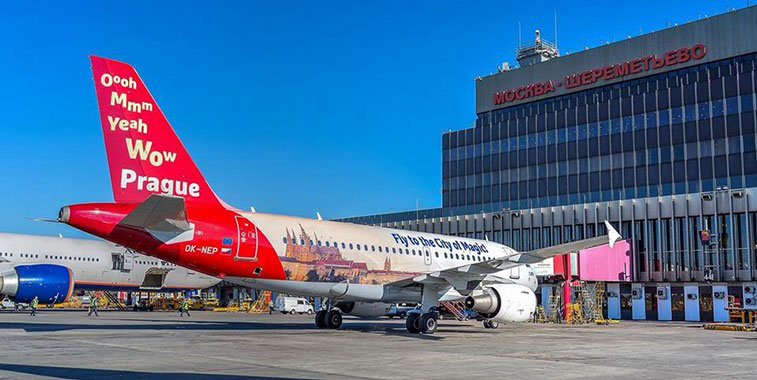 On 20 August, Moscow Sheremetyevo Airport celebrated the 55-year anniversary of Czech Airlines services from Prague. Czech Airlines was among the first airlines to begin operations from the then recently opened Sheremetyevo Airport. In the last 12 months the SkyTeam carrier has grown by 20% at the Russian hub, helping propel the airport to the #1 spot in Russia in terms of passenger traffic.

Moscow’s airport hierarchy, and indeed Russia’s, is about to change, with Moscow Sheremetyevo poised to steal the #1 spot in both metrics for the first time since 2005. Although in 2014 Moscow Domodedovo was clearly the largest of the two Russian airports, handling just over 33m annual passengers, this year it is almost too close to call as to who will end up as the country’s busiest airport, although at this point in time, Sheremetyevo, home of national carrier Aeroflot, is in the lead. 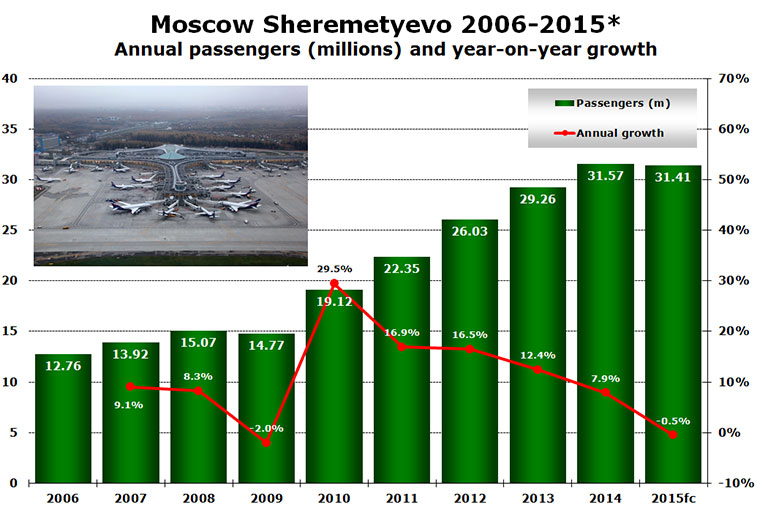 At the end of October, the difference between the two airports was around 240,000 passengers, with two months of figures left to add to 2015 annual statistics. While Domodedovo has witnessed average monthly declines of 7.4% during the year so far, Sheremetyevo’s performance has been better, with traffic down on average 0.5% across the first ten months of 2015. Clearly Domodedovo’s figures have been adversely affected by the demise of Transaero Airlines, which was the second largest carrier at the airport when it suspended operations at the end of October. Based on the traffic trends witnessed so far this year, anna.aero forecasts that Sheremetyevo will deliver an annual passenger figure just below the result it achieved in 2014. However, if November and December’s throughputs match those attained in October – which was up 4.8% year-on-year – the capital city hub may just beat last year’s result.

Entering Sheremetyevo’s monthly passenger data for 2014 into anna.aero’s Seasonal Variation in Demand (SVID) calculator, the airport performs well, generating a score of 3.90 ‒ a ‘Good’ rating. The airport ranks 46th out of the 72 airports analysed so far in 2015, lying between Brussels Charleroi (3.54) and Bucharest (4.05). The airport’s seasonality performance has improved marginally when compared to the result achieved in 2013, when it attained a score of 3.91 ‒ which was still a ‘Good’ score.

In order to gain a thorough understanding of Sheremetyevo’s seasonality, anna.aero’s data elves also ran a comparison with Moscow’s two other main airports, Domodedovo (7.27 ‒ Good) and Moscow Vnukovo (6.00 – Good). From this, we can see that Moscow’s other two airports have a more pronounced seasonality, which may partly explain why Sheremetyevo’s demand has remained more robust over the past 12 months. For all three airports, the quietest month of the year is February, with August being the busiest month for Sheremetyevo and Domodedovo (July at Vnukovo).

Sheremetyevo is Aeroflot’s main base and therefore it comes as no surprise which airline is #1 at the airport – the carrier commands 90.5% of all weekly seats (up marginally from 89.8%) at the airport this November. Part of this increase can be explained by the fact that the SkyTeam carrier (non-Skyteam Alliance carriers are shown in light green) has grown by 8% year-on-year for the week in question. Overall total weekly seats at the airport have grown by 7.1% versus the same week last year to 353,109 seats across all 27 serving scheduled airlines. 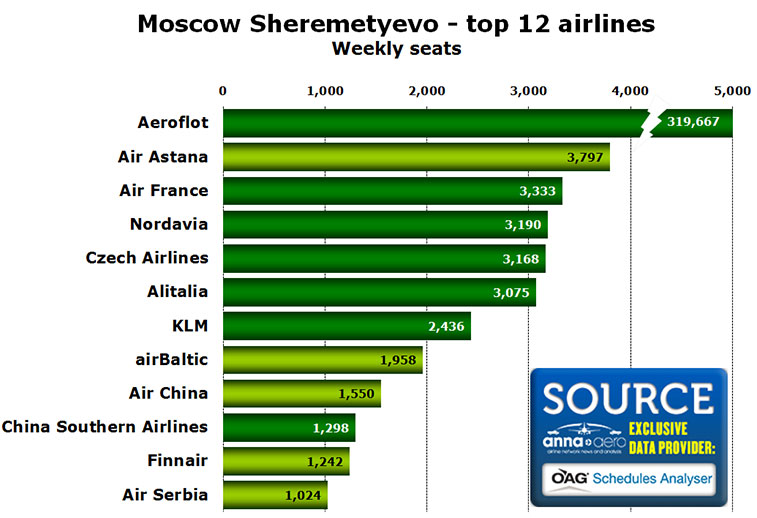 According to OAG schedules data, this November the top 12 airlines at Sheremetyevo represent 98% of all weekly seats (up from 97%) a year ago. The fastest growing of these is Aeroflot daughter airline Nordavia, which has increased its capacity massively at the airport by 480% since last November. While a more modest 20% annual growth was achieved by Czech Airlines, due in part to four additional weekly flights from Prague, it is by no means a marginal increase. While fellow SkyTeam members Air France (-10%), Alitalia (-10%) and KLM (-25%) have all reduced capacity into Moscow to accommodate the recent falls in traveller demand, Air Serbia has removed the most weekly seats since last November, falling by 31.2%.

Sheremetyevo’s top 12 routes constitute around one quarter (26%) of all capacity generated by the 132 services listed as operational from the facility according to OAG schedules data. The majority of the airport’s biggest routes in terms of weekly capacity are domestic, however international routes (highlighted in light green) do have second (Paris CDG) and third (Prague) positions. Jumping from 15th place last year to fifth in November 2015, Tel Aviv is the top 12 route which has shown the biggest annual increase at the airport (+38%), narrowly beating Prague (+37%) and Sochi/Adler (+34%). 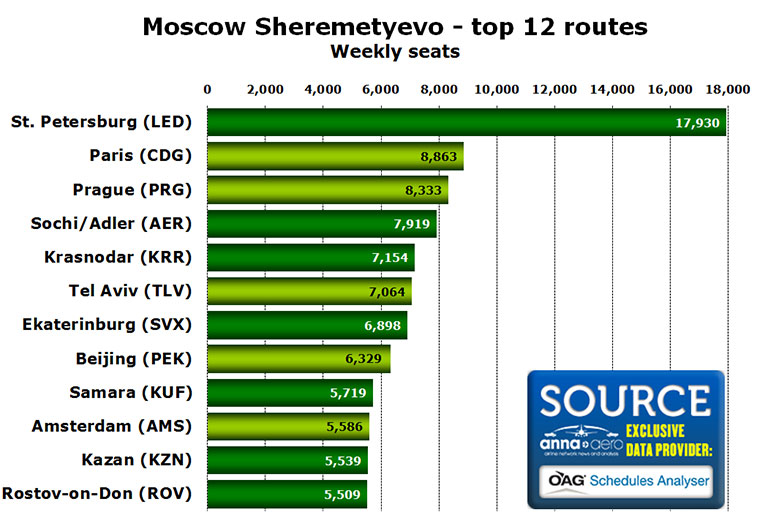 Although ten of the top 12 routes have shown weekly seat increases in the last year, both Amsterdam (-11%) and Samara (-7.0%) have witnessed capacity reductions. Routes falling out of the top 12 altogether over the last 12 months are Kiev Boryspil, Rome Fiumicino and the domestic sector to Mineralnye Vody. In terms of future route development, Aeroflot is due to introduce a domestic service to Saratov on 1 December, according to anna.aero’s New Route Database.