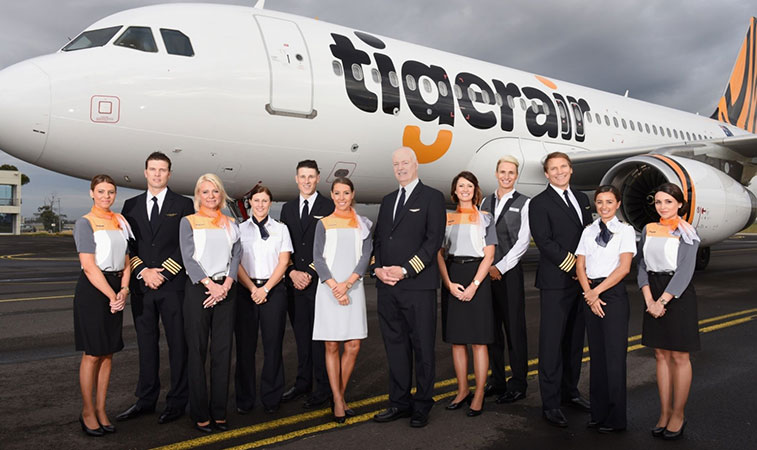 Last month, just before the airline’s eighth birthday today on 23 November, Tigerair Australia revealed new uniforms for cabin crew, pilots and check in staff, as well as the newest addition to its fleet – a brand new sharklet-equipped A320 which will be based in Sydney from 8 December to facilitate more domestic flying around Australia including additional services between Sydney and Cairns and between Sydney and Adelaide.

It’s a birthday week for the Australian arm of a prominent LCC brand ‒ Tigerair Australia (having originally launched as Tiger Airways Australia) commenced operating domestic flights in Australia eight years ago on 23 November 2007 from its home base in Melbourne to Mackay, Gold Coast and Rockhampton. Since then, the airline opened a second base in Sydney in July 2012 and a third base in Brisbane in March 2014. Having originally started life with just a single airframe, the airline’s fleet now boasts 14 A320s (according to planespotters.net), with three ex-Virgin Australia Airlines 737-800s due into the carrier’s fleet over the coming months, representing a modest increase in its fleet expansion. 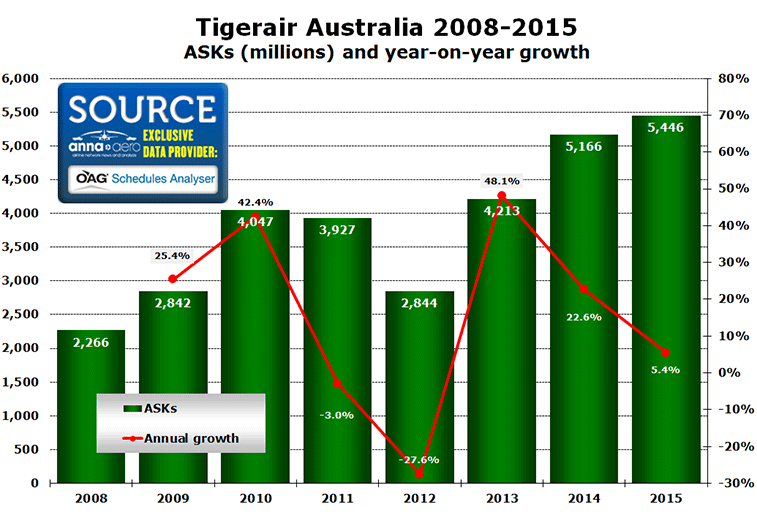 However, some of the airline’s natural growth in the middle of its short life was obviously curtailed as a result of the airline’s licence suspension by CASA in July 2011. As a result, operations were rationalised, with bases closed in Adelaide (which it had opened March 2009) and Melbourne Avalon (opened in November 2010), and the fleet reduced from 10 aircraft to eight. It is clear to see the cause and effect these remedial actions had in the LCC’s annual ASKs. Indeed, according to OAG schedule data, the airline cut its services from the 27 city pairs offered in 2011 to just 11 in 2012. However, the airline has since gone on to recover, in terms of its reputation and its network, and on its eighth birthday Tigerair Australia’s network from its three bases is as follows: Busy year. In August, Tigerair Australia moved into its new home at its biggest base – Terminal 4 at Melbourne Airport. In the eight years since operations began on 23 November 2007, the airline has carried 18 million passengers, breaking the landmark figure earlier this month ‒ the lucky 18 millionth customer, was Jacinta Mentes from Gold Coast.

Earlier this month, Tigerair Australia celebrated carrying its 18 millionth passenger since domestic operations first commenced in November 2007. In conjunction with some early eighth birthday festivities, a week of celebratory number eight-themed sales were launched, with base domestic fares from either $8, $18, $28 or $48. The LCC’s Head of Communications, Vanessa Regan, says this is a significant milestone for the airline. “Tigerair has come such a long way in eight years and is now delivering on the promise of consistent delivery of affordable fares, on time flights with great customer service. It doesn’t get much better than this with the majority of our routes on sale for less than the cost of a couple of movie tickets.”

“We’re proud of the contribution we make to this country through the provision of over 1,100 jobs and by enabling Australians to see more of their own back yard and more of each other, more often. Tigerair’s consistently great value fares stimulate air travel in this country and grow the air travel market which is great news for tourism, the economy and for the consumer.”

“Number eight is considered very lucky for some and it certainly will be for our 18 millionth passenger…[we will] surprise them with an $800 Tigerair Australia travel voucher,” said Ms Regan.

The first new service which will be inaugurated from Tigerair Australia’s new home – Terminal 4 at Melbourne (a facility shared with Jetstar Airways) – comes next month, as the airline adds a thrice-weekly connection to Coffs Harbour on 9 December, joining its existing service to the New South Wales city from Sydney. Next year Tigerair Australia will assume responsibility for three routes presently being flown by parent company Virgin Australia Airways – the latter having acquired the remaining 40% of the LCC it didn’t own for $1 (Australian) earlier this year from Singapore Airlines. From 23 March, three 180-seat 737-800s (reconfigured from its existing 176-seat layout) are being transferred from Virgin to take over the Adelaide-Denpasar, Melbourne-Denpasar and Perth-Denpasar routes. The 737s will remain on the Virgin AOC and will be flown by its pilots alongside Tigerair Australia cabin crew. It certainly has been a busy year for the LCC, and the next 12 months appear to be similarly hectic.