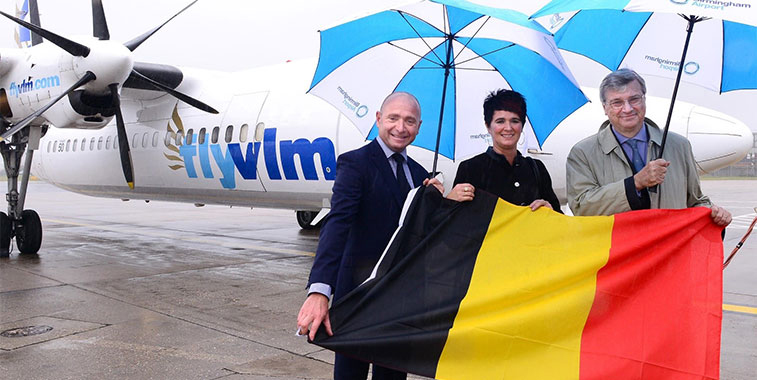 On 5 October, VLM Airlines commenced a thrice-weekly service between Antwerp and Birmingham. This year, the Belgian Airport has seen monumental growth helped not only by VLM Airlines, but also from Jetairfly which commenced six new routes from the facility in April. Over the nine month period between January and September, Antwerp has averaged an annual monthly growth rate in passenger traffic of 50%.

Belgium is a compact and multilingual country which effortlessly blends the historic with the new; from countless castles and medieval belfries to innovative art museums and hip cafés. It is also home to amazing food, as confirmed by anna.aero’s Assistant Editor, Jonathan Ford, who recently visited Brussels for the launch of All Nippon Airways’ launch of services from Tokyo Narita. From January to September this year, passenger traffic in total for Belgium is recorded as being up by 9.7%, which is equivalent to nearly 2.4 million additional passengers passing through the country’s five commercial airports. 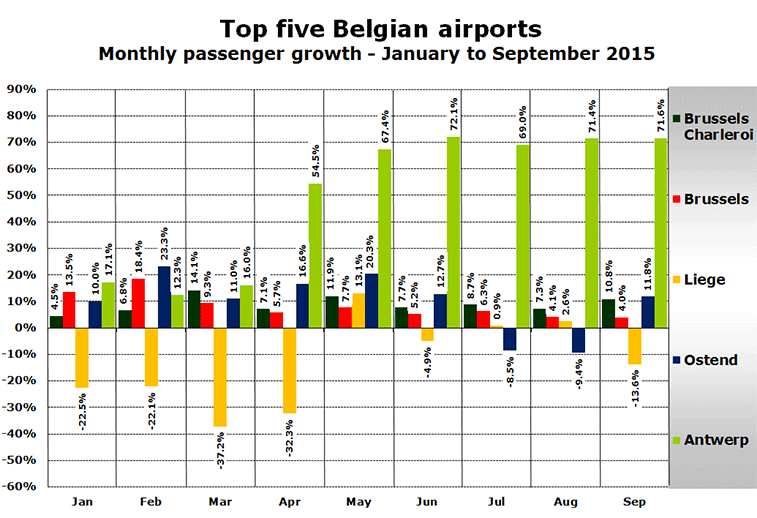 Between 17 April and 20 April, Jetairfly added six new routes from Antwerp to Alicante, Barcelona, Berlin Tegel, Malaga, Milan Malpensa and Palma de Mallorca, while a seventh route was added on 31 October connecting the Belgian airport to Rome Fiumicino with thrice-weekly flights. Not only has Antwerp seen growth from Jetairfly this year, but VLM Airlines has also commenced two new UK routes from the facility, starting with Southampton which commenced on 23 April and Birmingham which started on 5 October. As a result, since April the airport has seen passenger traffic grow between 52% and 75% per month, with an average monthly passenger increase for the first nine months of 2015 being around 50%. Before this raft of new routes commenced, it should be noted that Antwerp was seeing an average monthly increase of 15% between January and March.

Liege lets the side down…

For the first four months of 2015, Liege Airport has seen passenger traffic slump between 22% and 38%, with May finally showing growth at just over 13%. However, in September the airport once again recorded a double-digit decline of just under 14%. This is equivalent to the airport seeing 16,800 fewer passengers during the first nine months of 2015 when compared to the same period of 2014. With other months registering small levels of growth during the January to September period, this topsy-turvy year for Liege means its overall result so far in 2015 is down 6.8%. 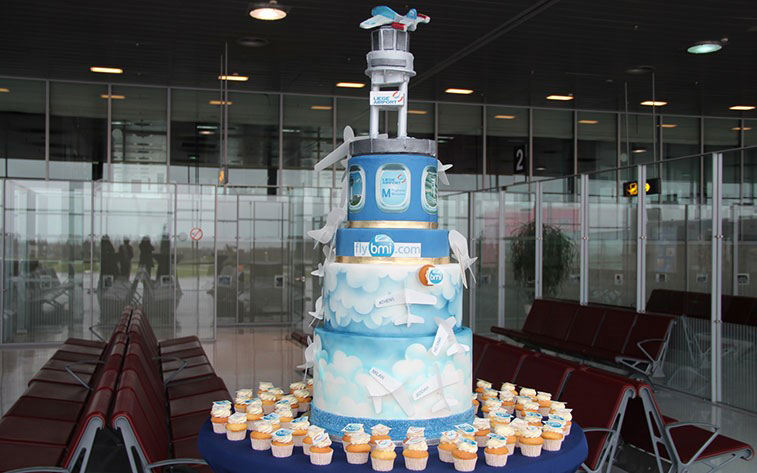 On 30 March, Liege Airport celebrated with a cake the launch of bmi regional’s 12 weekly flights from Munich. For the first nine months of 2015, the airport has seen passenger numbers slump by 6.8%, with the new Munich service being the only year-round scheduled service the airport has apart from several Jetairfly services. 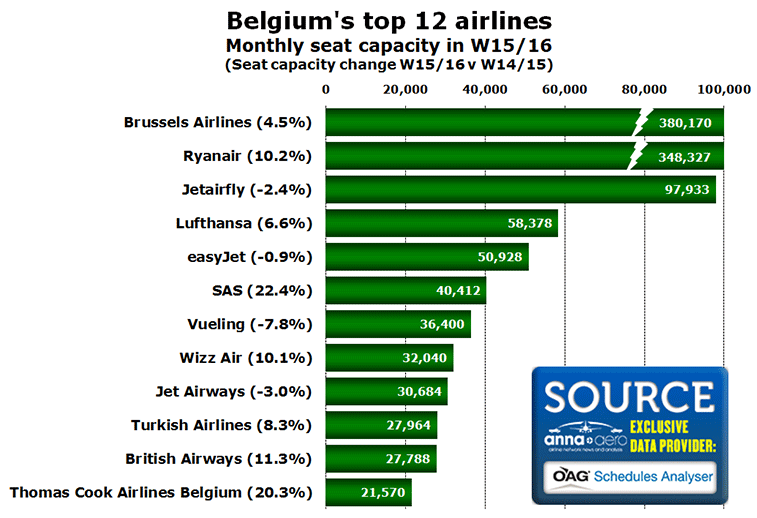 Ryanair catches up with national carrier

Ryanair is steadily catching up with Belgium’s national carrier, Brussels Airlines, in terms of the amount of monthly seats it will have on offer this winter. With an increase of just over 10% compared to Brussels Airlines’ 4.5%, the Irish ULCC could overtake the Star Alliance member to become the number one carrier in Belgium next year. Ryanair currently operates 12 routes from its Brussels Airport base, while its other base at Brussels Charleroi consists of 77 year-round and seasonal routes. Services to Bratislava will move from Charleroi to Brussels’ in April, while a service to Larnaca will also be introduced in January from the city’s larger facility. Despite growing its operations from Antwerp, and also from Ostend, Jetairfly is reporting a decline in seat capacity of 2.4% according to OAG Schedules Analyser. Within the top 12, the one airline that is showing the most impressive growth is SAS, which has increased its operations from Brussels by nearly 10,000 seats, helped by the introduction of flights between Brussels and Gothenburg on 26 October. With growth of over 20%, Thomas Cook Airlines Belgium joins the top 12, knocking out Iberia which only reported growth of 5%, resulting in the oneworld carrier placing in 13th position this winter season. 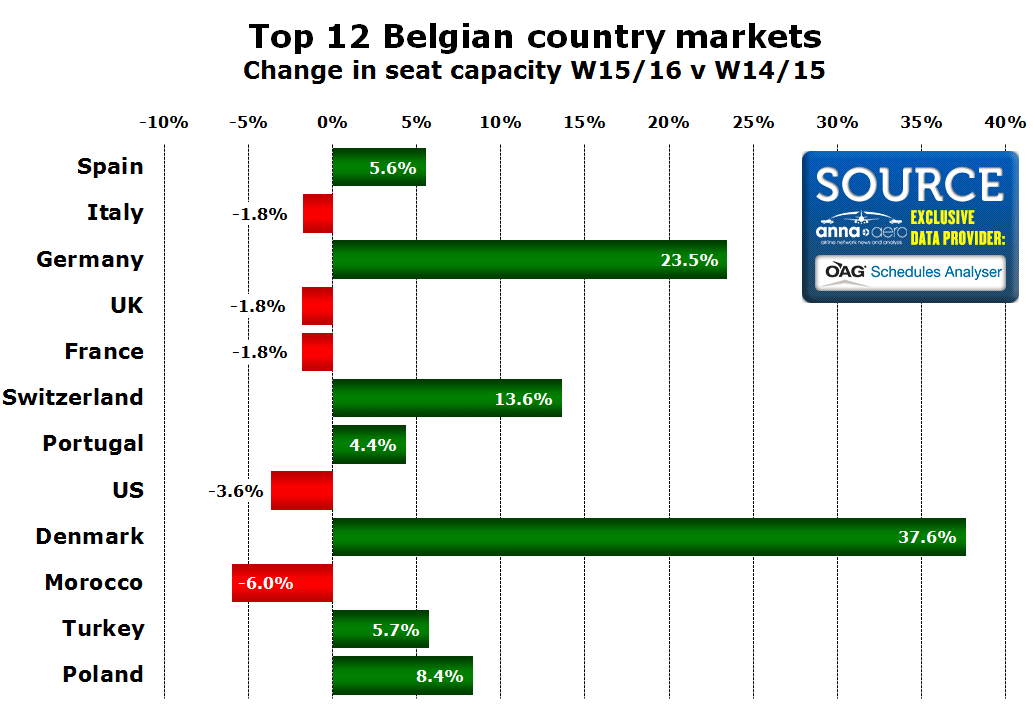 On 25 October, All Nippon Airways commenced a daily service between Tokyo Narita and Brussels. The 787-8 operated route has propelled Japan to become the 39th most popular country market from Belgium this winter, overtaking key Asian markets such as China (45th), and placing just behind others such as Thailand (35th) and Qatar (32nd). Commenting on the launch of services to Japan at the route launch last month, Arnaud Feist, CEO Brussels Airport, said: “Currently, over 240 Japanese companies have operations in Belgium. Last year, 19,000 Belgians travelled to Japan and 114,000 Japanese nationals visited Belgium. Along with this and the creation of 100 new direct jobs at the airport as a result of this new service, it highlights the significance that this new air service by All Nippon Airways brings to the two nations.” As can be seen within the top 12, one country market which is showing exceptional growth when compared to the rest is Denmark, which is up nearly 38%. Although Germany is showing as being 23% up in seat capacity when compared to last year, it has seen more seats added due to it having a much bigger capacity from Belgium when compared to Denmark.

In relation to the outlook for 2016, Brussels Airlines will commence operations from Brussels to Belfast City on 27 March with an initial five times weekly service, further enhancing the UK market. Elsewhere on 30 March, Blue Air will add its third link from Brussels to Iasi in Romania, while Jetairfly will introduce a further two new routes from Antwerp to Nador (in Morocco) and Spilt (in Croatia) on the 26 March and 1 April respectively. Last month, anna.aero was fortunate enough to be invited along to the inaugural flight of All Nippon Airways from Tokyo Narita by Brussels Airport. The inaugural ceremony included a water arch salute and a Kagami-biraki breaking to symbolise the opening of the new route. Since launching, the Japanese market has overtaken the Chinese market from Belgium in relation to seat capacity.