To help drive down the airline’s unit seat costs as it evolves into a ULCC, Frontier has started receiving its first Airbus A321s to join its existing A319s and A320s. The first A321 to join the fleet in early October features Otto the Owl. Subsequent A321 deliveries have featured Courtney the Cougar and Virginia the Wolf.

Frontier Airlines is America’s eighth biggest domestic airline; not as big as rapidly-expanding Spirit Airlines, but offering more monthly seats than the likes of Hawaiian Airlines, Allegiant Air and Virgin America. Despite this it has well under 2% of the US domestic market. During the last couple of years the airline has undergone some fundamental changes. Under new owners Indigo Partners, the airline is evolving from an LCC to a ULCC, apparently with some success. From a network perspective the airline has been shifting capacity out of its traditional home market of Denver and establishing focus cities across the US. As recently as August 2014 almost 83% of Frontier’s flights either took off from or landed at Denver. Just nine months later, in May 2015, this percentage had fallen to below 50%. Since then Denver flights have accounted for just under half of all Frontier’s operations. Overall in the final quarter of 2015 Frontier is operating just 3% more flights than in the last quarter of 2014. 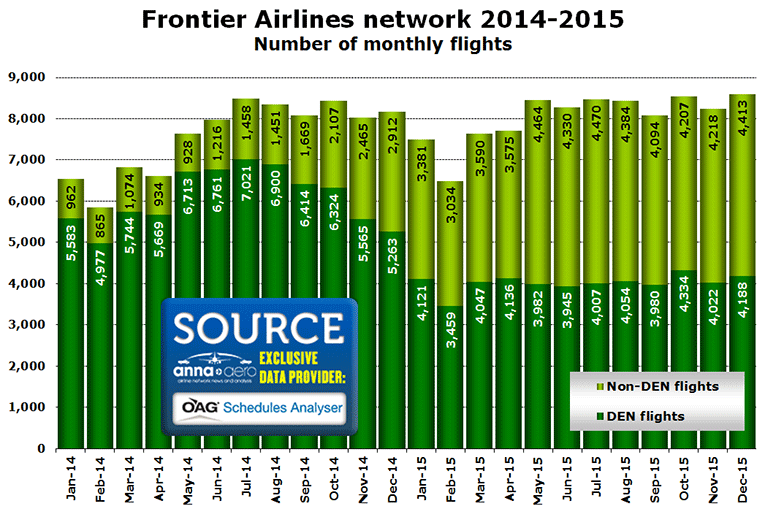 Airports served falls from 79 to 54 in three years

Just three years ago, in November 2012, the number of seats offered at Denver International Airport was over 18 times more than the airline’s next busiest airport, Orlando. In November 2015 the multiplier is just over three, with Denver capacity down 43% and Orlando capacity up 243%. During that period the number of destinations served non-stop from Denver has fallen from 64 to 44. 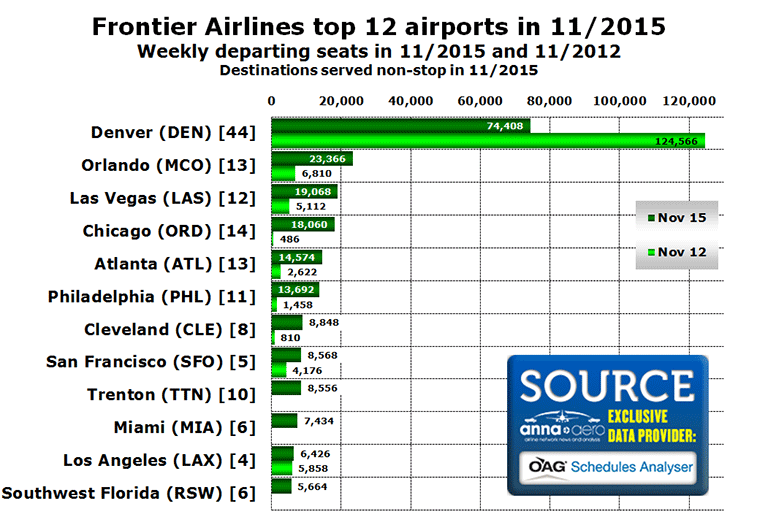 Among Frontier’s top 12 airports this November are three that were not served three years ago; two in Florida (Miami and Southwest Florida) and Trenton. Apart from Denver, Frontier now offers flights to at least 10 destinations from no fewer than six other airports; Atlanta, Chicago O’Hare, Las Vegas, Orlando, Philadelphia and Trenton. In total Frontier currently flies to 54 airports, 49 in the US as well as Cancún, Puerto Vallarta and San Jose Del Cabo in Mexico, Montego Bay in Jamaica, and Punta Cana in the Dominican Republic. Back in November 2012 a total of 79 airports were served. Despite this the number of routes operated has increased during the same period from 99 to 112. 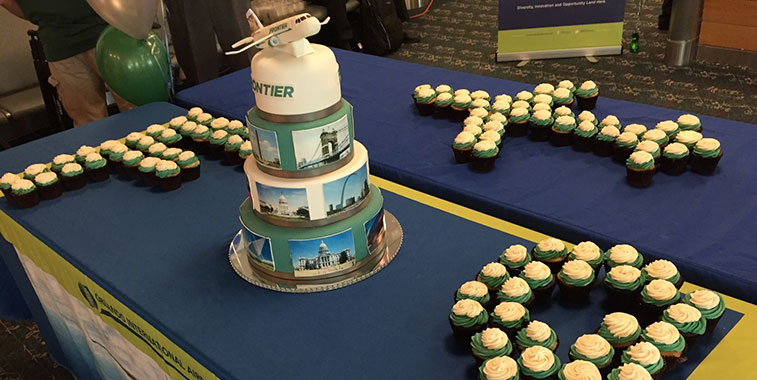 Orlando is Frontier’s second busiest airport (after Denver) with 13 destinations served non-stop from the Floridian airport. The airport recently celebrated the launch of new flights to Indianapolis and Los Angeles while Detroit services started last week.

Analysis of the number of weekly flights offered by Frontier on each of its routes in November 2012 and now also shows a shift towards more routes served at least daily. In November 2012, Frontier operated 43 of its 99 routes (43.4%) with less than daily frequency. Now the proportion is just 23.2% (26 out of 112). However, three years ago nine routes were served with at least four daily flights, now there are just two (Denver-Las Vegas and Denver-San Francisco). 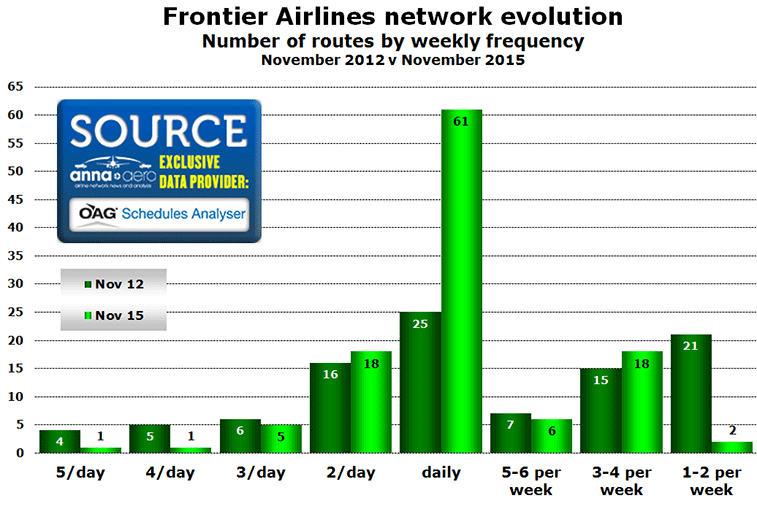 According to anna.aero’s New Route Database, Frontier has launched 124 new services since the beginning of 2013, of which 21 were in 2013, 78 were in 2014 and there have been 25 so far this year. Of the 78 routes launched in 2014 fully 67 were in a seven month period from June to December. Many of these routes were planned as seasonal services. Four more routes are expected to launch before the end of this year, while six new routes have already been announced for 2016.

Frontier currently operates a fleet of 60 narrow-body Airbus aircraft; 34 A319s, 23 A320s and three A321s. The three A321s have all been delivered since the beginning of October and feature Frontier’s famous animals; in this case Otto the Owl, Courtney the Cougar (possibly named in honour of Courteney Cox’s TV series Cougar Town) and Virginia the Wolf. According to Airbus data a further 17 A321s are still to be delivered along with 18 A319neos and 62 A320neos. 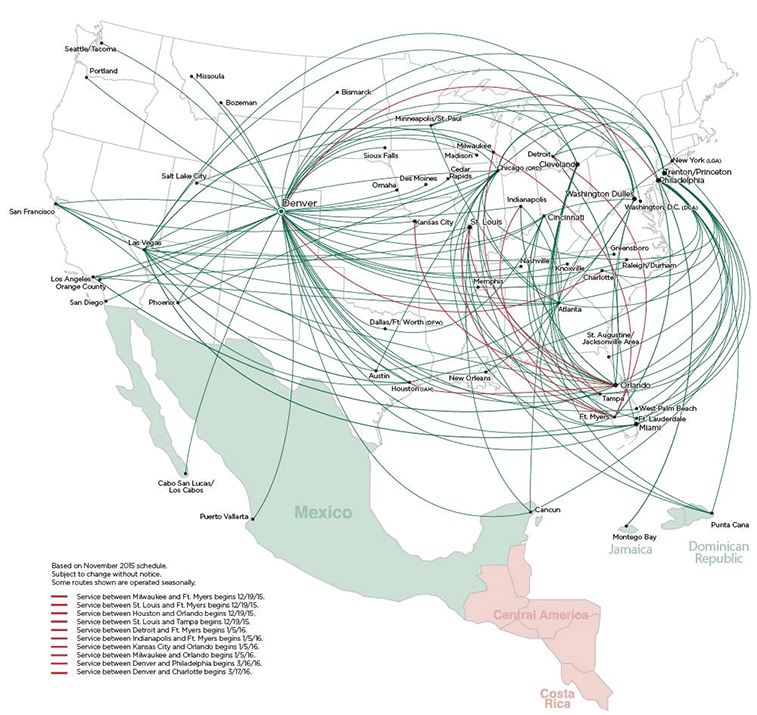