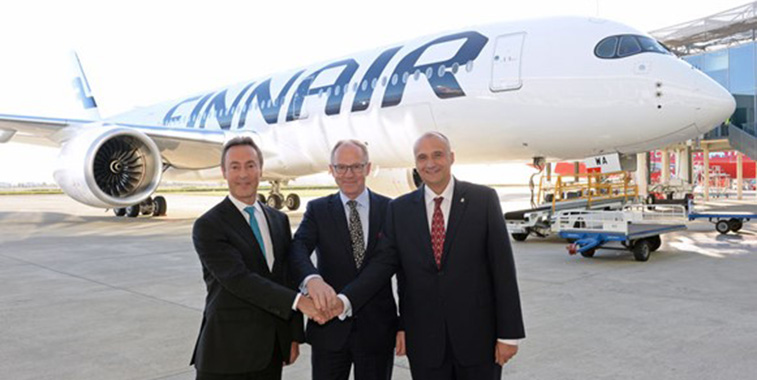 Airbus President and CEO Fabrice Brégier; Finnair CEO Pekka Vauramo; and Eric Schulz, President – Civil Large Engines, Rolls-Royce, celebrate the arrival of Finnair’s first A350 in Toulouse. In the month of October, Airbus has delivered a total of four A350s; two to Qatar Airways, and one each to Finnair and Vietnam Airlines.

Following 126 airframes being handed over in September, Airbus and Boeing slowed down their delivery performance in October by distributing a total of 107 aircraft to various customers, down five units when compared to the same month of last year. The American manufacturer maintains its lead over its European rival in terms of aircraft delivered in October, by distributing nine more units to its respective customers. In the same month last year, it is worth noting that Boeing delivered 11 more aircraft. With this, Boeing strengthened its lead in the 2015 delivery race to 137 units, up from 128 in September.

Having delivered more than 100 aircraft for the ninth month in 2015, the two manufacturers have once again recorded an impressive total. The combined deliveries of both producers for the tenth month of the year was 107, of which 58 came from Boeing and 49 from its European counterpart (Airbus delivered the same amount in September). Notably, the American manufacturer has decreased its total deliveries for October when compared to the same month of last year by three units. Airbus on the other hand delivered one fewer aircraft than in October 2014. Overall 71% of deliveries in October were narrow-body aircraft. However, when looking at the wide-body market, Boeing produced 61% of the aircraft, down from the 71% majority it held over Airbus last month. 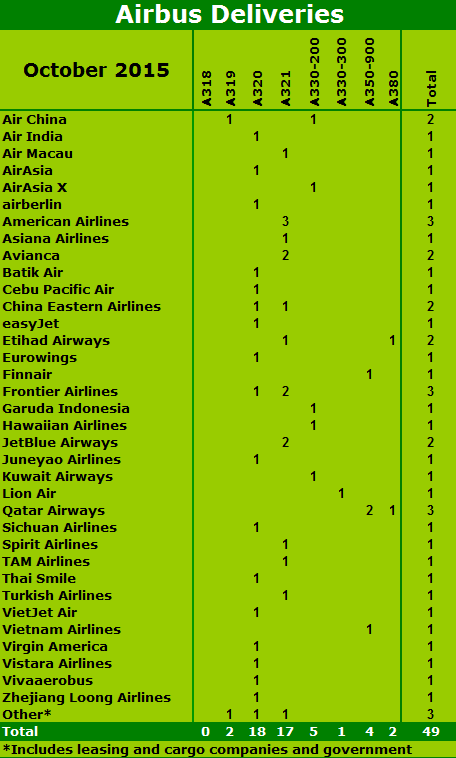 Airbus ended October with a total of 49 units being delivered to airlines, which is the same amount of airframes as the company delivered in September. However, it is one less than what it delivered in the corresponding month last year. Over the period of January to October in 2015, the European producer has delivered 495 units, representing an increase of two units on the same time period analysed in 2014.

For the month of October, single-aisle deliveries were led by the A320 (18 units, down seven from September), with a total of 37 single-aisle aircraft being provided to carriers around the world (down one when compared to the same month last year). This means that Airbus produced two fewer narrow-body aircraft than Boeing in October. A total of 17 airlines received a single A320 during October, with one also going to a private buyer. In relation to A321 deliveries, American Airlines was the number one recipient, picking up three of the type. Frontier Airlines and JetBlue Airways each received two of the type.

Looking at wide-body deliveries, Airbus handed over 12 airframes in October, one more than in September. Following on from the delivery of two A380s in September, the European producer handed over the same amount in October, with both going to MEB3 carriers, Etihad Airways and Qatar Airways. What is surprising to note however is that Emirates, the world’s largest A380 operator, did not pick up one of the type during October. Last month also witnessed four A350-900s being delivered, with one going to Finnair, the first European operator of the type, and another to Vietnam Airlines. Qatar Airways received two of the type. 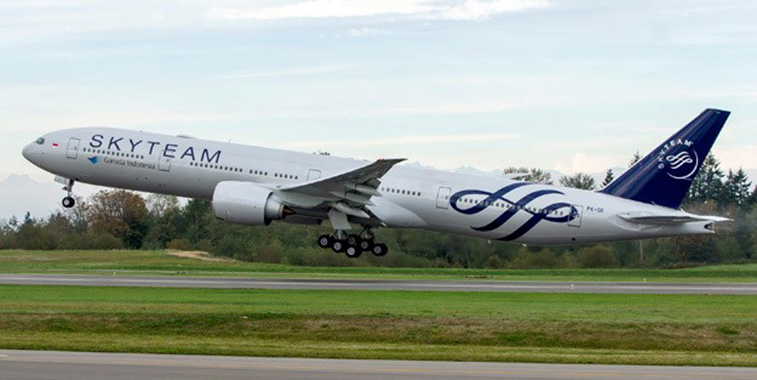 On 28 October, Garuda Indonesia welcomed the delivery of its first 777-300 in a SkyTeam livery. Arif Wibowo, President and CEO, Garuda Indonesia, commented on the delivery by saying: “We continue to grow our network with the SkyTeam alliance and the 777-300’s efficiency and economics allow us to stay competitive and with an interior that our passengers love. We’re proud to see our latest 777-300 in the SkyTeam livery.” 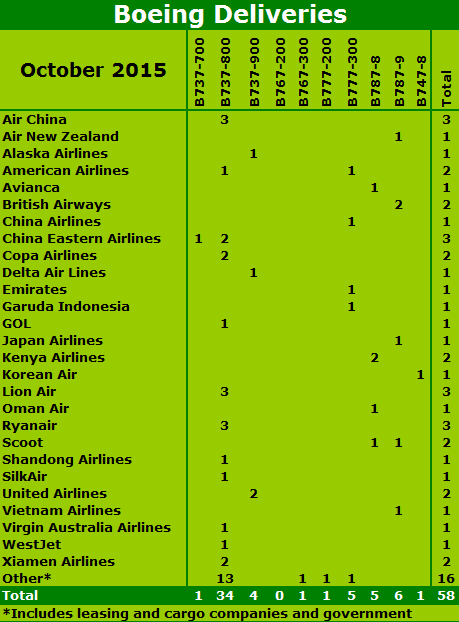 Boeing closed October with a total of 58 deliveries, 19 fewer than in September, and three fewer than in the corresponding month of 2014. Nevertheless, the American producer’s total for the first ten months of 2015 is 634 aircraft, an impressive 45 units more than in the same period of last year.

Airlines received a total of 39 single-aisle units from Boeing in October, 12 fewer than in September, and equal to that of October 2014. It was still two more than Airbus produced, but down from the 13 unit lead it had in single-aisle deliveries during September. Air China, Lion Air and Ryanair were the largest recipients of the 737-800 in October, as all three incorporated three of the variant into their fleets. In total, 15 airlines were delivered single-aisle units from the American manufacturer during October, four fewer than the 19 carriers in September. Nonetheless it should be noted that 13 of the deliveries for the 737-800 were to leasing companies, the same as it was in September. Overall 33% of single-aisle deliveries from Boeing last month were to Asian airlines (down 8% from September), with North American carriers taking only 15% of deliveries. The rest of the world and leasing companies accounted for the remaining 52%.

Analysis of wide-body deliveries reveals that Boeing handed over a total of 19 units to airlines in October, seven fewer than in September. The result also shows that the American producer delivered three fewer wide-body airframes than it did in the same month of 2014. Boeing handed over 11 787s in October, two fewer than in September. British Airways was the largest recipient of the 787-9, taking delivery of two of the variant. By contrast, United Airlines, which was the largest recipient of the 787 for the last few months took none of the type in October. In total, eight airlines took delivery of 787s. It is also worth noting that one 747-8 was delivered in October to Korean Air, the third of the type for the carrier, which took delivery of its first 747-8 in August. 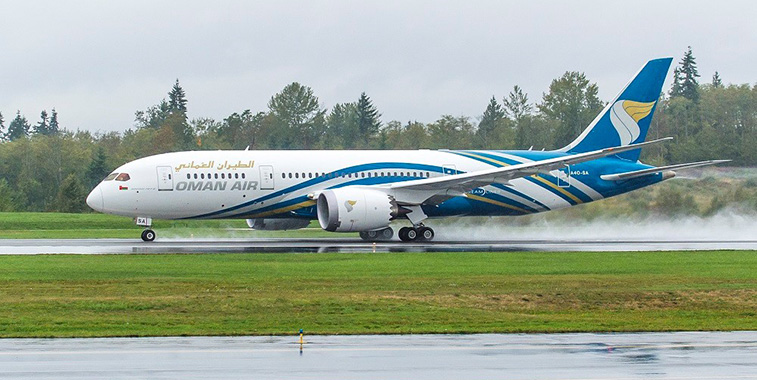 In early October, Oman Air took delivery of its first 787-8. The carrier will deploy the Dreamliner on routes to Saudi Arabia and Europe and becomes the fourth airline in the Middle East to operate the aircraft after Etihad Airways, Qatar Airways and Royal Jordanian.