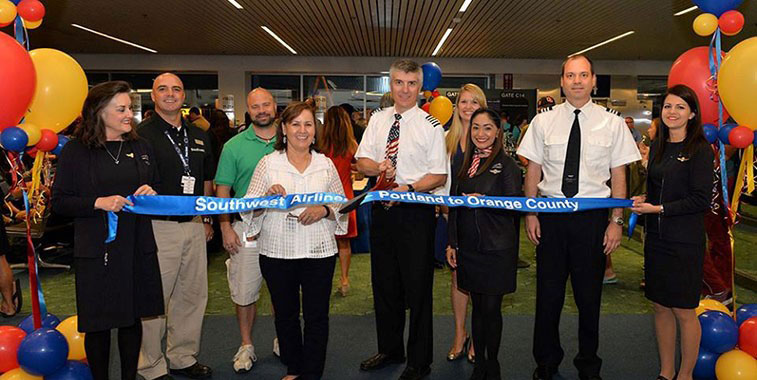 On 8 August, Portland Airport welcomed Southwest Airlines’ new twice-daily service from Orange County. The airport pair is also served by Alaska Airlines 20 times a week. The city pair between Portland and Orange County has grown by nearly 49% in seat capacity over the past 12 months as a direct result of Southwest Airlines’ inauguration. The increase in seats has meant that Portland is now the 11th most popular route from the Californian facility this winter, climbing from 14th last year.

Orange County Airport is one of five commercial airports to serve the Los Angeles metropolis, along with Burbank, Los Angeles (LAX), Long Beach and Ontario. Its main catchment area includes Santa Ana, Westminster, Huntington Beach, Irvine and Laguna Hills. In October 2010, the airport welcomed its first international carrier in the form of Air Canada, which commenced services to Toronto Pearson, however services came to an end later that year. Currently the only international carrier to serve Orange County is WestJet, which since 2011 has provided year-round services to Vancouver. Nonetheless the main focus of the airport’s route map is on domestic services, with only four of the airport’s 26 routes being to international destinations. Along with WestJet serving Vancouver, Alaska Airlines serves San Jose del Cabo and Puerto Vallarta in Mexico, while Southwest Airlines also serves those two routes, as well as Mexico City. Between January and September, the airport handled just over 7.5 million passengers, up 6.7% when compared to the same period of 2014. 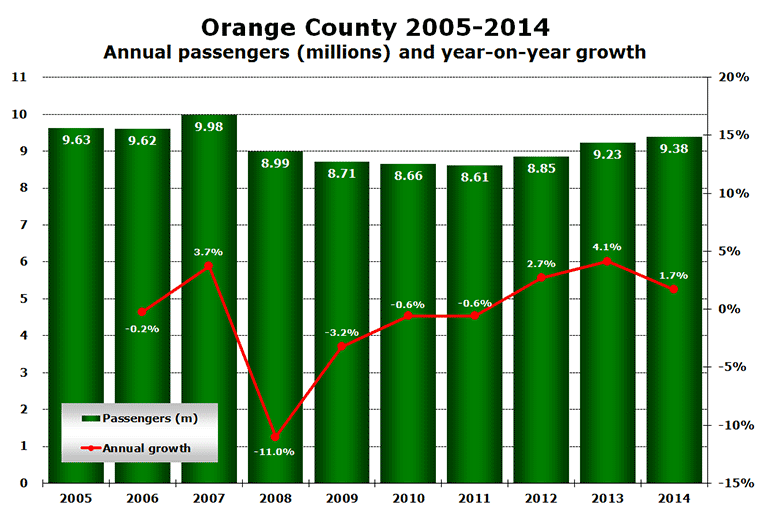 As already explained, for the first nine months of 2015, passenger traffic at Orange County is up 6.7%. If this percentage is to mirror that of the overall growth for the airport for this year, then it can expect passenger figures to peak at just under 10 million, at around 9.8 million. As it can be seen in the graph above, the Californian facility has indeed seen a dip in passenger traffic over the past couple of years, with growth finally being seen in 2012. This was a year in which Interjet became the airport’s second international carrier, offering daily flights to Mexico City and Guadalajara. Nonetheless like Air Canada, Interjet no longer serves these routes. In terms of the airport’s seasonality profile in 2014, Orange County scores an “excellent” 0.43 on anna.aero’s SVID (Seasonal Variation In Demand) calculator. 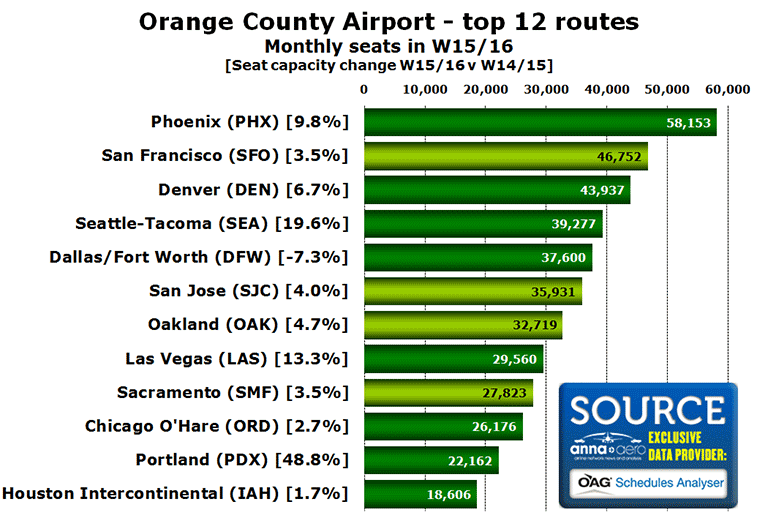 After recording a growth in seat capacity of 9.8%, it is the link to the Arizonian hub of Phoenix that remains the number one route from Orange County. One key route which has left the top 12 when compared to last year is Atlanta, an airport pair which is served solely by Delta Air Lines. It has now become the 13th biggest route, a consequence of Delta reducing seat capacity on the sector by 6.1%. Another factor which has contributed to Atlanta’s decline is Southwest Airlines’ launch of a twice-daily service to Portland, resulting in the link to the Oregon airport seeing just under 49% extra seats being added, and growing to become the airport’s 11th most popular connection. Elsewhere outside of the top 12, one route which has also seen significant growth is Southwest’s link to Dallas Love Field (17th most popular), which is recording a rise in seat capacity when compared to 2014 of 42%. On the other side of the spectrum however, the link to New York Newark (16th), which is another monopoly route, this time for United Airlines, is showing a decrease in capacity of 2.1%. In relation to international routes, the connection with San Jose del Cabo (18th), now served by Alaska Airlines as well as Southwest, is recording a growth in seat capacity of just over 31%. What can clearly be seen though is that all four of the airport’s routes to fellow Californian airports (highlighted in light green) appear in the top 12. 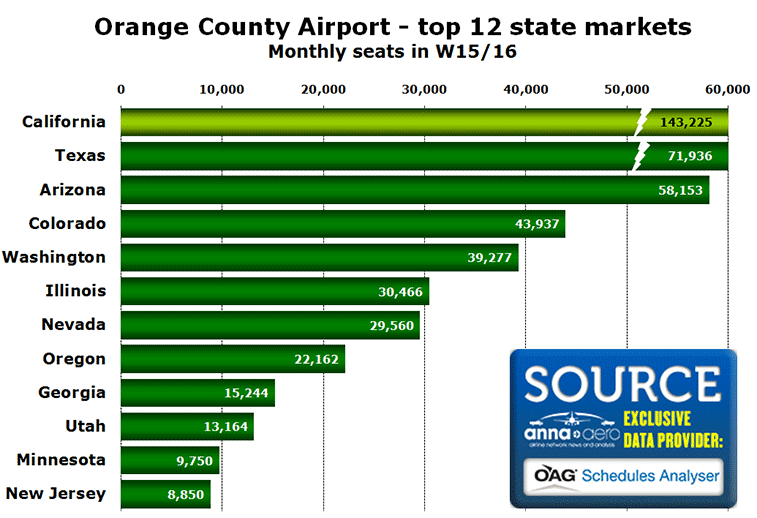 California is the largest market

Orange County Airport’s largest market is the ‘domestic’ state market of California (highlighted in light green). The airport is connected to Oakland, Sacramento, San Francisco and San Jose airports, with all but San Francisco being monopoly routes for Southwest (United also serves San Francisco with United Express operations). Altogether, Orange County is connected to 13 of the US’ 52 states, with Missouri being the latest state to be served, with direct flights to St. Louis and Kansas City being launched on 22 November by Southwest. If anna.aero were to class Mexico and Canada as markets within this analysis, Mexico would be the 12th most popular, while Canada would place in 14th position behind Missouri.

Next year Alaska Airlines will commence services from Orange County to Reno-Tahoe and Santa Rosa, routes which are expected to be operated by Horizon Air. Elsewhere the only other new connection for 2016 at present is Delta Air Lines entering into competition with Alaska Airlines and Southwest Airlines on the link to Seattle-Tacoma from May next year. On 28 June, Southwest Airlines launched a new daily service between Austin-Bergstrom and Orange County. As a result of its launch, the route has become the 21st largest route from the Californian facility with a monthly seat capacity this winter of 4,290 seats.