Ryanair, easyJet, Vueling, Norwegian and Wizz Air’s winter 2015 growth markets revealed; Spain #1 for three of them; UK in top 3 for all 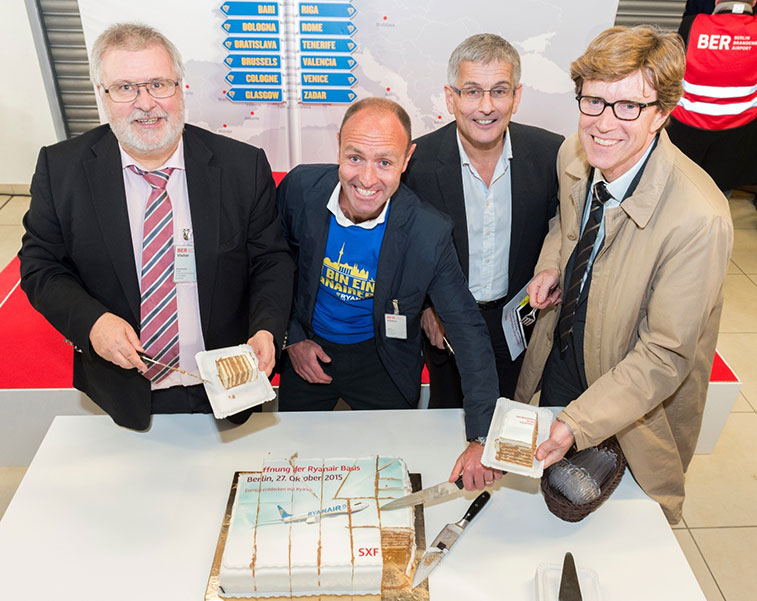 With the northern hemisphere winter season well and truly under way, we thought it would be interesting to compare the schedules of the five leading pan-European (U)LCCs (Ryanair, easyJet, Vueling, Norwegian and Wizz Air) to see which country markets they serve have seen the biggest increases in weekly flights. Using the first week of February in 2016 and 2015 as our selected time periods, all five carriers are reporting year-on-year growth in weekly flights ranging from Wizz Air (+23.6%), Ryanair (+18.4%) and Vueling (+14.2%) to the more modest growth of easyJet (+5.3%) and Norwegian (+4.5%).

Already the largest of the five carriers, Ryanair is also growing rapidly this winter with flights up almost 20% in February 2016 versus this year. Four of Europe’s five biggest country markets lead the way in terms of increased flights (France actually sees a slight reduction in flights), with Spain just beating Germany, the UK and Italy. In percentage terms the most significant growth is in Germany where the additional 251 weekly flights represents a year-on-year increase of 64%, mostly driven by the airline’s opening of a new base at Berlin Schönefeld. Spain’s growth is equivalent to 21.2%, while growth in Italy is below average (for Ryanair), at 11.6%. Despite Ryanair’s decision to close its two Danish bases in Billund and Copenhagen due to local employment issues, Denmark ranks fifth among country markets for most additional flights. For the first time this winter Ryanair is serving Israel having launched flights to Eilat Ovda from a number of bases in recent weeks. 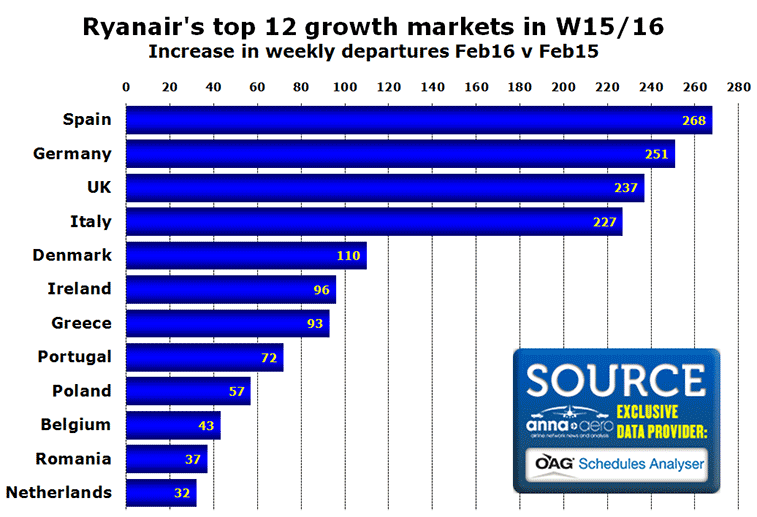 easyJet’s growth is less evenly distributed among its country markets with the UK having more than three times as many new weekly frequencies this winter as any other market. The 212 additional weekly flights represent growth of 8.8%, well above the easyJet average of 5.3%. However, in terms of impressive growth rates in easyJet’s bigger markets, Austria (+37.5%) leads the way ahead of the Netherlands (+25.8%) and Portugal (+17.9%). At the other end of the scale, Morocco (22 fewer flights representing a 26.5% reduction) and Italy (40 fewer flights representing a 5% reduction) have seen the biggest cuts in weekly flights. 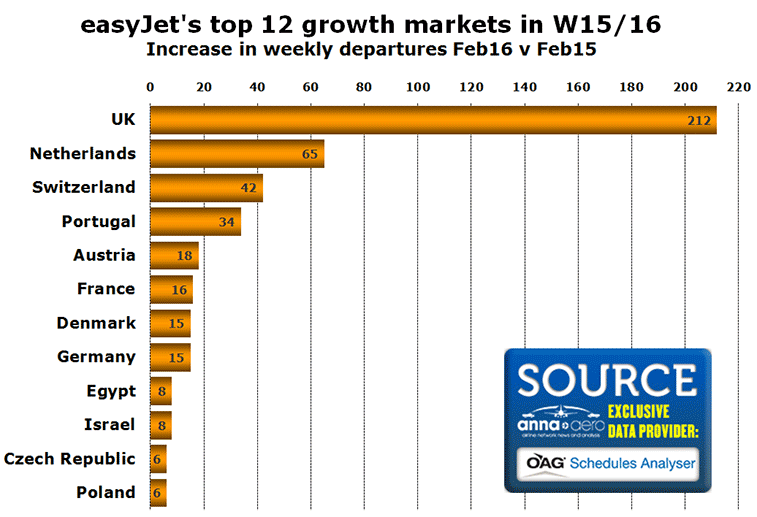 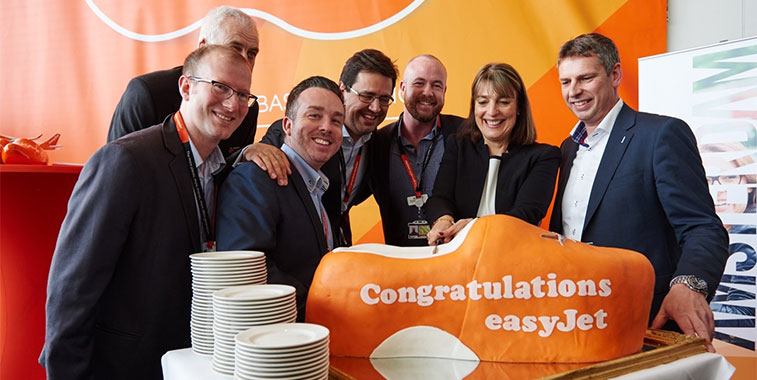 Making Amsterdam an official base in March has helped easyJet expand its Dutch network and made the Netherlands the airline’s fastest-growing country market outside of the UK this winter with an additional 65 weekly flights.

If easyJet is primarily focussed on growth in its home market, then the same applies to Vueling, only more so. Nearly two-thirds of the airline’s 196 additional weekly flights depart from a Spanish airport, indicating strong year-on-year growth of domestic routes. However, the growth in Spanish routes at 14.5% is only just above Vueling’s network average of 14.2%. For impressive percentage growth look no further than Switzerland (+250%), Algeria (+217%) and Austria (+100%). Admittedly, these are all from very low bases; Switzerland has grown from six weekly flights to 21, Algeria from six to 19 and Austria from four to eight. The airline’s second biggest country market of Italy has actually seen a modest 4.3% reduction in weekly flights from 326 to 312. 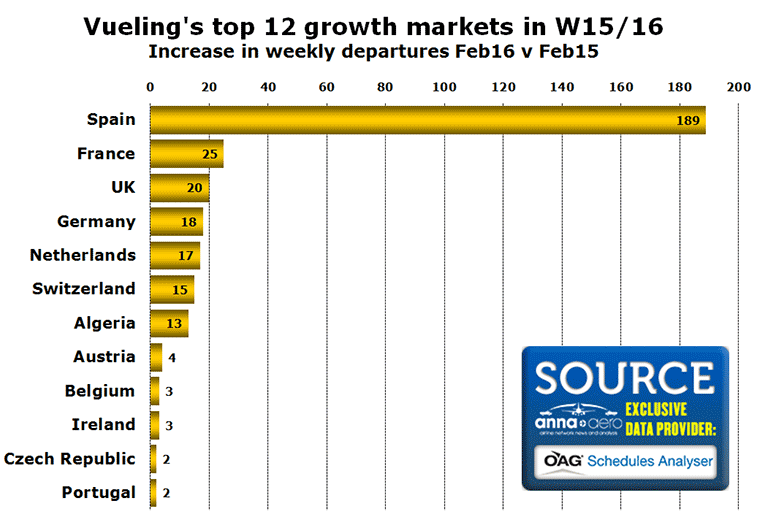 Norwegian: Growing in the Americas

Among these five (U)LCCs, Norwegian is reporting the lowest growth in flights at just 4.5%. However, some of this growth is coming from its expanding network of long-haul routes operated by its 787-8s, so seat capacity growth will be higher. Now operating with a mix of its historic DY code but also the new D8 code, half of Norwegian’s winter increase of 129 weekly flights comes from growth at Spanish airports (representing growth of 26%), including the launch of Spanish domestic routes to the Canary Islands. The number of weekly flights from US airports has grown by 76% from 29 to 51 while Guadeloupe, Martinique and Puerto Rico are new country markets for the airline this winter. 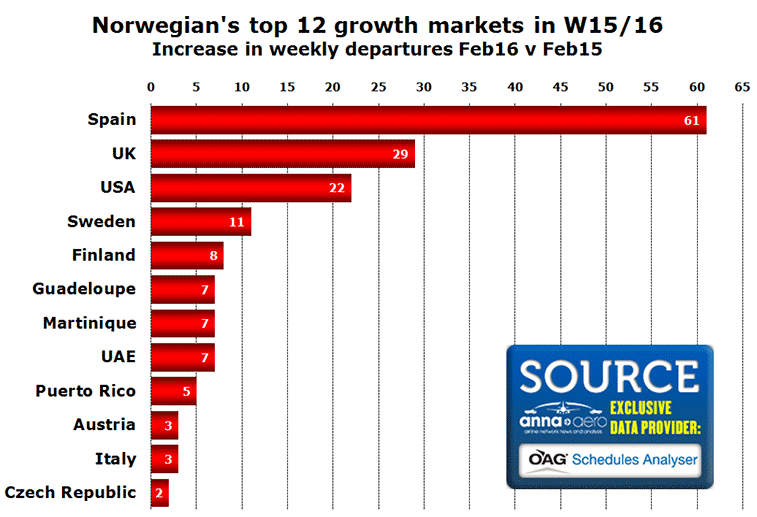 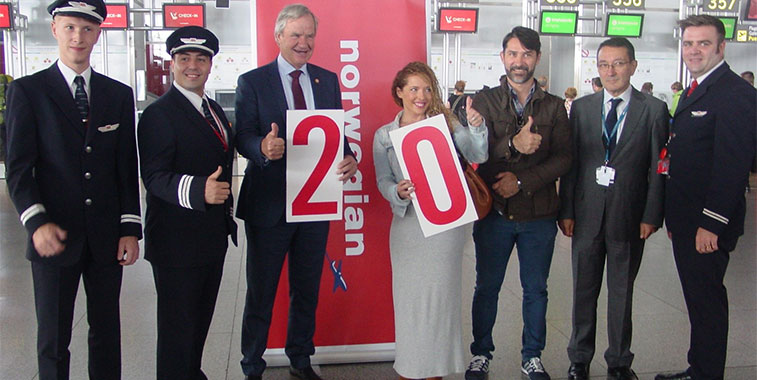 Norwegian recently celebrated the passing of 20 million passengers in Spain. For this coming winter the carrier will add an extra 61 weekly departures from Spain, helped by the LCC launching its first winter operations to Birmingham and Edinburgh from the nation. The airline has also recently launched services in the Spanish domestic market.

Wizz Air’s winter growth is focussed on two main markets; Poland and the UK. In percentage terms both have seen an increase of around 30% in flights, slightly above the airline’s average. Overall, the ULCC is operating some 24% more flights this winter than last, so it’s not surprising that many country markets have seen an increase in Wizz Air operations. In percentage terms, Wizz Air’s growth is spread fairly evenly across its network, though Romania’s 4% growth is significantly below the airline’s overall average. Among the airline’s other top 10 largest country markets Italy is up 11%, Hungary and Spain are up 16%, while Germany (+28%), Norway (+29%), Bulgaria (+38%) and Sweden (42%) are all growing faster than average for the airline. 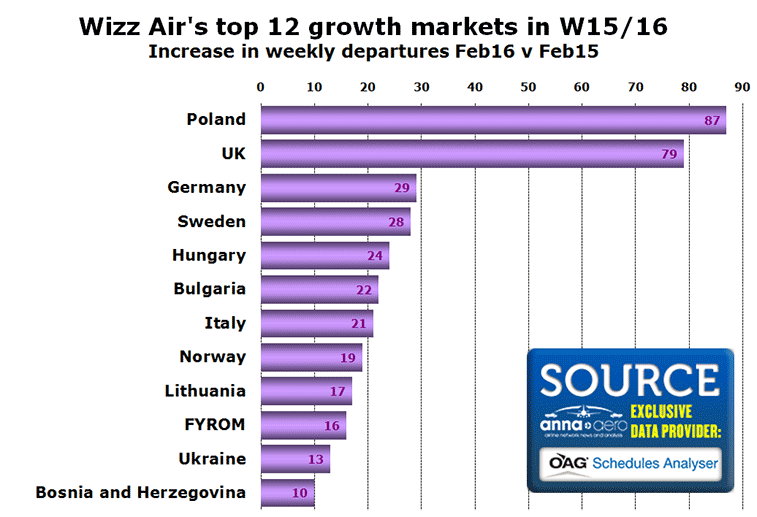 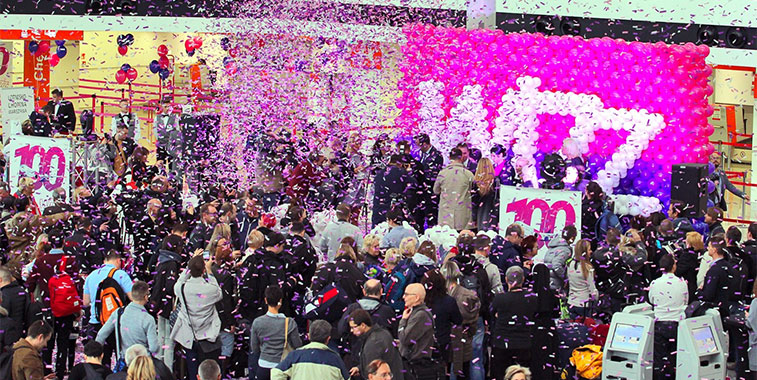