Côte d’Ivoire’s Abidjan Airport is one of three on the African continent to see regular A380 services; Ghana #1 country market 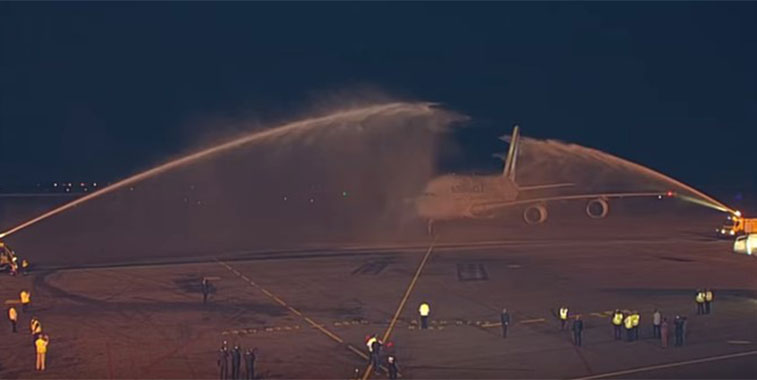 In February 2014, Air France operated a one-off A380 flight on its daily 777-300 service between Paris CDG and Abidjan in Côte d’Ivoire, with the African airport welcoming this flight with a traditional water arch salute. Later that year, the SkyTeam member began to use the A380 on three of its seven weekly services to Abidjan from the French capital, allowing Air France to confirm its position as Côte d’Ivoire’s number one international carrier.

Nestled in West Africa, Côte d’Ivoire (Ivory Coast) is a country which borders Liberia, Guinea, Mali, Burkina Faso and Ghana. Gaining independence from France in 1960, the nation is home to approximately 22.6 million people according to the nation’s latest census, making it the 56th largest population in the world. Despite Yamoussoukro being the country’s capital, it is Abidjan which is home to the nation’s largest urban population, at around 7.6 million people. Therefore with such a large population, it is of no surprise that air connectivity is very important for this growing economy. Abidjan Airport is the nation’s largest, and it is one of only three airports on the African continent to see regular A380 operations. Air France operates the aircraft type on three of its seven weekly services from Paris CDG, while the other two airports in Africa to see regular A380 services are Johannesburg (Air France, British Airways, Emirates, Lufthansa) and Mauritius (Emirates). 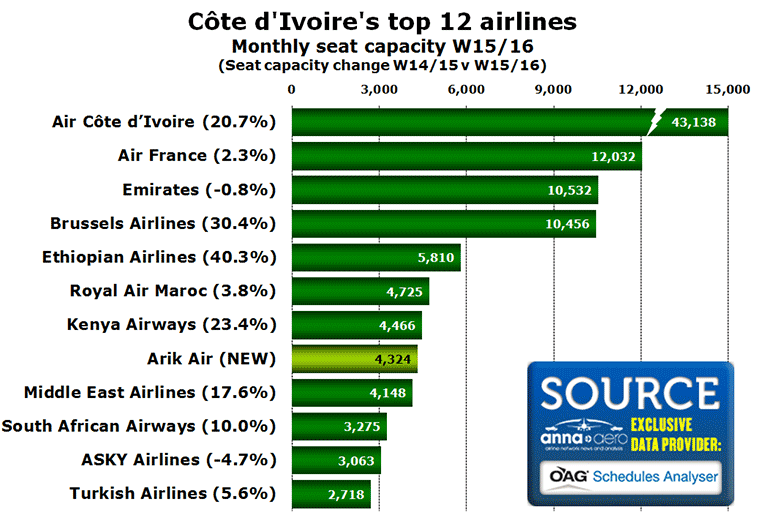 After recording annual growth in seat capacity of nearly 21%, national carrier Air Côte d’Ivoire remains the country’s largest this November. According to planespotters.net, Air Côte d’Ivoire’s fleet currently consists of three A319s, one A320 and two Q400s. Established in May 2012, the airline succeeded Air Ivoire which was the national carrier until its bankruptcy in 2011. In total, Air Côte d’Ivoire currently serves 23 destinations across Africa from its Abidjan hub according to the airline’s online schedule. After recording an increase of 2.3% in seat capacity, and operating regular A380 services for 12 months to Abidjan from its Paris CDG hub, Air France remains the nation’s number one international carrier. Arik Air (highlighted in light green) is the latest addition to the list of carriers to serve Côte d’Ivoire, after inaugurating services to Abidjan from Lagos on 16 February. Since launching, the airline has become the eighth largest to serve Côte d’Ivoire this winter season. Outside of the top 12, Tunisair (13th biggest carrier) is down 42% in seat capacity, while Air Algérie (15th) is recording a growth of 7.7%. 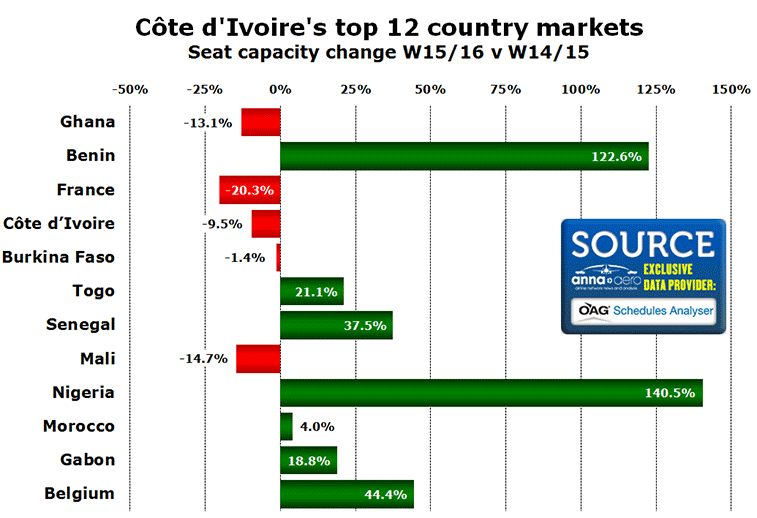 Although the country market between Côte d’Ivoire and Ghana is only served by one route, Abidjan – Accra, it is the largest one from the nation. Despite being the only route between the two countries, it is served in total by six carriers which are Emirates (53% of seats), South African Airways (16%), Air Cote d’Ivoire (15%), Middle East Airlines (11%), EGYPTAIR (4%) and Air Burkina (2%). Although it is the number one market, it’s November 2015 result is still down just over 13% in overall seat capacity when compared to the same period analysed in 2014. Outside of the top 12, Cameroon and Turkey (13th and 14th largest markets) are both showing rises in seat capacity of 29% and 5.6% respectively. While the Benin and Nigeria markets have doubled in size over the past 12 months, at the other end of the spectrum the country market of Mali, which is the eighth largest, is recording the biggest decrease in capacity of any other in the top 12 at over 14%. In relation to physical volume of seats however, it is France which is showing the biggest decrease at over 3,000. This is a result of Corsair reducing the seasonal operation period of its route to Abidjan from Paris Orly, and is also despite Air France’s 2.3% increase in capacity.

The fourth largest country market from Côte d’Ivoire is its domestic market which when compared to the same period of last year is down by just over 900 seats. The market is only served by one airlines which is the national carrier, Air Cote d’Ivoire. In total seven domestic routes operate within the African country. According to OAG Schedules Analyser data, five of the routes connect Abidjan to the country’s remaining airports, while the remaining two connect Bouake and Korhogo as well as Odienné and Man. 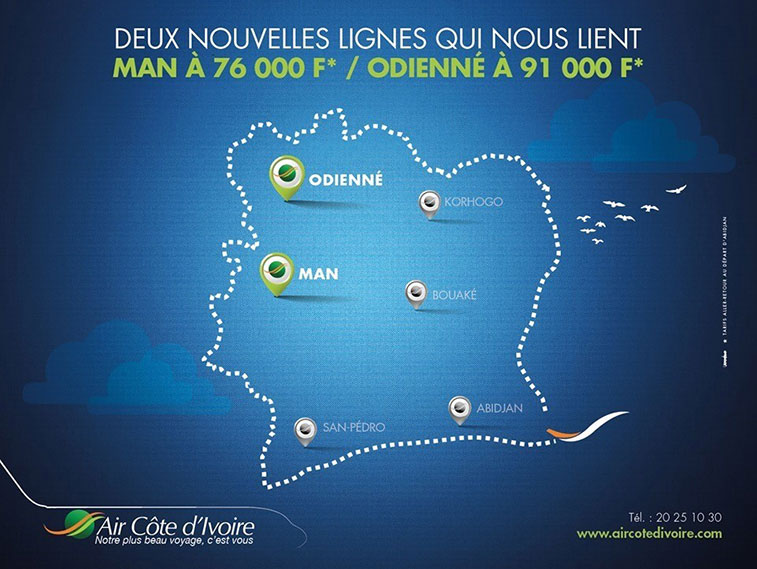 Air Côte d’Ivoire is the only carrier to serve Côte d’Ivoire’s domestic market. According to OAG Schedules Analyser data, the airline has a total of seven domestic routes, five of which connect Abidjan to the country’s remaining airports as well as between Bouake and Korhogo, and Odienné and Man.