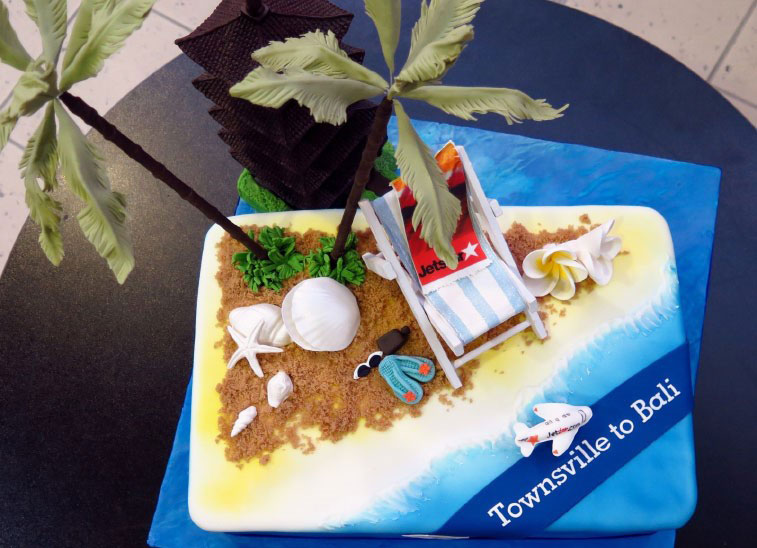 2 September: Jetstar Airways helps Townsville Airport make its own little piece of history, with the launch of the Australian regional airport’s first international service to Denpasar in Bali, Indonesia. Despite this landmark service, passenger volumes at the airport are expected to remain relatively unchanged in 2015.

First of all a brief geography lesson. Townsville is in Queensland, Australia, less than 300 kilometres south-east of Cairns and over 1,100 kilometres north-west of the state capital Brisbane and boasts a population of around 200,000 (more than Bern, which is the capital of Switzerland!). Townsville Airport has been Australia’s 11th biggest airport since 2001, when it overtook Alice Springs in terms of ranking. However, in 1995 it was as high as sixth in terms of the largest airports in the country. Just to keep things tidy, the Queensland airport recently became the 11th airport in Australia to offer international services (according to OAG schedules) on 2 September – joining the likes of Adelaide, Brisbane, Cairns, Darwin, Sunshine Coast, Melbourne, Gold Coast, Perth, Port Hedland and Sydney ‒ as Jetstar Airways launched thrice-weekly services to Bali. 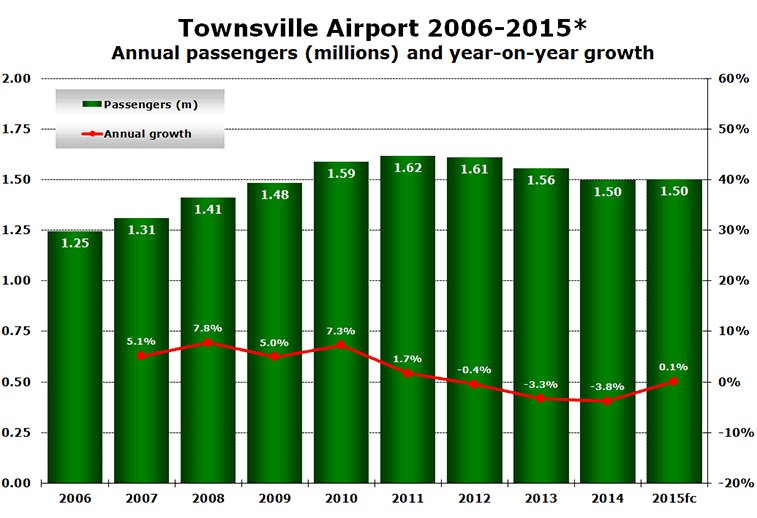 So far during 2015 – derived from monthly traffic figures available until end-August and using anna.aero’s Rest of the World Airport Traffic trends database ‒ the airport has been pretty flat year-on-year, with an average marginal monthly decline in passenger numbers of 0.1% across those eight months. To put this result into context, Australia’s 46 main airports (airports with more than 100,000 annual passengers) on which anna.aero gathers monthly passenger data, are showing a combined average monthly growth across the same period of 0.9%. On this basis, anna.aero forecasts that 2015 annual traffic for Townsville will be around the same as in 2014, at approximately 1.5 million, which is still down on the 2011 high of 1.62 million.

Entering Townsville’s monthly passenger data for 2014 into anna.aero’s Seasonal Variation in Demand (SVID) calculator, the airport performs very well, generating a score of 0.99 ‒ an ‘Excellent’ rating. The airport ranks 18th out of the 76 airports analysed so far in 2015, lying between Sacremento (0.98) and Guadalajara (1.09). As the airport’s monthly figures have remained virtually unchanged year-on-year, it is unlikely that its seasonality performance will drastically change in 2015 and its traffic profile will continue to not give its operations department any major headaches.

In order to gain a thorough understanding of Townsville’s seasonality, anna.aero’s data elves also ran a comparison with two neighbouring airports, Cairns (1.46 ‒ Excellent) and Proserpine (2.00 – Excellent). From this, we can see that these close-by airports (both are less than 300 kilometres away – nothing in Australian terms) have a more pronounced seasonality, which may be explained by the fact that both are currently growing faster than Townsville (looking at 2015 monthly figures so far). For all three airports, the quietest month of the year is February, with July being the busiest month for Townsville and Cairns (September at Proserpine).

Looking at weekly seats for this year (week commencing 27 November) versus the same period in 2014, the airport’s overall capacity has risen by 8.8%. This is due in part to two new airlines (highlighted in light green) entering the Townsville market in the last 12 months, both of which are Australian regional airlines – Hinterland Aviation and JETGO Australia. While the former offers services to Palm Island 36 times weekly with its fleet of Cessnas, the latter operates a thrice-weekly route with its 37-seat ERJ 135s to Rockhampton. 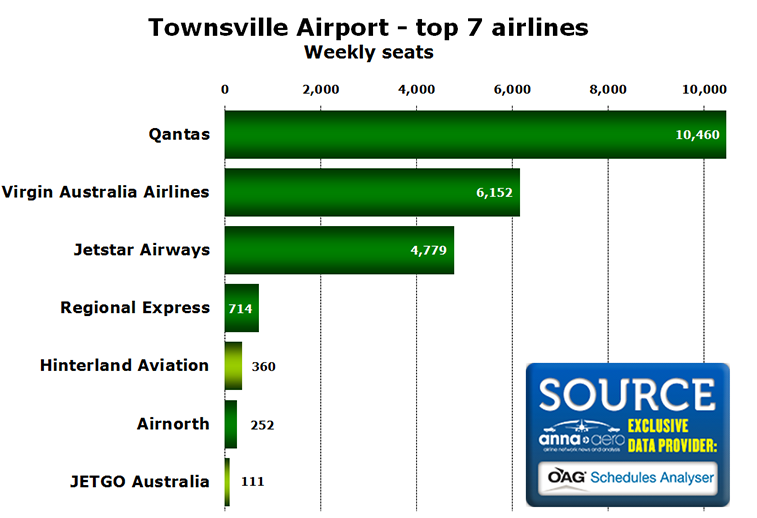 Qantas remains the #1 carrier at the airport, despite a marginal tweaking of its weekly seats (-0.3%). However, its share of this growing market place has been reduced to 46% from the 50% recorded last November. Even on a group basis, including the figures of in-house LCC Jetstar Airways, its overall share has fallen one point from 68% to 67%. This result comes regardless of its daughter company growing its commitment at Townsville by 26% year-on-year. Meanwhile #2 carrier Virgin Australia Airlines, has been doing some fine-tuning of its own, with its weekly capacity down 1.3% since last November.

Unsurprisingly, service to the state capital is the most vital air link offered from Townsville. The 1,110-kilometre city pair has witnessed its weekly capacity rise by 3.3% over the last 12 months, although the fellow Queensland city of Cairns is showing a more robust annual seat growth of 20%. The fastest growing spot is reserved for Darwin, which has exhibited an annual increase in capacity of 66% year-on year (albeit from a low base), thanks to Airnorth adding a third weekly F100 service to the twice-weekly E170 operation of November 2014. The airport’s overall route count is up from 10 last year to 13 in 2015, with Denpasar, Townsville’s only international service (highlighted in light green), Palm Island and Rockhampton being added in the last 12 months. 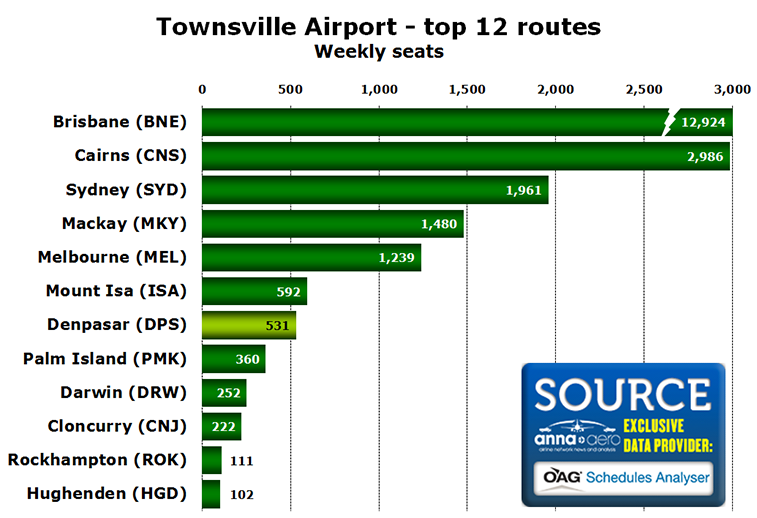 Routes to Mount Isa (-23%) and Sydney (-8%) are the only two services with negatives in their respective capacity columns. Although there is currently no route development on the horizon for Townsville, according to anna.aero’s New Route Database, presumably the airport will be pursuing international growth, most likely to New Zealand, to follow-up on the recent success of gaining its first international service to Denpasar in Indonesia. 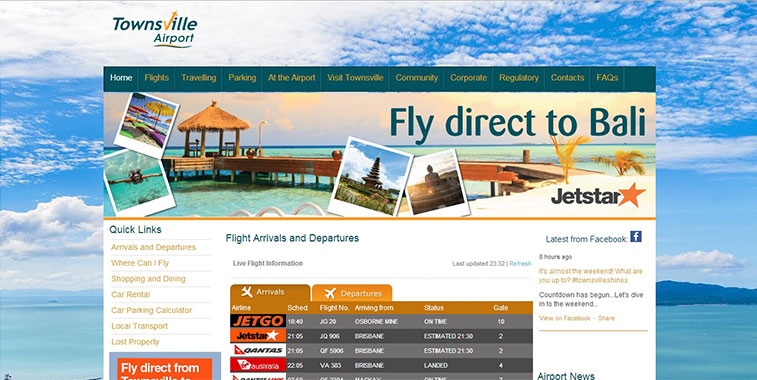 Thanks to these new flights to Bali, anna.aero’s data elves fully expect the Queensland airport to add the word ‘International’ between Townsville and Airport in due course.