anna.aero meets with airBaltic as it celebrates 20 years in the air 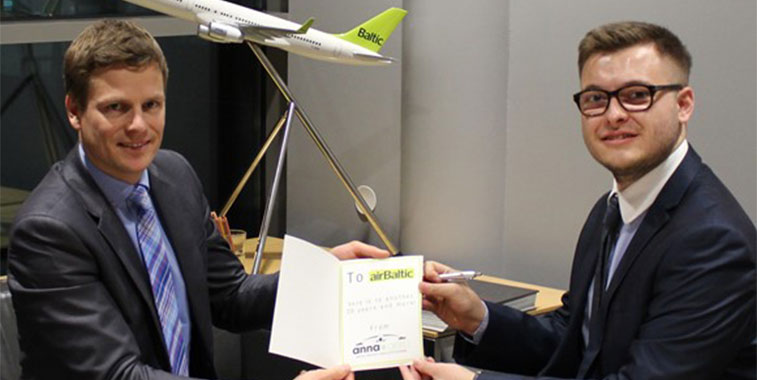 The two ‘pen-pals’. Not realising that they both had pens in their hands, airBaltic’s VP of Corporate Communications, Janis Vanags, is delighted to accept the airline’s 20th birthday card from anna.aero’s Assistant Editor, Jonathan Ford, during their meeting in the business lounge of Riga Airport. For those who are unable to read the caption, it goes as follows: ‘To airBaltic, here is to another 20 years and more, from anna.aero’.

On 30 November, anna.aero’s Jonathan Ford met up with airBaltic’s VP of Corporate Communications, Janis Vanags, at their main base of Riga Airport. On the agenda in their meeting was the discussion of how now was a ‘major turning point for business development’ as described by Vanags. airBaltic was established on 28 August 1995 as part of a joint venture between SAS and the Latvian State with the first maiden commercial flight following on 1 October of the same year. airBaltic continued to have a strong relationship with SAS, which owned just over 47% of the company until January 2009, when the Star Alliance member sold its stake in the carrier. As of November 2015, the airline’s fleet is made up of 24 aircraft which is broken down into seven 737-300s, five 737-500s and 12 Q400s.

During anna.aero’s meeting with Vanags, one of the key topics of discussion was the development of connectivity to the Baltics. In May of this year, Lithuania’s then national airline Air Lituanica filed for bankruptcy, while Estonia’s flag carrier Estonian Air recently closed down at the end of October. The result means that airBaltic is now the main airline of the Baltic region. “We are now the only local airline in Lithuania and Estonia” explains Vanags. “Strengthening connectivity in the Baltic regions is very important to us. We would like to develop more point-to-point links on important markets from Tallinn and Vilnius at a respectable frequency unlike the current low-cost airlines that serve both these airports.” 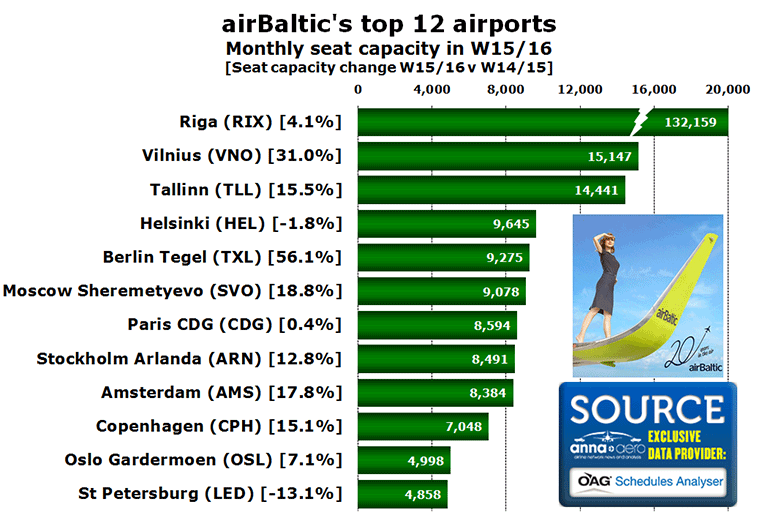 As shown in the table above, Vilnius Airport is the fastest growing of the Baltic airports served by airBaltic, with Berlin Tegel growing the most in the past 12 months. Since Air Lituanica’s closure in May, airBaltic has added links from Vilnius to Paris CDG, Amsterdam, Brussels and Berlin as well as serving Riga, Stockholm and Helsinki. “If Lithuanians fly, we will fly” exclaimed Vanags. “Regional connectivity is vital. Just because Air Lituanica closed doesn’t mean that Lithuanians are not flying. It was due to the business model that the airline sadly closed.” This is also a reason why airBaltic is the supportive carrier of next year’s CONNECT conference which is being held in Vilnius during March 2016, as Vanags explained that airBaltic is now the only carrier from the Baltic region based in the city.

One problem that Vanags described to anna.aero was that the Baltics are a very niche market. “We see that airlines such as British Airways and Air France are flying to this region, but they’re not using their own metal. They are using airBaltic metal as the market is too thin for multiple carriers.” airBaltic has a unique strategy in having code-share agreements with multiple carriers from various alliances such as Brussels Airlines and Aegean Airlines in Star Alliance; Air France, KLM and Czech Airlines in SkyTeam; and British Airways in oneworld. When Ford asked why airBaltic was not part of an alliance, Vanags replied: “The reason we are not part of an alliance is due to our unique strategy and strong partnerships. If we became part of an alliance for example Star Alliance, we would lose the business links with airlines such as Air France.” 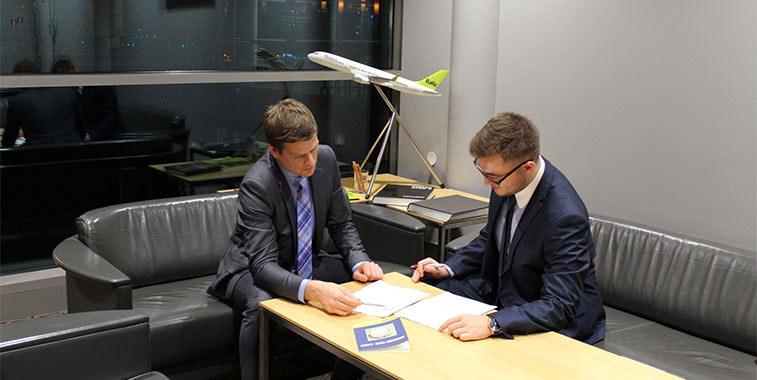 Serious discussion. Vanags explains to Ford through the art of visual aids the importance of the hub and spoke system that helps to define airBaltic’s developing strategy which is to create a trio of hubs at Riga, Vilnius and Tallinn.

As already stated, airBaltic is now the only local carrier in Lithuania and Estonia as well as Latvia, which is a great chance for the airline to develop these markets. “What we would like to do is introduce a trio of hubs to this region” explains Vanags. “We currently have our major hub here in Riga, and we’ve recently established larger operations at Vilnius and Tallinn as a direct result of other airline failures. What we would like to develop is a model in which there are great connections between the three bases, but to increase more point-to-point routes from our new larger operations in the Lithuanian and Estonian capitals. What we need to consider though is that we need to have great frequencies for the passengers.” Vanags explained in more detail further that low-cost airlines only have a few weekly flights on certain routes into the region. However, airBaltic would like to implement at least daily frequencies on new routes it would introduce. “It’s very good to have strong connections which is part of our main strategy here at Riga for people changing planes. However, if they are of a limited availability, it makes them invalid as passengers will only have limited options throughout the week. We have a hybrid strategy, so yes we are low-cost in terms of our ticket prices, but still as an airline we need to give to the passengers what they want which is more than just a low-cost ticket but a premium service with excellent connections at flexible times.”

This week, airBaltic has confirmed that it will receive €80 million of government funding and an extra €52 million from a private investor allowing them to invest in newer aircraft and to grow the business. For the past three years, airBaltic has been profitable with 2014 allowing them to make a turnover of €300 million. From next year, the carrier will welcome the first of 13 Bombardier CS300s with the aircraft being used to replace the airline’s current fleet of B737s. Commenting on the new fleet, Vanags told anna.aero: “I just love this aircraft. Last week we welcomed the aircraft to Riga for the first time and I personally cannot wait for it to join the fleet. It’s one of the most fuel efficient planes in the world and not only will it help us to reduce our emissions as a carrier, but it will also extend the range of destinations which we can serve direct from the region, including the Canary Islands and even into the Middle East with routes such as Abu Dhabi and Muscat. We can also develop links into the CIS countries where business trade links with the Baltic states are booming.” Asking about how these routes could work from a niche market like Riga as an example, Vanags replied: “We can start thinking about potential links with new carriers which are based in the regions. For airBaltic it’s all about co-operation.”

Fending off the LCC boom….

One noticeable difference over the past few years in the Baltic region is the LCC boom which has occurred, as confirmed by Ford as he glanced out of the business class lounge window at Riga Airport over the multiple Ryanair and Wizz Air aircraft while writing up this article. Vanags commented on this trend during his meeting with anna.aero by explaining: “Since the countries within this region joined the EU, the LCC market has most certainly helped to grow passenger traffic and with their low fares we have had to change our business model in order to keep up with them. That is why we are now a hybrid carrier and not just a full-service one. Over the past 10 years we have lowered our fares but have also developed a schedule that works both for the low-cost but also the business market. As the GDP in this region grows we expect aviation to continue to grow strongly. Our passenger to population ratio is much higher than other airports in Eastern Europe so with that we expect LCCs to continue to grow as they notice the demand in this region. So by introducing fuel saving aircraft into the fleet we are able to keep our costs low in order to compete with them.”

From 26 December, airBaltic will commence new routes from Riga to Verona and Salzburg, while on 26 March it will open routes from Tallinn to Amsterdam and Stockholm Bromma in time for the start of the summer season. When anna.aero asked about the new routes from Riga and why they were chosen, Vanags replied: “We are starting to see a growing trend from this region in skiing holidays. However, all of the tickets on these routes will not be sold by airBaltic. Some of them have been purchased by tour operators to sell as packages. Again this shows that we are a hybrid airline. We are not only in partnerships with other airlines, but also with travel operators. Working in these types of partnerships on certain routes is the key in order to make them work. It’s not just about one player.”

Seasons greetings from airBaltic and CONNECT 2015 delegates. On 2 December, anna.aero’s Assistant Editor Jonathan Ford was on a flight between Vilnius and Riga when he came across the December issue of airBaltic’s inflight magazine. A message from Martin Alexander Gauss, airBaltic’s CEO, confirmed the new strategy of the airline which is to fly new direct routes out of the Baltic cities as well as further improving existing connections. Also in the magazines were seasonal greetings from Jasper Spruit, VP of Traffic Development, Oslo Airport; Andris Liepinš, Director of the Board, Riga Airport; Jūratė Baltrušaitytė, CCO of Lithuanian Airports; Alexander Schroll, Traffic Development Director, Munich Airport; and Eero Pärgmäe, CCO of Tallinn Airport.