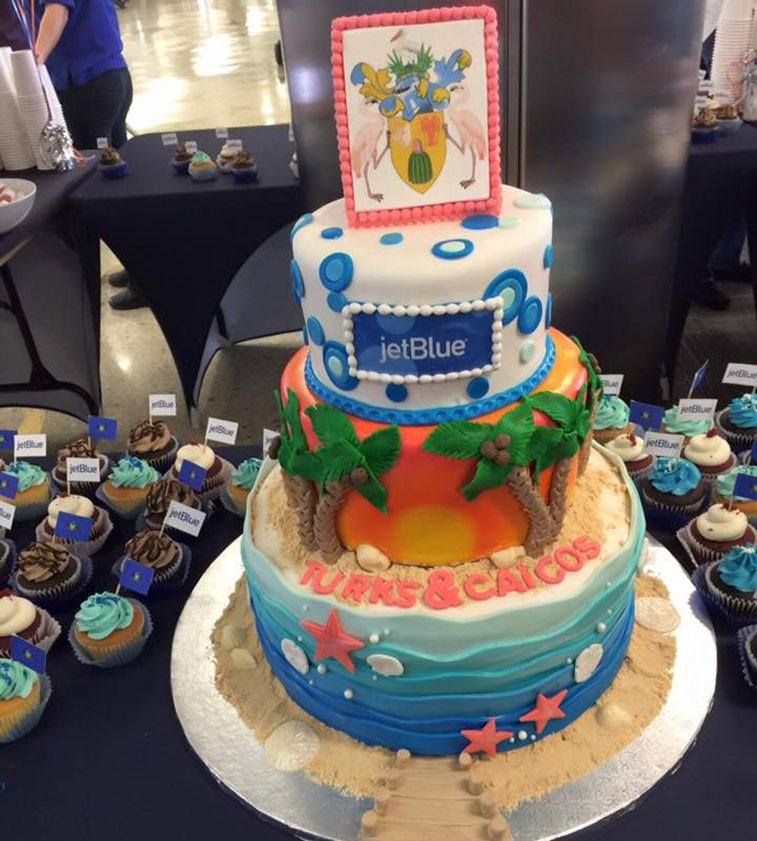 Providenciales Airport in the Turks and Caicos Islands celebrated the arrival of JetBlue Airways’ inaugural service from Fort Lauderdale on 19 November with this impressive culinary masterpiece. Seats to the Caribbean hot-spot from the US are up 13% year-on-year, while JetBlue Airways’ capacity to the region is up around 4% this year.

With the start of Norwegian’s new services from Baltimore/Washington, Boston and New York JFK to Fort-de-France in Martinique and Pointe-a-Pitre in Guadeloupe later this week, anna.aero’s data elves thought it would be a good time to look into the US-Caribbean market again, which was last reviewed three years ago. What hasn’t changed over those three years is the fact that most non-stop services to the islands of the Caribbean either originate down the eastern seaboard or central time zone of the US, and from just 26 airports in the W15/16 season. However, since last year, four more airports have joined the list of those now able to offer escape to its catchment population – namely Houston Hobby, Southwest Florida, Cincinnati and Camp Springs. The last one of those airports listed is a data anomaly for the week in question, and it should be also explained that Camp Springs is the civilian name for Andrews Air Force base – home of Air Force One. United Airlines operated a one-off flight from here to Guantanamo in Cuba (NBW) on 5 December and was therefore included in this analysis. 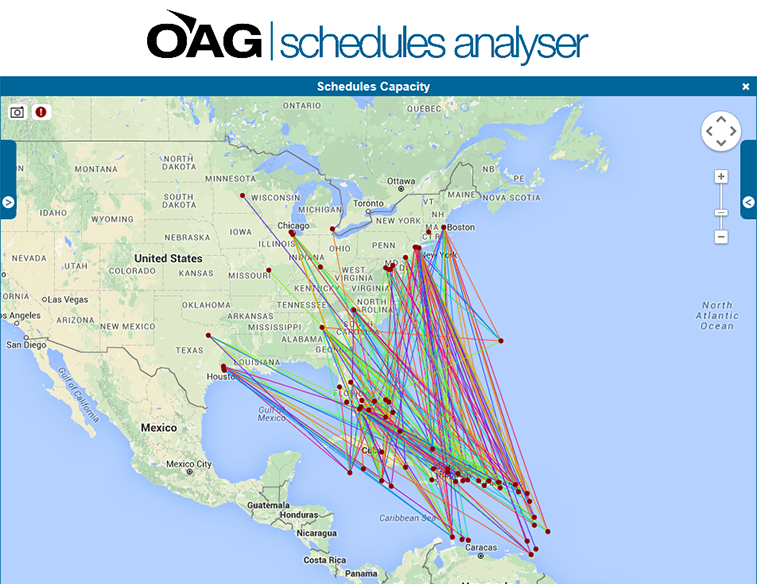 Pretty map. However, it’s pretty hard to get to the Caribbean despite there being over 300,000 weekly seats from the US, as only 16 US states offer non-stop services to the Caribbean this December, when looking at OAG schedule data for this week. California will be added to this map next month when American Airlines starts its Los Angeles to Montego Bay service on 18 December.

The top three US airports in the Caribbean market remain unchanged year-on-year in terms of their respective positions, with New York JFK (23.7% of seats), Miami (23.4%) and Fort Lauderdale (10%) claiming the first three spots again. Their cumulative share of the capacity has fallen however, from 60% of seats to 58% this December. JFK has witnessed an annual fall in weekly seats of 1.4% since last December, with Miami up 1.0% and Fort Lauderdale down 4.4%.

The total capacity offered between the US and the Caribbean has increased 2.5% since last December. In 2015 there are 24 airlines flying between the US and Caribbean, this compares to 22 in the same week of 2014. While US Airways has been subsumed into American Airlines in terms of airlines listed in 2014, the market has seen the arrival Norwegian, Aruba Airlines and Sunwing Airlines in the last 12 months. In 2014, the top eight airlines commanded 96% of weekly capacity, this has dropped in December 2015 to 95%. 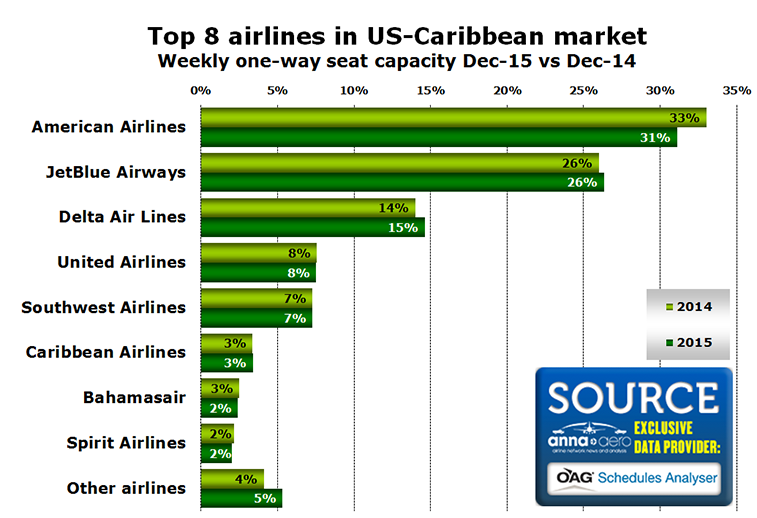 The #1 carrier in the market, American, has cut its capacity (-3.5%) year-on-year. However, this probably has more to do with the fact that US Airways’ weekly seats have been added to its total, and the merger has allowed the carrier to trim any excess fat off the combined Caribbean schedule. For a carrier that is seemingly expanding its capacity rapidly elsewhere, Spirit Airlines has actually reduced its commitment to the market by 5.3%, making it the worst offending carrier in terms of capacity culling. Top of the class meanwhile is Delta Air Lines, which has added 7.2% more seats over the last 12 months, resulting in it improving its market share by 0.6%.

The top 12 country markets in the Caribbean from the US constituted 93% of weekly seats in 2015, a fall of 1% from a year ago. That said, the top 12, and their respective positions, have all gone unchanged in the last 12 months. The number of country markets has been expanded from 21 in December 2014 to 22 this year, with Cuba being the new entrant. Given the vast social, economic and political ties between the two nations, and the recent relaxing of travel restrictions, this country pair will undoubtedly be a significant player in the years to come, perhaps breaking into the top 12. 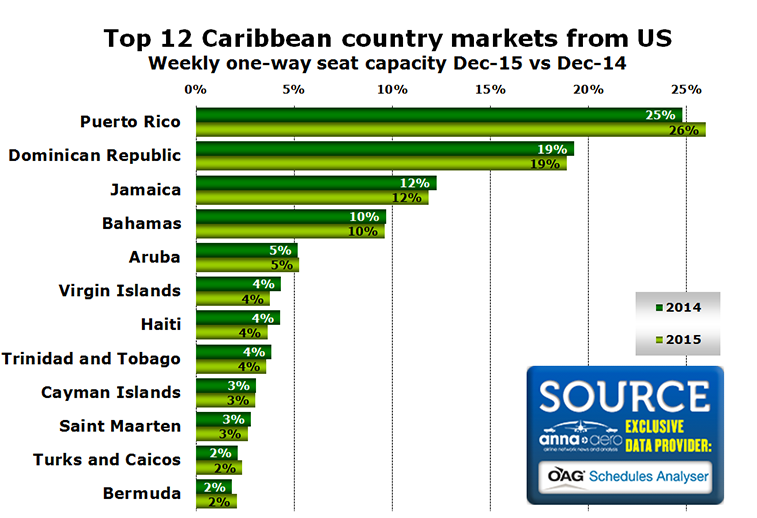 The star-performing market is that of Bermuda, which has shown an annual increase of 16% in terms of weekly seats, beating the 13% rise in capacity experienced to the Turks and Caicos Islands. Double figures have also been noted in the Virgin Islands and Haiti markets, this time negative ones, with the two countries serving up capacity declines of 11% and 13% respectively.

In terms of new routes still to be added this winter between the US and the Caribbean, there is plenty of activity to come, according to anna.aero’s New Route Database: