Transavia to open Munich base next March with four 737-800s; Lufthansa to compete on 14 of 16 new routes planned 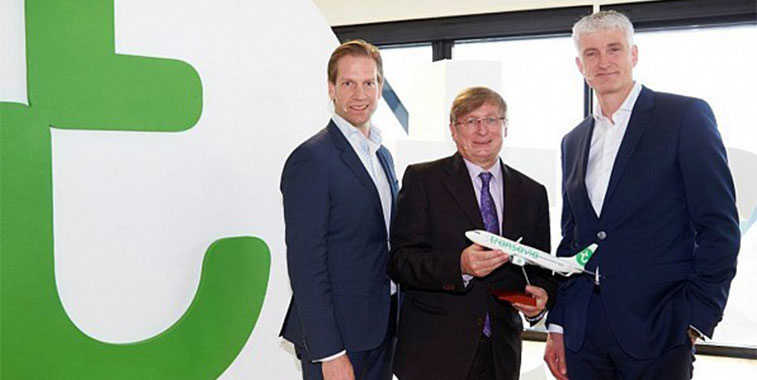 Roy Scheerder, CCO, Transavia; Michael Kerkloh, President and CEO, Munich Airport and Mattijs ten Brink, CEO, Transavia celebrate the news that the airline will open its seventh base, and its first outside of its home markets of France and the Netherlands, at the southern German hub. Starting with two aircraft in March and increasing to four aircraft by the end of May, Transavia becomes the first LCC to open a base at Munich.

Transavia will open its first base outside of its home markets of Netherlands and France (the airline is a wholly-owned low-cost subsidiary of the Air France-KLM Group) next March, with Munich chosen as its first international foray and its seventh base in total. Initially basing four 737-800s at the airport (two arriving in March and two in May), the airline will add 16 routes to the one already flown to the German hub from its base in Paris Orly (a daily service which began on 4 September) and the 12 times weekly service from its Eindhoven base, which was previously announced and will begin on 19 February. The LCC’s remaining four bases are in Amsterdam, Rotterdam, Lyon and Nantes.

The airline’s Munich-based operations will cover destinations across seven European and North African countries, with Italy initially boasting the lion’s share of routes with seven city pairs on offer.

Based on the above schedule the first two based aircraft will be pretty busy, sharing 42 weekly frequencies (21 flights each, three flights per day) across 10 of the 16 new destinations. An additional 36 weekly frequencies, including extra frequencies on those routes started in March, will be provided by the second two aircraft from late May. The schedules of the first two aircraft will be as follows, based on the first week of full flying, with departures from Munich in four discernible banks:

There are still some gaps for additional services within this flying schedule, particularly shorter sectors to northern Italy for example. However, the airline may wish to maintain some flexibility in its programme, to recover from any operational difficulties, particularly in the initial phase of the base opening as the LCC’s reputation will be made or broken in those first few weeks in a new market.

Lufthansa and friends to feel the brunt

Unsurprisingly, the airline which will feel the most pain at the arrival of Transavia is home-based carrier Lufthansa, which will compete on 11 routes head-to-head with the LCC. Add in the three Italian routes operated by its wholly-owned subsidiary Air Dolomiti, and it will compete on 14 out of the 16 new routes. When looking at the week in question next April, the first full week of its based operations, only one route to be served by Transavia is currently unserved – Porto.

The densest route in terms of competition is to Brussels, which Lufthansa serves 46 times weekly, but the Star Alliance carrier is currently the only airline on the route – so ripe for some LCC competition. It is also the route that Transavia plans to offer the most weekly flights on in this first wave of flights – with a 12 times weekly service from day one. In terms of the number of competitors, the route to Palma is the most competitive, with five incumbents already in place before Transavia’s arrival into the market.

Michael Kerkloh, President and CEO of Munich Airport, is very pleased with the base news. “With 89 weekly flights to 18 destinations in nine countries, Transavia offers a broad and manifold choice of new connections from Munich. This increases the travel options for passengers and makes our airport even more attractive.”

Mattijs ten Brink, CEO of Transavia, explains the rationale for the decision, “I’m proud to have the opportunity to officially announce our arrival at Munich Airport today. This is proof that we are delivering on our promises. In January, we announced our ambition to be the leading low-cost airline in Europe, with growth both within the Netherlands and outside of our home market. Today, we are taking an important step towards achieving that ambition. There is broad support for this plan within both the AIR FRANCE KLM Group and the KLM Group. The Munich base will be managed from the Netherlands and the flights will be operated under Transavia’s Dutch AOC (Air Operator Certificate).” The start of bigger things to come. On 4 September Transavia started a daily flight from Paris Orly to Munich. The French route will be joined by an Eindhoven service on 19 February, and then by  further 16 routes from March 2016 onwards to destinations in Belgium, Croatia, Denmark, Italy, Morocco, Portugal and Spain.