Las Vegas Airport is having a bumper year as it sees 1.8 million extra passengers for the first 10 months; Norwegian latest carrier On 1 December, Virgin America launched a 12 times weekly service between Las Vegas and Dallas Love Field, bringing to five the total number of routes the carrier serves from the Nevada hub. Since the start of W15/16, Las Vegas has welcomed the arrival of Norwegian’s inaugural services from Copenhagen and Stockholm Arlanda, Spirit Airlines has launched services from New Orleans, while Southwest Airlines has incorporated a daily link to Akron/Canton into its busy schedule. WestJet, Allegiant Air and Frontier Airlines have also added a wealth of routes from the city this summer.

It’s Vegas baby! Lying in Nevada, Las Vegas is a city filled with wealth and prosperity as well as sins and seduction. Whichever way you look at it though, it’s a fascinating city which in October 2015 attracted 3,784,056 visitors, up 5.6% when compared to the same month of 2014 according to the Las Vegas Conventions and Visitors Authority. During the 12 months of 1970 Las Vegas welcomed 6.8 million visitors, whereas last year it welcomed just over 41 million. For a city which has an urban population of just over one million, the statistics prove just how much the city’s tourism industry has achieved with its popularity and global brand, and why the city’s airport is vital for its prosperity to continue as tourists continue to flock to Sin City. 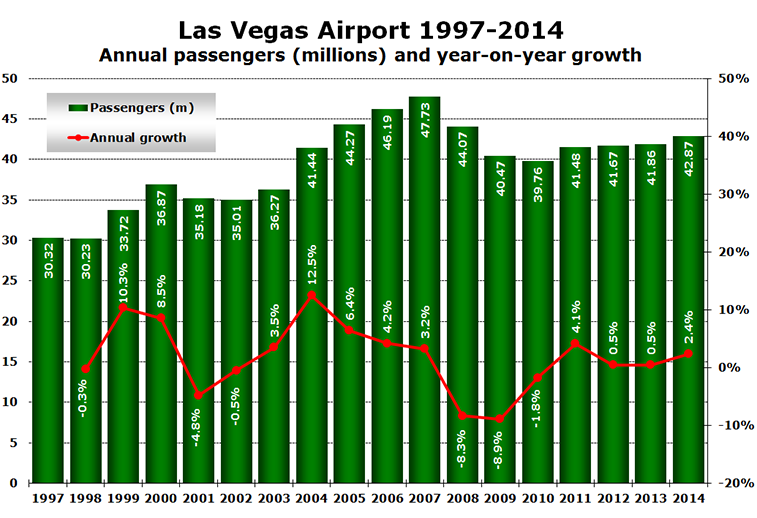 Over the past 18 years, Las Vegas Airport (known locally as McCarran International Airport) has seen two dips in its passenger traffic, which correlate with the 11 September attacks in 2001 and the 2008 financial crisis. In 2008, passenger numbers fell at the facility by 8.3%, while the following year they declined 8.9%. This result meant that within the space of two years traffic fell by 7.2 million passengers. A study by the Brookings Institution and London School of Economics has shown that before the recession, measurements analysed between 1993 and 2007 confirmed that Las Vegas ranked as the 14th hottest economy in the world out of 150 metropolitan areas. After 2008, the city fell to 128th place out of the 150. Although traffic at the airport fell by over seven million between 2007 and 2009, visitor numbers to the city fell by just under three million, meaning that other modes of transport were more financially viable for the key domestic market, which coincidentally is the number one market from Las Vegas. However, for the first 10 months of 2015, passenger traffic at Las Vegas is up by just over 1.8 million when compared to the same period of 2014, with an average monthly increase in traffic of 4.8%. If this trend continues, then Las Vegas should expect to just hit the 45 million passenger mark by year-end. 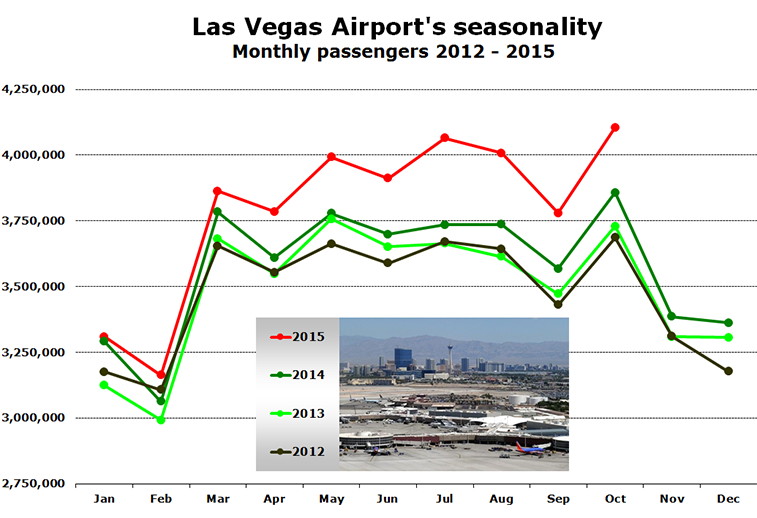 October is the busiest month of the year

Apart from in 2013, October is the busiest month of the year for Las Vegas Airport. Three key factors have contributed to this trend. Firstly, the weather is not so hot at other times of the year that people are diving to find shade, making it a more desirable time of year to visit. Secondly, it’s the busiest month for conventions as the summer holiday period ends. Finally, the airport has seen a wealth of new routes launched for the start of the winter season which are discussed further in the article. What can be seen from the seasonality graph is that 2015 is showing much stronger growth than that seen during previous years. As a result of Las Vegas’ increases during the months either side of the summer season being so much greater than summer itself, it has meant that the growth has not indented too much on the airport’s SVID (Seasonal Variation in Demand) score. Since 2012, the score has increased from 0.45 to 0.51 last year, both of which are still classed as excellent scores as confirmed by anna.aero’s data elves. 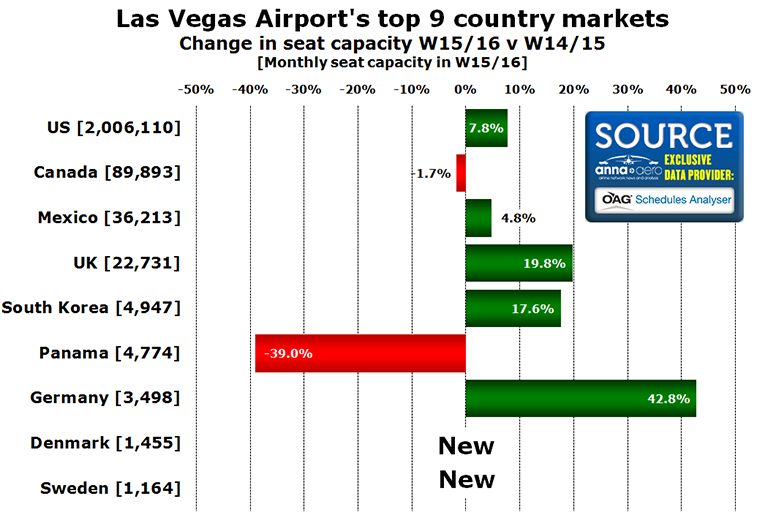 On 31 October, LCC Norwegian commenced its first long-haul services to Las Vegas with the introduction of a weekly service from Stockholm Arlanda. Following the launch came the carrier’s second route to the Nevada facility, this time from Copenhagen on 10 November, a city pair which also operates weekly. These additions mean that Las Vegas has welcomed two new international country markets to its route map for this winter season, up one from 2014. During last winter Edelweiss Air operated a weekly service from Zurich using its A330-300s. However, as the service does not operate this winter it means the loss of Switzerland as a country market. What can also be seen from the table above is the dominance of the US domestic market. Just over 92% of seat capacity out of Las Vegas is on domestic services during W15/16, the same percentage the market held in total seat capacity in W14/15. Overall capacity to Las Vegas is up 7.4% this winter season when compared to the same period of last year, which is equivalent to approximately 160,000 seats. 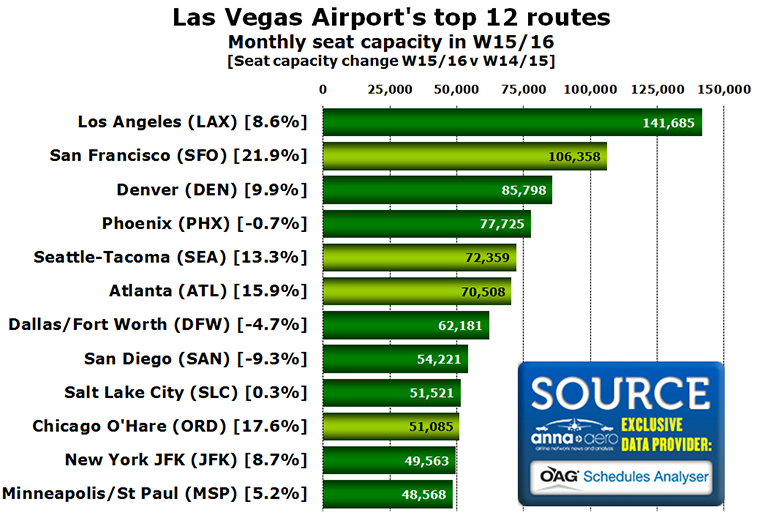 After recording an increase in seat capacity of 8.6% when compared to last winter, Los Angeles remains the number one destination from Las Vegas. Nonetheless, San Francisco has closed the gap on the number one spot by 11,000 seats after recording a growth in capacity just shy of 22%. This is a result of JetBlue Airways commencing a twice-daily service on the city pair on 5 January, while Frontier Airlines commenced a daily service between San Francisco and Las Vegas on 25 October. Miami, Milwaukee and Houston Intercontinental were also launched by Frontier Airlines on the same day as the San Francisco inauguration. As well as JetBlue Airways and Frontier Airlines introducing themselves on the Nevada – California airport pair, Virgin America has also increased its capacity between the two cities by 12%, with United Airlines and Southwest Airlines having also added some seat capacity to their services. Out of the top 12 routes, four (highlighted in light green) have recorded double-digit growth. When comparing the top 12 destinations of W15/16 against W14/15 one airport has disappeared. Oakland, which was 11th last winter has dropped to 14th this winter as a result of seeing seat capacity decline by 1.4%. The airport which has replaced Oakland in the top 12 is Chicago O’Hare, a destination which has seen an increase in seat capacity of nearly 18%. Overall this year has been a very successful year for Las Vegas in relation to route launches, with the table below highlighting some of the routes that have been added this year.

Looking forward to next summer

As well as seeing the return of some long-haul seasonal routes for next summer including Manchester and London Stansted, of which the latter launched earlier this year, one of the biggest additions to Las Vegas’ route map next year is Cologne Bonn. Eurowings will launch services from the German gateway on 4 May, becoming the second destination in Germany for the airport after Frankfurt. As well as the launch of Cologne Bonn, Southwest Airlines will introduce services to New York Newark on 12 April. In addition to these route launches next year, 2017 will see Las Vegas be the setting for Routes Americas. This is the second time Routes has hosted an event in the city, as Las Vegas was the location for the first World Routes to be hosted in the US, which took place during 2013. 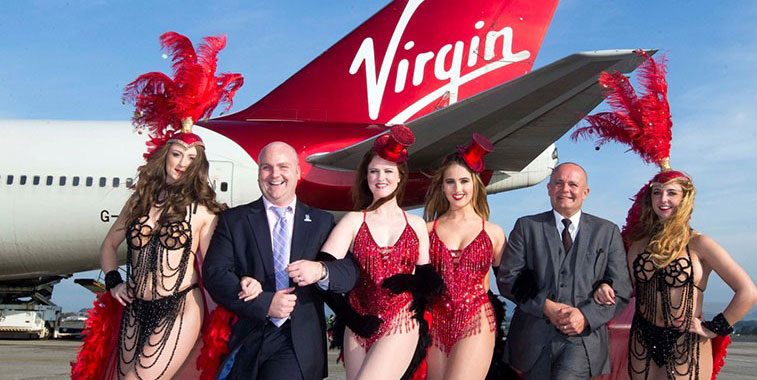 On 10 September, Virgin Atlantic Airways commenced its third service to Las Vegas from Glasgow. The carrier also serves Manchester and London Gatwick. For next year, the airline has confirmed that it will run a longer season on its route to Glasgow after a successful run of flights between September and October.