On 1 December, Copenhagen Airport became the first facility in Scandinavia to welcome regular A380 services as Emirates launched its first ever two-class flight with the type on its route from Dubai. As a result of the MEB3 carrier introducing the aircraft onto its route to the Danish capital, its monthly capacity has grown by 32%.

On 1 December, Denmark followed in the footsteps of the UK, France, Spain, Italy, Germany, Switzerland and Netherlands in becoming the eighth European country to welcome regular A380 services after Emirates commenced daily flights to Copenhagen from its Dubai hub, replacing current 777-300 flights. The heralding of the arrival of the aircraft in Denmark also meant that it became the first market in the world to welcome Emirates’ first two-class A380 which has 58 seats in business and 557 in economy. Thomas Woldbye, Copenhagen Airport’s CEO, commented that the service upgrade was “a milestone” for the airport. Nonetheless, despite the monthly growth of 32% in seats by Emirates, it is not the only airline that is growing in Denmark this winter season as outlined further in this article. However, with highs also come lows, as Ryanair recently closed its based operations from Denmark at Billund and Copenhagen due to disputes with the nation’s unions. 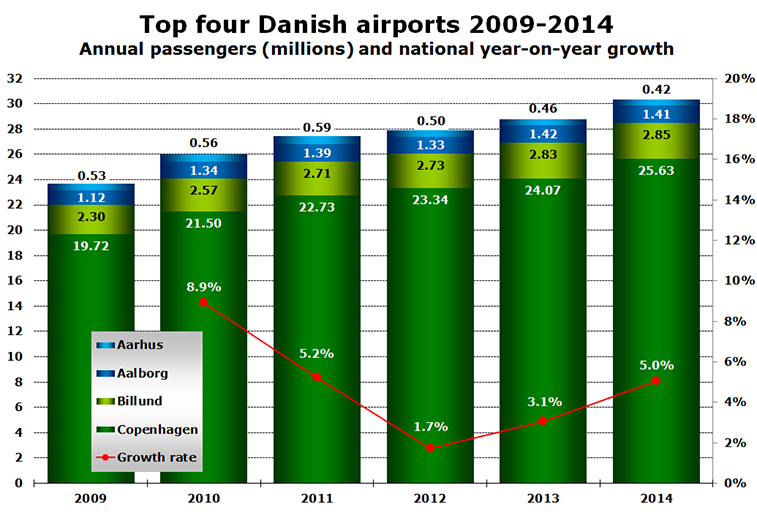 As can be seen from the graph above, Copenhagen commands the show in Denmark in relation to passenger throughput, with the capital city being the gateway to the nation for 85% of Denmark’s overall passengers in 2014, a percentage which has grown from the 82% majority it held back in 2009. What can also be seen is that passenger traffic growth in Denmark is starting to pick up, with the annual rise growing from 1.7% in 2012 to 5.0% last year. Of Denmark’s four major airports, one is not performing to the level in which its fellow airports are. Aarhus, situated some 190-kilometres north-west of Copenhagen Airport, has seen its passenger traffic for the first 10 months of this year fall by nearly 20%, whereas Copenhagen is up 2.4%, Billund is up 2.3% and Aalborg is up 1.7%. Overall for the first 10 months of 2015, passenger traffic within Denmark has grown by just over 4.1 million passengers. As well as these four airports, Denmark also has scheduled passenger operations at Esbjerg, Odense, Bornholm, Karup, Roskilde, Sønderborg and Læsø airports. 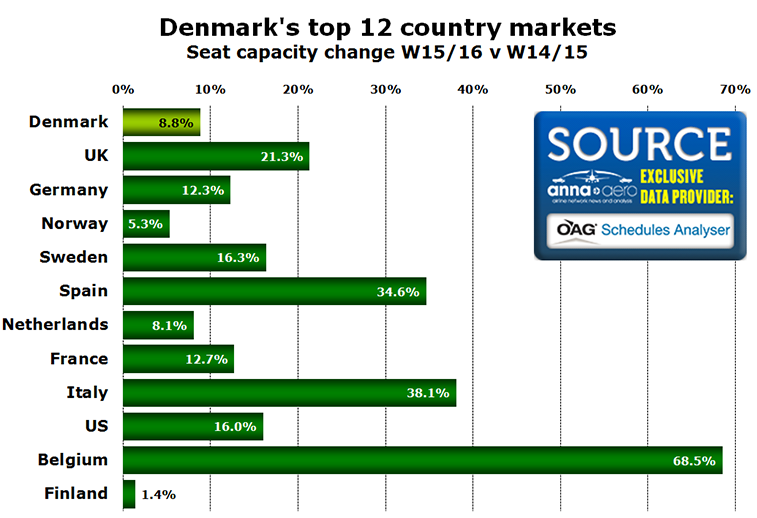 After recording an increase in seat capacity of 8.8%, it is the Danish market (highlighted in light green) which remains number one. This winter, just over 212,000 monthly seats will be on offer within the domestic market on 12 routes according to OAG Schedules Analyser data, with SAS and Norwegian being the two largest carriers in the market. One of the biggest changes however to the top 12 country markets from Denmark is the growth of the UK. The UK, 12 months ago, was the fourth largest country market from Denmark, however a major growth in the LCC competition to London Luton from Copenhagen between Ryanair (route commenced 26 March) and easyJet (launched November 2014) has resulted in an impressive growth of just over 21%. Not only has Luton welcomed growth to the Danish capital from the UK, SAS also commenced a link between Copenhagen and Edinburgh on 29 March. One market which has seen significant growth is Belgium, which is recording a seat capacity increase of nearly 69%. A major factor contributing to this increase is a result of Ryanair launching a double-daily service to Brussels Charleroi from Copenhagen on 25 October. Outside of the top 12, one market which has seen strong growth is Lithuania (16th largest market) after recording an increase in seat capacity of 43%, helped by Wizz Air inaugurating services between Vilnius and Billund on 14 September. 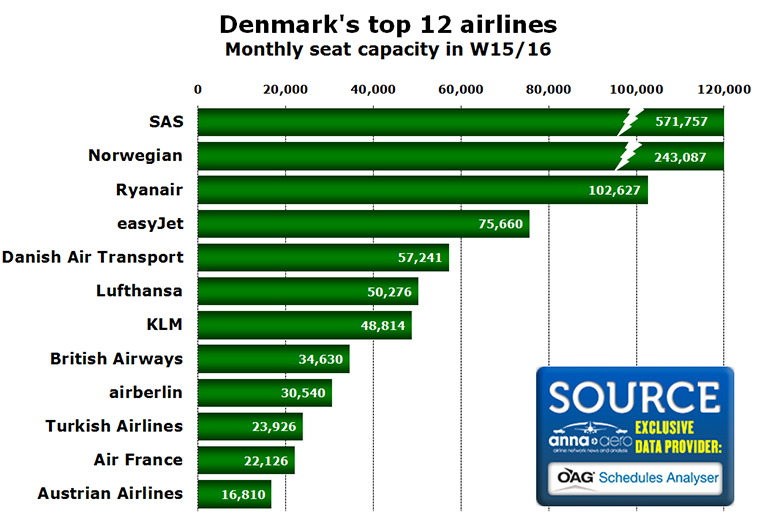 Over the past 12 months, Ryanair has grown its seat capacity from Denmark by 389%. This news follows the very public controversy between Ryanair and Danish unions which resulted in the ULCC ending its based operations from the nation. Commenting about the base closure to anna.aero’s Jonathan Ford at World Routes in Durban earlier this year, Kjeld Zacho Jørgensen, CEO, Billund Airport confirmed that the routes that Ryanair operated were successful services: “Yes we have lost Ryanair, however it is not due to the routes not performing, it’s an external factor. We know that Ryanair saw great success from Billund, so we know that the markets they served are ready for new airlines to take up as the passenger demand is there.” Nonetheless, national carrier to the Scandinavian region, SAS, and LCC Norwegian, remain the top two carriers from Denmark. Although Emirates has grown its seat capacity to Denmark by 32% this month as a result of the introduction of the A380, it’s still behind Turkish Airlines (10th largest carrier) in terms of connectivity to the East and to Africa. One reason is due to the geographical advantages Turkish has in terms of the location of its main hub at Istanbul Atatürk, as the Star Alliance member is able to operate its short-haul fleet into Billund and Aalborg airports as well as Copenhagen. All figures are based on one-way seat capacity.

One of the biggest route announcements for 2016 from Denmark is the arrival of Mahan Air onto the serving airline list. The Iranian carrier will launch services from Tehran to Copenhagen on 3 March. However the biggest route in terms of connectivity for next year will be when British Airways commences services to Billund from London Heathrow on 3 May. The airport will also welcome oneworld member Finnair on 4 April when it launches direct flights to Helsinki, while LCC Wizz Air will add Cluj-Napoca to its Billund portfolio on 23 July, joining its existing services from the Danish facility to Gdansk and Vilnius. The Hungarian airline will also launch its first services to Copenhagen on 22 March when it will introduce a thrice-weekly service from Skopje. The Danish capital will also be one of the first destinations on offer from transavia.com’s new base at Munich. 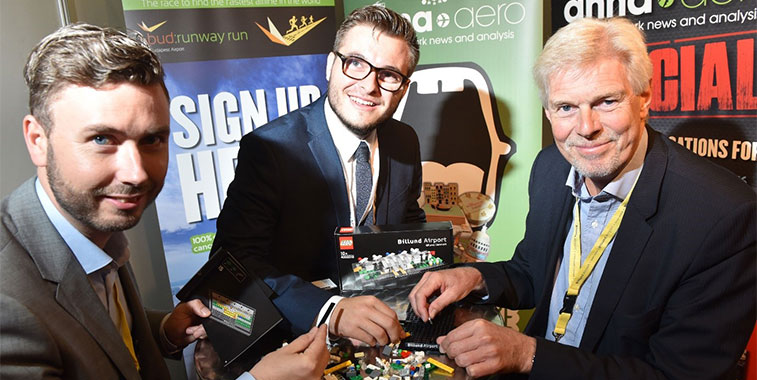 Jesper Klausholm, Head of Airline Relations and Marketing, Billund Airport, directs the dynamic duo of Jonathan Ford, Assistant Editor, anna.aero, and Kjeld Zacho Jørgensen, CEO, Billund Airport, as they attempt to build the Danish facility out of Lego at World Routes in September. Despite losing Ryanair’s base, the Lego is not a metaphor of an airport needing to be rebuilt, as passenger traffic is still climbing despite the closure. The airport will also herald the arrival of British Airways and Finnair next year.