On 3 December, Wizz Air announced the opening of its sixth Romanian base, at Iasi Airport, which will become effective from July 2016. The Hungarian ULCC will commence five new routes from the Romanian airport to Bologna, Catania, Larnaca, Rome Ciampino and Tel Aviv. Besides this, Wizz Air will increase frequencies on the existing services to London Luton and Milan/Bergamo. Marking the achievement are: Victorel Lupu, President, Iasi County Council; György Abrán, CCO, Wizz Air; and Marius Bodea, President, Iasi Airport.

Wizz Air commenced its first flight from Iasi Airport on 16 December 2014, when it began twice-weekly operations on the 1,193-kilometre sector to Venice Treviso. Since then, the Hungarian ULCC added a further two routes, operating twice-weekly to Milan/Bergamo and London Luton from 8 February and 16 September 2015 respectively. However, the Romanian airport’s rapid ascent was furthered on 3 December when the airline announced its sixth Romanian base (#23 overall) at Iasi. As of 16 December 2015, Wizz Air will start operations at its 22nd base at Debrecen, in Hungary.

Wizz Air will open its base at the primary international gateway for the north-eastern part of Romania on 1 July 2016, with a single aircraft deployed at the airport. As a result, the airline’s 180-seat A320 based at Iasi will be operating to five new destinations: three in Italy (Bologna, Catania and Rome Ciampino), one in Cyprus (Larnaca) and one in Israel (Tel Aviv). In fact, Wizz Air is not only adding new routes from Iasi, but is also increasing frequencies on the existing services to Luton (27 March) and Milan/Bergamo (1 July) from twice-weekly to five times weekly and from twice-weekly to thrice-weekly respectively.

Commenting on the opening of the ULCC’s sixth Romanian base, György Abrán, CCO, Wizz Air said: “The first Wizz Air flight took off from Romania in 2007 and over the past eight years, we have earned the trust and loyalty of our Romanian customers. We have constantly expanded our operations in Romania, developed regional airports, and today’s announcement once again underlines our commitment to the country. We put Iasi on the map of aviation a year ago and it will now become the sixth Romanian airport where we establish base operations. The new base will create a number of local jobs with Wizz Air and our local business partners while allowing us to bring more low-fare routes to Romania. We look forward to welcoming our Romanian passengers on board, who and whose visitors can now enjoy our friendly services and low fares on 106 routes to 47 exciting destinations.”

Located in the historical region of Moldova and serving a catchment area of over 3.7 million people, Iasi currently accommodates four carriers, namely Austrian Airlines, Blue Air, TAROM and Wizz Air. Analysis of Wizz Air’s schedule data for week commencing 5 July 2016 indicates that the ULCC will be operating a total of 21 weekly flights from Iasi, with Luton being the most frequently served destination with five weekly flights. With the addition of these new services, Wizz Air will become the second largest operator at Iasi, offering 3,780 weekly seats next July.

A total of 16 deployed aircraft, six bases and eight airports served in Romania

The five new routes launched from Iasi are all existing Wizz Air destinations, being served from the Hungarian ULCC’s other Romanian bases, at Bucharest (seven A320s based), Cluj-Napoca (four A320s), Craiova (one A320), Targu Mures (one A320) and Timisoara (two A320s). Furthermore, Wizz Air is also operating at Sibiu and Constanta airports within the Romanian country market. Overall, with a total of 16 deployed aircraft, six operational bases and eight airports served, Wizz Air will be the uncontested biggest carrier in Romania according to weekly seat capacity for next year. In the first 11 months of 2015, for which traffic data is already available, the airline posted an increase of almost 19% when compared to the corresponding period of 2014, with around 4.2 million passengers handled in the Romanian country market by the end of November. If the airline continues on this growth trajectory, it will achieve close to 4.6 million passengers in this country by the end of this year, based on anna.aero forecasts. 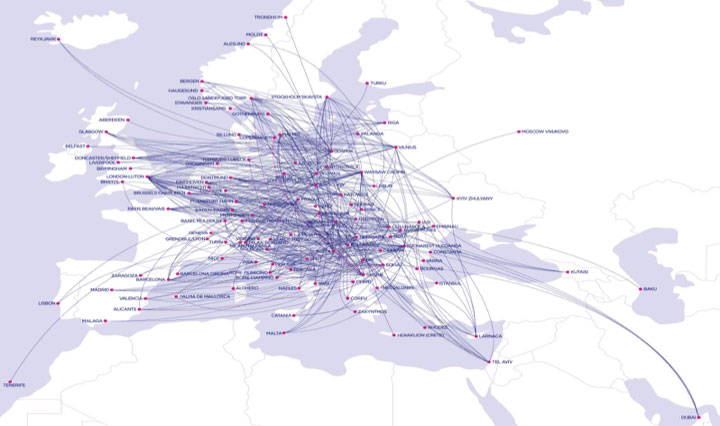 As of December 2015, Wizz Air has 21 operational bases in 12 CEE countries, out of which five are are already established in the Romanian country market (Bucharest, Cluj-Napoca, Craiova, Targu Mures and Timisoara). The airline will introduce is #22 base at Debrecen on 16 December, followed by its #23 base at Iasi on 1 July 2016. Currently, the Hungarian LCC operates 390 routes to 116 destinations in 38 countries, according to its official website.