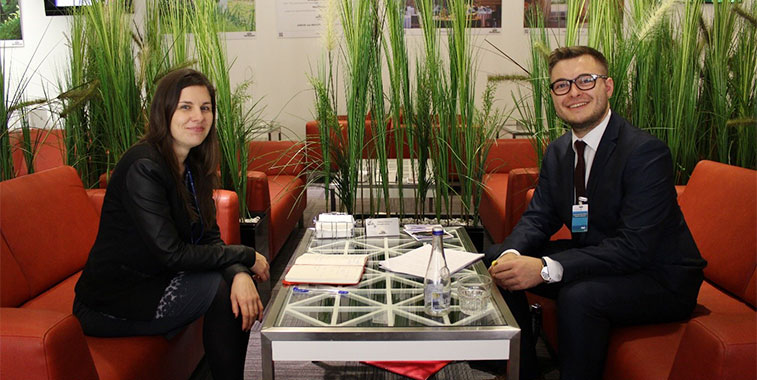 During his recent visit to Lithuania, anna.aero’s Jonathan Ford met up with Lithuanian Airports CCO, Jūratė Baltrušaitytė, to discuss the recent changes being seen in Lithuanian aviation, and how the group is developing its strategy to benefit all three of the country’s commercial airports in Vilnius, Kaunas and Palanga.

Lithuania is the most southern of the three Baltic States, lying to the north-east of Poland. Its capital city of Vilnius will also be the host city of CONNECT 2016, which will be held between the 13-15 March at the National Gallery of Art. Before next year’s event, anna.aero’s Assistant Editor and resident traveller, Jonathan Ford, was fortunate enough to be invited to Vilnius to meet with Lithuanian Airports CCO, Jūratė Baltrušaitytė. One of the key talking points of the meeting between Ford and Baltrušaitytė was the development of the company’s strategy to evenly spread the balance of route development across the nation’s three commercial airports of Vilnius, Kaunas and Palanga, all of which were recently analysed by anna.aero.

The first topic of discussion was the recent announcement that Wizz Air will launch its second service from Lithuania at Palanga Airport. From next year, the ULCC will introduce a twice-weekly service from London Luton on 23 March. Another new carrier to the Lithuanian coastal airport is LOT Polish Airlines, which will open a connection to its Warsaw Chopin hub on 29 March, becoming the third hub carrier after airBaltic and SAS to serve the gateway, and the second Star Alliance member to operate from Palanga.

Speaking to Baltrušaitytė at their meeting, which took place in the business lounge of Vilnius Airport on the calm morning of 1 December, Ford mentioned the development of aviation being spread across the nation’s three commercial airports in light of the recent announcements to which she replied: “I find it quite pleasant that you noticed this strategy. What is important to us is developing links to our regions as well as to the capital here in Vilnius. One thing that we pushing at the moment is the improvement of connectivity to the regions. For Palanga there are two big launches taking place next year which are Wizz Air and LOT. Palanga becomes the second Wizz Air destination in Lithuania after Vilnius and they’ll launch a direct flight to London Luton. This route is fantastic as the UK is the number one expatriate market from Palanga and indeed Lithuania. Secondly LOT will launch a new service to Warsaw. This route is vital as it opens up new connection opportunities for the airport. The region itself is niche so to open up these types of routes to hubs makes Palanga a more international market and easy to access.” 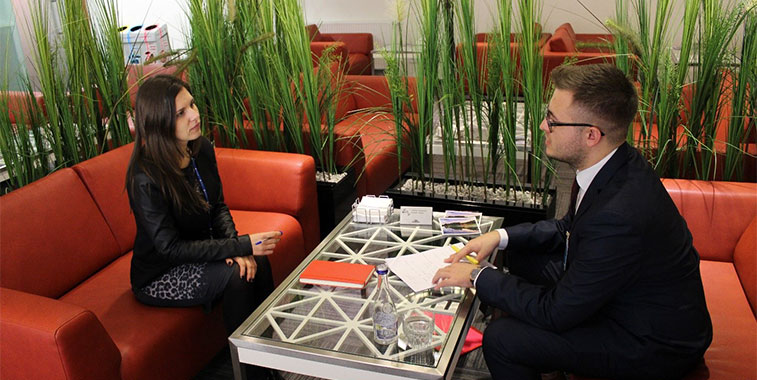 Taking place in the business lounge of Vilnius Airport, anna.aero’s Jonathan Ford, discusses in great depth with Lithuanian Airports CCO, Jūratė Baltrušaitytė, the growth of services from Palanga. LOT and Wizz Air will become the two latest carriers to serve the north-west airport in time for the start of next year’s summer season.

Geographically Lithuania is situated between Poland, Latvia and to the east is Belarus. Baltrušaitytė told anna.aero that the catchment area for Lithuania’s airports is more than just within the country’s boundary. “We have a bigger catchment than just Lithuania. We have a good road network that links to all of the key populations in Lithuania but also towards Belarus, Poland and also Kaliningrad. We are very close to the Belarusian border and the services that we provide from Vilnius are very attractive for Belarusian passengers. We see the potential for Vilnius and also Kaunas to be the gateways to Northern Poland and Belarus as well as Lithuania itself. So not only are we marketing towards Lithuania’s traffic but also to these catchments.”

Discussing the growth that is being seen in Lithuania’s route development brought with it the topic of increasing passenger numbers. We at anna.aero know that it is great when airports secure new airline business, but one factor that needs to be addressed is how the external factors will help to develop the shape of a new route, and also new airline business. When asked about how the economic outlook for Lithuania was shaping up, Baltrušaitytė confirmed to Ford that: “The economic GDP is growing at an average of around 3% per annum and it has been like this for the past three years. 2015 is currently forecast to be at around just over 2%. Lithuanian inflation at the moment is in the ballpark of 0.5%, so our market is very stable.” Baltrušaitytė also said that in relation to passenger growth, Lithuania is far exceeding the competition of fellow eastern European countries. “Correlated to passenger growth, the traffic in Lithuania is growing at around three times the percentage of the GDP, this ratio puts Lithuania in the same ball park as the UAE and Taiwan, nations where aviation is a key industry. When I discovered this I found it really exciting.”

All passenger types in demand…

The genres of all passenger types are growing in Lithuania comments Baltrušaitytė: “We are seeing growth within the business, leisure and low-cost markets which means that all types of people are flying. One trend that has been noticed recently is that passengers are starting to use more premium services.” As Ford sits in the business lounge of Vilnius Airport the day after his meeting with Lithuanian Airports, he can confirm that premium travel is popular as he counts 15 passengers using the premium lounge while waiting for his flight. Although 15 passengers seems a low amount, it is actually a good ratio as during the time Ford was in the lounge only three flights were on the departure board, with two of them on regional jets. One was to Riga on airBaltic, the flight which Ford caught for his connection to London Gatwick, Aeroflot to Moscow Sheremetyevo and LOT to Warsaw Chopin. 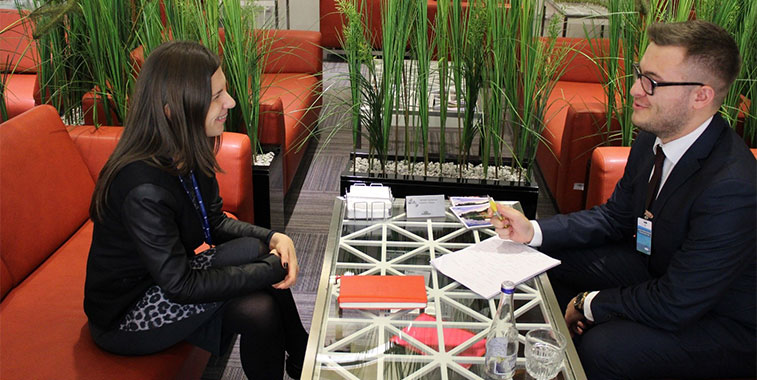 A barrel of laughs. Apart from talking about the growth of Lithuania’s aviation industry, Lithuanian Airports CCO, Jūratė Baltrušaitytė and anna.aero’s Jonathan Ford are seen having a laugh talking about something. Although he cannot remember what he said to Baltrušaitytė, he is sure that it was probably something embarrassing that had recently happened to him (Ford is the clumsiest of the anna.aero family).

Unfortunately Lithuania’s last attempt at a national carrier, Air Lituanica, ceased operations in May this year. Recently speaking to anna.aero, airBaltic’s VP of Corporate Communications, Janis Vanags, told Ford that airBaltic was picking up where Air Lituanica left off and commented that it sees big opportunities for growth from Vilnius. Commenting on this news, Baltrušaitytė said: “We congratulate airBaltic for filling in some of the void that has been left from the demise of Air Lituanica. We are glad that they are considering us within their new strategy, however a transparency needed to be maintained. They have launched Amsterdam, Paris CDG and Berlin Tegel, and we hope that they will introduce more direct links to Vilnius in the near future.”

Of course the most common answer to the question of which markets would you like to see served that are currently not is always “all of them…”, and here is no exception. When Ford puts this question to Baltrušaitytė that is exactly what she said. However going into more detail, she answered: “Of course we would love to serve more connectivity on markets we already have direct links to. Sweden is a prime example, over the past two years the market to Sweden has grown twice in relation to passenger traffic, so we see more demand there. Two markets which have brought significant issues to us are Russia and the Ukraine, which is for obvious reasons. What I can tell you however is that these markets have been compensated by others, so we really haven’t lost many passengers in that regard. Southern Europe has a lot of potential and as well as this we see the demand for services to the former CIS countries. We are seeing a strong development in the business growth between them and Lithuania, so we know that the traffic is there.” The day before anna.aero’s meeting with Lithuanian Airports, Baltrušaitytė had been on business in Geneva, so it came as no surprise that she also mentioned that she’d like to see growth to Switzerland as well. Within Europe, Munich, Prague and Zurich were the three highlighted routes that the group would love to see with direct links to Lithuania.

In relation to the low-cost market, Ryanair and Wizz Air currently each have a base in Lithuania, with the former having a base and maintenance facility in Kaunas, and Wizz Air at Vilnius. One highlight from the meeting was that the local municipality was interested in developing Kaunas Airport. “Ryanair has a maintenance facility currently at Kaunas and we are hoping to grow this relationship. MRO and cargo have great growth potential from Kaunas,” commented Baltrušaitytė. The group is also hoping to drum up new business from next year’s CONNECT conference which is taking place in Vilnius, with airBaltic, which has recently grown from the city being the host carrier. In relation to future business, it is worth noting that Lithuania has a much higher O&D traffic than Latvia, confirmed by Baltrušaitytė. “With a strong O&D market it means that it is good for developing markets and also makes existing ones very sustainable compared to the risk of connecting traffic which is strong in Riga. Lithuanian Airports also has a route development fund in place which offers very attractive support to gain new routes,” commented Baltrušaitytė. 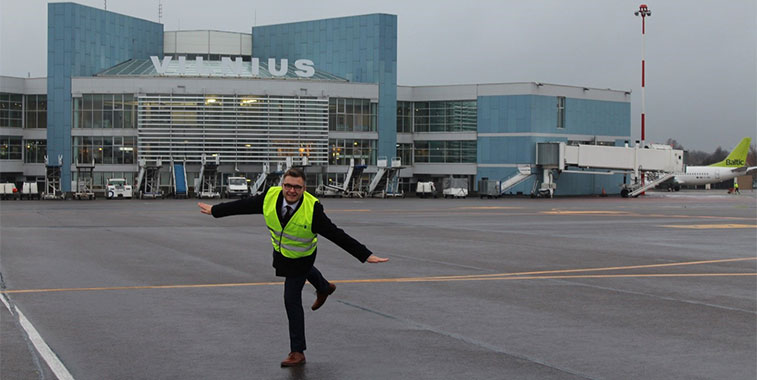 “Jonathan…for the last time just because you’re wearing a high vis jacket, it does not make you an airBaltic aircraft….now get off the apron before Wizz Air runs you down.” What can be seen in this picture is the trio of facts that you need for next year’s CONNECT conference. The name of the host carrier, which is airBaltic. The location of the event, Vilnius, March 2016, and finally one of the team that will be there to produce one of the famous anna.aero show daily magazines.