Bordeaux Airport hops over the five million passenger mark; anna.aero was there to share in the celebrations Jean-Luc Poiroux, VP Business Development, Bordeaux Airport gives the thumbs up to the airport’s five millionth passenger this year, Thomas Trévisan (second from right), who was flying with HOP! on 8 December 2015 to Lyon on the 13:50 departure operated by one of the carrier’s CRJ 1000s. Joining them on the apron were Anne Hery Cabanes, Regional Manager, HOP! (second from left) and Bénédicte Pellerin, Regional Director South-West for Air France (far right). Those of you with good eyesight may be able to spot an Air Inter Dassault Mercure lurking in the background as well as a Caravelle, which was once used for zero-gravity flights.

anna.aero’s Chief Analyst, Ralph Anker, got within a few thousand of being Bordeaux Airport’s five millionth passenger this year, but that honour was finally awarded on 8 December 2015 to Thomas Trévisan, a passenger on the early afternoon HOP! service from the airport to Lyon. Having handled just over 3.2 million passengers per annum as recently as 2009, the airport’s 55% growth in just six years has been highly impressive. The opening of a dedicated low-cost terminal, billi, in 2010 has helped significantly, but a strong local economy has also been a key factor. Bordeaux Airport invited anna.aero along to be the only foreign media attending the milestone celebrations, which kicked off at around noon.

A milestone worth celebrating (with cakes of course!)

The Salon Charles Lindbergh was the venue for the milestone celebrations, with Bordeaux Airport staff joined by airline representatives, the media and the lucky five millionth passenger, Thomas Trévisan, a sales manager for medical equipment company Johnson & Johnson. Pascal Personne, President of the Board of Directors of Bordeaux Airport, gave a speech outlining the airport’s development in recent years. This was followed by a short photographic video showing some of the airport staff holding congratulatory messages.

Thomas Trévisan was then presented with a free return ticket for two on HOP!’s Bordeaux to Rome service (not to mention a HOP! goody bag) by HOP!’s Regional Manager, Anne Hery Cabanes. As a final gift, Thomas was then given a “Croix de Guyenne” magnum bottle, the famous wine produced by Bordeaux Airport’s own vineyard. After some souvenir photos there was a big cake to cut and share out with everyone who attended the event.

anna.aero would like to thank Jean-Luc Poiroux (VP Business Development) and Catherine Caraglio (Head of Routes Development) for the invitation to Bordeaux and the chance to share in the airport’s milestone. 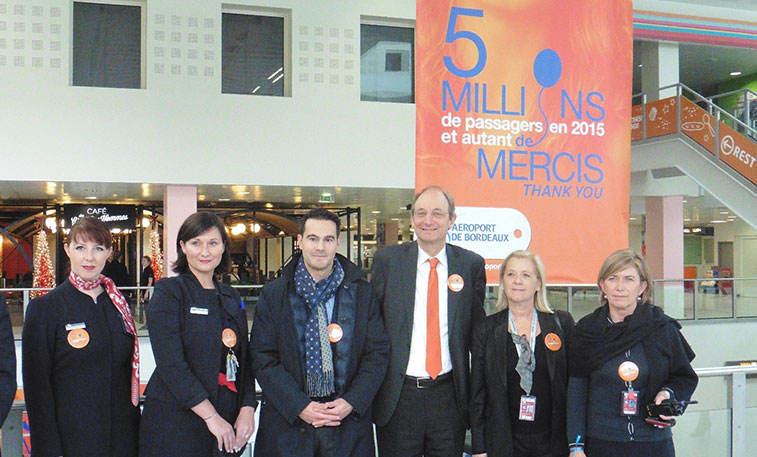 Pascal Personne, President of the Board of Directors of Bordeaux Airport, (third from right) shares a photo opportunity in the terminal with the five millionth passenger, Thomas Trévisan (third from left) along with Bénédicte Pellerin, Regional Director South-West for Air France (second from left) as well as Air Franc cabin crew and operations staff. Special orange “5 million” souvenir badges were handed out to guests attending the milestone celebrations. 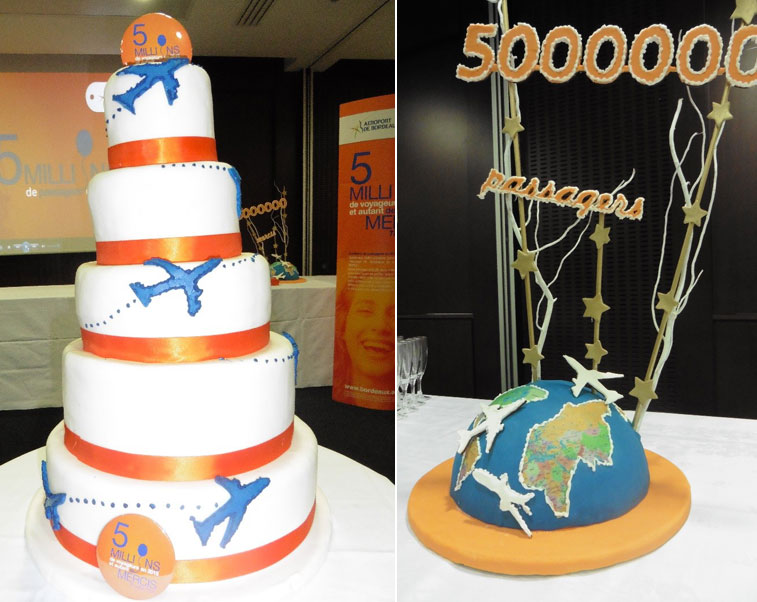 There were two different designs of cake to celebrate the five million passenger milestone on 8 December. The one on the left was a multi-layer effort which was eventually cut into many slices and shared with airport and airline staff. Local and regional media interest in the event was high, with TV, radio and written press all attending the milestone celebration. Thomas Trevisan, the five millionth passenger, receives his free return flight to Rome (for two people) from Anne Hery Cabanes, Regional Manager, HOP! Pascal Personne, President of the Board of Directors of Bordeaux, then presented the lucky passenger with a “Croix de Guyenne” magnum bottle, the famous wine produced by Bordeaux Airport’s own vineyard. 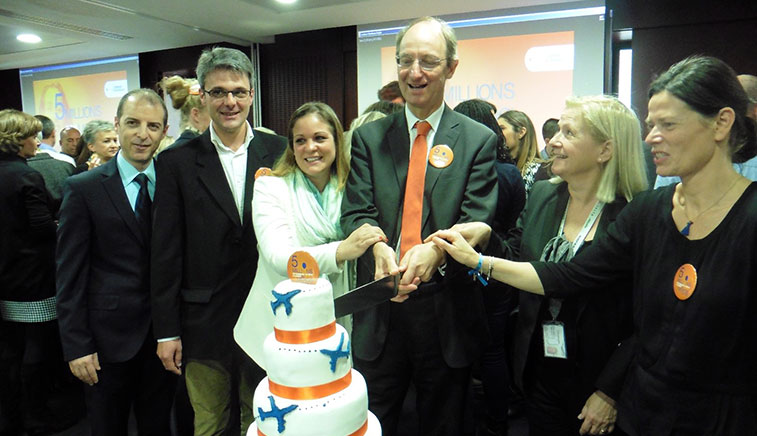 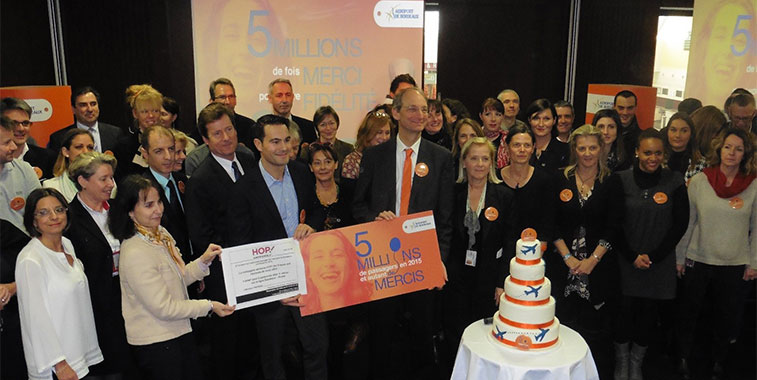 Over 100 staff from the airport and serving airlines were on hand to celebrate this key milestone. 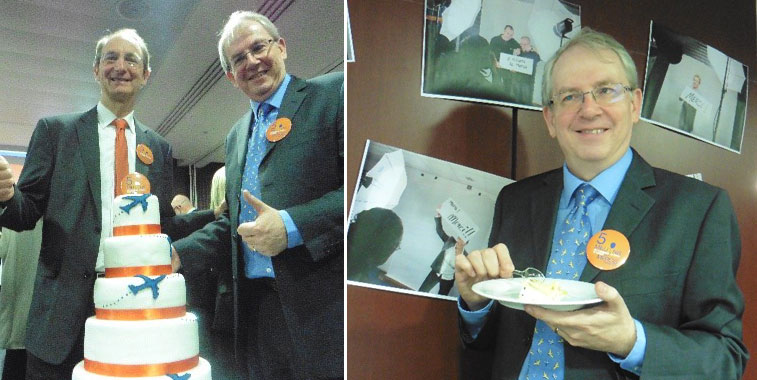 Pascal Personne, President of the Board of Directors of Bordeaux Airport personally invites anna.aero’s Chief Analyst Ralph Anker to try some of the impressive cake baked to mark the day’s events. So he did…