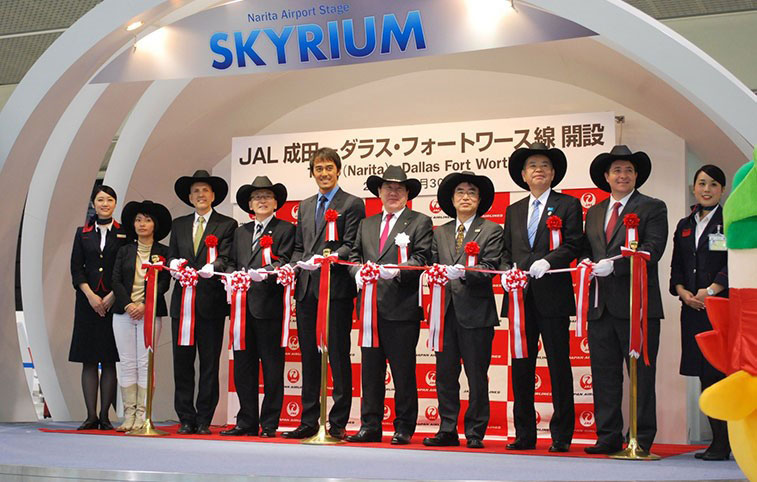 The last few years have not exactly been yee-hah for Japan Airlines, but the extended period of falling passenger numbers seems to be well and truly at an end after four consecutive years when both domestic and international passenger figures have been growing. New routes, like the recently relaunched Tokyo Narita to Dallas/Fort Worth service, resumed after a 14-year hiatus, certainly gave these cowboys something to smile about.

Japan’s flag carrier, but only its second largest airline (All Nippon Airways is nearly 40% bigger in terms of weekly seats), Japan Airlines (JAL) has seemingly turned its back on years of falling passenger numbers, after four consecutive years when both domestic and international passenger figures have been growing, according to the airline’s latest accounts. The now right-sized JAL is significantly smaller than its bloated former self, carrying 29% less passengers in FY14/15 versus those which travelled with the oneworld airline in FY08/09 – a net reduction of nearly 16 million annual passengers. To put this drop in passenger numbers into context, in the last seven years it has reduced its size by a Wizz Air – the European ULCC carried just less than 16.5 million passengers in total in the FY2014/15. 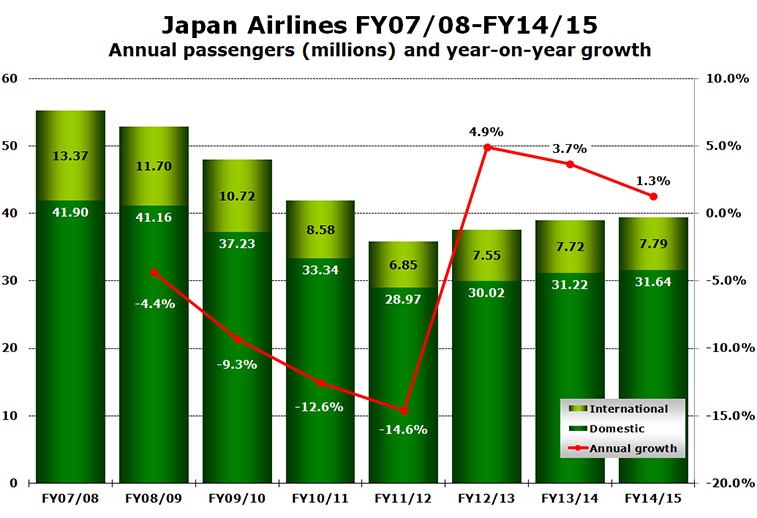 What may be worrying for the airline’s suits in Tokyo, is the fact that the bounce back in passenger volumes was being matched with an improvement in load factors – in FY11/12 it was 76.5% and increased to 77.8% in the next financial year (annual capacity derived from OAG schedule data). However in the next two years there has been a disconnect between the capacity being added and the loads being carried, as load factors have fallen to 75.0% in FY13/14 and then 74.7% in FY14/15.

The airline’s weekly seats, when doing a year-on-year comparison for the second week in December 2015 versus the same seven days in 2014, reveals a marginal 2.4% reduction in capacity. The top 12 bases command 74.2% of JAL’s weekly seats, down slightly from the 74.1% recorded a year ago. In terms of the carrier’s biggest bases, both Tokyo Haneda and Osaka Itami have been nibbled at by its network planners over the last 12 months, falling by 1.7% and 2.2% respectively. The fastest growing operation for JAL is found at Nagasaki, which has increased by nearly 15% since last December. Only two other airports in the top 12 have posted positive figures in this period – namely Sapporo Chitose (+7.1%) and Nagoya Chubu (+5.3%), with Tokushima flat. 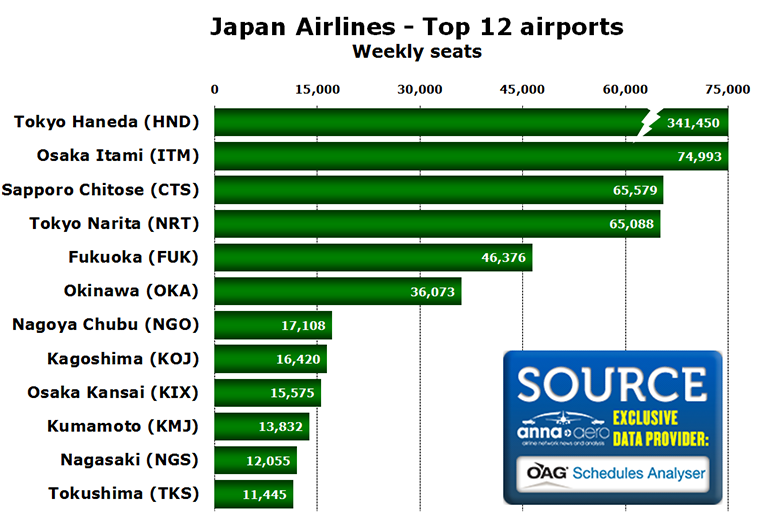 While star performers amongst the airline’s top 12 airports are scarce, competition is fierce to be the bad guy, although at least none of the operations are posting double-digit declines. Tied for top spot in the naughty league are Tokyo Narita and Okinawa, both of which have witnessed annual capacity trims of 8.8%, narrowly seeing off the challenge from Kumamoto (-7.6%). JAL’s biggest non-domestic airport in December 2015 is Honolulu, its 15th largest operation, with over 10,000 weekly seats. Not far behind in 17th with 9,000 weekly seats is Shanghai Pudong.

The airline’s domestic routes are undoubtedly the most important market for JAL, controlling as they do 78.9% of total weekly seats this year (down marginally from 78.6% last December). The carrier’s top 12 routes contribute nearly half of its total capacity, but again this figure has been reduced year-on-year, from 46.1% in December 2014 to 45.6% in December 2015. Mixed fortunes seems to have been meted out on the top two routes, with Haneda to Fukuoka down 5.0%, while Haneda to Sapporo Chitose is up 6.1%. The result of these capacity tweaks means that the #2 route is only 362 seats smaller than the #1 airport pair. 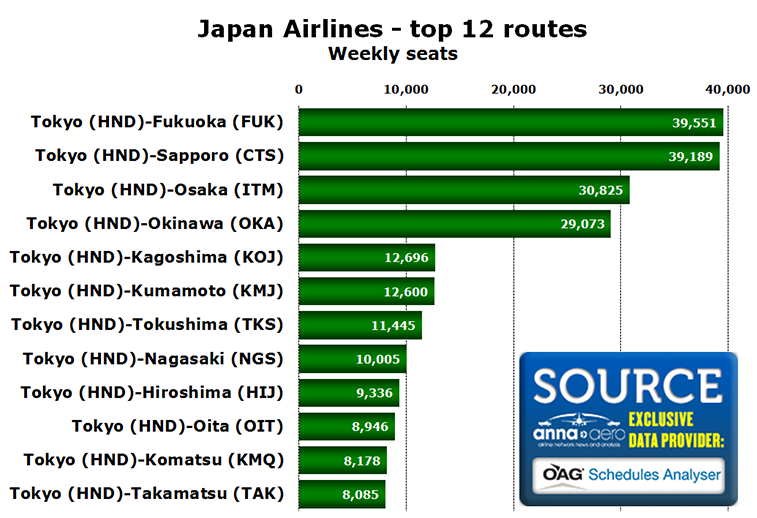 Nagasaki is again the airport’s best-performing facility in this particular top 12, with the route from Haneda registering a 20% annual increase, seeing it leap from 11th to eighth. There are two airport pairs delivering double-digit declines over the last 12 months, with cuts on the Haneda-Komatsu route (24%) outstripping those encountered on Haneda-Okinawa (-13%). The airline’s biggest non-domestic route in December 2015 is its service from Tokyo Narita to Honolulu, its 24th largest route, which is served on a 22 times weekly basis.

When consulting anna.aero’s New Route Database it seems that JAL’s return to Dallas/Fort Worth from Tokyo Narita on 30 November is the last piece of route development for some time, with no new routes currently planned. There is however plenty of new route activity in the Japanese market from a gamut of airlines like V Air, Jetstar Japan, Finnair, Hawaiian Airlines, Cebu Pacific Air, Spring Airlines, LOT Polish Airlines, Air China and American Airlines, many of which are looking to take a piece out of JAL’s market share. Japan Airlines’ global, regional and domestic networks. Given the depth of coverage the oneworld carrier has in its domestic market, it is no surprise that it commands nearly 80% of all seats flown by the airline.