The MEB3 lead the way in connecting the Middle East with China, yet all three are reporting declines in capacity 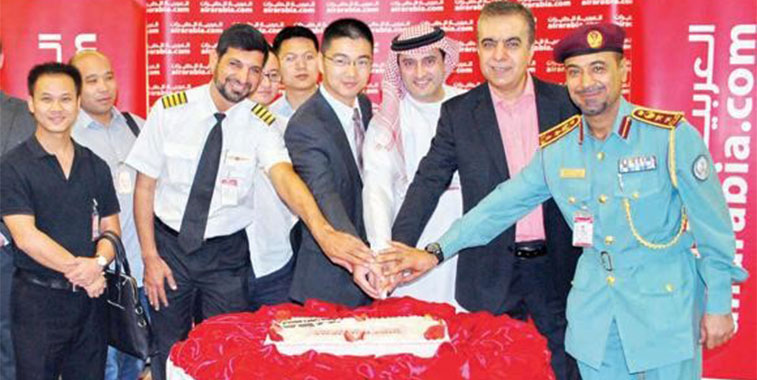 This year Air Arabia made history by becoming the first LCC to enter the Middle East – China market after launching services between its Sharjah base and Urumqi. The carrier is the 12th largest of the 13 that serve the market, overtaking Iran Air.

With 2016 bringing with it the start of China Southern Airlines growth in the Middle East – China market as it plans to connect Shenzhen and Wuhan with Dubai, anna.aero’s data elves though it would be a good idea to take a look to see how the market has grown over the past couple of years. Dubai has developed its connections to China over the past 12 months, with the most recent arrival being Sichuan Airlines when it commenced services to the UAE hub from Chengdu and Yinchuan just a few weeks ago. However, the biggest headline that anna.aero has come across during the analysis of this market is that the three leading carriers of Emirates, Qatar Airways and Etihad Airways (otherwise known as the MEB3) are all reporting declines in seat capacity. 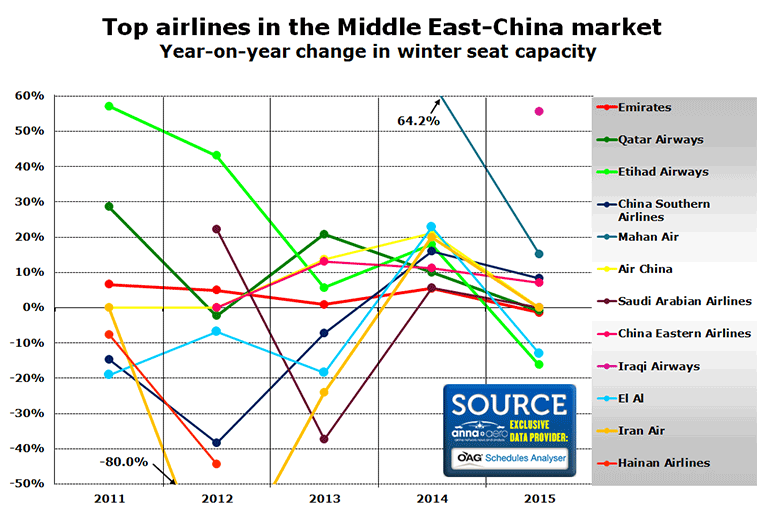 In terms of the MEB3, Etihad Airways is letting the side down after recording a decline in seat capacity over the past 12 months of just over 16%, however Emirates and Qatar Airways are also showing drops of 1.4% and 0.9% respectively. The overall result means that the MEB3’s seat capacity from the mega hubs of Dubai, Doha and Abu Dhabi is down 3.6%. One reason for the decline could be down to the strong growth currently being seen in the China-Europe market, the biggest connecting market for the MEB3 in regard to the Chinese onward market. Amsterdam, Rome Fiumicino and Prague are just three of the airports in Europe which have seen direct service growth to China during 2015, resulting in Chinese connections through the Middles Eastern hubs being less attractive in terms of journey times for passengers. The most successful of the existing carrier’s in the Middle East to China market is Iraqi Airways, which links Baghdad to Beijing, and in September 2014 inaugurated flights to Guangzhou from the Iraqi capital. One noticeable factor that is visible from the graph above however is that within the market no airlines are showing consistent levels of growth. 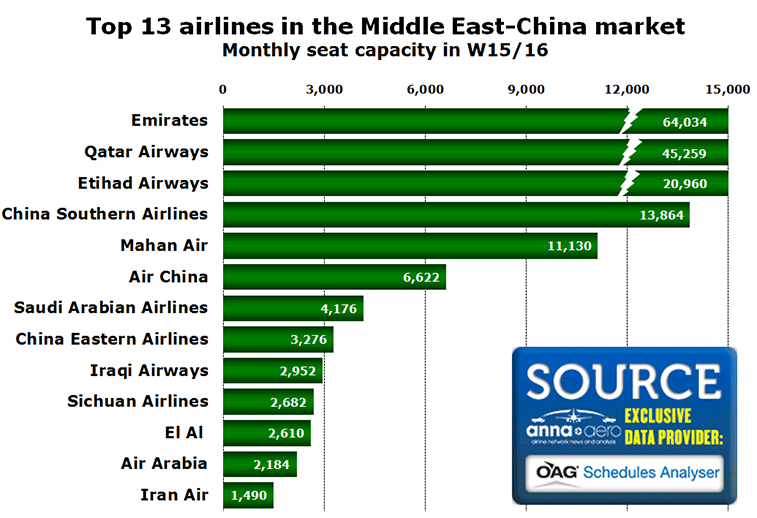 The two new airlines to the Middle East – China market are Sichuan Airlines and Air Arabia. The latter joined the party in February when it launched flights between Sharjah and Urumqi, while the former airline launched flights at the start of the current winter season when it commenced services to Dubai from Chengdu and Yinchuan. Although all MEB3 carriers are reporting declines in the market, combined they have 72% of all seats. 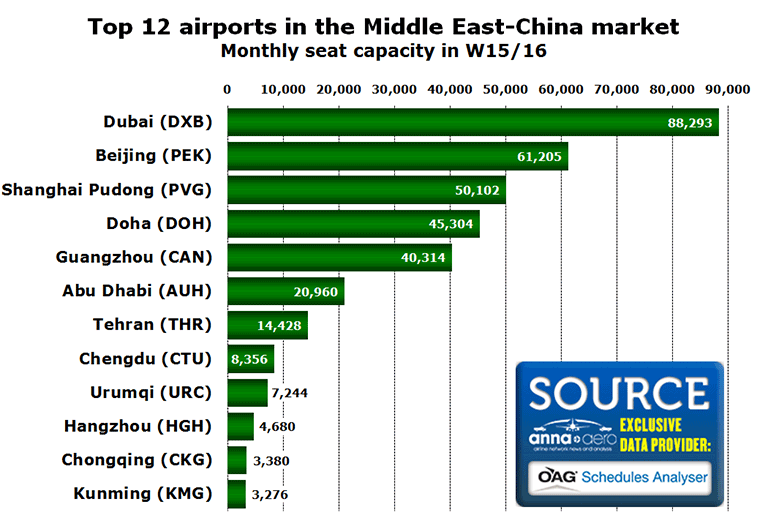 After recording a growth in seat capacity of 3.2% to China, it is Dubai that remains as the number one airport in the market. However with Emirates recording a decline in the market of 1.4%, it shows that Chinese carriers are starting to enhance their own operations to the Middle Eastern hub. Overall approximately 724,000 seats (two-way) are on offer per month during W15/16 within the market, meaning 24% of monthly seats will be to and from Dubai. In relation to China, Beijing is the number one destination and has seen its seat capacity offering grow by 3.1% over the past 12 months according to OAG Schedules Analyser data. Overall, 19 airports within China and the Middle East are connected in the market pair.

China is an economy which is still growing, with direct air links to the country being a high priority for many an airport new route wish list around the world. Currently the following Chinese airports have a passenger throughput of over 20 million per annum and yet do not have a direct link to any of the Middle Eastern hubs: Xi’an, Hangzhou and Xiamen. With Xiamen Airlines currently developing its long-haul product it is possible that it is looking at serving the Middle East from the airport which shares its name. Xi’an could potentially be connected to any of the hubs by Hainan Airlines as it grows from the airport, however it is Sydney which will be its next long-haul route from Xi’an launching later this month. It is also worth noting that Hainan Airlines until 2013 did have routes to Dubai.

What is surprising is that although these airports have a passenger throughput of over 20 million, none of the MEB3 serve them. Equally baffling to anna.aero is that Emirates is allowing Qatar Airways and Etihad Airways to serve Chengdu, making the destination one of only a few in the world to have MEB3 services without Emirates being one of them. Chengdu Airport welcomed over 37 million passengers last year. With the city being host to the World Routes Conference in 2016, and the airport seeing growth in direct links to Europe, with Air China launching flights to Paris CDG on 12 December, anna.aero predicts that Emirates will soon be looking at offering services to the facility in order to get a hold in the market. Following the success of World Routes in Durban earlier this year, the city was able to secure its second MEB3 carrier in Qatar Airways. Could the same happen for Chengdu in gaining the final one of the MEB3 trio? 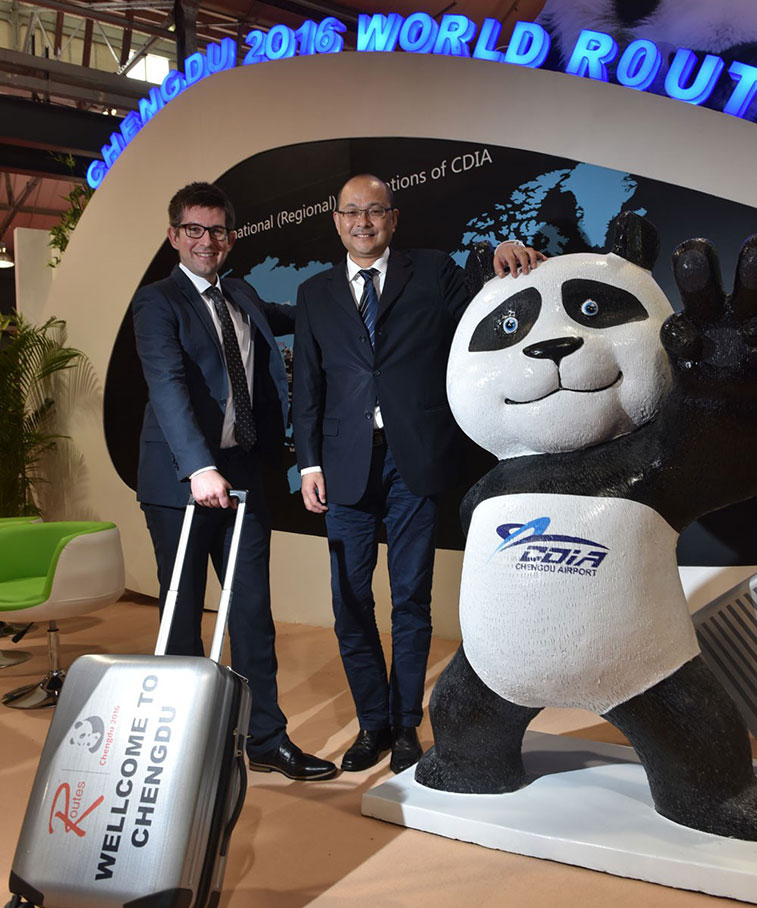 Get set for World Routes 2016. Chengdu is currently the eighth largest airport in the Middle East to China market, and is also the host city of next year’s World Routes Conference. Currently the airport is only served by Qatar Airways and Etihad Airways from the MEB3. anna.aero’s Ross Falconer, pictured with Li Wei, Board Chairman, Sichuan Province Airport Group Co Ltd said he is excited to be going to Chengdu next year. The question is could the final one of the MEB3, Emirates, commence flights to the city of 37 million passengers in time for the conference? After all, Emirates is the number one carrier in the Middle East to China market.