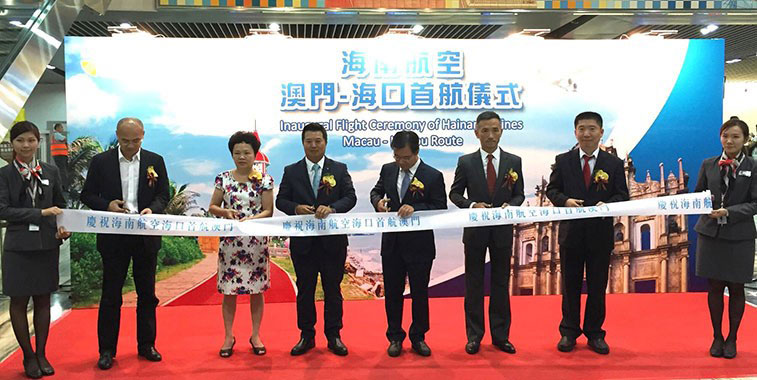 Not only was Hainan Airlines a new airline at Macau Airport in September, but Haikou was a new destination for the airport too. The airport serving the former (until 1999) Portuguese enclave has welcomed five new airlines and six new destinations this year.

Macau is a small peninsula in Mainland China, across the Pearl River from Hong Kong that is famous for its nightlife, shopping malls and casinos – so much so, that it is also named the ‘Las Vegas of Asia’. Many visitors arriving in the former Portuguese enclave (until 1999) transit through Macau International Airport on their way to the city’s many attractions. The facility is served primarily by its flag carrier Air Macau, which operates a fleet of 17 A320 family aircraft (according to planespotters.net) to 26 regional destinations. 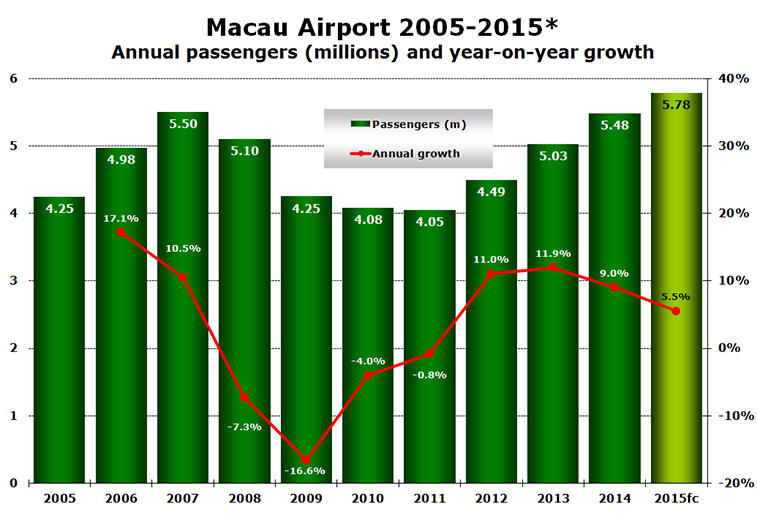 Up to the end of November 2015, the airport has registered annual growth of 5.5%, which should see Macau break its all-time high passenger traffic result. On this basis, anna.aero’s data elves are forecasting an annual figure of just under 5.8m, surpassing the previous record year of 2007, meaning that the rebuild of the airport’s traffic base will be complete after four years of consecutive growth. The fastest growing market fuelling this increase is that of Taiwan, which has risen by 34% over the past year, according to the airport’s latest data. 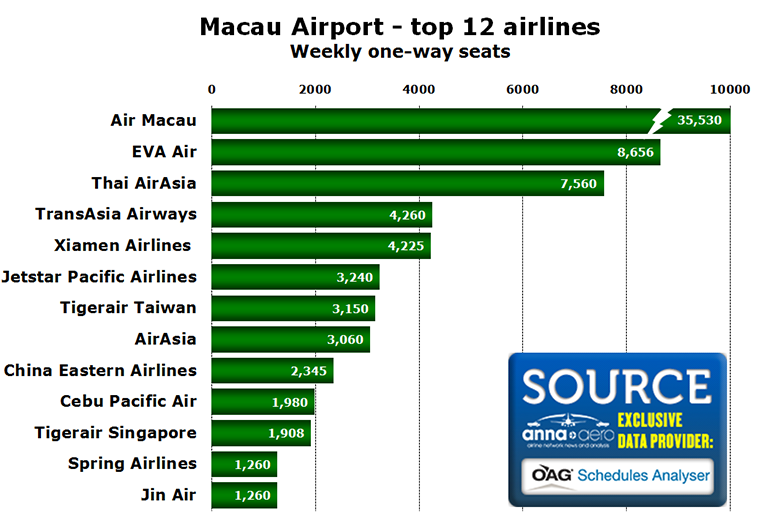 Star-performing carrier at Macau is however Thai AirAsia, with annual growth of 20%, coming as a result of the LCC recently adding a daily service to Utapao on 27 November. The carrier with the bloodiest nose in the Macau top 12 airlines from 2014 is Thai Airways’ in-house LCC Thai Smile Airways. It has reduced its double-daily frequency on its service from Bangkok Suvarnabhumi down to daily, resulting in the carrier falling out of the top 12 in the past year. With a 50% cut, this far outweighs the other top 12 airlines trimming capacity at double-digit rates – namely Jetstar Pacific Airlines (-14%), Tigerair Singapore (-12%), Jin Air (-11%) and TransAsia Airways (-10%).

Looking at one-way seats in the week commencing 9 December, Macau has 7.9% more available this year than the same week 12 months ago. However, the share of total seats controlled by the airport’s top 12 routes has actually fallen from 72% in December 2014 to 68%, due in part to the host of new destinations added to Macau’s portfolio. According to OAG Schedules Analyser, the airport currently has a network of 43 scheduled routes, up from the 37 recorded in the same week last year. This year, the airport has successfully attracted routes to Haikou in China, Ho Chi Minh City and Haiphong in Vietnam, Malé in the Maldives, as well as Koror in Palau and Utapao in Thailand. 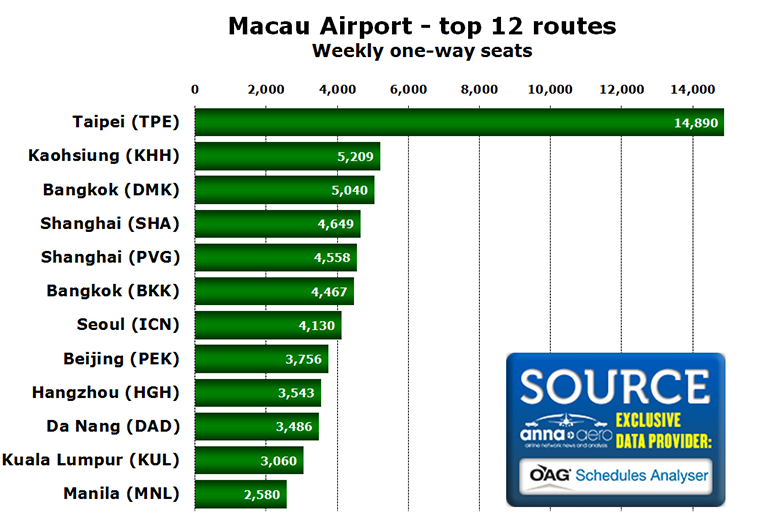 Three routes from the top 12 have all posted double-digit increases over the last year, with Taipei Taoyuan (+13%) leading the way from Seoul Incheon (+11%) and Kaohsiung (+10%). Bottom of the pile, in terms of Macau’s most important routes, is Da Nang, with a 26% annual reduction in weekly one-way seats that has seen it tumble from sixth spot last December to 10th this year. Only three other routes have registered any sort of decline in capacity, but all significantly less than the Vietnamese destination, with Kuala Lumpur down 6%, Manila by 4% and Shanghai Pudong by 3%.

Presently, Macau has services to just 12 country markets, however with the introduction of Palau and Maldives over the last 12 months, this has increased from the 10 offered last December. Despite one new city pair – Macau to Haikou – being added since last December, the #1 country market of China has seen its share of weekly frequencies fall marginally year-on-year from nearly 39% to 37%. The capacity growth previously described to the Taiwanese destinations of Taipei Taoyuan and Kaohsiung make it is easy to comprehend why the frequency share of the #2 market has increased year-on-year by 1% ‒the second most significant increase of all the countries listed. Japan leads the way on that metric, growing its frequency share by 1.1% since last December. 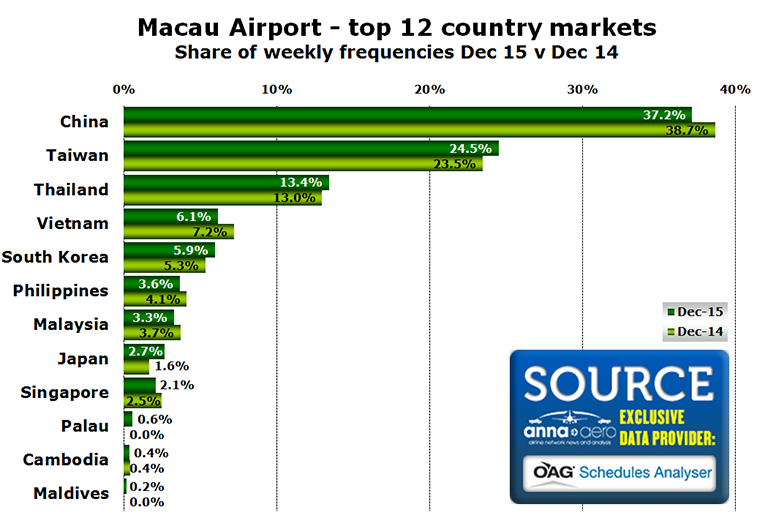 Looking ahead at any potential new routes being planned from Macau, currently anna.aero’s New Route Database is empty for 2016. However, with four years of consecutive growth behind it, a double-digit growing based carrier (with one A320 and one A321 planned to join the fleet – according to planespotters.net), our data elves are prepared to take a gamble that Macau’s future traffic is headed in the right direction. 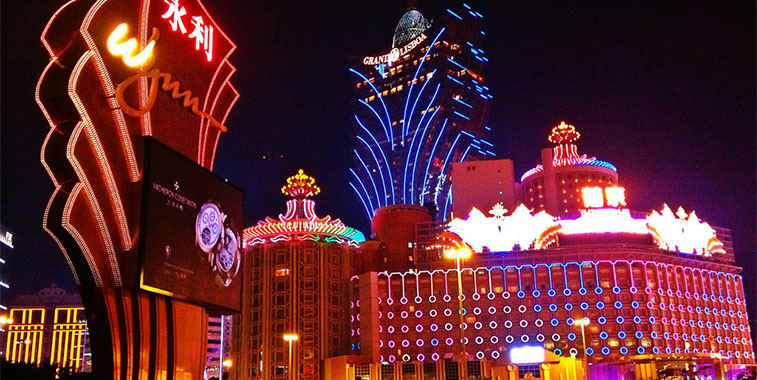 Is this Vegas? Nope it’s Macau…but it is known as the ‘Las Vegas of Asia’. This small peninsula in Mainland China, across the Pearl River from Hong Kong is famous for its nightlife and casinos. So while it’s a bit like its American cousin, the airport is nearly eight times smaller than the US destination.