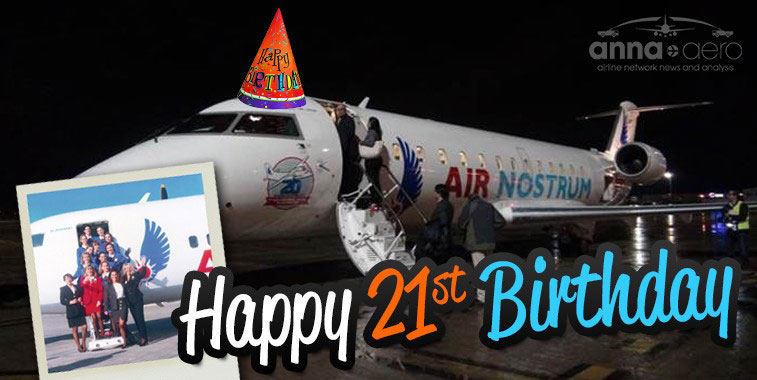 On Air Nostrum’s 20th birthday last year, the airline revealed a special commemorative livery on one of its 50-seat CRJ 200s – just one aircraft type from 38 unit fleet that the Iberia franchisee boasts today. All of this is a far cry from the carrier’s humble beginnings (see inset), when it was flying Fokker 50s, including its first flight from Valencia to Bilbao on 15 December 1994 – which had just a 32% load factor. Domestic sectors are still the foundation stone of Air Nostrum today.

Air Nostrum, the Iberia franchisee airline also known as Iberia Regional, which is headquartered in Valencia, is 21 this week. On 15 December 1994, the company’s initial Fokker 50 took off on its inaugural flight from Valencia to Bilbao with 16 passengers aboard under the flight code YW251. According to planespotters.net, the oneworld affiliate member currently operates 38 aircraft – including five 72-seat ATR 72-600s, 10 50-seat CRJ 200s, 13 90-seat CRJ 900s, and ten 100-seat CRJ 1000s. It flies these aircraft to 47 destinations across Europe and North Africa, of which 31 are in Spain, seven in France, two in Portugal, with one each in Denmark, Estonia, Gambia, Italy, Mauritania, Morocco and Senegal. 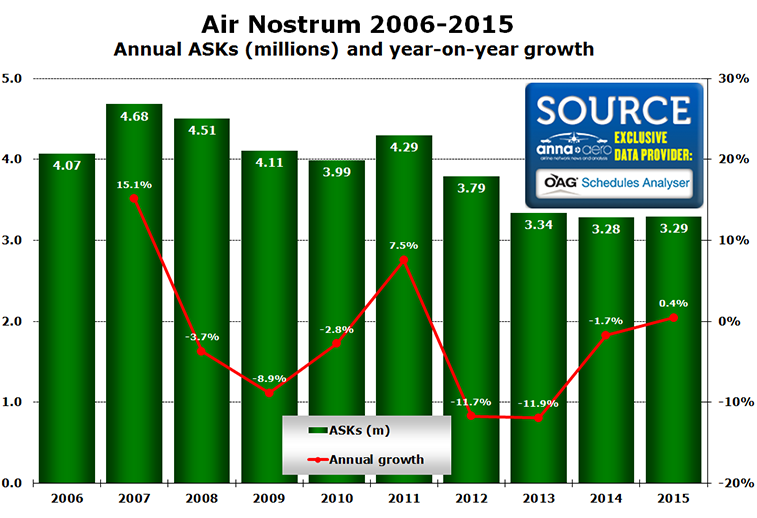 For an airline which is heavily reliant on the Spanish domestic market, undoubtedly the last few years have been tough for Air Nostrum, as Spain has struggled to overcome the prolonged period of economic malaise and high levels of unemployment. These hard times are clearly evident in the carrier’s ASK figures, as it has right-sized the business to accommodate these market changes. Whether it will ever recapture the 2007-high in terms of this particular metric ‒ critically just before the crippling global economic crisis ‒ is uncertain at this point, but 2015 has at least seen a return to ASK growth for the first time in four years.

Unsurprisingly, Madrid, where the airline primarily feeds its franchise owner Iberia, as well as being the focal point of its essential job of bringing regional residents of Spain to the capital, is Air Nostrum’s most significant operation – with nearly one in three weekly seats touching the city. The airport’s importance has not dwindled here over the last 12 months either, with 5.1% more seats available this December versus the same week in December 2014. The top 12 airports currently represent 71.7% down marginally from the 71.9% recorded last year. Only one of the airline’s top 12 airports is outside of Spain, which is Toulouse (highlighted in light green). Air Nostrum currently operates 32 weekly flights to Madrid, as well as a six times weekly service to Seville from the French airport. The importance of the Balearic Islands to the airline is shown in this chart, with three out of the top five airports coming from the region. 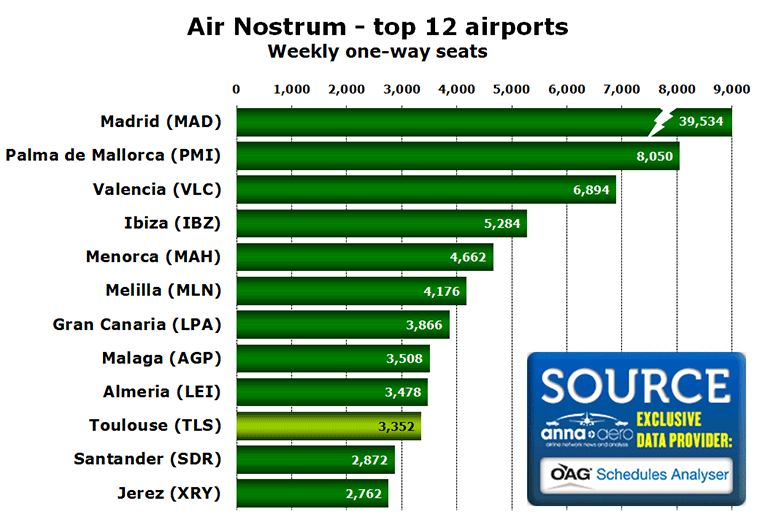 The fastest growing airport in the Air Nostrum network is Gran Canaria – which has grown by 153% in terms of weekly seats since last December. This has seen the Canaries airport rise from 18th spot last year to seventh place in this year’s line-up. There were also a plethora of other double-digit growing airports in the top 12, with Almeria (+27%), Malaga (+25%), Jerez (13%), Ibiza and Santander (both 12%) witnessing some impressive seat increases. Air Nostrum’s home airport of Valencia is one of just two airports posting capacity declines over the last 12 months, with its 5% fall being larger than that experienced by Menorca (-2%).

According to OAG Schedules Analsyer, Air Nostrum is flying 72 scheduled routes this December, with 11 of the most important routes, in terms of weekly one-way seats at least, being domestic. The importance of the Balearics and Madrid markets are evident again in this chart, with many of the top 12 routes featuring the capital or an airport, or airports, from the islands. Somewhat uniquely, not one of the top 12 routes has witnessed a capacity decline over the last year, with only the Palma de Mallorca to Menorca airport pair being static year-on-year. Two capital city connections lead the way in terms of annual seat growth, with Almeria to Madrid up 32% beating the Pamplona to Madrid route which had increased at the far-from-sluggish rate of 21%. 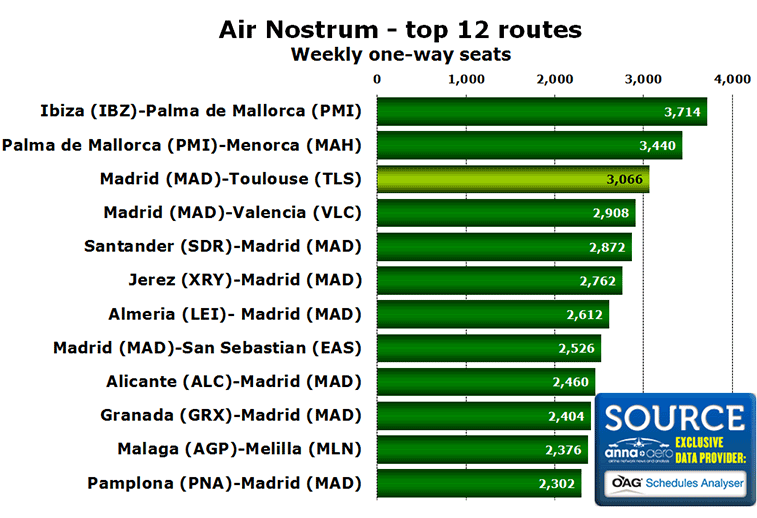 The airline operated to 47 scheduled destinations in December 2014 and it still flies to 47 points this year, although there has been some route churn, with Nouakchott in Mauritania, as well as La Palma and Fuerteventura in Spain being added to the network, while service to Praia in Cape Verde, and Valladolid and A Coruña in Spain have been suspended. Looking ahead, Air Nostrum is intending to launch a new twice-weekly service (Fridays and Sundays) between Alicante and Palma de Mallorca on 27 March, as well as four seasonal services from Vigo to Alicante, Brussels, Menorca and Rome Fiumicino starting in July.