Jordan sees its winter seat capacity rise by 7.7% while the UAE remains its number one market On 18 May, Air Arabia Jordan commenced operations with its first service being between Amman and Kuwait City, with the route being opened by Adel A. Ali, CEO of the Air Arabia group. This winter, seat capacity to Kuwait has grown by just over 18%, meaning that the country market within the past 12 months has grown from being the sixth to being the fifth most popular from Jordan.

The country of Jordan is served by two commercial airports with the larger of the two being Amman Airport serving the country’s capital. The other is Aqaba in the nation’s south-west region near the border with Israel. According to OAG Schedules Analyser data, Aqaba Airport is served by only two scheduled carriers on two routes at this time of year, with Royal Jordanian linking the facility with the capital, Amman, while Turkish Airlines also operates to the airport from its Istanbul Atatürk hub. In addition Aqaba welcomes many charter flights during the summer months, in particular from Russia. Over the past 12 months however, seat capacity to Jordan has grown by 7.7%. 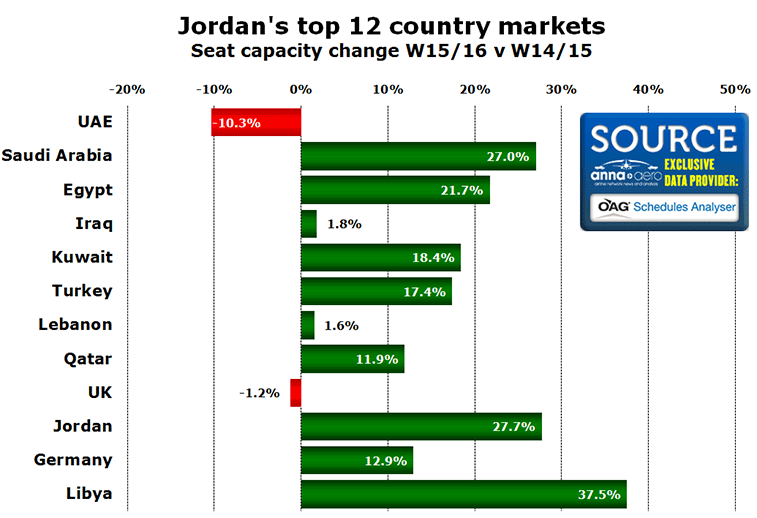 UAE and UK let the team down…

Within Jordan’s top 12 country markets, there are two that have let down the reaming ten, with both the UAE and UK reporting declines in capacity. The UAE market, which is coincidentally the number one market from Jordan, is reporting a decline in seat capacity of just over 10%. This decline comes despite the country market having just welcomed its second route, with flydubai launching services from its second base at Dubai Al Maktoum Airport to Amman on 25 October. In total, eight services operate daily between the two nations, with a breakdown of services explained further in this analysis. The second market to report a decline in capacity within the top 12 is the UK (ninth most popular market), which is down 1.2%. Outside of the top 12, the US (13th) is recording a decrease in capacity of 8.1%, meaning it has left the top 12 from position 10 which it held last year. Replacing it in the top 12 is the domestic market of Jordan, where seat capacity is up just under 28%. Also new to the top 12 is Libya, knocking Bahrain down to 15th position after it witnessed a slump in capacity of over 25%. In total, 34 country markets are served from Jordan, with the domestic market itself serving both airports, while Turkey remains the only international market to be served from both Amman and Aqaba airports. 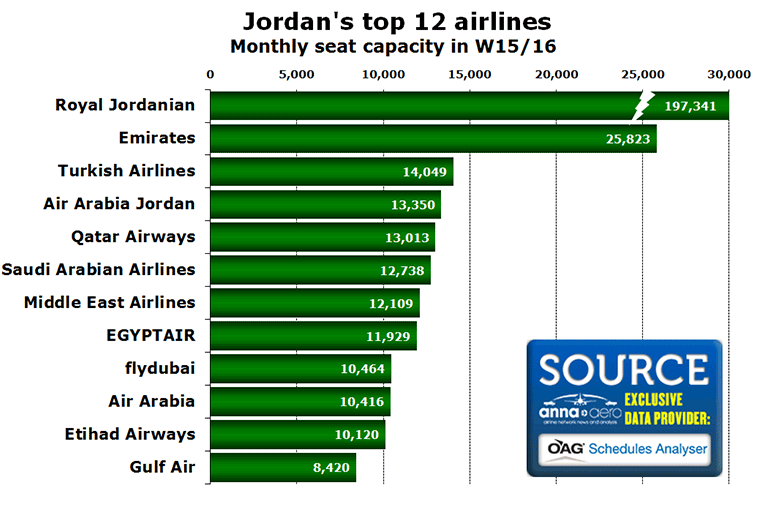 As can be seen from the graph above, it is national carrier Royal Jordanian that rules the majority of capacity in Jordan, 49% to be more precise. During the past 12 months, its hold on the Jordanian market has declined from a 52% majority it held during the W14/15 season. Over the year, the oneworld carrier has grown its seat capacity by 5.8%, helped by the introduction of 787-8s into its fleet. Second placed carrier Emirates has grown by 7.5% while Turkish Airlines in third place is recording a growth in capacity of 9.6%. Jumping straight into fourth position is Air Arabia Jordan which started operations in May of this year. The LCC currently operates to Damman, Erbil, Jeddah, Kuwait City and Sharm el Sheikh. Despite opening its second route to Dubai from Amman, flydubai’s capacity to the UAE has shrunk by 30% over the past year, approximately 3,000 seats. Other carriers in the top 12 that are recording a drop in capacity include Etihad Airways (down 29%) and Gulf Air (6.6%). 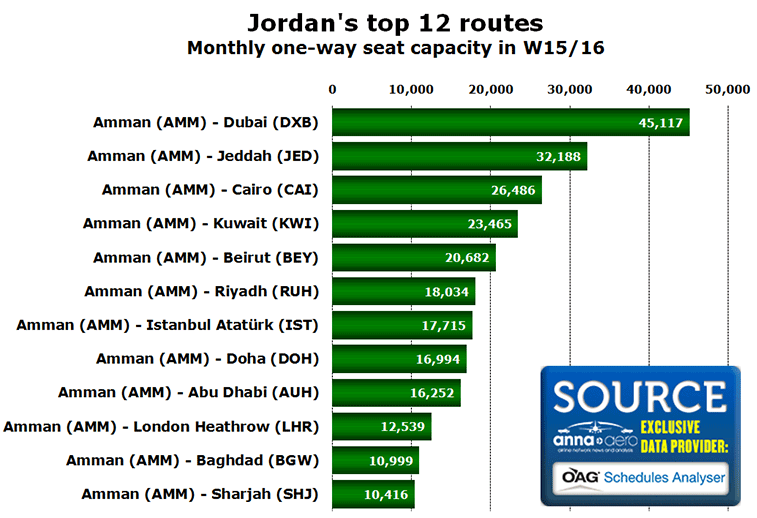 All top 12 routes originate from Amman…..

Amman is home to the top 12 most popular routes from the country of Jordan, with the connection to Dubai being the most popular. The city pair is currently served by Emirates thrice-daily, with Royal Jordanian also operating the same frequency, while LCC flydubai offers a daily service. Although Jordan is served by two commercial airports, Aqaba’s domestic route to Amman is the 18th largest route from Amman, while its service to Istanbul Atatürk is 44th most popular with there being just over 2,000 seats a month being made available between the two airports. In total, there are 59 routes operating to/from Jordan according to OAG Schedules Analyser during W15/16, with the latest being launched on 8 December when Royal Jordanian commenced services between Amman and the Turkish capital, Ankara.

On 15 January, Royal Jordanian will commence services to China from Amman, with the launch of a direct route to Guangzhou. The sector to the Chinese city is currently planned as a tag-on service from its current Bangkok Suvarnabhumi operation. However, the oneworld member does not have the local traffic rights on the second sector between Bangkok and Guangzhou. The route will be flown by the carrier’s 787-8s. The national carrier to Jordan is also expected to re-launch services to Jakarta in Indonesia on 21 December. 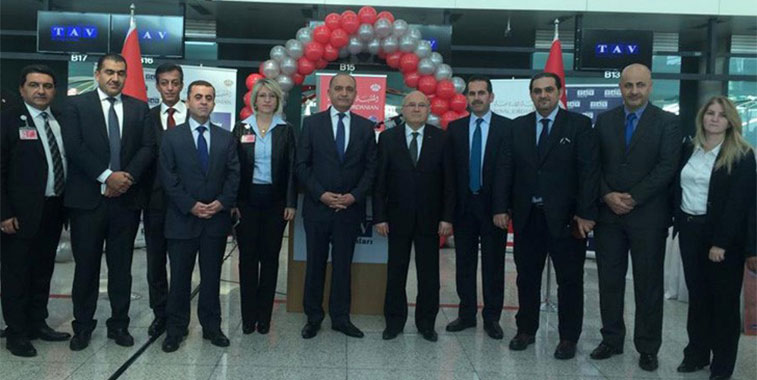 On 8 December, Royal Jordanian commenced operations between Amman and Ankara. The launch has helped contribute to the growth of the Turkish market from Jordan, which this winter is up just over 17%.