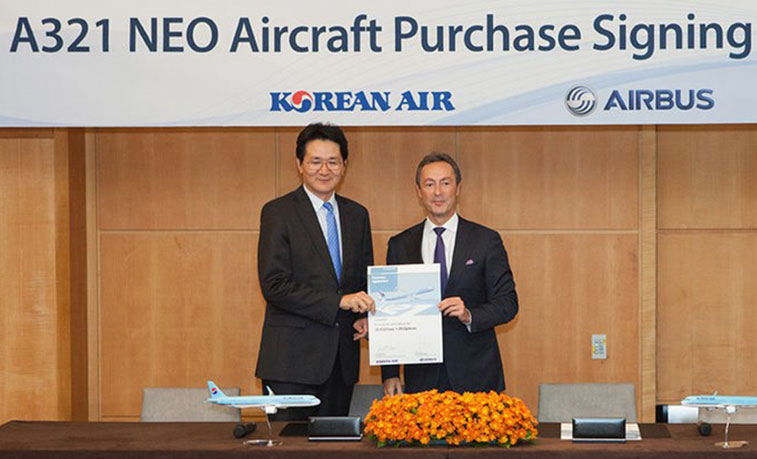 Korean Air signed a contract with Airbus on 6 November covering a firm order for 30 A321neo aircraft plus 20 options, becoming a new customer for the best-selling single aisle A320 Family. The purchase agreement finalises a commitment announced earlier this year and was signed in Seoul by Walter Cho Won Tae, Korean Air EVP, and Fabrice Brégier, Airbus President and CEO. Although the carrier has signed for these new Airbus Aircraft, it has also welcomed another 747-8 into its fleet during November.

Following the 107 airframes which were handed over in October, Airbus and Boeing turned up their delivery performance in November by distributing a total of 132 aircraft to various customers, up 14 units when compared to the corresponding month of last year. Besides this fact, the American manufacturer has extended its lead over its European rival in terms of aircraft delivered in November, by distributing 10 more units to its respective customers. In the same month last year, it is worth noting that Boeing delivered five fewer aircraft than its European rivals. With this, Boeing strengthened its lead in the 2015 delivery race to 147 units, up from 137 in October.

Having delivered more than 100 aircraft for the 10th month in 2015, the two manufacturers have once again recorded an impressive total. The combined deliveries of both producers for the 11th month of the year was 132, of which 71 came from Boeing and 61 from its European counterpart. Notably, the American manufacturer has increased its total deliveries for November when compared to the same month of last year by 15 units. Airbus on the other hand delivered the exact same amount of aircraft last month as it did in November 2014. Overall, 75% of deliveries in November were narrow-body aircraft, with the remaining 25% being wide-body units. However, when looking solely at the wide-body market, Boeing produced 67% of the aircraft, up from the 61% majority share it held over Airbus last month. 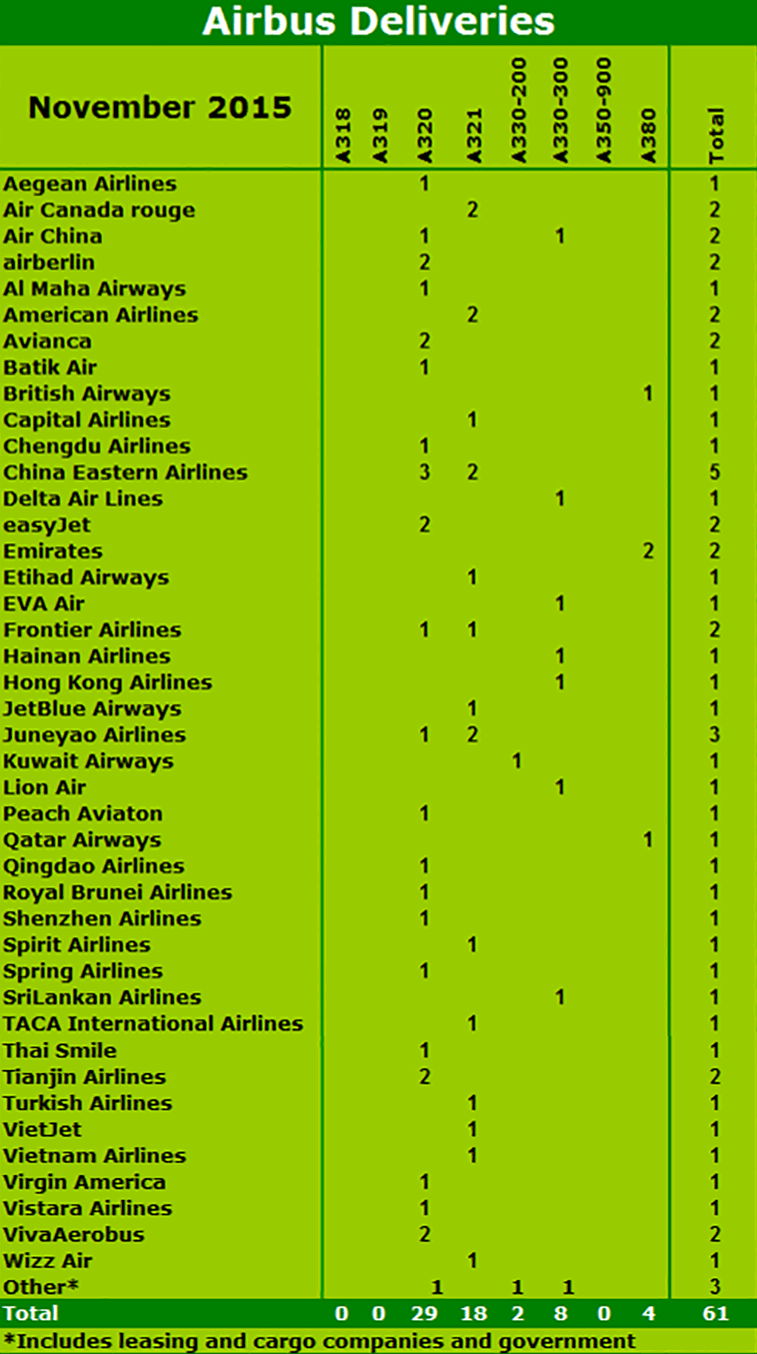 Airbus ended November with a total of 61 units being delivered to airlines, which is 12 more airframes than what the company delivered in October, and equal to that delivered by the European manufacturer in the same month of last year. Over the period of January to November 2015, the European producer has delivered 556 units, representing an increase of just two units on the same time period in 2014.

For the month of November, single-aisle deliveries were led by the A320 (29 units), while the A321 followed in second place (18 units), with a grand total of 47 single-aisle aircraft being provided to carriers around the world (up 10 when compared to last month). This means that Airbus produced four more narrow-body aircraft than Boeing in November. A total of 20 airlines received A320s last month, with one also going to a private buyer. In relation to A321 deliveries, 14 airlines picked up the variant, with Air Canada rouge, American Airlines, China Eastern Airlines and Juneyao Airlines each collecting two of the type.

Looking at wide-body deliveries, Airbus handed over 14 airframes in November, two more units than October, but one less than the corresponding month of 2014. Following on from the delivery of two A380s in October, the European producer handed over four in November, with two going to Emirates, the world’s largest A380 operator. While October witnessed four A350-900s being delivered, including one going to Finnair, the first European operator of the type, during November not one of the new machines was delivered. 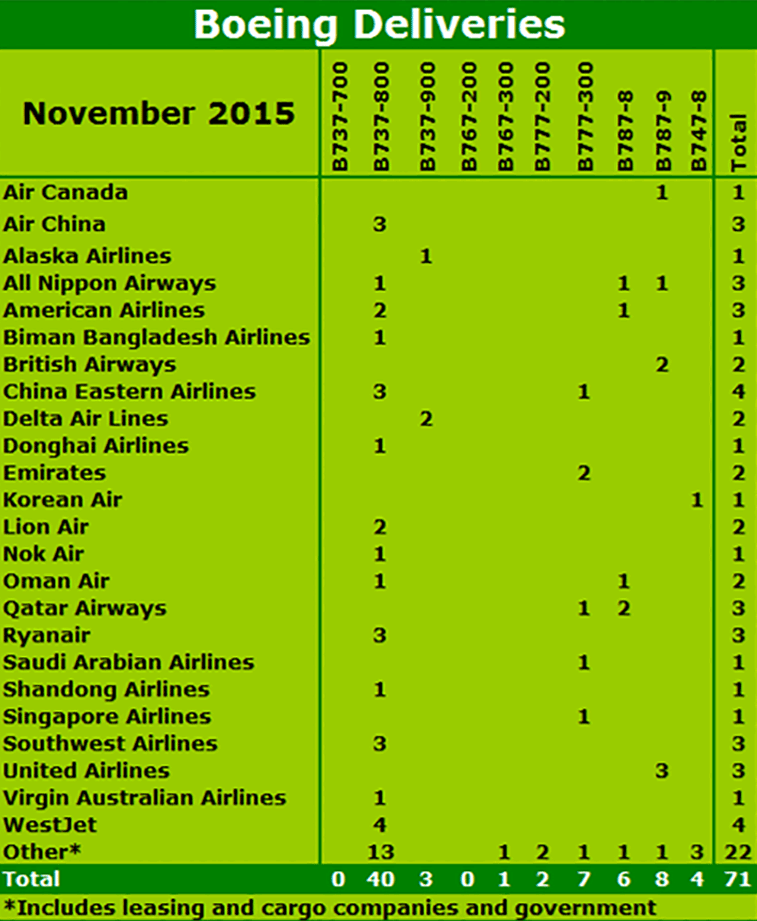 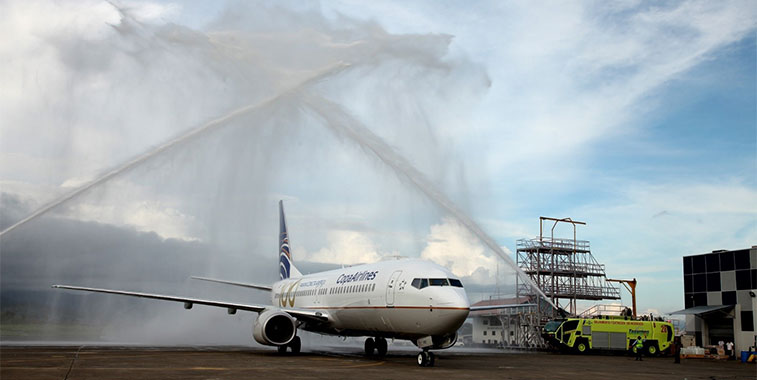 On 20 November, Copa Airlines welcomed its 100th aircraft into its fleet with the 737-800 receiving a water arch salute as it arrived in Panama City. Pedro Heilbron, CEO of Copa Airlines, commented on the milestone by saying: “We are proud to celebrate this historic achievement for our company and for the country – a result of the efforts of our more than 9,000 dedicated co-workers, and the support of our customers, suppliers, partners and government entities.”

Boeing closed November with a total of 71 deliveries, 13 more than in October, and 15 more than in the the same month of 2014. Nevertheless, the American producer’s total for the first eleven months of 2015 is 705 aircraft, an impressive 59 units more than in the same period of last year.

Airlines received a total of 43 single-aisle units from Boeing in November, four more than in October, and one more than in the same month of last year. Canadian carrier WestJet was the largest recipient of the 737-800 model in November, picking up four of the variant. In total, 16 airlines received single-aisle units from the American manufacturer during November, one more than in October. Nonetheless, it should be noted that 13 of the deliveries for the 737-800 were to leasing companies, the same as it was in October and also September.