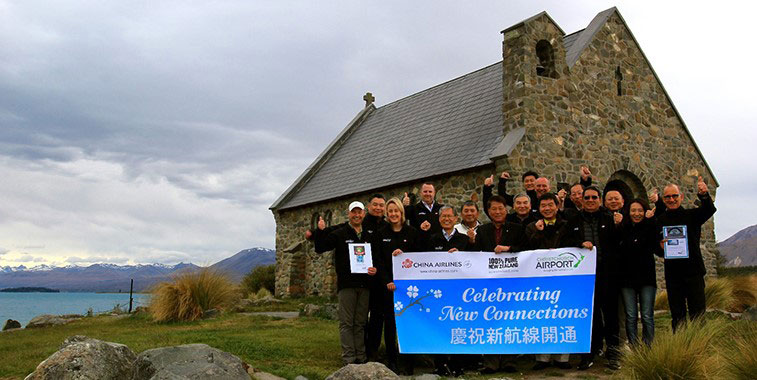 Thumbs up for the New Zealand market. Christchurch Airport received the prestigious Cake of the Week certificate when China Airlines launched services from Taipei Taoyuan (via Sydney) in 2014. Matthew Findlay (far left), recently GM Airlines and Alliances at the New Zealand airport says “that ‘pack’ mentality [of industry stakeholders working together when offering the New Zealand product] has aided the growth volumes now being delivered.”

anna.aero’s editor Marc Watkins had the perfect excuse to escape the Northern Hemisphere winter, (at least by phone) by interviewing Matthew Findlay, recently GM Airlines and Alliances at Christchurch Airport on his thoughts on his local market. And New Zealand is hot right now! Not just in temperature, but the whole visitor economy is on fire. A strong brand, vibrant economy and attractive visitor proposition combine to create a market that has had a recent step-change in visitor arrivals. Growth in international visitor arrivals over the last few years has averaged near 4%, but is now averaging over 8%. And the locals are travelling just as much too, as the positive economic mood music encourages more air travel. So how has this remote nation of 4 million people (not sheep – that’s almost 10 times as many) grown its share of world traffic volumes? Well, Findlay seemed the perfect person to ask. Credited with creatively engaging airlines with strategies that benefit both airline and airport or the region, Findlay is renowned for delivering business opportunities and an upside to airlines that secures long-term benefits for all stakeholders. So he’s well worth having a (virtual) Christmas fireside chat with…

anna.aero: What has led to this new growth phase for New Zealand?

Matthew Findlay: A number of circumstances have arisen to give New Zealand the boost in visitor arrivals, some of which have been a blessing in disguise. There has been a gradual awareness that air capacity is an enabler to providing the platform for growth, so long as it’s followed by demand that fills that capacity. In addition, as Christopher Luxon, Air New Zealand CEO has coined the phrase, New Zealand product offerings and other industry stakeholders need to “hunt as a pack” more often. We’re now aligned as an industry more than ever before, encompassing airlines, airports, product offerings and government at all levels. That ‘pack’ mentality has aided the growth volumes now being delivered. In addition, the uncompromising attraction of New Zealand has not changed – what’s more captivating than the best food and wine accessible from the Wellington region, amazing scenery from Queenstown and incredible wildlife that’s abundant in and around New Zealand’s coastline. Unfortunate incidents elsewhere have also favoured New Zealand as a safe destination to visit.

aa: Is this rate of growth likely to accelerate or slow?

MF: Great question! Where is my crystal ball? Too many factors are at play in respect to each market which make up our total market arrival volumes. Overall, as Boeing has articulated well, and a view that I prescribe to too, a large proportion of our market is dependent on consumer confidence. If you’re comfortable or confident in your circumstances of employment or prosperity, you are more likely to travel. In the various economies of the world, where this aspect is trending positively, outbound travel is likely to be positive, and so too is arrivals. New Zealand’s passenger volume growth, is therefore expected to be positive, so long as capacity is provided. But I think growth is likely to moderate somewhat as New Zealand is generally considered more of a leisure destination, and the tyranny of distance continues, in some respect, to punish New Zealand as a destination. That said, Jetstar Airways’ regional flying led by David Hall and Grant Kerr and their desire to improve airline offerings to a wider flying public will underscore continued growth in airport passenger volumes and choices for consumers in this part of the world. Regional competition in the under 60-seat market is also contributing to growth.

aa: With so much momentum, how does an airport or region sustain or continue to grow?

MF: Easy! Remain engaged and take nothing for granted. Growth is not perpetual. The moment you become complacent, someone else will take your growth opportunity. Ultimately, airlines have a relocatable asset, airports don’t. To retain an airlines interest, you’ve got to remain engaged. Are load factors sufficiently high enough? Are yields where they need to be? Is the route offering competitive? If, for each route, you don’t know these basic answers, anything and everything could be at risk – especially if you’re facing economic downturns or another calamity (aa: Like an earthquake? MF: exactly!).

aa: In your opinion, which airports or regions do you think do it well?

MF: That’s a question I constantly ask my airline partners and also have asked past research companies we employ, like Christchurch-based Research First. How can we improve? What are others doing we should be doing? At the end of the day, to increase at above average growth rates, what does it take to achieve a continuous step change in growth? Research aids us in making those decisions. Today, a number of airlines and regions do a great job of marketing their destination. A few come to mind, that I think have done very well, such as Gold Coast, Australia, Vancouver and Birmingham, UK. Each airport or region, has a brand that can be adaptable for a number of reasons or has creatively made themselves attractive for airlines, above their peer group – internationally. And that’s where we are competing – for capacity at an international level. But a number of airports/regions have each done things I’ve thought separately is clever. Sydney for instance, a number of years ago, used a surfboard to get attention for a specific promotion they had, which I thought was unique. Another that stood out for me in the past was the Cake of the Week! The more interesting each cake got, the more compelling it became to create something special. The next one I do will of course be entered into anna.aero’s fantastic competition.

aa: Gee…thanks Matt. We love it too. Anyway, where do you see New Zealand competing in the global market?

MF: Everywhere! Luckily for our small country, we have a lot to offer in a small space. And our credentials as a film destination means so much of the country is featured in a global market place. We could feature anywhere – the question is – will we remain competitive enough to remain relevant, when the visitor’s dollar could go anywhere?

MF: War; terrorsim; SARS; foot and mouth…you name it, and it could pose a risk. My biggest fear would be the gradual decline in the prosperity of our core offshore markets and an event in New Zealand which would worry offshore visitors, such as a human or natural disaster. These however are the same in any market, so a local problem to overcome is complacency and an overconfidence that the good times are here to stay. An arrogance to some extent. Our service levels must remain high and ensuring our visitor expectations remain high and delivery is matched at those levels.

Just after this interview, Findlay confirmed that he was staying in the industry and that he might yet see his friends and colleagues at Routes Asia in Manila in March. He couldn’t say anymore, but all will become clear early next year. 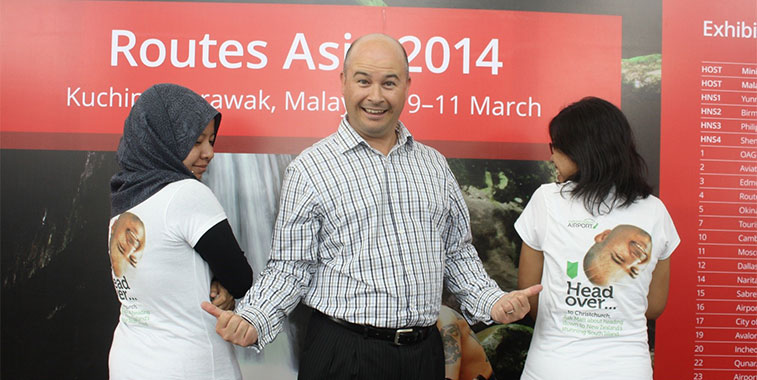 Matthew Findlay was recently General Manager Airlines and Alliances at Christchurch Airport. Credited with creatively engaging airlines with strategies that benefit both airline and airport or the region, Findlay is renowned for delivering business opportunities and an upside to airlines that secures long term benefits for all stakeholders. He also shrewdly used anna.aero as a marketing tool to his target airlines – such as sponsoring the show daily magazine distribution team at Routes Asia in Kuching.