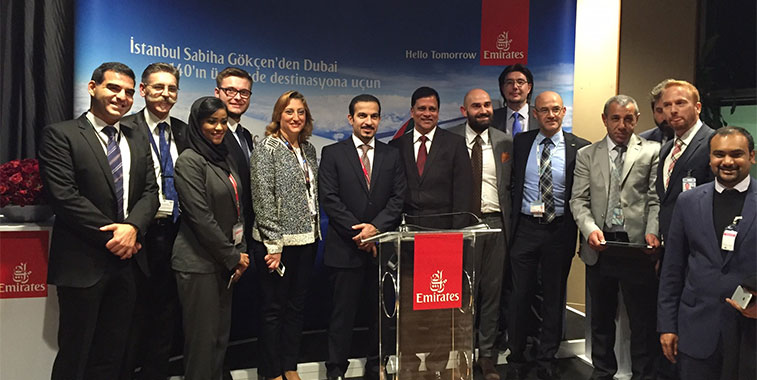 Can you spot anna.aero? This photo was originally meant to be just anna.aero’s Assistant Editor, Jonathan Ford (fourth from left) and Istanbul Sabiha Gökçen’s Aviation Marketing Manager, Aytun Demiral (fifth from left), however it then appeared that Emirates wanted a piece of the action and before you know it the whole airline team is on the stage posing for their photo as well. anna.aero gives the team 10/10 for their enthusiasm.

On 15 December, Emirates commenced services to its second destination in Turkey, Istanbul Sabiha Gökçen. The MEB3 carrier will operate services from Dubai daily, complementing the airline’s current services to Istanbul Atatürk which is served 11 times weekly. Istanbul becomes the third city in the world, after London and Tokyo, to have two of its airports served by Emirates. During a conversation with Istanbul Sabiha Gökçen’s Aviation Marketing Manager, Aytun Demiral, at the recent IATA Slot Conference in Singapore, anna.aero’s Jonathan Ford was warmly welcomed to join them at the launch of the carrier’s service to the airport. As a result, Ford was soon on his way to Istanbul to welcome Emirates.

Emirates will operate services to Sabiha Gökçen using its A330-200s with a three-class configuration, meaning that the carrier becomes the first wide-body passenger operator to serve the facility. Flight EK119 leaves Dubai at 17:15, arriving into Sabiha Gökçen at 20:15 local time. The return flight, EK120, leaves from Turkey at 22:05, arriving back into Dubai at 04:20 the following morning. The route to Dubai is already served by flydubai and Pegasus Airlines from Sabiha Gökçen, and not long after Emirates announced this route, Turkish Airlines also announced it was to serve the airport pair, with its services launching on 24 December.

Sabiha Gökçen becomes the 133rd destination on the Emirates route map, and the second in Turkey behind Atatürk, which was the ninth destination on the carrier’s route network, launched in 1987. Services to Sabiha Gökçen have been in the planning for five years, however bilateral agreements between Turkey and UAE have meant that it has taken some time for the service to come to fruition. However, an agreement was reached back in October allowing the carrier to put the service into place. 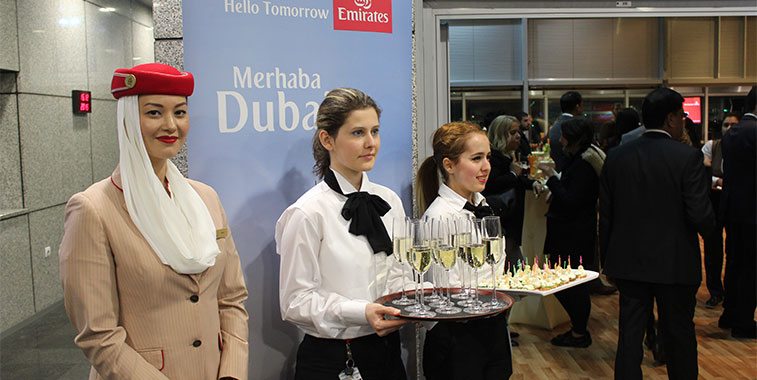 The location for the inauguration ceremony of Emirates’ new service was the old general aviation terminal at Istanbul Sabiha Gökçen. The building is now used as a VIP terminal. On arrival, delegates were welcomed to the ceremonial suite with a class of champagne, canapes and a warm smile from one of the Emirates crew. While waiting for the flight to arrive from Dubai, delegates were able to mingle and also pose for photos. 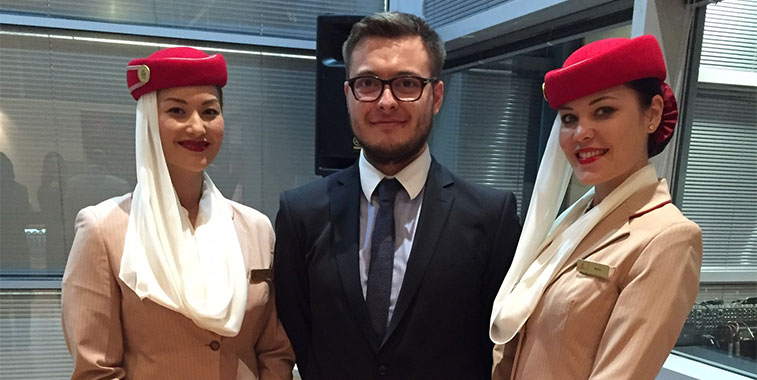 Too tempting to resist. anna.aero’s Jonathan Ford has flown with Emirates multiple times during 2015, so when the opportunity arose for him to have a chance to have his photo taken with two of the companies air crew, he just could not resist. Soon after this photo was taken, it was time to head outside to welcome the arrival of the aircraft from Dubai. Istanbul Sabiha Gökçen’s first attempt at a wide-body water arch salute was proven to be very successful, especially as it is an airport which is mainly used to the 737-800 and A320 on its routes launches. anna.aero’s Assistant Editor has one simple rule of thumb when it comes to scoring entries for the Arch of Triumph competition, if he is there in person you automatically get a high score. This effort for the arrival of Emirates has proven to be worthy of a high score for many reasons, but especially due to the fact that the airport’s fire department has stepped its game up to the next level with regards to water arch salutes, the wide-body arch. See how this FTWA compares to others from around the world. After the water arch, came the speeches ceremony, with the first speaker being Bahar Birinci, Emirates’ Turkey, Romania and Bulgaria Manager. She spoke of her pride in Emirates finally being able to launch this service, and also of the Turkish Aviation Authority in being able to develop an agreement with the UAE to allow this route to operate. The pride that she showed in Emirates became emotional for Birinci, with the crowd supporting her. The next speaker at the event was Adnan Kazim, Emirates Divisional SVP, Strategic Planning, Revenue Optimization & Aeropolitical Affairs, who had arrived from Dubai on the inaugural flight. Commenting at the launch, he spoke about the fast growing development of Istanbul Sabiha Gökçen and how well the airport has managed to bring everything needed together so quickly due to the route being announced only one and a half months previous: “Sabiha Gökçen is a fast growing airport, and we thank them for their extreme generosity. Emirates is the first international wide-body carrier to arrive at this airport, and it has taken us five years to make this route a reality. With this new daily service from Dubai, we will operate a total of 18 weekly flights to Istanbul, with this operation complementing our current services at Istanbul Atatürk. We have started services to the Asian side of Istanbul in order to become attractive to more passengers in this part of the city. Atatürk was the ninth destination on the Emirates network, today we have launched our 133rd. We believe the strengthening of links between Turkey and the UAE will help support trade growth, especially to the 500 based Turkish companies in the UAE.” The next speaker to the podium was Gokhan Bugday, CEO, Sabiha Gökçen International Airport. He commented at the launch with by saying: “Emirates is an important part of the global aviation sector today, and it is a great moment for us in welcoming them to our airport. It is also a great opportunity in opening up new options for our east-bound passengers. We extend our gratitude to Emirates in growing their operations from Istanbul and making this route a reality. This year we expect 28 million passengers to fly through Sabiha Gökçen and Emirates’ launch signifies yet another important and exciting milestone for us.” After the speeches had been made, Birinci announced the route officially open and welcomed everybody to witness the gift giving ceremony. The airport presented the Emirates team with special tile plaques. 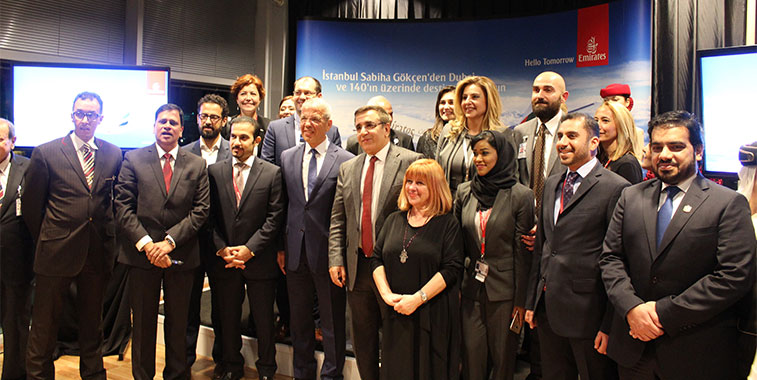 Time for the group shot. Birinci gathered all of the Emirates team together for them to have a massive group shot to remember the launch by. This was then followed by the news that it was time for the cake cutting ceremony…anna.aero’s favourite moment. The cake presented at the launch was similar to the traditional style seen at the majority of Emirates route launches – a large sponge cake draped in elegant white icing. The cake was cut by the team from Emirates and also a few of the airport’s executives. anna.aero can confirm that it tasted excellent. 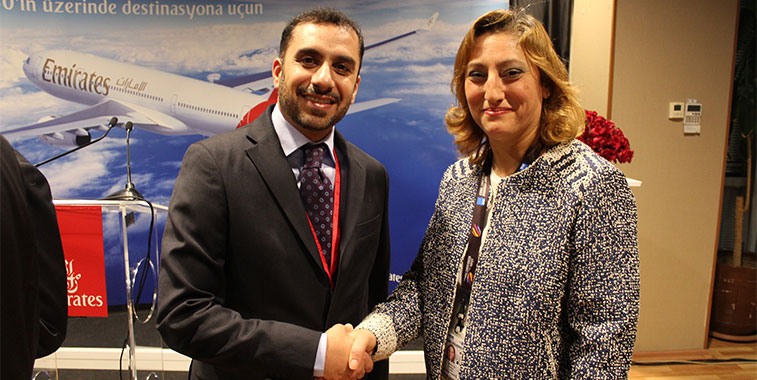 Deal done! Emirates’ Divisional SVP, Strategic Planning, Revenue Optimization & Aeropolitical Affairs, Adnan Kazim, shakes hands with Istanbul Sabiha Gökçen’ Aviation Marketing Manager, Aytun Demiral. Demiral spoke to anna.aero at the recent IATA Slot Conference in Singapore where she said that: “We have known for some time that Emirates has wanted to add this service and they already had an aircraft scheduled to serve this route, so it was just a matter of time waiting for Turkey to finalise the air service agreement in October.” 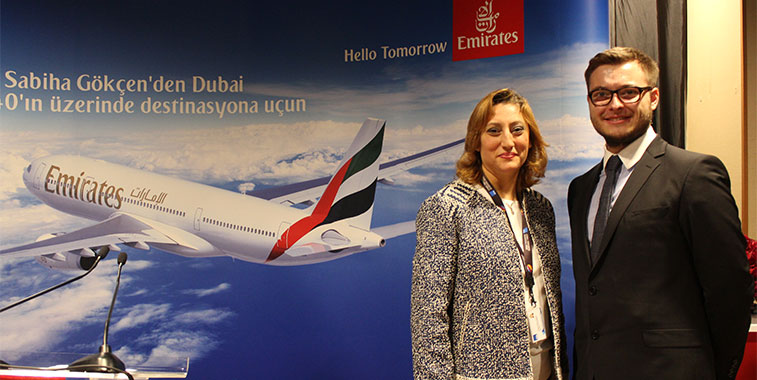 anna.aero’s Jonathan Ford would like to thank Aytun Demiral for allowing him to be part of the airport’s historic day in welcoming its first scheduled wide-body carrier. He would also like to thank Emirates in being such great hosts and especially Seçkin Çetin, who also played a great part in welcoming anna.aero to Istanbul.