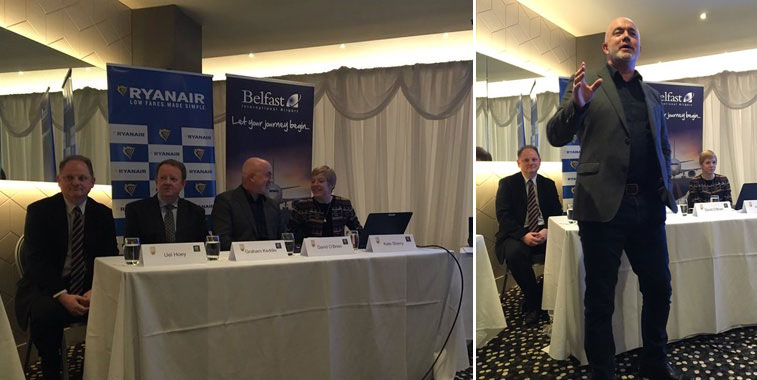 On 7 January, Ryanair announced that it is to open a new base at Belfast International Airport in Northern Ireland with operations commencing on 27 March, initially with a four times daily service to London Gatwick, a route which will face direct competition from easyJet. Speaking in Belfast, David O’Brien, Ryanair CCO, said: “Our four times daily Belfast – London Gatwick service will be ideal for both business and leisure customers and we look forward to growing routes, traffic, jobs and tourism in Belfast in the coming months and years.”

On 7 January, Ryanair announced that it will open base #77 at Belfast International Airport in Northern Ireland, initially with one based aircraft serving a four times daily service to London Gatwick. This will then be followed by a further two aircraft in October and a further five routes (yet to be announced). Speaking at a press conference in Belfast, David O’Brien, Ryanair CCO, said: “Ryanair is pleased to open a new base at Belfast International Airport from March, as we invest $300m, in three based 737-800s, and a high frequency daily route to London Gatwick, and five other new routes from October 2016, which will deliver over one million passengers per annum.”

Following this announcement what remains a hot topic is where the other five ‘to be announced’ routes are going to be to. Ryanair last served Belfast in 2010, when it had a base at Belfast City Airport with one aircraft and services to London Stansted, Bristol, East Midlands, Liverpool and Glasgow Prestwick. Back in 2010, the airline served around 800,000 passengers per year from the city, however the carrier decided to close the base following the airport’s confirmation that a public inquiry into a planned runway extension would be further delayed. At the time, Ryanair’s CEO Michael O’Leary said that: “It is very disappointing that the promised runway extension at Belfast City Airport has still not materialised more than three years after we opened the base at Belfast City”. It was reported when the base opened in 2007 that Ryanair would be looking to serve international routes from the airport once the extension was complete, however none ever happened. So with a return to the city, this time at Belfast International, which has a long enough runway to serve Europe (07/25 is nearly 2,800 metres long), it is very likely that some of the five promised routes will be international. Assuming the further two based aircraft each operate three rotations per day, the two aircraft will be able to offer 42 weekly departures.

As stated, the first route to be served is London Gatwick with an initial four times daily service, which is 5,292 weekly one-way seats. Based on OAG Schedules Analyser data for the week commencing 27 March, Ryanair’s new service will occupy 18% of the Belfast to London market, with the airline being in third position behind easyJet (46%) and British Airways (20%). Aer Lingus makes up 10% of the market on its Belfast City – London Heathrow route while Flybe occupies the final 6% with its services between Belfast City and London City. Based on the Belfast International – London Gatwick route alone, Ryanair will have 49% of weekly seat capacity, doubling the market size, with easyJet occupying the remaining 51%. However we know that Aer Lingus currently serves Belfast City from the London airport, meaning that Ryanair is increasing capacity between London Gatwick and Belfast by 21%, once the former withdraws its services.

In the domestic market, of the routes previously served by Ryanair from Belfast, only East Midlands and Glasgow Prestwick are not served directly from Belfast International, with the former last being served by bmibaby back in 2010, before the carrier switched to Belfast City. With this in mind, the first route that anna.aero predicts will be served will be to East Midlands, in direct competition with Flybe’s 25 weekly departures from Belfast City (based on winter timetable as routes are expected to start at commencement of W16/17 season). Also, the route could prove to be competition for easyJet’s service from Belfast International to Birmingham, however Ryanair could choose to go into direct competition, however anna.aero does not think the ULCC will enter direct competition with easyJet initially. The rationale for this is that easyJet have a majority of capacity at Belfast international, with the carrier holding 91% of seat capacity at the start of S16. The reason for London Gatwick being served is because: “Gatwick slots given up by Aer Lingus as part of the IAG takeover are being safeguarded and used for the benefit of Northern Ireland. Gatwick is growing in popularity, and it was crucial to retain them,” says Graham Keddie, MD of Belfast International Airport.

Our data elves think that Glasgow Prestwick will not be served by the ULCC, due to Ryanair’s shrinking operations at the base and it’s doubtful that it will enter the market against easyJet and Flybe which fly to Glasgow. Also, the Scottish city is currently served directly from Northern Ireland by Ryanair with a Londonderry service. The second domestic route which anna.aero predicts that Ryanair will serve from its new base is Leeds Bradford, a route which is not served directly from Belfast International and was last served by Jet2.com back in 2013. With London Stansted being Ryanair’s largest base (and a route which was served from Belfast City when it was a base for the ULCC), it can also not be ruled out, however with the Gatwick services already in place it seems unlikely at this initial stage. 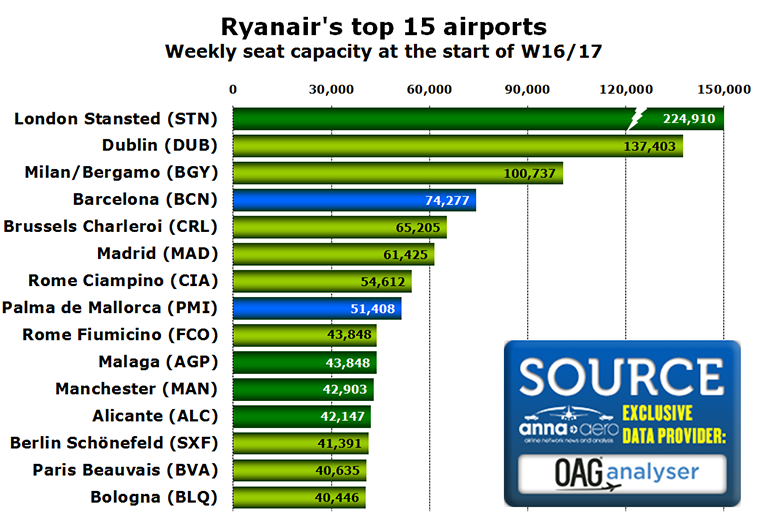 Of Ryanair’s top 15 airports in terms of weekly seats, six are currently served directly from Belfast International, with those highlighted in blue only being seasonal services. Those routes highlighted in light green do not have a direct service to/from Belfast International or Belfast City. The first route that anna.aero predicts will be served is Barcelona. In the peak summer season, easyJet provides four weekly flights between Belfast and the Spanish destination, and with Spain being the number one international market from Belfast, and Barcelona being Ryanair’s largest Spanish hub, it seems an obvious choice for a route, even within the winter season at a low weekly frequency.

One market which is not served directly from Northern Ireland is Germany, with routes to Berlin Schönefeld and Munich last being served in 2011 by easyJet and Aer Lingus respectively. With the route not being served for nearly five years, anna.aero predicts that Ryanair will open the market between Belfast and Germany with a service to Berlin Schönefeld. One of the main reasons for this decision is that the carrier has recently opened at base in the Germany capital. Also figures from the Northern Ireland Statistics and Research Agency indicate that visitors from Germany to Northern Ireland grew by +16% in 2014, so a direct air service is increasingly more attractive to prospective airlines.

anna.aero predicts that the final route will go to either Milan/Bergamo, Rome (Ciampino or Fiumicino) or Brussels (Charleroi or Zaventem). Brussels Airlines will from March introduce a new service to Belfast City from Brussels Airport, however with Ryanair’s new “Always Getting Better” programme and business friendly model, it may watch to see how this new service will perform before thinking about entering the market. Milan and Rome are currently not served directly from Northern Ireland and with Rome Fiumicino last being served in 2011 from Belfast International, anna.aero predicts that the Irish LCC may consider restabilising a market between the two cities.

We will of course be the first to tell you if any of our route predictions prove to be correct. And the data elf which did this research will get double rations that week. Watch this space!