It’s a tie! (No, it’s a giant clog). Europe’s two biggest low-cost carriers both started 99 new routes in 2015, just ahead of Vueling (90) and Wizz Air (85). While Ryanair opened a major new base in Berlin in October, easyJet made Amsterdam a designated base earlier in 2015. anna.aero identified over 3,100 new routes started by airlines in last year, of which 44% were already operated by at least one other carrier.

According to anna.aero’s New Route Database, 359 of the world’s airlines launched over 3,100 new services across 173 countries in 2015, which works out as an average of almost 60 new services per week. This is over 500 more than we logged in 2014. No wonder our data elves were happy to have a few days off over Christmas. Around 44% of these new services were on routes (airport pairs) already operated by at least one other carrier, while the remainder (around 1,760) were genuinely new routes. The average frequency of the services launched where there was competition, was 4.8 flights per week (down from 5.8 in 2014), while on the genuinely new routes the average weekly frequency was just 3.4 (down from 3.9 in 2014).

easyJet and Ryanair tied for most new routes launched 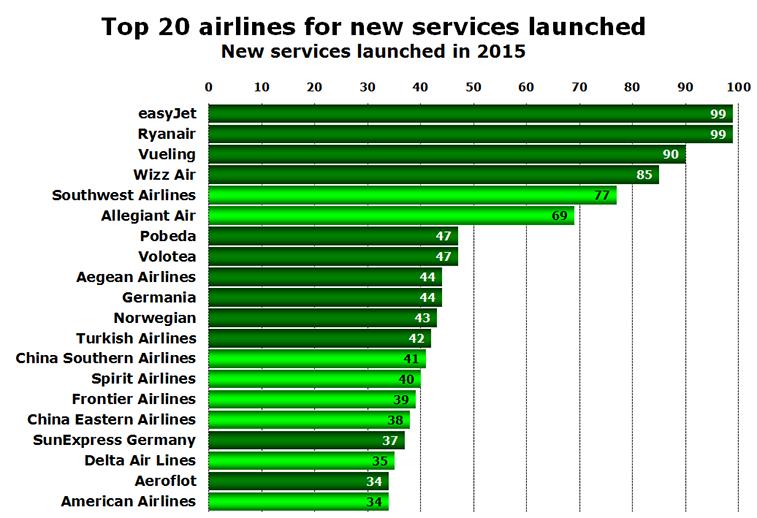 European carriers (in dark green) took 10 of the top 12 places despite sluggish economic growth across much of the region. The only two non-European carriers among the top 12 were Southwest Airlines and Allegiant Air, both from the US. In seventh place is Russian LCC (and Aeroflot subsidiary) Pobeda, an airline that only launched services at the end of 2014. The leading legacy carriers are Turkish Airlines, China Southern Airlines, China Eastern Airlines, Delta Air Lines, Aeroflot and American Airlines.

The 3,141 new services in our database involve 6,282 airports, one at each end of the route. Analysis by country reveals that despite relatively modest traffic growth, US airports still welcomed more than double the number of new services in 2015 than the airports of any other country. This was also true in 2014. Then come Russia and China, followed by Europe’s five ‘FIGUS’ countries. Among these, Spain beat the UK, Germany, Italy and France for new services. European countries (in dark green) scooped eight of the top 10 positions. Apart from the US and China, the leading non-European countries were Japan (11th), Canada (12th), India (13th), Mexico (14th) and Thailand (15th). 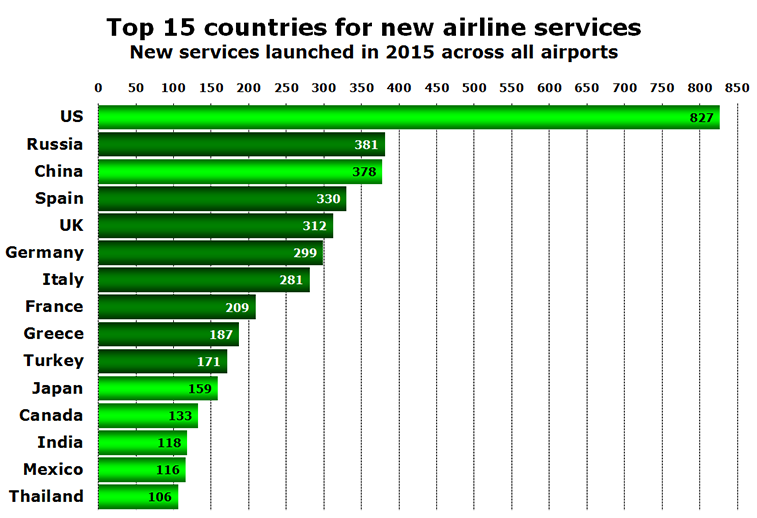 Just outside the top 15 were Brazil, Switzerland, Vietnam, UAE, Australia, South Korea and Indonesia. All of these countries saw at least 60 new air services launched from their airports.

Analysis of which new services launched with the highest initial frequency reveals that Air Europa’s decision to launch flights from Palma de Mallorca to both Ibiza and Menorca on 1 May with 41 weekly flights made these the busiest new routes of 2015. Iberia was already serving both routes with airberlin also competing on the Ibiza service. Delta’s decision to launch service between Seattle-Tacoma and Denver in early June with 35 weekly flights (against Alaska Airlines, Frontier Airlines, Southwest Airlines and United Airlines) made it the biggest new North American route. Another route started with 35 weekly flights was Aeroflot’s Moscow Domodedovo to Simferopol service which began at the start of the winter season at the end of October.

In 2013 more new services were started with Boeing than with Airbus aircraft, but in 2014 this pattern was reversed with almost 1,000 routes started by airlines operating the aircraft produced by the European manufacturer, and just under 900 routes started by airlines operating aircraft produced by the US manufacturer. In 2015 Boeing regained the upper hand, with its aircraft being used to launch 1,249 new routes, while Airbus aircraft were involved in 1,225 route launches. Among turboprop manufacturers ATR (with 85 new routes) just beat Bombardier (with 78 new routes).

As we start 2016, our New Route Database currently has details of 1,100 new services that are scheduled to start before the end of the year. These are being flown by 170 airlines. This time last year the corresponding figures were 1,000 and 160, suggesting that 2016 is indeed going to be another record year for airline route launches. A total of 12 airlines have already indicated their intention to start over 20 new services this year with easyJet, Ryanair, Vueling, Wizz Air and Volotea leading the way, followed by Thomson Airways, Transavia and American Airlines.

Ryanair has so far announced plans to open three new bases in 2016; in Santiago de Compostela (Spain), Corfu (Greece) and Ibiza (Spain), though only one aircraft will be based at each of these airports. easyJet will open its 27th and 28th bases this year at Barcelona and Venice Marco Polo.

Among European flag-carriers Aegean Airlines currently leads the way with network expansion planned in Athens and Kalamata. LOT Polish Airlines, Finnair and SAS each currently plan to add between 15 and 20 new routes to their networks.

Analysis of the MEB3 carriers shows that Qatar Airways has already launched a new route (on 1 January) to Los Angeles with a further six additional destinations planned in 2016. Emirates has so far revealed plans to add a further five destinations from its Dubai hub, while Etihad Airways currently expects to grow its network by just two destinations this year.

This time last year the industry was eagerly anticipating the launch of Vistara in India. The joint venture between India’s Tata Sons and Singapore Airlines has recently celebrated carrying its one millionth passenger and now has almost 2% of the Indian domestic market. Despite unexpectedly low fuel prices, there is little indication that 2016 will see a raft of significant new airlines, apart from a number of new regional carriers in China. However, if this situation changes, be sure that anna.aero will be reporting on those new airlines and the routes they launch.