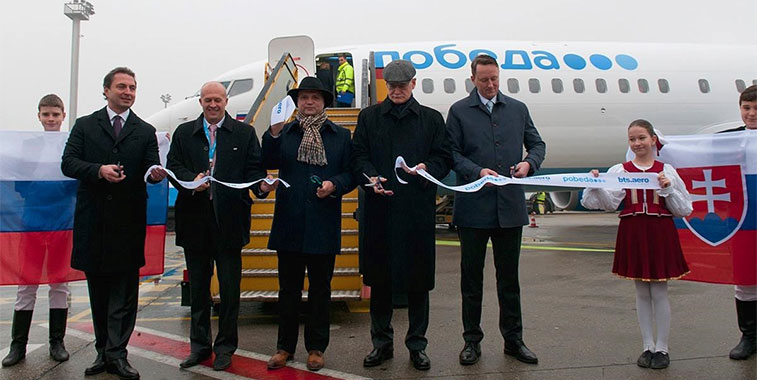 Pobeda goes international. On 19 December Aeroflot’s in-house LCC arrived in Bratislava, where a ceremonial ribbon was cut on the apron. After just over a year of operations, Pobeda launched its first two international routes from Moscow Vnukovo just before Christmas. The airline’s fleet currently comprises 12 189-seat 737-800s.

Following the failure of previous attempts in Russia to operate a low-cost airline (notably SkyExpress and Avianova), the nation’s state-owned flag-carrier, Aeroflot, decided to venture into the market in 2014. Initially the airline was called Dobrolet, but EU sanctions against Russia resulted in the carrier ceasing operations. Dobrolet’s first and main route had been to Simferopol in Crimea, a somewhat provocative choice. When Dobrolet was re-launched as Pobeda at the beginning of December 2014, it had moved its base from Moscow Sheremetyevo to Moscow Vnukovo and Simferopol was no longer a destination in the airline’s network.

Since then the airline has grown rapidly, starting 47 new routes in 2015. Apart from serving some 20-plus destinations with daily flights from its Moscow Vnukovo base, the LCC launched a number of low-frequency seasonal service to Anapa and Sochi/Adler from a variety of Russian destinations. 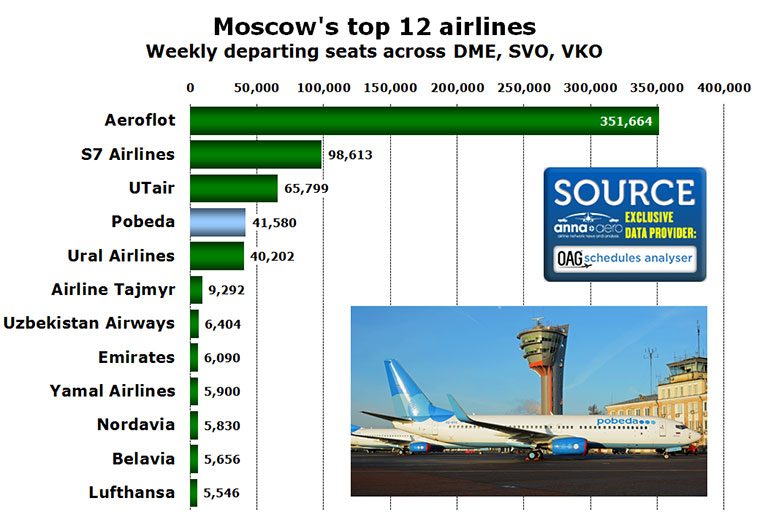 Analysis of the total Moscow market (Domodedovo, Sheremetyevo and Vnukovo) reveals that Pobeda is already the fourth biggest airline by weekly seat capacity, beaten only by its parent company Aeroflot, S7 Airlines and UTair. Pobeda’s share of the Moscow market is currently 5.5%, based on weekly seat capacity. At present the airline operates a fleet of 12 737-800s each configured with 189 seats. All are brand new aircraft acquired from various leasing companies. Eight of these were already with the airline by the end of 2014 with four more aircraft joining the fleet in 2015.

Just before Christmas, Pobeda launched its first international routes. On 19 December Bratislava was served for the first time, while the following day Milan/Bergamo joined the network. Both routes will be served daily and feature among the airline’s top 15 routes from Moscow Vnukovo, as measured by weekly Available Seat Kilometres (ASKs), which takes into account both frequency and sector length. The two international routes are highlighted in bright green. 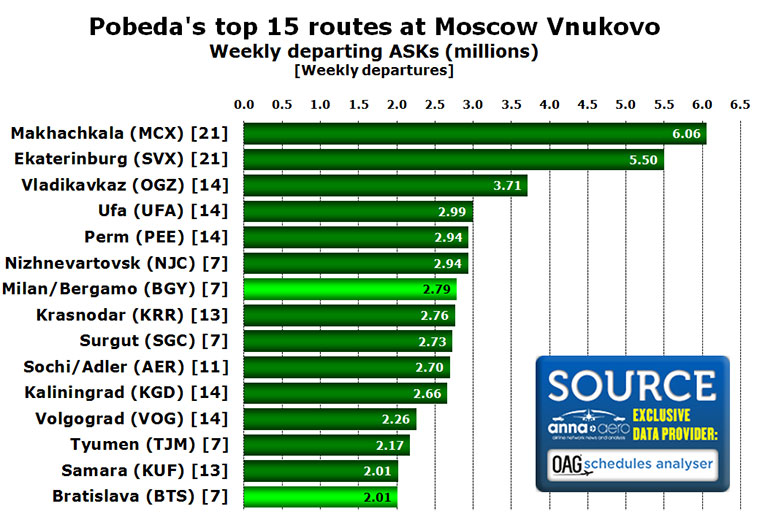 Pobeda’s biggest route by ASKs is to Makhachkala, the capital city of the Republic of Dagestan, located on the western shore of the Caspian Sea. The city is famous for its mosque which can accommodate up to 17,000 people. The local football team, Anzhi Makhachkala, gained global attention in August 2011 when it signed Cameroon striker Samuel Eto’o from Inter Milan, apparently making him the world’s highest-paid player at the time. He then joined Chelsea in 2013. Coincidentally, current Chelsea manager Guus Hiddink was manager at the Russian club between February 2012 and July 2013. This massive cake was baked in Italy to celebrate the launch of Pobeda’s daily service from Moscow Vnukovo to Milan/Bergamo on 20 December. Bratislava flights had been introduced the previous day.