flynas launched its fourth route to Sudan on 5 January, linking Dammam with Khartoum with a four times weekly service. The African nation is the 13th largest country market served from Saudi Arabia, and has grown by 35% in the last 12 months, seeing it climb from 17th spot last January.

anna.aero last analysed the Saudi Arabia (the second largest country market in the Middle East in terms of weekly seats, behind only UAE) country market two years ago in the same week of 2014. Two weeks prior to that analysis, the country’s airports ended 2013 by delivering close to 70 million annual passengers (68.12 million to be exact) ‒ now only two years on, anna.aero’s data elves believe that Saudi Arabia’s airports will deliver 2015 passenger figures above 80 million for the first time, courtesy of average yearly growth since 2003 of 8.2%. 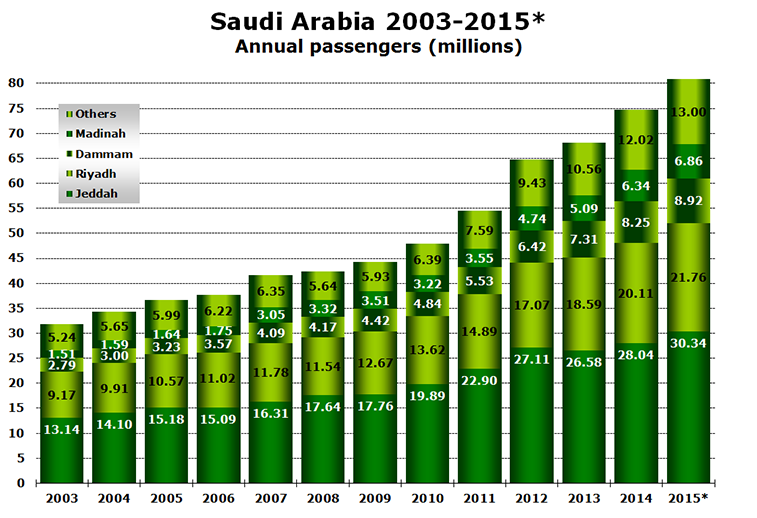 The fallout of recent political events between Saudi Arabia and Iran has abruptly effected weekly seat capacity between the two countries. Last January, weekly capacity between the two countries was 12,128 seats, making it the 13th largest country pair from Saudi Arabia. In the same week this year, there are only 528 weekly seats listed in OAG’s schedules, making it the 43rd largest market, bigger only than Brunei, Thailand, Greece, Somalia and Afghanistan. 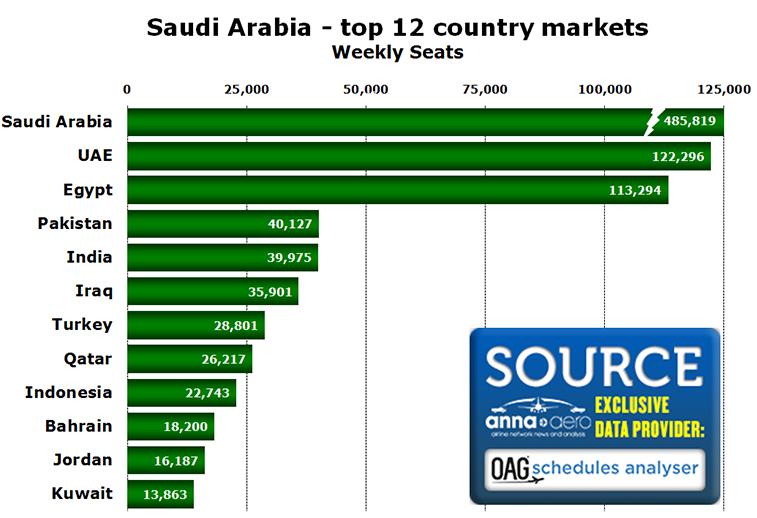 Over the last 12 months, four country markets have been added from Saudi Arabia, when compared to the same week of 2015 – namely Iraq, which has risen from nothing to become the sixth largest market overall, Syria, Thailand and Greece – taking the available country markets up to 48 from 44. The top 12 country markets command 88% of capacity this week in January 2016, up marginally from the 87% result achieved in January 2015. Of the top 12 country markets, Bahrain (+25%) is the fastest growing country market from Saudi Arabia, seeing off similarly-sized annual increases from UAE and Egypt (both +24%). Only two of the largest markets posted any sort of capacity declines, with Kuwait falling by 4% and Turkey by 8% year-on-year.

Since the week commencing 11 January 2015, the number of seats operating from Saudi Arabia during the same week in 2016 has risen by nearly 15%. The number of routes have increased from 303 a year ago to 323 in January 2016. The #1 airport pair between Jeddah and Riyadh has seen its capacity spike by nearly 25% since the same week last year, with nearly 125,000 weekly seats available in 2016, compared to around 100,000 in January 2015. Such is the significance of this route that over one in ten seats offered in Saudi Arabia is now found on this sole city pair. 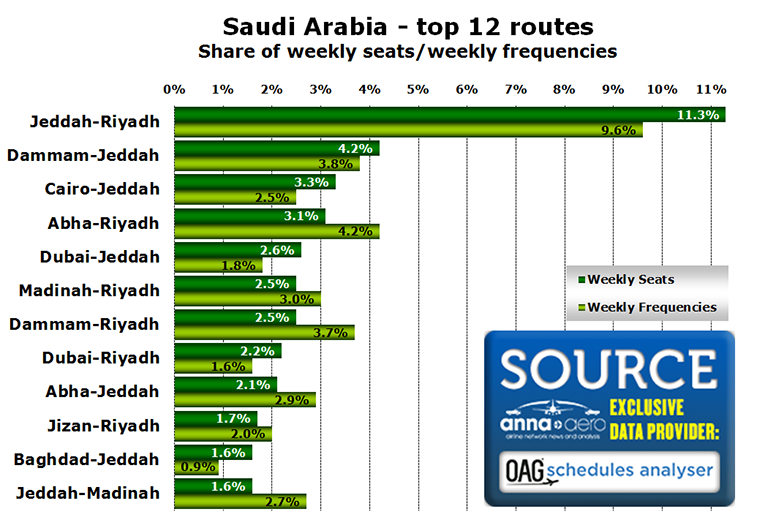 However, the fastest growing route from the top 12 in Saudi Arabia is that of Cairo to Jeddah, which has increased 28% from 28,333 weekly seats to 36,395 this year. Also worthy of note is the Baghdad to Jeddah city pair, which has made it into 11th place, having not been served at all a year ago. Two domestic routes are the only ones found in the top 12 which have seen any sort of capacity cull over the last 12 months. Madinah to Riyadh is down by 2.2%, while seats between Gizan and the capital city have been reduced by 1.6% year-on-year. 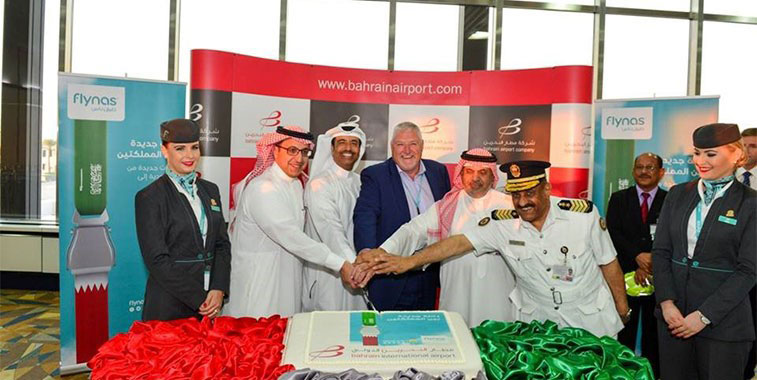 Capacity between Saudi Arabia and Bahrain grew by 25% over the last 12 months, which included the flynas’ thrice-weekly services from Riyadh and Jeddah, which launched on 1 December 2015 and 3 December respectively. Similarly-sized annual increases in weekly seats to UAE and Egypt (both +24%) were also recorded since January 2015.