Baltimore/Washington (BWI) is one of three major airports (with the other two being Washington Dulles and Washington Reagan) to serve the Baltimore – Washington metropolis, which combined has an approximate population size of around 9.4 million (based on 2013 estimates), an increase of around 4.3% from the total of 9.1 million stated in the 2010 census. This makes the Baltimore – Washington region the fourth largest metropolitan area in the US after New York – Newark, Los Angeles – Long Beach and Chicago – Naperville regions. Nonetheless, of the four, the Baltimore – Washington population is growing at the fastest rate (based on the 2013 estimates), with the other three averaging between 1%-3%. This means that the need for growing air travel in the region is perhaps more urgent than the other large metropolitan areas of the US, so the news on 12 January that Allegiant Air will commence six services from BWI, with five of them being new destinations from the airport currently not served by other carriers, is a welcome addition to its network needs. As well as Allegiant Air, two new airlines to the airport last year were Norwegian, which commenced services to two Caribbean destinations, while WOW air launched services to Reykjavik/Keflavik, which increased connectivity options to Europe and adds further competition on British Airways’ year-round European service to its London Heathrow hub. 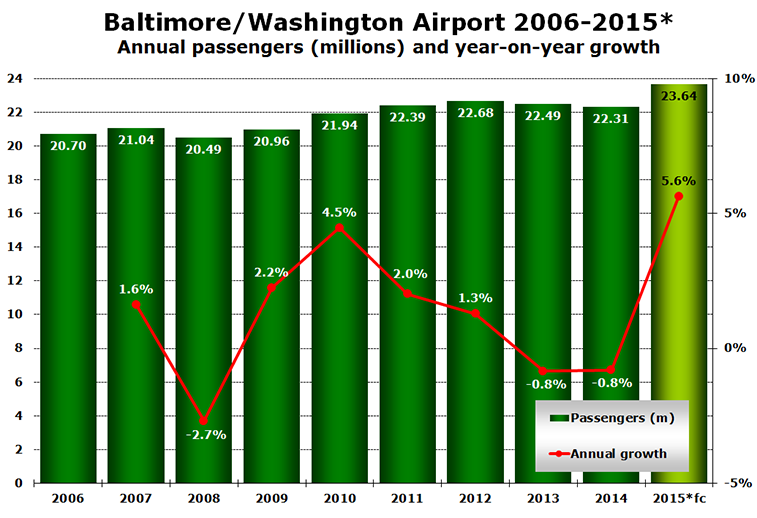 Baltimore/Washington on course to pass 23 million

For the first 10 months of 2015, using passenger traffic statistics available from BWI, the average monthly growth rate is 5.8%, with the airport handling 19.84 million passengers in that period. If we take this average for the remaining two months of last year, then based on 2014 statistics it is expected that the airport should pass 23 million passengers for 2015. Using 2014 monthly data, the airport’s SVID (Seasonal Variation in Demand) score registers at 1.84 which is an “excellent” score, however for 2016 this number will be expected to rise as a result of Allegiant Air expansion. The carrier has stated that four of its six promised new routes will be seasonal (explained in further detail below), meaning it will increase the seasonality of passenger throughput at BWI. 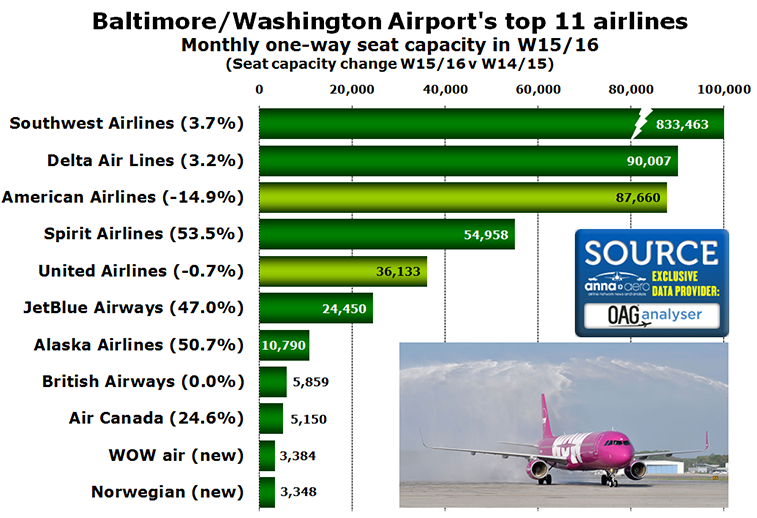 Since January 2015, winter seat capacity at BWI has grown by 6.5%, helped in part by the first winter services of both WOW air and Norwegian. However, if we exclude the result of the airport gaining these two new carriers, seat capacity would still be up by 5.9% with the existing airline mix. Of the airport’s nine existing carriers from last winter, only two have reported declines in seat capacity (both highlighted in light green). American Airlines is reporting a fall of nearly 15%, a consequence of the consolidation of services between American and US Airways as their merger was completed in October. The only other carrier to report a decrease is Star Alliance member United Airlines, which is down just 0.7% (or 245 seats). As it remained last winter, and indeed for a few years previous, Southwest Airlines remains the dominant carrier at BWI with the carrier holding a 72% majority of overall seats available, down from the 74% it held in W14/15. This is a result of the airport welcoming two new carriers, as well as airlines including Spirit Airlines, JetBlue Airways, Alaska Airlines and Air Canada all reporting double-digit growth from the Maryland facility. Although the airport currently has 11 year-round carriers, it is worth noting that Condor does operate a summer seasonal service to Frankfurt.

Allegiant Air to become next carrier to join BWI portfolio

On 12 January, Allegiant Air announced that it will commence operations on six new non-stop services from BWI, namely to Asheville, Cincinnati, Knoxville, Lexington, Savannah and Tulsa. Flights from Cincinnati and Savannah will be year-round operations and are scheduled to start on 29 April. Services to Asheville, Knoxville, Lexington, and Tulsa will be seasonal, with operations to those markets starting in either May or early June. Cincinnati is currently the only destination of the six announced by Allegiant Air which is served from BWI, with Delta Air Lines offering a six times weekly service according to OAG Schedules Analyser data. Commenting on the announcement, Ricky Smith, BWI CEO said: “We welcome Allegiant Air as an excellent addition to BWI Marshall Airport. Allegiant Air will help grow tourism in our market, while adding low airfares and new destinations for our local travellers. We look forward to Allegiant Air’s success here at Baltimore/Washington.” Adding to Smith’s words, Jude Bricker, Allegiant Air SVP of Planning, said: “Allegiant Air is excited to begin services at Baltimore/Washington Airport and offer passengers around the country easy and affordable access to the Baltimore area and Washington D.C. We also look forward to entering the market and showing local travellers Allegiant Air’s unique brand of ultra-low-cost travel.” 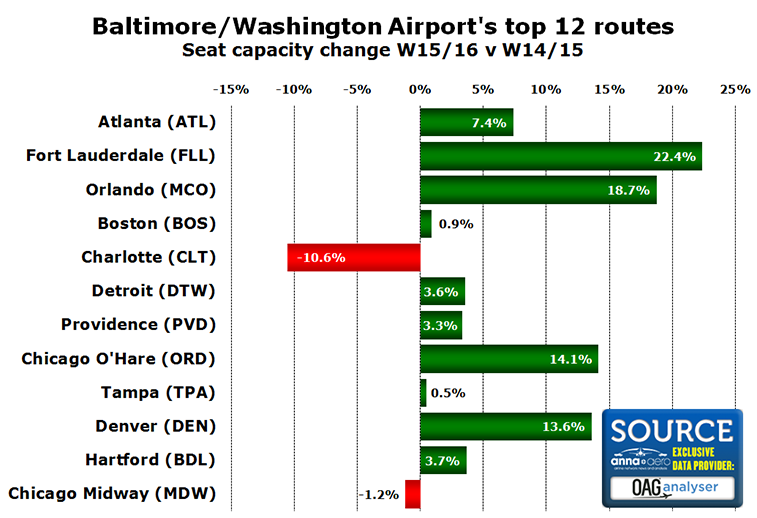 After seeing seat capacity increase by 7.4% (5,486 seats), Atlanta remains the number one route served from BWI. The 928-kilometre sector is served by three carriers, namely Delta Air Lines, Southwest Airlines and Spirit Airlines, with the latter launching services on the airport pair on 18 June last year. However, catching up with Atlanta and recording a growth in seat capacity of just over 22% is Fort Lauderdale. The link to the Floridian gateway has accumulated an additional 15,000 seats in the past 12 months, resulting in the route closing the gap on Atlanta from 14,000 seats last winter to just 4,000 seats in W15/16. Elsewhere, Orlando has overtaken Boston and Charlotte Douglas to become BWI’s third busiest route, helped by JetBlue Airways inaugurating a daily service on 12 November, a day on which the carrier also launched daily services to Fort Lauderdale, helping to contribute to its 22% growth. JetBlue’s expansion to the Floridian hot-spot has seen 9,600 additional seats per month on the city pair with BWI. Outside of the top 12, one route to report a decline in seat capacity is Raleigh-Durham (13th most popular), which is down 4.0%. Another route which is showing a drop in capacity is Dallas/Fort Worth (20th most popular), down over 15%.

Apart from the announcement of Allegiant Air launching services from the airport, Spirit Airlines is also growing by introducing flights to Boston and Detroit from 21 April, adding to the recently launched route to Orlando on 7 January,  which was the first inaugural flight from the airport in 2016. As well as this, Condor will resume seasonal services to Frankfurt. Baltimore/Washington Airport (BWI) on 16 December received its first ever Arch of Triumph certificate for the excellent water salute it held for the arrival of Norwegian’s first services from the facility to Pointe-a-Pitre and Fort de France on 4 and 5 December respectively. It achieved a very respectable score of 34.1 out of 40. Moving forward into 2016, the first route launch of the year from BWI was to Orlando, with Spirit Airlines holding a “Spirit-aneous Giveaway”, which involved prospective passengers giving their name to the airline to be entered into a lucky dip, with a chance to win seats on the first flight to Orlando. The draw of the lucky winner was made by Ricky Smith, BWI CEO.