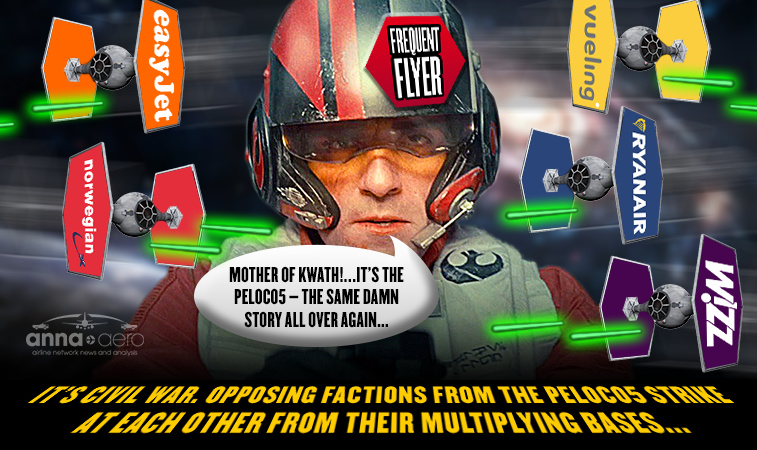 According to anna.aero’s analysis of OAG schedule data, there is growing evidence that Europe’s top five LCCs are increasingly taking each other on as the PELOCO5 (Pan-European LOw-COst 5) have increased the number of routes on which they directly compete by 44% in the last two years.

Europe is blessed with five pan-European LCCs/ULCCs – easyJet, Norwegian, Ryanair, Vueling and Wizz Air  – which for the purposes of this analysis we will refer to as the PELOCO5 (Pan-European LOw-COst 5). All of these operate multiple bases across several different countries. This rules out the likes of Eurowings and Transavia who really only have operational bases (currently) out of one or two countries.

Initially these carriers were content on mostly finding new markets (often from secondary airports) or taking on incumbent legacy carriers. However, with their rapid pan-European expansion there is now growing evidence of these carriers increasingly taking on each other. According to our analysis of OAG Schedule data for the first week of August in 2014, 2015 and 2016 (as currently known) the PELOCO5 carriers have increased the number of airport pairs on which they compete with each other by 44% in the last two years. This compares with overall route growth of 18% during the same period.

Based on the latest data for August 2016 (which is still subject to change) we have identified 231 routes on which at least two of the five PELOCO5 carriers compete head-to-head. However, this still represents just 7.2% of all the airport pairs flown by the PELOCO5 carriers. Of these 231, 17 have three of the five carriers competing for passengers. These are summarised in the following table.

Of these 17 routes, 15 involve at least one airport in Spain, the two exceptions being the Edinburgh to Copenhagen and London Gatwick to Rome Fiumicino routes. In some cases there may be additional non-PELOCO5 carriers operating some of these routes as well. Of the remaining 214 routes on which two of the PELOCO5 carriers compete head-to-head, the most frequent competition is between Ryanair and Vueling. Both airlines have bases in Barcelona, Brussels and Rome Fiumicino. Ryanair and easyJet now compete directly on 42 airport pairs, while passengers have a straight choice between easyJet and Vueling on 34 routes. At present, Wizz Air is managing to avoid competition with fellow PELOCO5 airlines the most, though competition with Ryanair is increasing, with their respective networks now overlapping in Bucharest, Budapest and Vilnius. 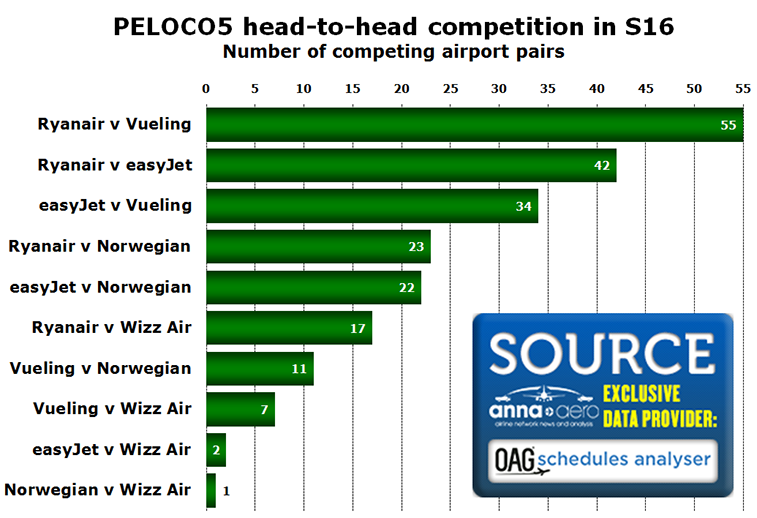 Recent examples of growing competition include Vueling’s decision to start operating flights from Amsterdam and Barcelona to easyJet’s home base of London Luton, while Ryanair will start competing with Wizz Air from the beginning of April on its Vilnius to London Luton service. The start of the W15/16 season saw Norwegian go up against Ryanair (as well as Air Europa and Iberia) on routes from Madrid to Gran Canaria and Tenerife North. Ryanair responded by taking on Norwegian (as well as SAS) on the Budapest to Copenhagen route. The opening of Ryanair’s base at Berlin Schönefeld resulted in a number of new head-to-head confrontations with easyJet, on routes such as Athens, Brussels and Glasgow. The ULCC’s recent announcement of Belfast International as its newest base revealed that the airline’s only route (so far) to London Gatwick would also compete directly with easyJet.

OAG schedule data for August 2016 identifies 231 routes on which at least two of the PELOCO5 carriers compete head-to-head. Although this is just 7.2% of all the airport pairs flown by the five carriers, clearly the network overlap is set to grow – by S17 it will be interesting to see if any of the carriers withdraw from this head-to-head competition and, if so, in which markets…