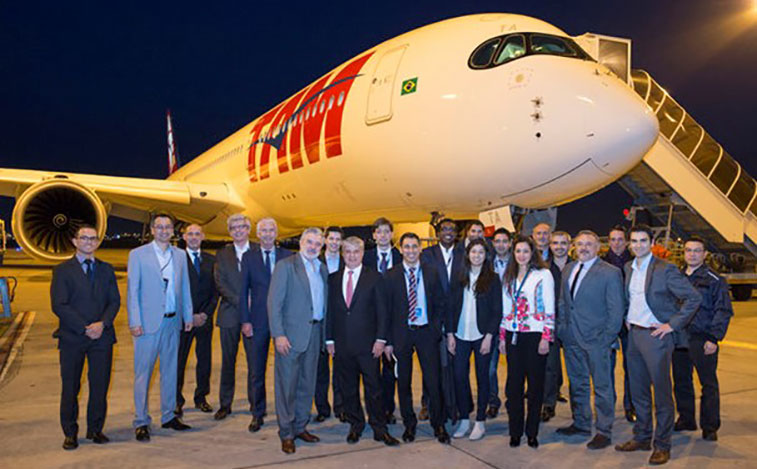 On 18 December, LATAM Airlines Group, made up of LAN Airlines and TAM Airlines, took delivery of its first A350. In doing so, TAM Airlines becomes the first airline in the Americas to operate the all-new airliner and the fourth worldwide after Qatar Airways, Vietnam Airlines and Finnair. Roberto Alvo, CEO of International & Alliances, LATAM Airlines Group, commented at hand over by saying: “Adding this aircraft into our fleet not only proves our commitment to maintaining one of the youngest and most modern fleets in the world, but it also strengthens our relationship with Airbus, a true partner with whom we have grown in the last decades.”

Following 132 airframes being handed over in November, Airbus and Boeing maintained their delivery performance in December by distributing the same total of aircraft to various customers. Nonetheless, the result for the last month of the year was down 19 units from the 151 that were delivered in the same month of 2014. Besides this fact, the European manufacturer for the first time in 2015 delivered more units that its North American counterpart, and did so in style, by distributing 26 more aircraft, the second biggest gap of the 2015 delivery race (Boeing delivered 28 more aircraft that Airbus in September). Overall, the result means that Airbus has in total for 2015 delivered 635 units, but even with a last minute push to get aircraft to customers, Boeing still won the 2015 race by handing over 758 to its clients. The result means that last year the North American manufacturer handed out 123 more aircraft that its European counterpart.

During 2015, Airbus and Boeing tied when it came to single-aisle unit deliveries, with each handing out 492 units. This means that overall for 2015, 984 single-aisle aircraft were delivered to various customers around the world. The table below further demonstrates the delivery breakdown of single-aisle variants in 2015 from Airbus and Boeing.

As can be seen from the table, after handing over 17 more single-aisle units in December, Airbus managed to equal the amount of aircraft delivered by Boeing last year. During 2015, the North American producer handed over more aircraft than Airbus to its customers for seven months, while the European manufacturer had four months of being the dominant distributor, while both companies matched each other on deliveries during May.

As a result of Boeing and Airbus drawing in the 2015 delivery race for single-aisle units, it means that the North American manufacturer has distributed 123 more wide-body aircraft to its global clients. The table below shows the 2015 break down of wide-body units from the two companies.

The only month of 2015 which witnessed Airbus deliver more wide-body units than Boeing was in December, with the European manufacture distributing nine extra aircraft than its North American counterpart. January, June and October were the only months of last year where Boeing did not have a double-digit advantage in wide-body deliveries over Airbus.

Having delivered more than 100 aircraft for the eleventh month in 2015, the two manufacturers have once again recorded an impressive total. The combined deliveries of both producers for the final month of the year was 132, of which 79 came from Airbus and 53 from Boeing. Notably, the American manufacturer has not performed as well in December when compared to the same month as last year, when the company delivered 76 units. Airbus on the other hand delivered four more aircraft last month than it did in December 2014. Overall 70% of deliveries in December were narrow-body aircraft, with the remaining 30% wide-body of course. However when looking at the wide-body market for December, Boeing produced 38% of the aircraft (down from 67% last month), while Airbus produced the remaining 62%. 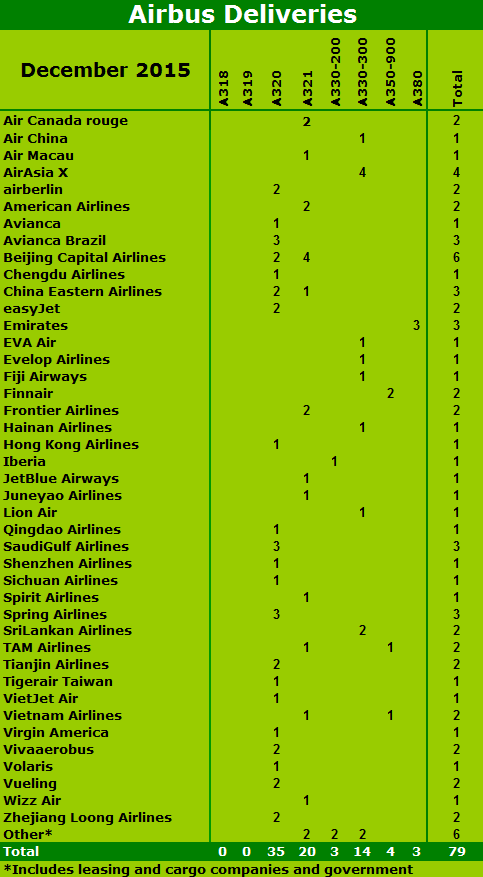 Airbus ended December with a total of 79 units being delivered to airlines, which is 18 more airframes than what the company delivered in November. Overall in 2015, the European producer delivered 635 units, representing an increase of six units when compared to its performance in 2014.

For the month of December, single-aisle deliveries were led by the A320 (35 units), while the A321 followed in second place (20 units), with a grand total of 55 single-aisle aircraft being provided to carriers around the world (up eight when compared to last month). This means that Airbus produced 17 more narrow-body aircraft than Boeing in December. A total of 21 airlines received A320s last month (up one from November), including new carrier SaudiGulf Airlines, which in December had three A320s delivered. In relation to A321 deliveries, 12 airlines picked up the variant, with Beijing Capital Airlines picking up four of the type, while Air Canada rouge, American Airlines and Frontier Airlines were each delivered two.

Looking at wide-body deliveries, Airbus handed over 24 airframes in December, 10 more units than November. Following on from the delivery of four A380s in November, the European producer handed over three in December, with all of them going to Emirates, the world’s largest A380 operator. December also marked the first carrier from the Americas to be delivered an A350-900, with TAM Airlines collecting its first aircraft of the type on 18 December. Airbus also delivered two A350s to Finnair ,while Vietnam Airlines also collected one of the variant. 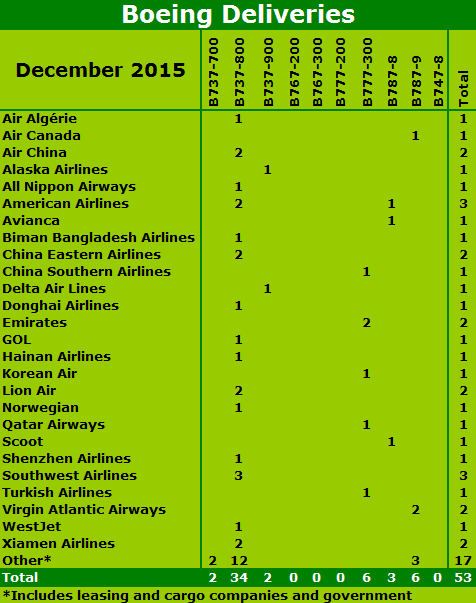 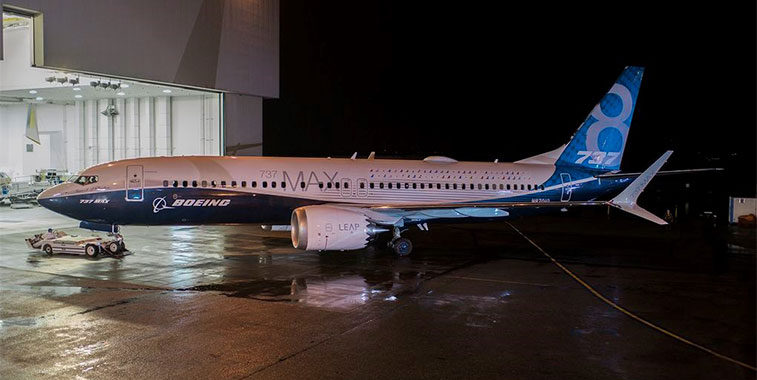 On 8 December, Boeing unveiled the first 737 MAX 8 flight test aircraft in a low-key employee- and supplier-only ceremony. Boeing promises that the 737 MAX 8 will be 20% more fuel efficient than the 737 Next Generation aircraft they replace. As of November 2015, 2,827 have been placed for variants of the 737 MAX, from a total of 41 airlines and leasing companies.

Airlines received a total of 38 single-aisle units from Boeing in December, five less than November. A total of 34 737-800s were delivered, while only two 737-900s were received by its customers. Southwest Airlines was the largest recipient of the 737-800 in December, adding three of the variant into its fleet. In total, 17 airlines were delivered single-aisle units from the American manufacturer during last month, one more than in November. Nonetheless, it should be noted that 12 737-800 deliveries were to leasing companies.

Analysis of wide-body deliveries reveals that Boeing handed over a total of 15 units to airlines in December, 13 less than in November. The result also shows that the American producer delivered only half the total of wide-body airframes than it did in the same corresponding month of 2014 (31 units). Boeing handed over nine 787s in December, five less than in November. Virgin Atlantic Airways was the largest recipient of the 787-9, picking up two of the type, while three went to leasing companies. American Airlines, Avianca and Scoot each collected one 787-8. It’s also worth noting that no 747-8s were delivered in December, while four were delivered in November.